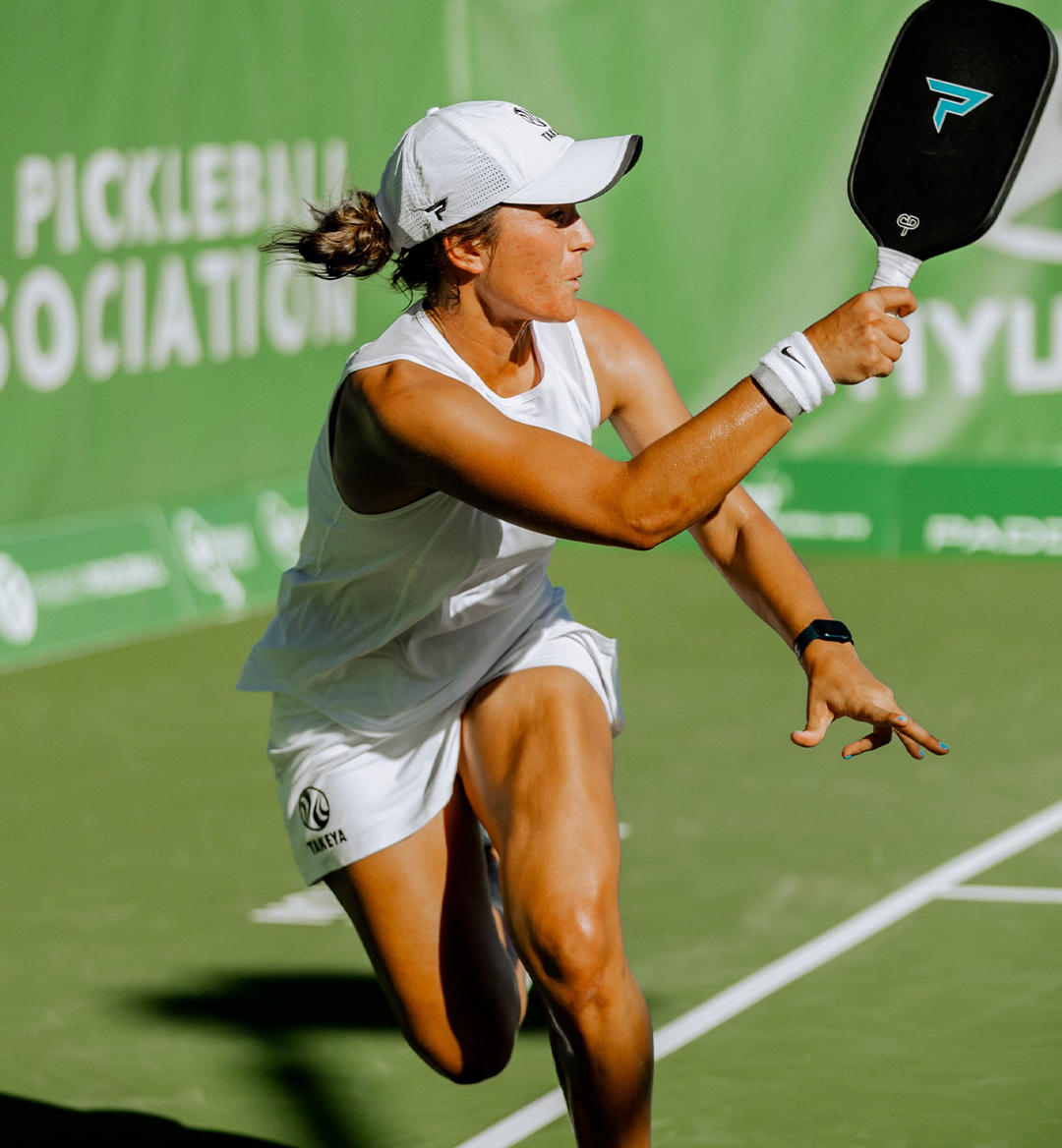 Catherine Parenteau is the best women’s pickleball player in the world. That sentence might not mean anything to you now, but it will soon. For the uninitiated, pickleball is the fastest growing sport in the country. The elevator pitch is deliciously simple: tennis, but smaller. The rallies have a pitter-patter excitement, making it both a fun pastime and an enticing spectator sport. On a recreational level, pickleball has amassed a loyal following, growing outward from its base of Sun Belt retirees and branching into the general public. At the top of the professional ranks, a superstar class is forming—led by Ben Johns on the men’s side and Parenteau on the women’s—and driving the sport forward.

Beyond her playing career, Parenteau runs a burgeoning web of businesses that touches different corners of the pickleball world. With Paddletek, she sells her own line of pickleball paddles and apparel. Between tournaments, she hosts clinics and training sessions.

The 27 year-old Parenteau is part of the wave of high-level athletes who have taken over the pro pickleball scene. Originally from Montreal, Parenteau earned a scholarship to play college tennis at the University of Arkansas before transferring to Michigan State, where she was introduced to pickleball by Simone Jardim, the Spartans’ tennis coach who moonlights as a pro pickleballer. While pickleball started as an improvised lawn-game, it has now begun to attract elite athletes and uber-talented former tennis players. The future of the sport of the future is here—and it looks a lot like Catherine Parenteau.

This week, ONE37pm sat down with Parenteau to talk about transitioning from tennis to pickleball, competing against her mentor, and what pickleball will look like in five years.

Catherine Parenteau: I was in my fifth year at college at Michigan State in 2015 and I had run out of eligibility because I already competed for my first four. Although I couldn’t play, I still liked to be around the team because I missed competing. One day my head coach, Simone Jardim, who’s also a very good pro pickleballer, realized that I was kind of sad being on the sidelines and suggested that I pick up pickleball. Initially, I was resistant because “pickleball” sounded kind of strange, but once I picked it up, I found love for the sport right away.

ONE37pm: What is it that you loved so much about it?

Catherine Parenteau: I love how fast the game is—a lot of the time, you get into very quick-handed rallies and that’s always been one of my favorite things. At first, I struggled with the urge to want to always hit the ball really hard like I would in tennis, but over time I learned how to incorporate more of the soft stuff into my game.

ONE37pm: What has it been like to compete against your former coach?

Catherine Parenteau: It was actually super tough at the beginning to remember that we weren’t on the same team anymore. Right when I was first getting good, there weren’t a ton of women players and I ended up having to face her at just about every tournament, so I had to eventually learn to get over the weirdness of going against her. Now, I would say that I’ve learned to put up barriers where whatever happens on the court, stays on the court and then we talk afterwards. After I beat her the first few times, she would sometimes joke that she never should’ve told me about pickleball, but she was always kidding. [laughs]

ONE37pm: Have you noticed the growth of the sport since you began playing?

Catherine Parenteau: Definitely. It’s crazy because a lot of the time when I used to travel three or four years ago, people would come up to me and ask me about my paddles because they’d never seen them before. Even in the security line, they’d be confused why I was traveling with a bag full of paddles. Now, though, when people come up to me, a lot of them seem familiar with the sport and a lot of them play it themselves.

ONE37pm: What do you think the future of pickleball looks like?

Catherine Parenteau: The really cool thing has been seeing how many more kids are getting involved. When I would host my clinics last year, there would be basically no children. Then, I would say that sometimes I’d see parents bring their kids along. And now, it feels like every clinic we have has at least a few kids. At tournaments too, I see lots of kids and their families and it’s always super sweet to sign their balls and see that they’re getting into the sport.

Hopefully, pickleball grows to the point where it’s played at universities. If you can get a scholarship to play tennis, why can’t you get one for pickleball too?