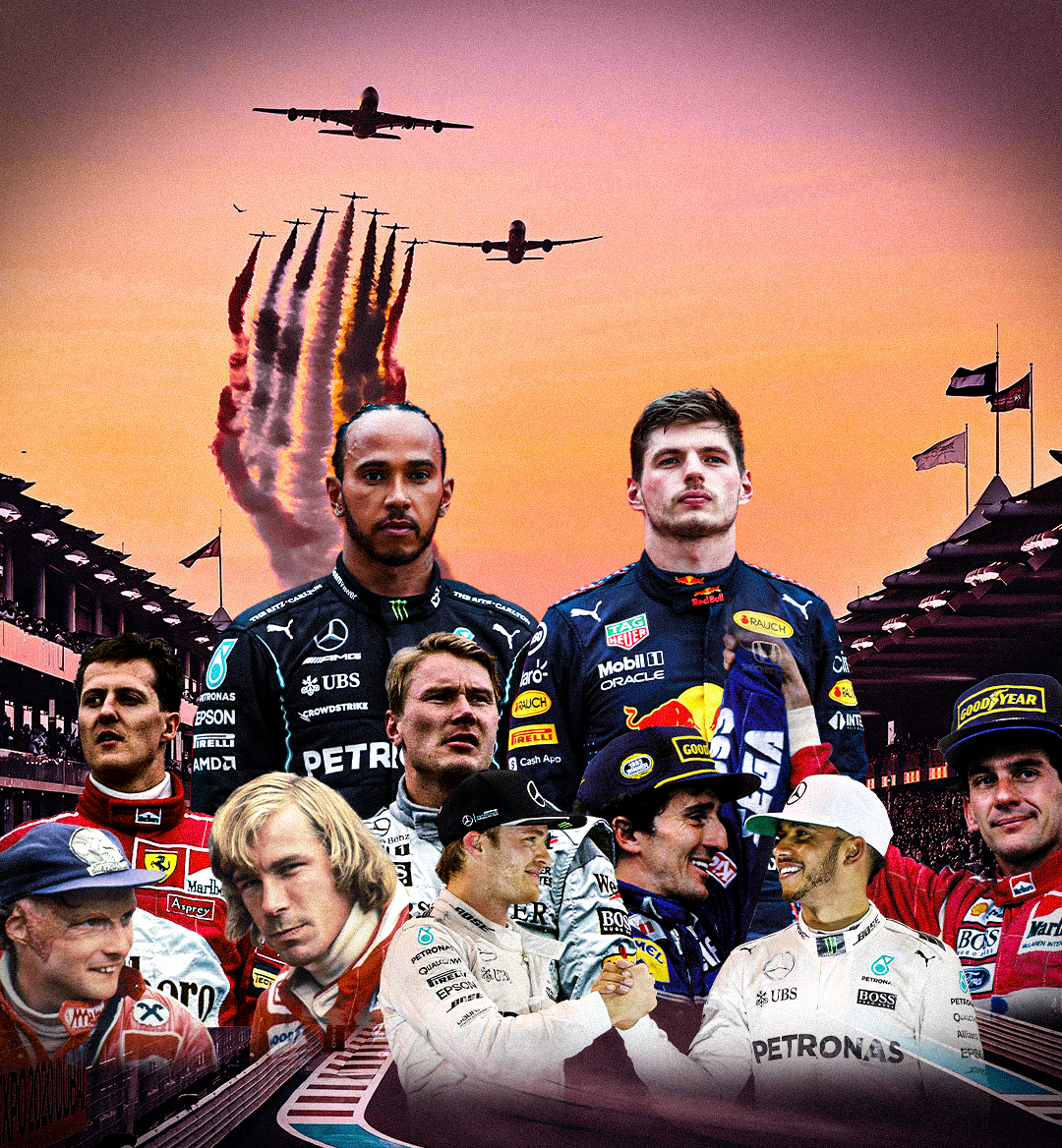 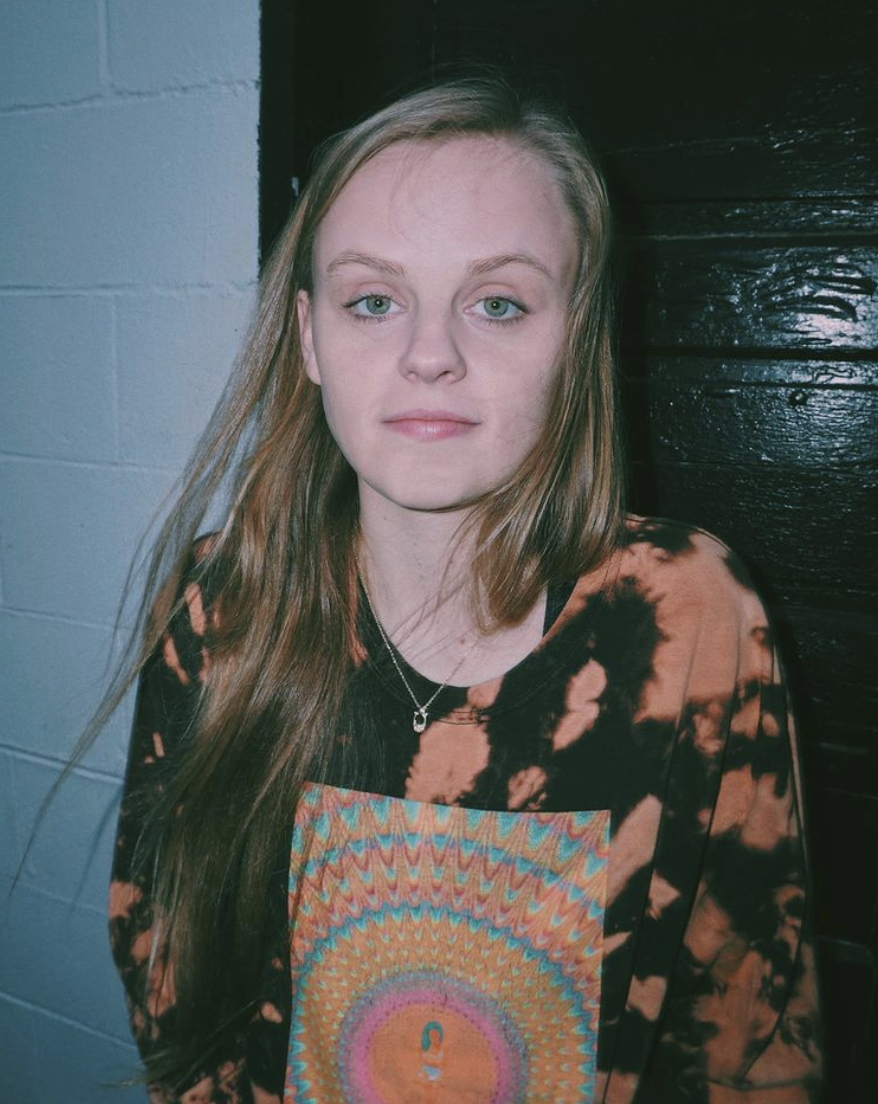 Formula 1 rivalries date back to the beginning of the sport in 1950. Many of these rivalries take place both on and off the track. Some have been fought fairly, others not so much. However, all of them include some of the greatest Formula 1 drivers in the history of the sport.

Many of these rivalries have been the deciding factor in world championships throughout the years. These are F1's five most iconic rivalries from 1975 to the present day. 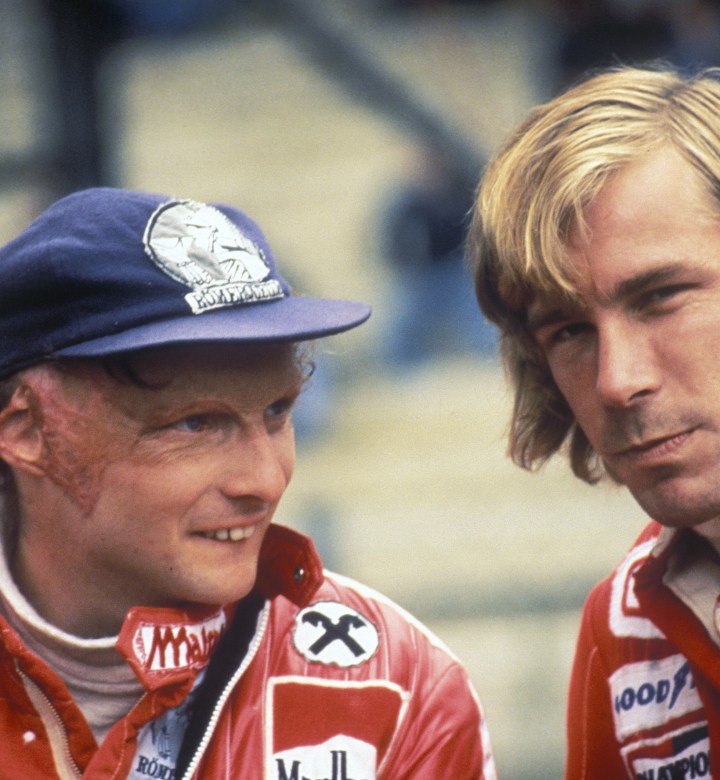 James Hunt and Niki Lauda grew up racing each other through the junior ranks before the two moved up to Formula One. Before they became rivals, they even lived together! However, in 1976, the two former roommates battled for the title.

In 1975, James Hunt would take his first world championship title at the Dutch Grand Prix, which he would later say was the race of his life. To start the next year, Lauda dominated the first six races, taking four wins, while Hunt claimed the other two.

At the German Grand Prix on August 1, 1976, Niki Lauda lost control of his race car and crashed into the wall on a bend. The race car burst into flames and bounced back onto the middle of the race track, where Lauda was struck by another race car.

Although Lauda made a miraculous comeback from his near fatal accident in time for the Italian Grand Prix, Hunt had closed the gap between the two during Lauda's absence. Entering the last race of the season at the Japanese Grand Prix, Hunt trailed Lauda by only three points.

Hunt won the Japanese Grand Prix, giving him the 1976 world championship title over his rival. In the 1977 season, Lauda bounced back to win his second world title and then added a third title in 1984. 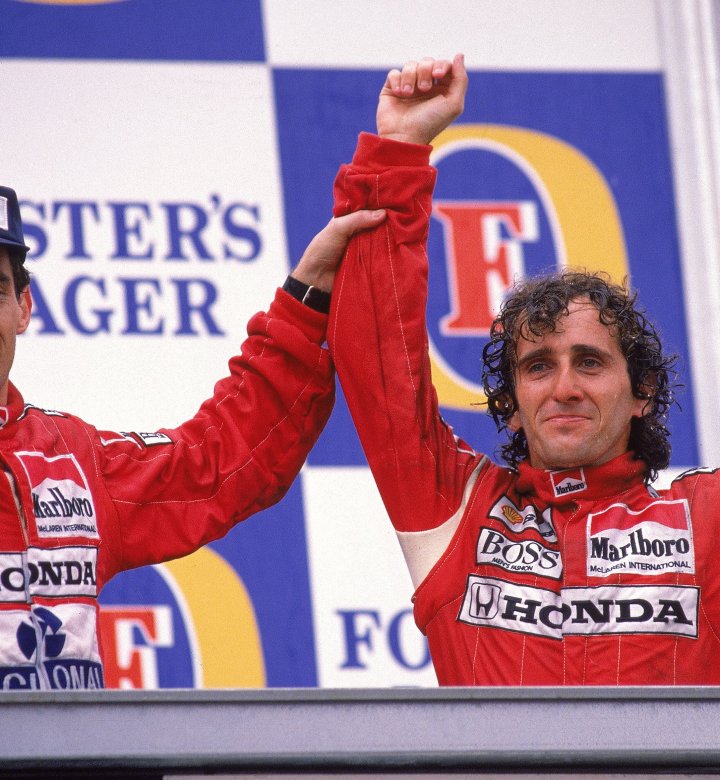 Throughout the 1980s and 1990s, the rivalry between Alain Prost and Ayrton Senna was the defining F1 rivalry of an entire era; the pair combined to win five of six championships between 1988 and 1993 and seven of ten from 1984-1993. Senna rivalry began in 1988 once the two were paired as teammates on McClaren. Despite being teammates on the McClaren-Honda team at the time, Prost and Senna became bitter rivals as they emerged as the clear two best racers in the world.

Entering the 1988 season, Prost was considered the overwhelming favorite to claim the championship, but Senna unseated him, thanks to his daring, inventive driving style. In the 1988 Japanese Grand Prix, Senna’s engine would stall causing him to fall back to 14th place. Over the course of four laps, Senna managed to make up ten places. He eventually caught up to Prost and won the race, giving him his first world championship. Off the track, tension began to simmer between the two, with Prost accusing McClaren of giving Senna preferential treatment.

In the following 1989 season, Senna and Prost would again exchange wins. By the time the Japanese Grand Prix rolled around, tensions were at an all time high. On lap 47 of the race, Senna made a move on Prost leading to a crash. While Prost hopped out of the car, Senna pushed his car back on track and got himself back into the race. Senna was disqualified by the FIA by the time he crossed the finish line. Due to this disqualification, Prost won the world championship and decided to leave McClaren to join Ferrari.

Accordingly, the 1990 season marked the most intense chapter in their rivalry. Entering the Japanese Grand Prix, the two of them were once again neck-and-neck for the crown—Senna could secure the crown by finishing ahead of Prost or if the pair both crashed out. On the first turn of the race, Senna made an aggressive move to try to overtake Prost, but collided with his nemesis, disqualifying them both from the race. Since neither driver finished the race, Senna won the world championship. After the race, Prost seethed that Senna was "disgusting...and a man without honor."

In the 1993 season, Prost joined Williams as a driver. However, in this contract there was a statement stating Senna could not join him as a teammate. After winning the 1993 world championship Prost would retire from Formula One, ending the rivalry. In 1994 Senna crashed at the 1994 San Marino Grand Prix where he was pronounced dead a few hours later. With their rivalry put to the side, Prost would end up being one of the men to carry Senna to his resting place. Many Formula One fans nominate this rivalry as the greatest in history. 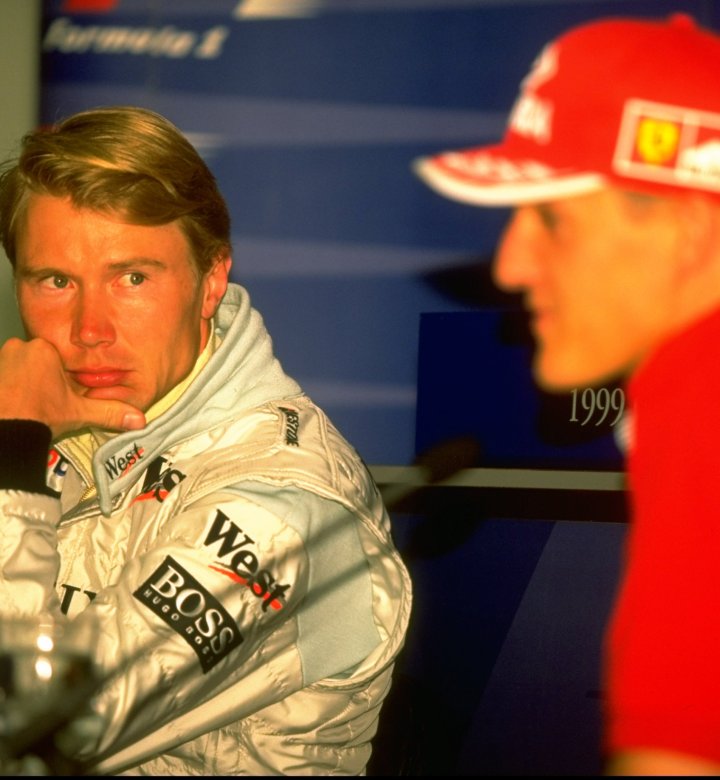 Despite winning a record seven world championships, Michael Shumacker faced a stiff challenge from Mika Hakkinen. While the two competed fiercely, they never betrayed their rivarly off the track, a rarity in the intense F1 world. .

Even before the pair reached F1, Schumacher and Hakkinen engaged in heated races, most notably in the 1990 Macau Grand Prix Formula Three. A crash late in the race caused victory to slip away from Hakkinen. During the 1998 season, the two entered Suzuka essentially tied at the top of the standings. Schumacher had terrible luck during this race with a stall on the pole that ultimately led to Hakkinen winning the title.

In 1999, Schumacher broke his leg in a crash, forcing him to sit out a total of six races. When he returned, he managed to take pole position in Malaysia. Despite Schumacher's quick comeback, Hakkinen would win back to back world titles.

However in the 2000 season Schumacher got his revenge, pipping Hakkinen in Suzuka to claim the title. From that moment forward, Schumacher and Ferrari would dominate the next few seasons. Hakkinen retired from Formula One in 2001. 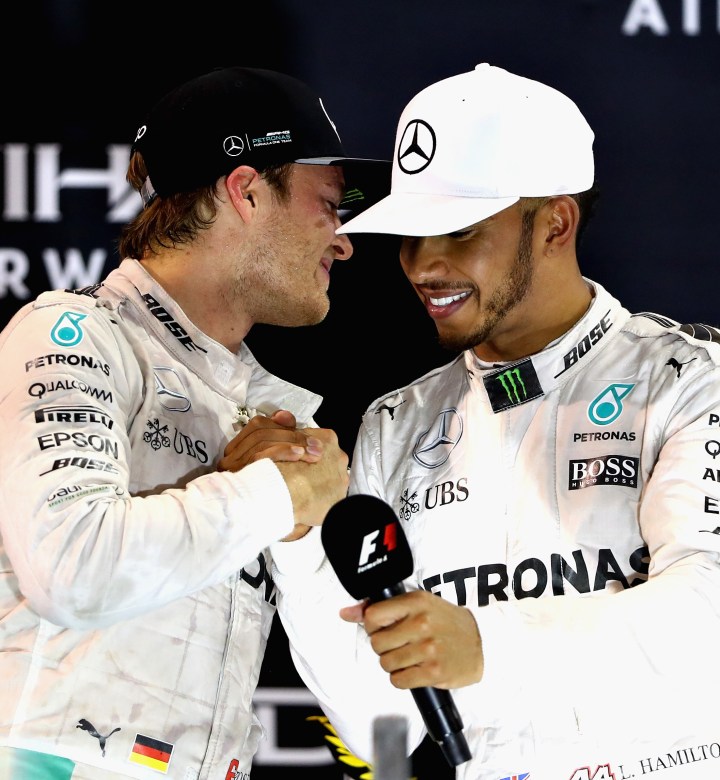 Hamilton and Rosberg grew up racing each other since they were karting and became friends over the years as a result. Lewis Hamilton is widely considered the GOAT of Formula One, racking up more wins than any other driver in history.

During their first season together in 2013, Hamilton finished ahead of Rosberg. Although Rosberg had more experience, Hamilton was the more technical and tactical driver, perfecting the art of tire preservation, driving in wet weather and overall racecraft.

Similarly, Hamilton took the 2014 and 2015 championships over Rosberg, further increasing tensions between the two. The two battled at the 2014 Bahrain Grand Prix as well as in Spain when the two made contact. In 2016, Rosberg would finally take the title, capitalizing on a few poor starts from Hamilton.

Over the fours years the two raced together, Hamilton scored a total of 1334 points while Rosberg scored 1195.

After the 2016 season, Rosberg announced his retirement from the sport, ending his career on a high note. 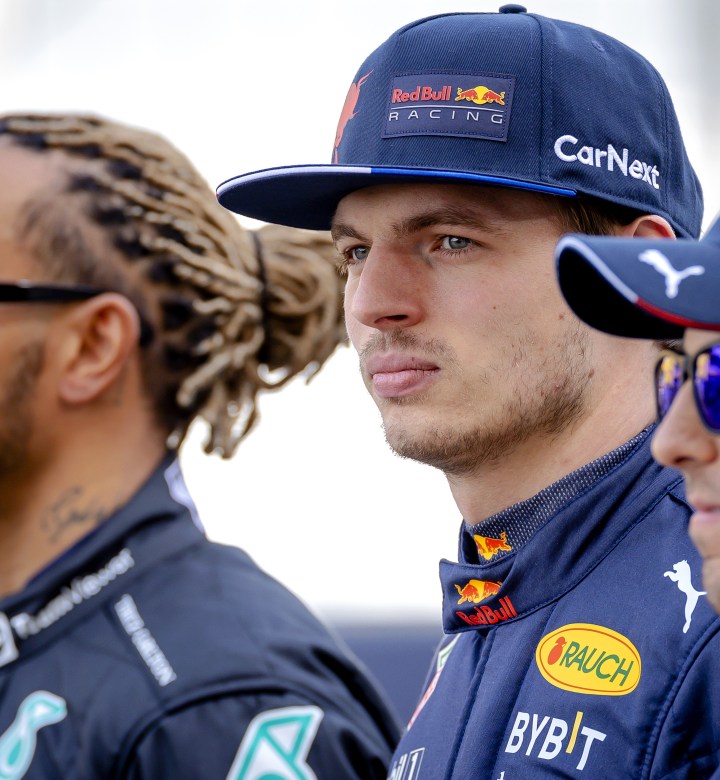 Following Rosberg's retirement, Max Verstappen emerged as Hamilton's primary rival in 2017. In the beginning of this rivalry, the two only had small encounters while Verstappen was aiming to win a few races a season and Hamilton had his eyes on the title for himself and for Mercedes.

Since then, the rivalry has elevated to crashes and constant drama between Mercedes and Red Bull. Most recently, controversy around the last race of the 2021 season has added fuel to the fire.

By the time the accident was cleared from the track, that decision was changed to allow the five cars in between Lewis Hamilton and Max Verstappen to unlap themselves. This left Verstappen right behind Hamilton with a brand new set of tires. While Hamilton put up a fight, Verstappen would end up overtaking the Mercedes car to clutch his first world championship title.

As the 2022 summer break approaches, it will be interesting to see where these two take their rivalry throughout the rest of the season.