Jimmy Butler Is Too Much for the Boston Celtics 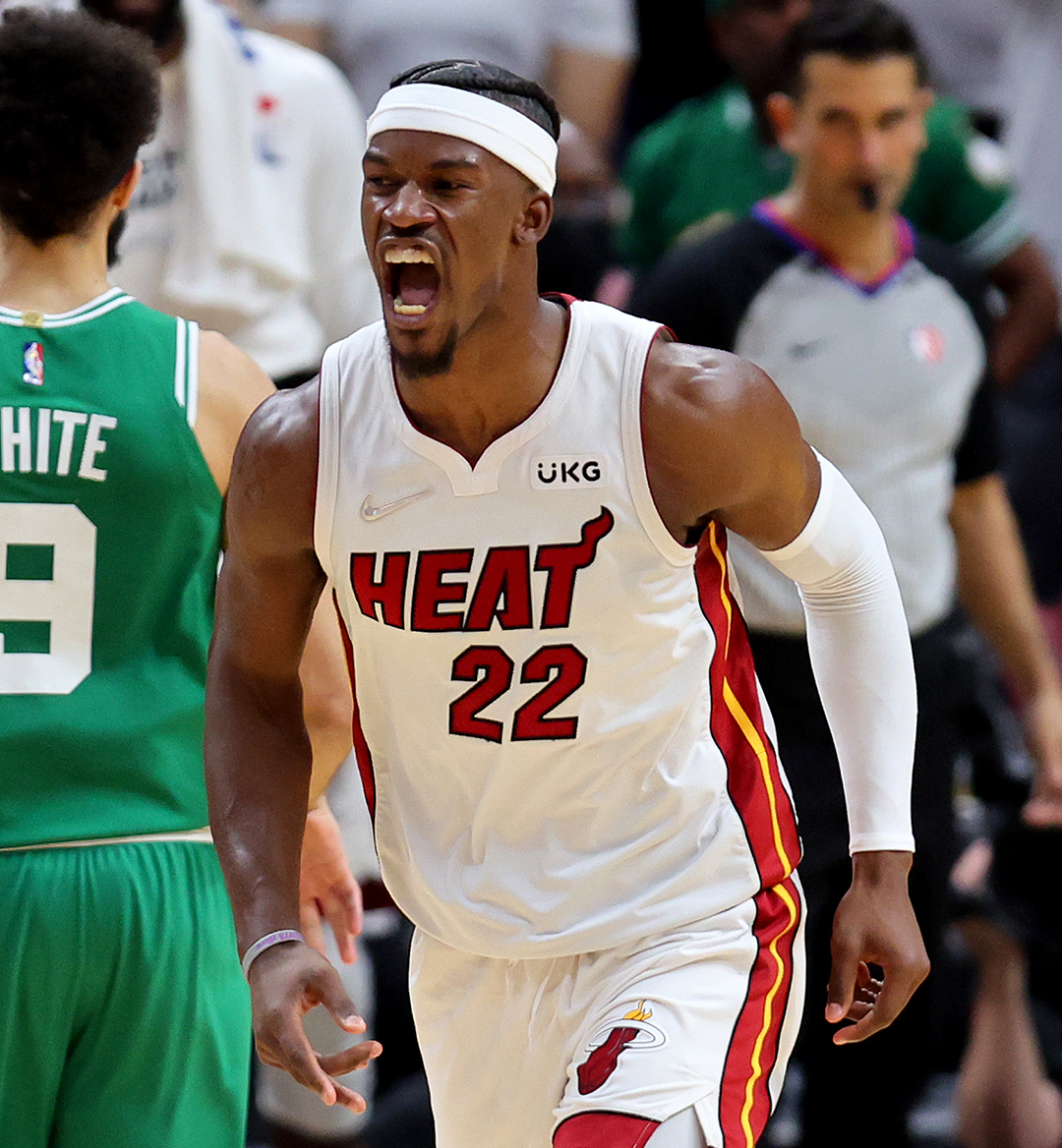 Jimmy Butler traffics in excess. No one person needs a 6000-pound, boombox fish tank; there’s no earthly reason to show up to work seven hours early. Even more than Patrick Beverley or Dillon Brooks or Trae Young, Butler is the league’s primo shit-stirrer, an indomitable jerk who has no compunctions about masking his jerkiness. “Tobias Harris over me!?” he howled into the ether after the Heat thoroughly crunched the Sixers into a fresh wave of existential crises. “You can’t win without me,” he barked at his, uh, teammates and coaches in Minnesota. He’s too much, too much of the time—and now it’s the Boston Celtics’ turn to reckon with it.

Against Boston, Miami reaffirmed their status as the NBA’s resident grinch; they don’t so much beat teams as exsanguinate them, draining the life-force out of their opponent and leaving only a grumpy carcas. After getting shelled by Jayson Tatum in the first half, Butler and the Heat ripped off a torrid 39-14 third quarter to seal a 118-109 series-opening win. During the third quarter alone, Butler contributed 17 points (on five shots) and three steals as part of the rabid Miami defensive effort that provoked six turnovers from Tatum. Overall, Butler chipped in 41 points, nine rebounds, five assists and four steals. He was the best player on the court. For the game’s final 24 minutes, he was conceivably the best player in the world.

This is simply what Jimmy Butler does—in basketball talking-head parlance, he “controls the game.” More than his sturdy 6’8 frame or productive psychopathy, Butler’s superpower is his poise, his galvanizing clarity of purpose. Possessing an uncanny ability to function completely on his own terms, he doesn’t just bend the flow of his game to his will; he manifests his own vision for how the game should—and will—be played. He plays with a drummer’s understanding of tempo, setting the rhythm and cadence for the other nine players on the court. Sensing that the Heat needed a jolt after halftime, Butler stalked passing lanes and hunted for early offense in the third quarter; nursing a lead in the fourth, he iced the game by hunting matchups and getting buckets in isolation.

On a Miami roster that’s broadly prioritized an institutional over hyperbolic individual skill, Butler at once transcends and fits within “Heat Culture.” Whereas his teammates are largely specialists —PJ Tucker is a chesty stopper, Tyler Herro is a zippy off-the-dribble shooter—Butler is the load-bearing figure in Miami’s offense, pacing them in both scoring and assists.

While Butler won’t rummage through a Never-Full and pull out a complicated dribble combo, he gets sturdy. In Game One, Butler bullied his way to 18 free throws, largely because no Celtic was strong enough to withstand his drives without fouling. Whereas other elite offensive hubs have a kind of weightless ease to their game, Butler boasts a tremendous physical gravity, inviting contact which he can then power through. Nearly everything is off two feet; he’s never off-balance or out of sorts. Just watch him plow through Robert Williams’ chest with a jump-stop for a dunk or shed Jaylen Brown with a forceful last step for evidence.

In these playoffs, Butler has leveled up into a nearly 30 point per game scorer by leaning on his strengths, both figuratively and literally.  For the postseason, he’s averaged 15.0 drives per game and scored 9.4 points per game from those forays, compared to 13.4 drives and 7.6 points during the regular season. He’s upped both his volume (6.7 possessions versus 4.3 in the regular season) and efficiency (1.26 points per possession vs .92) as a pick-and-roll ball-handler. Additionally, he’s even become a confident shooter, taking 4.2 threes per game after sandbagging through the regular season.

As such, Butler is not dissimilar to Lebron James or Luka Doncic in function, if not form.  He’s a superstar, despite his general scruffy vibe. Most of the pre-series chatter was oriented around Jayson Tatum’s star-turn and place in the league, but that discussion is probably missing the real point. Jimmy Butler is the face—no, Big Face—of the NBA playoffs.