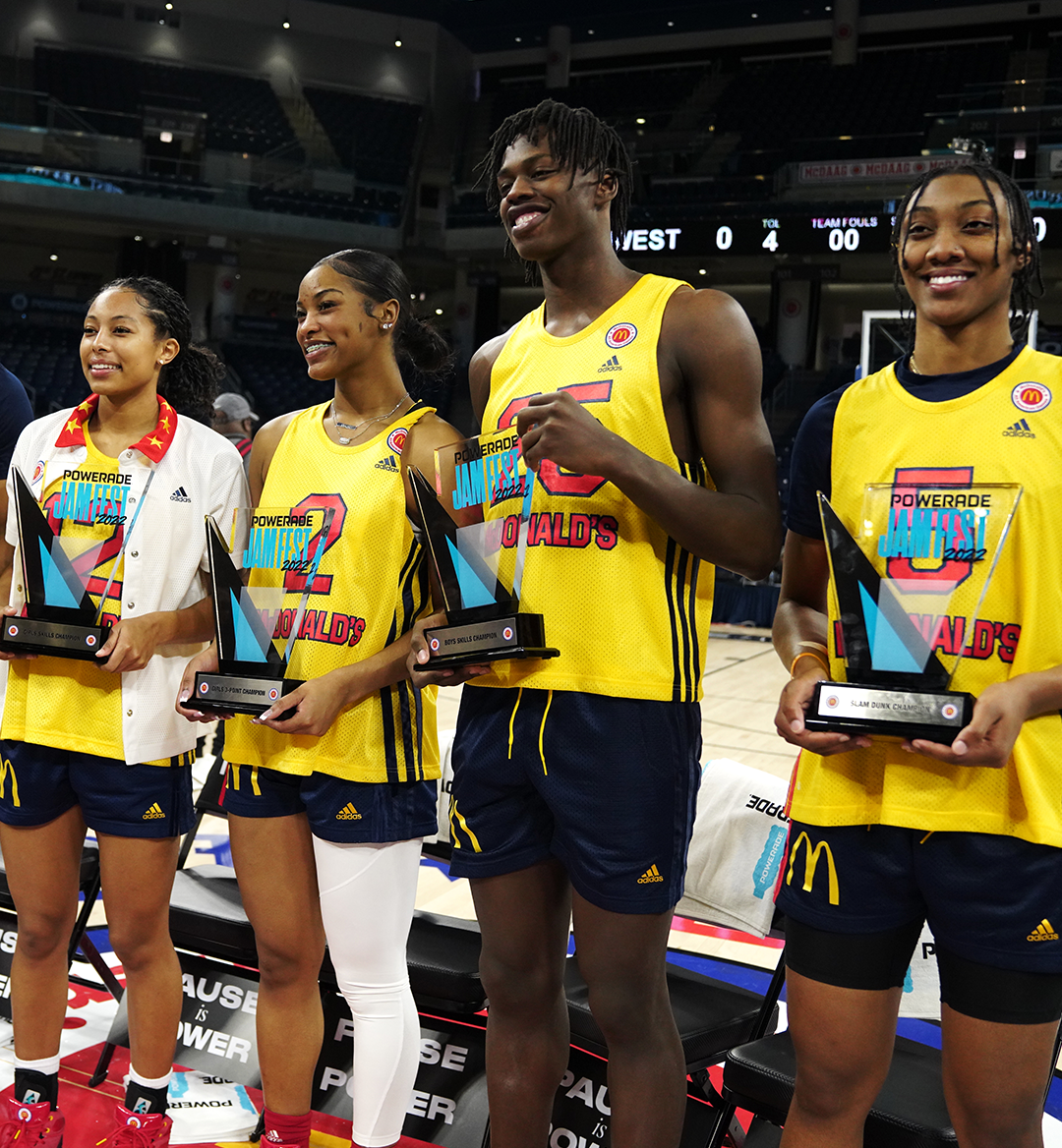 On Monday, March 29th, the future of basketball took the stage for the first night of events at the McDonald’s All-American Powerade Jam Fest. The opening night of events showcased a skills challenge, three-point contest, and dunk contest similar to the structure of the NBA’s Saturday night all-star event. Here is our recap of the 2022 high school basketball all-star event.

The skills challenge for the girls consisted of four competitors. The first-round matchup saw future Wildcat Paris Clark go up against future Bruin Gabriela Jaquez. In a tight race, both girls got to the final three-point shot at the same time but Clark was able to knock it down first and advance. The other half of the bracket saw Stanford commit Indya Nivar face off against future blue devil Ashlon Jackson. Nivar was able to get out to an early lead and secure the win by making her first three-point attempt.

The championship match was set and Paris Clark faced off against Indya Nivar for the right to be named the girl’s skill challenge champion. In the championship round Nivar shot out of the gate to an early lead weaving through the Powerade obstacle course, but Clark was able to tighten the gap by the last shot. Clark’s efforts weren’t enough however, and Indya Nivar took home this year's skills challenge for the girls.

The first round of the boy’s skills challenge saw Duke commit Mark Mitchell go up against UCLA commit Amari Bailey. Bailey was a little slow out of the gate weaving through the Powerade obstacle course, and Mitchell took advantage, winning this round handily. In the second matchup we had Villanova commit Cam Whitmore compete against future Razorback Anthony Black. Black got out to a fast start and it looked as though he would come out on top, but Whitmore just elevated to another level to sprint back into it. Whitmore would ultimately advance.

The boy’s championship round was set and Cam Whitmore would face off against Mark Mitchell. Mitchell got out to an incredible start and it was all over from there. Mitchell was able to get to the final three-point shot first and knocked it down on his first attempt, crowning him this year's boy’s skills challenge winner.

The three competitors for the girl’s three-point contest were Oregon commit Chance Gray, Notre Dame commit K.K. Bransford, and Ashlon Jackson who also participated in the skills challenge. Ashlon Jackson made her lethal three-point shooting known, dominating the competition with the highest overall score of the night securing 18 points. The loudest the arena got all night was easily when Jackson got to her last two racks and started knocking down a string of shots. It was incredible to see all the other McDonald’s All-Americans get on their feet and support Jackson down the stretch of the competition.

I thought Gradey was gonna rack it up… you know, he missed a couple shots, and then I was able to win

The dunk contest this year had six total participants. The four boys participating were Dillon Mitchell, Chris Livingston, Nick Smith Jr., and Jordan Walsh. The two girls participating alongside the boys were Ashlyn Watkins alongside Ayanna Patterson. There was a litany of perfect dunks awarded a 60 score by the panel of judges. Distancing themselves from the rest of the field, Smith Jr., Watkins, and Mitchell advanced to the final round. Ashlyn Watkins secured this year’s dunk contest with a powerful alley-oop jam off the backboard. Watkins became the second winner of the dunk contest for the girls in back-to-back years, a truly outstanding achievement.