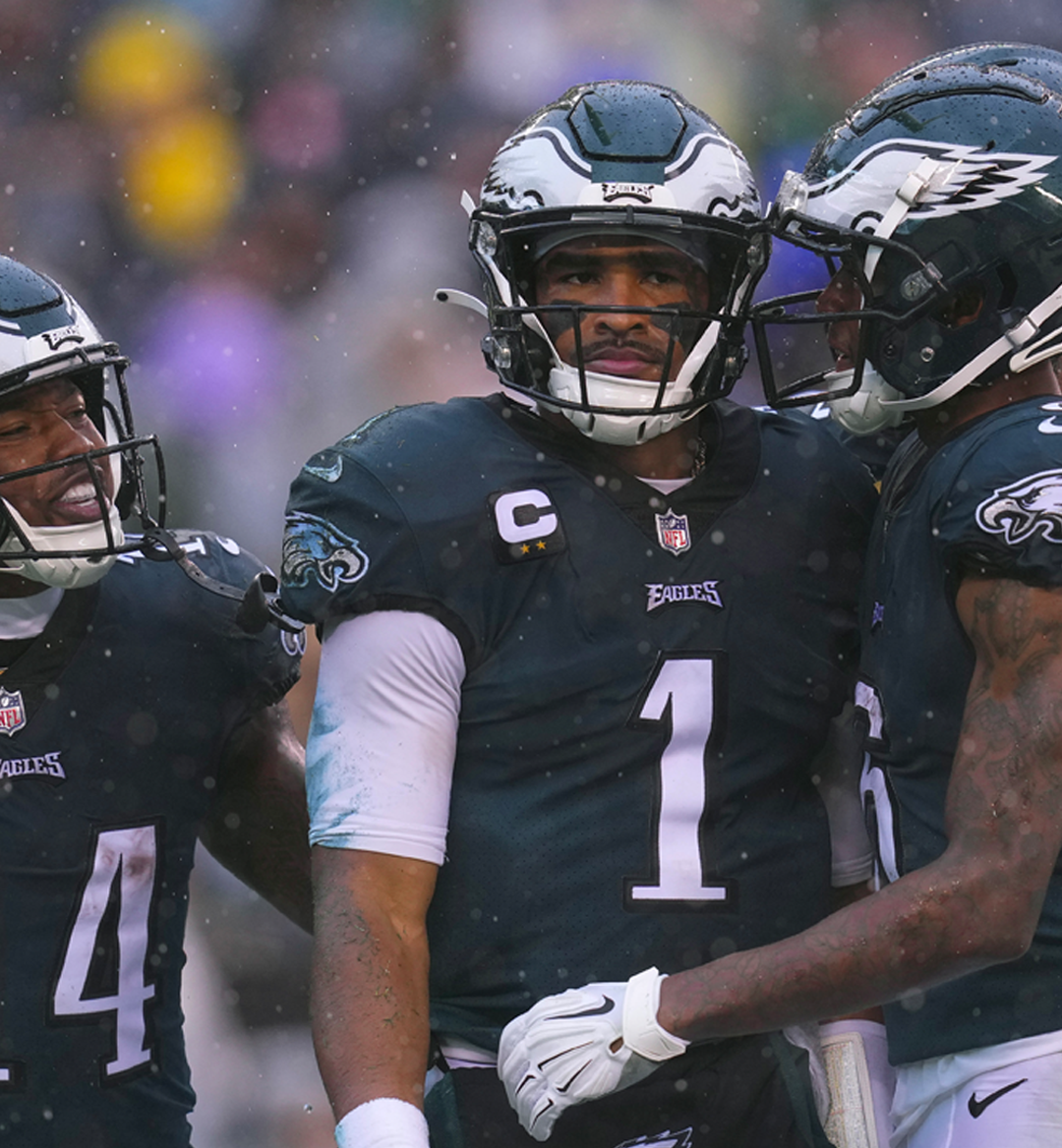 Following the NBA's lead, the NFL Trade Deadline has become a marquee event on the league's calendar. While the NFL Trade Deadline has historically been pretty slow, it kicked into high gear this year with star players like Christian McCaffrey, Roquan Smith, Bradley Chubb and Calvin Ridley all switching teams. As such, the tremors from these trades will have grand, league-wide implications. Luckily, we're here to help you sort through the mess. These are the 100% accurate Week 9 NFL Power Rankings.

By waxing the Pittsburgh Steelers 35-13, the Eagles left little doubt that they’re the best team in the NFL through the first two months of the season. With a very soft schedule coming up in which they should be favored in nine of their last 10 games, it’s becoming an increasingly real possibility that the Iggles become the first 17-0 team in NFL history.

In what felt like a symbolic passing of the torch, Josh Allen and the surging Bills faced off against Aaron Rodgers and the flagging Packers. The result? Carnage. Outside of a two-point loss to the Dolphins in Week 2, the Bills have been unrelentingly excellent, boasting the league’s best point differential.

Despite being one of only eight teams to have a bye week so far, the Chiefs still lead the NFL in points with 223. Patrick Mahomes is a warlock.

In his second game back from a finger injury that sidelined him for four weeks, Dak Prescott looked as sharp as ever, tossing for 250 yards and two scores. Beyond Prescott, the rest of the Cowboys were buzzing as well—Tony Pollard contributed a career high 131 yards on just 14 carries in Ezekiel Elliot’s absence and Micah Parsons recovered a fumble for a 36 yard touchdown.

At some point, it’ll be worrisome if the Vikings continue to struggle to put away bad teams as they held on for a narrow 34-26 win against a bad Arizona Cardinals team. But wins are wins are wins and the Vikings have more of them than just about any other team in football.

With a 27-13 loss to the Seahawks, the Giants ended their impressively improbable (improbably impressive?) five-game win streak. For the first time all season, superstar running back Saquon Barkley was held in check—his 53 yards and 2.65 yards per carry are both by far his lowest marks of the year.

For the second straight year, the Ravens have been beset by injuries to some of Lamar Jackson’s most capable sous chefs—Mark Andrews and Rashod Bateman, the team’s two best pass catchers, are banged up, as is starting running back J.K. Dobbins. Thankfully, reinforcements have arrived: Roquan Smith, arguably the best off-ball linebacker in the NFL, arrived this week in a blockbuster trade with the Bears, shoring up Baltimore’s biggest defensive weakness.

Coming off a win against the red-hot Giants, Geno Smith and the Seahawks are no longer a novelty or some pitiable feel-good story. They’re a legitimately good team. With a 5-3 record, the Seahawks have pole position to win the NFC West, putting them ahead of putative contenders like the San Francisco 49ers and Los Angeles Rams.

Does any team have as many good players as the 49ers? In a key divisional showdown against the Rams, Kyle Shannahan unleashed Christian McCaffrey who became the first player since 2005 to score a rushing, receiving and passing touchdown in the same. As  the newest weapon in an arsenal of versatile, All-Pro caliber skill position players, McCaffrey is talented enough to make up for whatever deficiencies quarterback Jimmy Garappalo might present.

Justin Herbert has been limited by the fact that his ribs are basically floating around his chest cavity like a swan float in a swimming pool, so hopefully last week’s bye can help him—and the rest of the team—recover and get back on track.

When Tua Tagovailoa is healthy, the Dolphins are 5-0. Accordingly, the much-maligned third year quarterback has been stellar—he leads the league in passer rating, QBR and yards per attempt, proving that he’s much, much more than some noodle-armed game manager. To wit, wide receiver Tyreek Hill has racked up 961 yards already, putting on pace to become the first receiver to break 2000 yards in a single season.

Despite their torrid start to the season, the Jets once again lost to the hated New England Patriots. [*solemnly*] J-E-T-S! JETS, JETS, JETS!

As winners of the funniest, stupidest game of the season, the Falcons somehow find themselves in sole possession of first place in the NFC South after beating the Panthers 37-34 in overtime.

After winning four of their last five games leading into a Monday Night Football clash against the Browns, the Bengals got thrashed 32-13 by Cleveland. In the first game since Ja’Marr Chase went on the IR, the Bengals looked downright docile; all the downfield big-field chutzpah has seemingly evaporated. Against Cleveland, the Bengals’ porous offensive line was once again exposed as they allowed five sacks and mustered just 36 yards on the ground.

I don’t care that they’ve won five games in a row. This team isn’t that good, I’m sorry!!!

For the last decade, playing the Jets has been a consistently effective tonic for whatever ails the Patriots. On Sunday, the Pats seemingly put their self-created quarterback controversy behind them, leaning on their ground game and stout defense to put their divisional rival/little brother in their place.

Three weeks ago, the Commanders season looked doomed; now, it still looks doomed, but the vibes are a lot better. Led by backup quarterback Taylor Heinicke, the Commanders notched their third consecutive win, pulling themselves back up to .500. Even if this win streak is largely attributable to narrow victories against bad teams, Heinicke has been a steadying and mollifying presence for a team that was growing increasingly agitated and sour with Carson Wentz as the starter.

Divorce can be really tough on the kids. I hope Gronk is okay.

By losing their fifth game of the year, the Packers have guaranteed that their three-year streak of 13-win seasons won’t continue. During their current four game skid, Aaron Rodgers hasn’t even been able to crack 220 yards in any contest, illustrating the dire state of the Packers’ offense without Davante Adams.

Success in the NFL is tenuous—the only thing that separates last year’s Super Bowl champion Rams and this year’s craptastic edition is three or four offensive linemen. In a clear representation of the Rams’ struggles this year, they lost 31-14 to the 9ers, dropping them to 0-4 against teams who made the playoffs last year.

There’s still enough talent on this team to make you forget sometimes that Jacoby Brissett is their quarterback. On Monday against the Bengals, Myles Garrett dominated the game defensively while Nick Chubb did the same offensively, proof that the Browns still have gamebreaking talent when they can stay out of their own way.

Making his first career start, Sam Ehlinger was a solid, forgettable stand-in for the recently-benched Matt Ryan. Still, the Colts’ problems extend beyond swapping one mediocre quarterback for another. Namely, Jonathan Taylor has been unable to find any traction so far this season, dooming an offense that relies on him to move the ball and set up their play action passing game.

Like many teams in this clump, the Saints are a quarterback away from being good. Even as their salary crunch and the toll of time has atrophied some of their fearsome defense, the Saints are still staunch enough to pitch a shutout against strong offenses like the Raiders, as they did on Sunday. Similarly, their cup of skill position studs runeth over—Alvin Kamara and Michael Thomas are still playing  like historically good franchise cornerstones and rookie Chris Olave looks like he’ll be a historically good franchise cornerstone as well for years to come. The supporting cast is loaded, but it doesn’t matter much as long as Andy Dalton is the director.

If there were a merciful and just God, all Denver Broncos games would air at the crack of dawn on a paywalled streaming service and be played on the other side of the globe from me.

With or without steroids, DeAndre Hopkins is a monster. In his first two games back from a six game suspension, Hopkins has hoovered up 22 catches (on 27 targets) for 262 yards and a touchdown. To start the year, the Cardinals offense was unthreatening and unidimensionally reliant on Kyler Murray to make stuff happen, but the return of Hopkins restores some bite to the Cards’ passing game.

Even as the Raiders stumbled to a disappointing 2-4 start, the redeeming thing about them is that their offense was consistently great. And then, on Sunday, they got shutout.

The most active team at the trade deadline, the Bears shipped out star linebacker Roquan Smith and brought in promising wideout Charles Claypool in two separate deals. The upshot? Probably more of the same blah badness that’s characterized them for years. Still, Claypool is a very good and very young receiver who could form the bones of a good offense one day alongside Justin Fields, Khalil Herbert and Darnell Mooney.

This season is a bust. Junk it. Next year, though, could mark a genuine turnaround for Trevor Lawrence and the Jags once the newly-acquired Calvin Ridley returns from the NFL’s parlay jail. Ridley has an innate ability to get open, which will greatly aid Lawrence who hasn’t had the privilege of throwing to a receiver who can beat cornerbacks consistently in his first two NFL seasons.

Barring a miraculous turnaround, the Steelers are almost assuredly going to have their first losing season since 2003. All is not lost, however. Hometown hero Kenny Pickett has been spotty as a rookie but plays with an endearing ballsiness and has shown immediate chemistry with fellow rookie George Pickens.

The Panthers lost against the Falcons because they missed the go-ahead extra-point after their star receiver got penalized for celebrating a Hail Mary touchdown too aggressively. Here at ONE37pm's Week 9 NFL power rankings, we respect their commitment to the tank.

After getting mauled for 219 yards and a touchdown by Derrick Henry on Sunday, the Texans have now given up 200+ yards to Henry in their last four meetings. Curiously, they held onto veteran pass-catcher Brandin Cooks rather than fully gas up the tank for the second half of the season.

At least they almost covered the spread this week.