The 2019 NBA Draft Class and Their Hip-Hop Counterparts 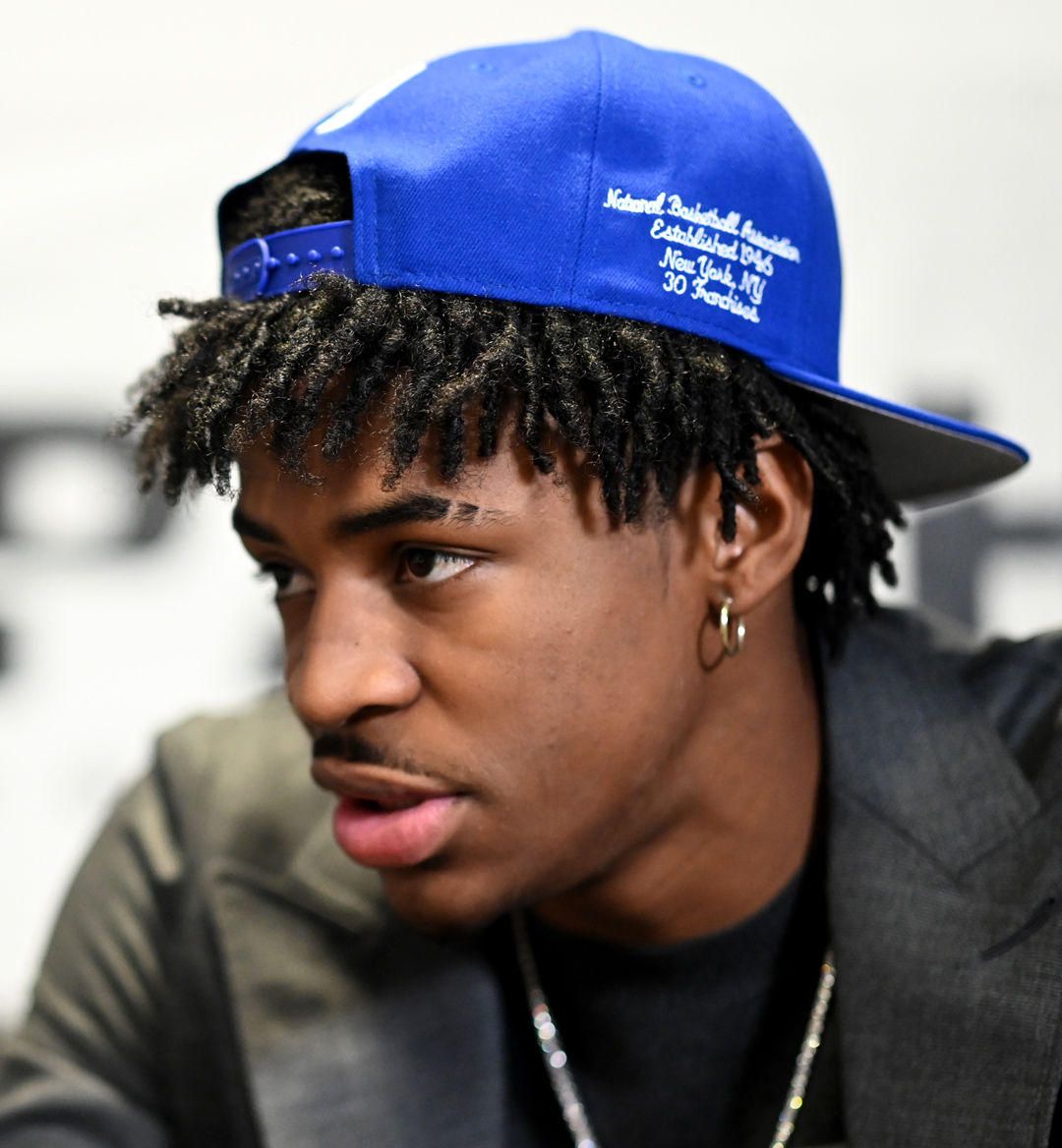 Tonight is the big night. More than 200 NBA hopefuls will be anxiously waiting to hear their names called. For those who are unfamiliar with this year’s NBA draft class, there are some dark horses, some late bloomers and a few potential superstars in the making.

Just like this year’s draft class, there are a plethora of personalities who are inspired by the emcees who are changing the way hip-hop is being accepted in American pop culture. This new generation of hip-hop fans has a nice melting pot full of lyrical geniuses who provide their own style, swagger and lyrical aesthetics to the rap game, which makes the rap game even more exciting and more innovative than ever before. Just as Jay-Z is the Michael Jordan of rap, there’s a young Nas in the draft class who is ready to separate himself and show the world why he is the next superstar in the making.

Ask any NBA draft expert and they’ll say Zion is a once-in-a-generation prospect who has the potential to etch his name amongst all-time greats such as MJ, LeBron, Oscar, Magic and Kareem. But if you had to match Zion’s playmaking capability with a top-tier emcee in the game today, it would be rap’s hottest storyteller and lyrical mastermind, J. Cole.

Both born and raised in the Carolinas (Zion from Spartanburg, South Carolina, and J. Cole raised in Fayetteville, North Carolina), they possess a sense of fire from within to show the world that great talent can come from the South. Zion’s ability to change the momentum of a game with an out-of-this-world dunk or insane help side defensive block is similar to how J. Cole would break the internet with unexpected releases and addictive wordplay on critically acclaimed projects such as Born Sinner, 2014 Forest Hills Drive and KOD, and on dope chart-rising tracks such as his random cameo on Young Thug’s latest club banger, “The London.”

Built like a football player (6-foot-6 and 280 pounds), Zion is a walking mismatch for anybody guarding him as he can handle the rock, has insane explosiveness and possesses the physical strength to hang in the air while drawing contact. This can be compared to J. Cole’s ability to bring his lyrical wordplay out with the best of the best while being able to make club anthems and music for the soulful hip-hop fans who appreciate songs with substance. Need an example? Just refer to “Power Trip” and “No Role Modelz.”

Just like J. Cole, Zion is a humble soul who knows how to relate to and connect with the fans. When you can win fans over with your dominant play and admirable character, you’re bound to be a legend in the making.

Like Cole World left a mark on hip-hop, Zion is ready to leave a significant legacy that would put him G.O.A.T conversations.

This smooth, speedy playmaking point guard has randomly caught the eye of many insiders and fans thanks to his eye-popping athleticism. A dynamic playmaker with a highly competitive spirit and lightning quickness, Ja Morant became the hottest prospect after his second-round appearance in the 2019 NCAA Tournament. Becoming the first and only player to lead the nation in points and assists per game, Morant took a page out of Pusha T’s book and showed the world that he knows how to put “numbers on the boards.”

Recently known for his lyrical quarrel with Drake, Pusha T is considered a top 10 underrated emcee in the game for his witty wordplay and cadence. The Virginia native brings a smooth, laid-back flow to his rapping style, which is often compared to greats such as Bad Boy’s OG, Ma$e. It’s a reason why Kanye West made him president of his empire, G.O.O.D. Music. His ability to bring authenticity through his raps and through his image secured him some great deals with Adidas.

Like Morant, Pusha T knows how to become the floor general, a jack-of-all-trades who can out-rap anyone on a given beat at any given chance. From bangers such as “M.F.T.R.,” “Drug Dealers Anonymous” and “I Don’t Like (Remix),” Pusha was able to successfully show the world his versatility, which made him a top-tier emcee for many years.

Ja and Pusha both got a great push after teaming with great talents who helped them get to the position they’re at today. Morant and Williamson dominated the AAU circuit when they hooped for the South Carolina Hornets. Pusha and his brother, Malice, formed one of the greatest rap groups of all time known as the Clipse. With classics such as “Grindin” changing the sound of rap, the rap world paid attention to each brother’s lyrical craftsmanship and flow techniques.

But as both of these great talents later split with their counterparts and went to a different direction of stardom, both know that when the spotlight is on, it’s time to perform.

That’s what makes Ja Morant the Pusha T of this amazing draft class of hoopers.

A lefty who leaves it all on the floor. Canadian guard RJ Barrett brought his winning ways to Duke after being ranked the number one high school player in the nation. The kid is an absolute stud on the open court, as defenders have difficulty guarding him on the transition. An above-average player for his position (6-foot-7) who has moves to get to the hoop and is a crafty finisher, RJ has been NBA-ready since his National Player of the Year campaign in high school. His competitiveness and willingness not to take plays off the court are what many scouts and coaches consider special about him, but due to the Zion hype he is slowly being overlooked as a superstar— something that can be compared to the career and music of G.O.O.D. Music’s Big Sean.

Sean is known to possess a different kind of confidence whenever he steps into the booth. Confident enough to flaunt his talents but humble enough to know he needs to improve, Sean makes music that speaks to those who aspire to be the head honcho when the time comes. Being a part of an insanely talented class who delivers thought-provoking bars on some iconic trappy beats, such as J. Cole, Kendrick Lamar and Meek Mill, Sean makes it a duty that his presence is acknowledged with a slew of bangers and songs filled with a plethora of punchlines. “Dance (A$$),” “Blessings,” “My Last,” “Marvin & Chardonnay,” “I Don’t Fuck with You” and “Bounce Back” show the music fans that, just like Barrett, he knows how to deliver a slam dunk of a hit.

Lyrical critics see Sean as an elite emcee thanks to his impressive wordplay on guest features of hit songs such as “Mercy,” “Big Bank,” “All Me,” “Clique” and “Thank You”.

Barrett brings the Big Sean competitiveness and spirit of this draft class as he continues to prove to everyone that if you sleep on him and his game, you will get a “Burn.”

If there were a quote to compare to Gonzaga’s Rui Hachimura’s game, it would be a quote from the late, great Stuart Scott: “He’s just as cool as the other side of a pillow.” The Naismith Award candidate caught the eye of many college hoops experts early in the season as he led his Zags to an impressive upset win in the Maui Invitational Championship game against Duke. Averaging 19.7 points per game while shooting 59% from the field, this Japan native showed the hoops world that this upside is huge and he is just getting started.

While adjusting to high-level competition, Rui has been able to display an excellent shooter’s touch with great IQ and winning intangibles. He has the ability to understand how to create space for himself and his team, controlling the way he plays instead of being rattled. He’s becoming a lockdown defender in such a unique way that it can be compared to an emcee who brings some different energy to the rap game: A$AP Rocky.

Although he was born and raised in the Harlem section of New York City, Rocky has a sound that is more indebted to the South. One thing naysayers can’t deny is that the guy knows how to become the face of a brand. Just like Hachimura’s smooth and efficient scoring ability, Rocky’s laid-back Harlem swagger has fans addicted to his presence, and you can feel it on hit songs such as “Fuckin’ Problems,” “Goldie,” “Peso” and “Wild for the Night.” Just how Rui can put the team on his back and carry them to victory.

Rui Hachimura would be a unique prospect due to the fact that he has the potential to be the first Japanese native star to shine and take the league by storm. His game is as fundamentally sound as an A$AP Rocky song. He’s prone to get “pesos” giving out buckets on tough defenders night in and night out.

Related: Who the Hell Is Ja Morant?