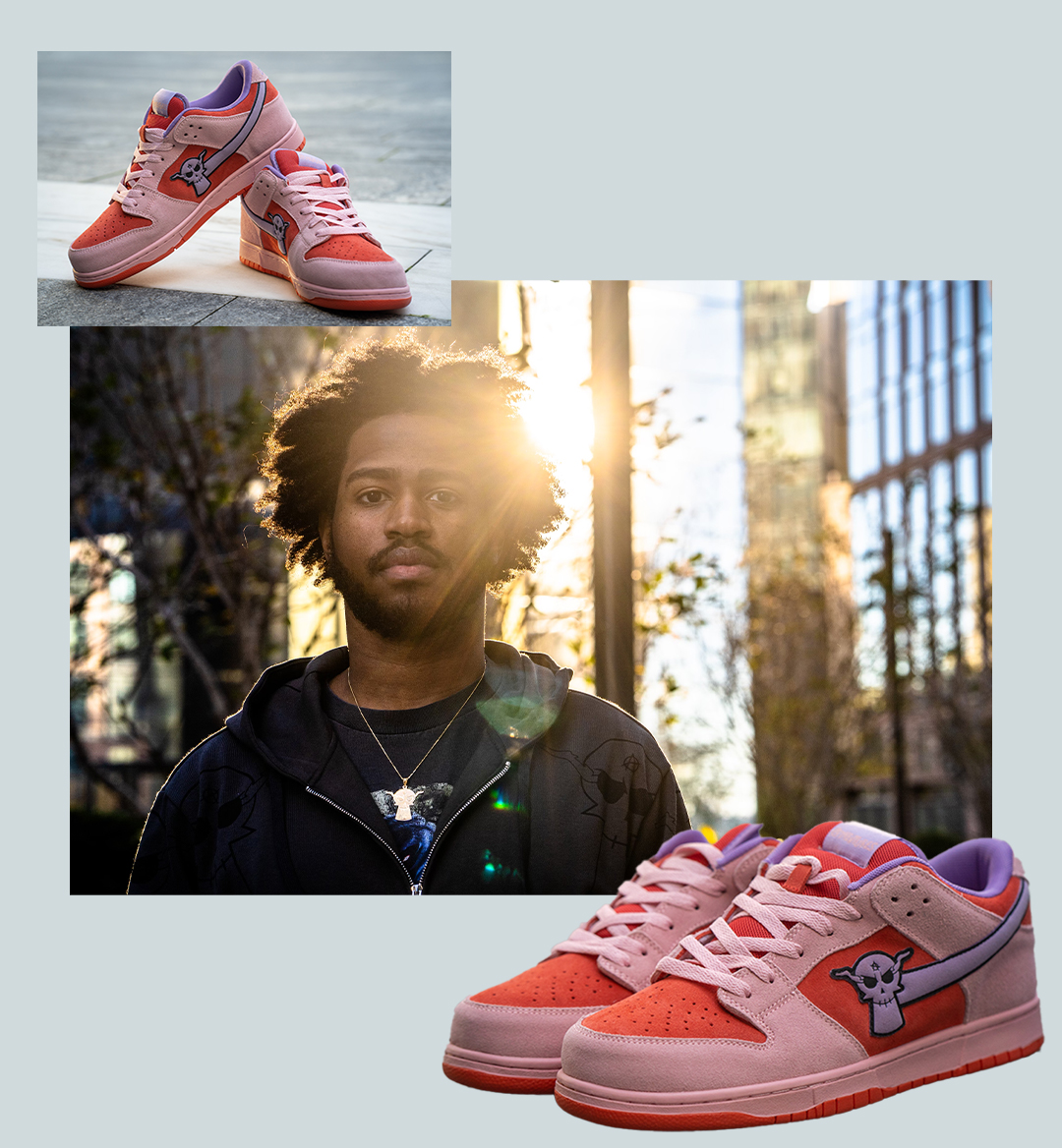 “My friend sent me a link like, ‘Bro, somebody's wearing your hat on the main page of SSENSE,” Jadeja McFarlane grins to me as he recounts one of the moments he started to feel that his brand—The Adventures of Grim Reaper J—was truly working. What started as a passion project fueled by a developing interest in design blossomed into a line of sneakers, hats, hoodies and more. We had the chance to catch up to hear about how Jadeja first developed the ethos of the brand, and how it snowballed into sneakers and a cult-like fandom in the past couple of years.

Back in 2018, design was a hobby for Jadeja in his spare time: “I was working marketing and social media for this clothing company, and I didn't have a computer at the time. But in our office we had an iMac. One of the big computers had every Adobe program on there. So in my free time I would just sit down, play around on Photoshop, kind of start getting the hang of things. And then it got to the point where I had these ideas where it's like, I want to bring 'em to life. I was hanging out with these two friends at the time that were also on the same thing and we kind of pushed each other to do it.

"And one of my homies did a random edit for me of this graphic. I ended up putting it on a crew neck. Made one for myself, and then I posted it on my finsta. And whoever was on there was like, ‘Yo, I want one, I want one.’ I made a batch of 15. Didn't charge anyone to make a profit. It was whatever it cost to make, it was probably like 15, 20 bucks a pop. Made those for them and then everyone starts posting it on Instagram. And then it got to the point where people were all interested in it and I realized I could make money off this.

"So that's when I actually sat, drew a logo. I wasn't that good with graphic design at the time, so I had one of my friends help clean up the logo and design it for me and put it on a hoodie.

Once I put it on that first hoodie and posted it and made my first couple sales, I was like, ‘Oh, I gotta keep doing this.’ Because that was the first time I ever got to be creative and see what it can bring back for me."

Jadeja officially announced the brand on Halloween in 2018, but didn’t drop the first item until March of 2019. He did a hoodie, then a tee, and then the next natural progression was a fitted cap.

It took a while to get the logo exactly right. On the first version, Jadeja chuckles: "It was honestly so bad." The logo was inspired by a certain cartoon character with a Jamaican accent—don't worry about who. "And I'm a Jamaican person, so I was like, 'This dude's fucking sick. I love this guy. So when it came to like thinking, what kind of Grim Reaper I'm gonna do, I found one that I liked, made enough changes to it where I can make it my own logo and I just started running with it."

He tells me a funny story about how he got the final version: "I tried with a couple friends to get the flames done, and surely enough, the embroidery shop that I went to to do it, the guy who was just like helping me as the front desk guy, he happened to be a graphic designer. And he was like, 'How do you want it?' I explained to him how I wanted it and he was like, 'All right, gimme a sec.' Boom. Got it. The first try. That's the one. And then it's been the same logo ever since."

With the logo established, “I started embroidering my logo around various sports teams. Because the hoodies and tees had gotten me some traction, but once I started doing the hats…” he smiles to me, before going into another story:

“I remember I was in Opening Ceremony with my friends. RIP. We're talking, I'm like, ‘Y'all, I recently made this hat, what do y'all think about it?’ Showed it to my friends. They were like, ‘Oh, that's sick. One of my homies was actually thinking about doing something like that.’ Word, say less. I posted it on Instagram in that very moment, and that was the first time people actually started showing love to something that I made. Shirts and hoodies, they got overlooked a little bit, but people love fitted hats.

"I started getting the most random placements in the world. I remember I gave Ishod [Wair] a blue LA hat that I did. And he happened to wear it with this guy. He did a shoot with this guy named Sam Mueller. And they did it and the shoot ends up being on the front page of the SSENSE website.

"And that's when I was like, ‘All right, hats are making sense.’ And I just started running hats for a while."

Hats started to put Jadeja on the map, but then sneakers become a major part of the brand throughout the pandemic: “I was chilling in the studio with one of my friends because he made music, and I told him I always wanted to make a shoe. Because I'm a heavy sneakerhead. My personal collection, aside from the shoes I make, at this point, I'm definitely over 50 pairs. So I was like, ‘Bro, I really wanna make shoes. And he was like, ‘if it's something you really want to do, I'll help you out. I didn't know graphic design that well at the time. So I just searched up a template of the shoe I wanted to replicate. Threw my logo on there, made a little bullshit version, sent it to him. Then he actually went into Illustrator and made me a mockup. And from there I printed out a bunch of them, got a box of crayons and just sat in my room like a kid, coloring them in and like trying different color possibilities." 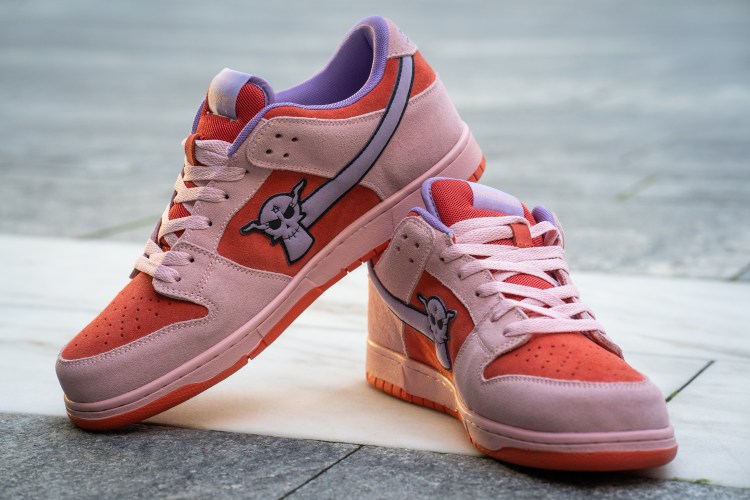 The manufacturing process was a bit arduous, and Jadeja had to go back and forth on a few samples before actually arriving on the model you see today. “At the time, not many people were making shoes in New York. There might have been like one person, maybe two people, if anything. And literally as soon as I made shoes, that's what really put me on the map.

"When I got that first sample, I took a picture of it. That photo is still on my Instagram. I posted it from this angle where you could see the logo. I think I put some caption like ‘in the lab.’ The feedback I got from that was like, most feedback I've ever gotten back on anything, and that's when I was like, 'Holy shit. I actually have to figure out how to do this.'"

So I invested in myself and it lowkey paid off, honestly.

As someone who has developed these skills recently himself, Jadeja is all about helping other people learn how to do something they love. When friends or acquaintances find out what he does (which often takes time, because he rarely talks about himself) and ask for advice, “I literally give them all the sauce,” he tells me. 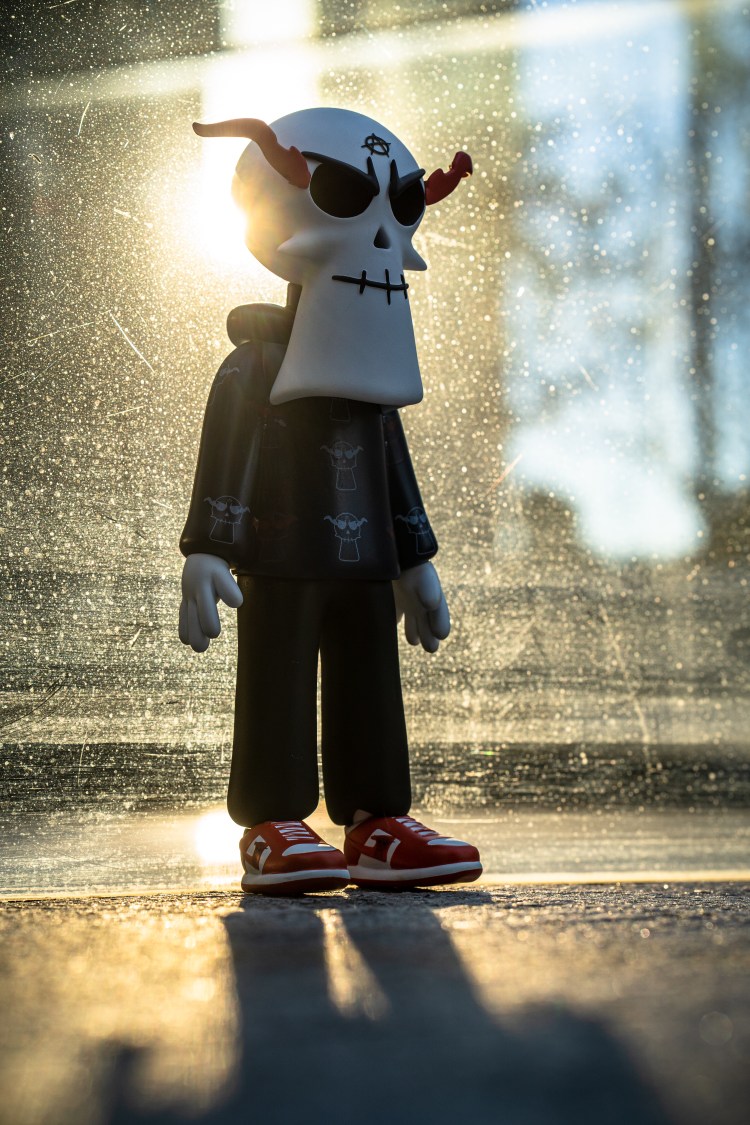 "I'm a college dropout twice. I never had interest in being in a structured kind of thing where someone's telling me what to do."

I got younger siblings. I want to show them, 'Hey, you don't necessarily have to take the regular nine to five route. There's something you're interested in? Go for it. Shoot for it all the way.'

Jadeja's brand was birthed out of a blossoming interest in design and a lifelong desire to zig when everybody else was zagging. "I've always just wanted to do my own thing. So I kind of just want to see what I could do with this, see where I could take it and grow with it," he reflects to me, smiling ear to ear our whole conversation. Keep up with the Adventures of Grim Reaper J on his IG.