What is Space Age Furniture? A History of the Design Style

An introduction to the style shaped by the future 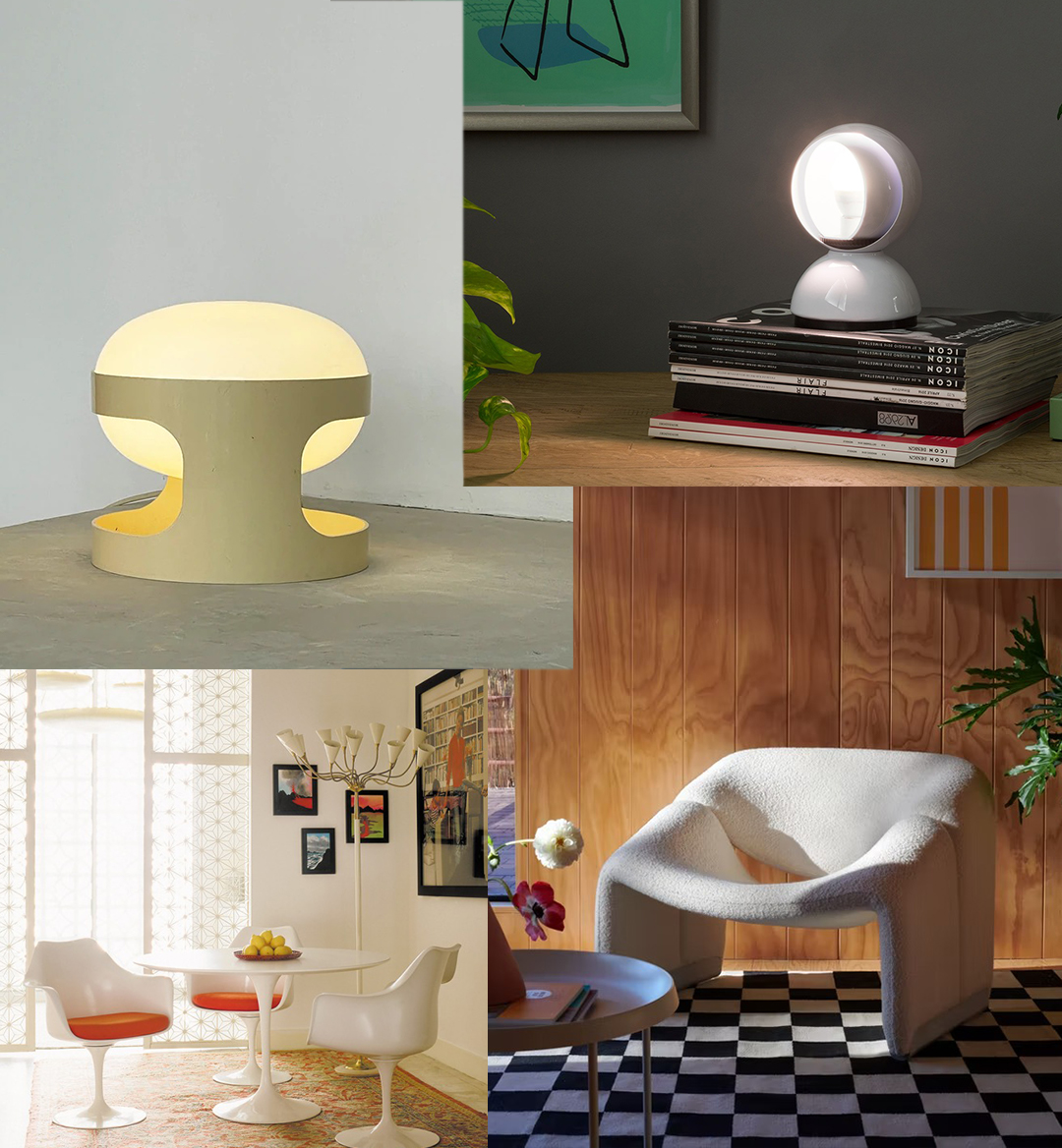 Everyone on the planet is well aware of the Space Age, and what it meant for global technological innovation and culture. The Cold War and atomic aftermath sat at the forefront of the human psyche, and as nations scrambled to construct advanced satellites and send people into space, designers of every kind allowed the world around them to fuel their creative endeavors. Naturally, designers look to their environments for inspiration, but the space race was so pivotal that Space Age furniture and design has become an entire movement in and of itself.

The History of Space Age Design

Space Age design emerged in the early 1950s amidst immense upheaval of the status quo, and sought to illustrate a utopian future in the wake of the second World War. Plastics became an increasingly popular material as mass manufacture became accessible, and designers took full advantage of the doors opened by the new medium. Given that the period was full of exploration in engineering and science, Space Age designers also sought to evolve their given fields and push boundaries farther than ever before.

This era saw incredible innovation in rocketry, materials science, and other areas, much of which eventually trickled down into mainstream use in other fields. Several innovations began as NASA technologies, like memory foam, LED lighting, freeze dried foods, and even the internet.

The Space Age was a universal concept in design, spanning from fashion to architecture and beyond. The term was first formally coined in 1964, when Pierre Cardin launched his "Space Age" line. Other prominent fashion designers from this era included André Courrèges and Paco Rabanne, with iconic designs like the gogo boots being released in the 60s.

Automotive and architectural designs frequently took notes from Space Age themes as well. The 1959 Cadillac Coupe DeVille featured taillights inspired by a rocket engine, and the Futuro House by Matti Suuronen imitated the iconic look of the flying saucer as a portable ski chalet.

How to identify Space Age furniture:

Space Age design is often typified by plastic or fiberglass as a main component, with soft curvature enabled by the material's properties. Often comprised of simple shapes and large, bowed lines, Space Age furniture was rife with designs inspired by icons of the Space race. The Moon and its symbolism were common fare, as well as a newfound obsession with pods and compartmentalized living. The Pop art and design movement also shares many cultural ties with Space Age design, and many iconic works can be considered both Pop and Space Age.

The Ball Chair, designed by Eero Aarnio in 1963, is the quintessential Space Age furniture piece and one of the most iconic Finnish designs. It made its worldwide debut at the Cologne Furniture Fair of 1966, and immediately gained notoriety for its unorthodox form and production methods. Constructed of molded fiberglass and steel, the womb-like bubble envelops the user in an isolated space, hiding them from view unless seen from the front. The entirety of the chair is upholstered inside the rounded cavity, offering comfort in both a physical and emotional sense.

The Panton Chair is as much of a technological marvel as it is pretty to look at. Designed by Verner Panton in 1959, it features an entirely plastic construction with a cantilever design that leverages plastic's contradictory characteristics: rigidity and flexibility. The chair is rigid enough to maintain its curves and overall structure, yet allows for a small degree of flexion when one sits in the chair. In fact, the chair was not capable of being produced to the original specifications until 1999, long after it was initially designed. Beyond its status as a technological marvel, the Panton is simply beautiful to look at. From a profile view, the chair's overlapping curves create a series of sweeping lines that create an anthropomorphic shape, almost as though it were frozen in motion.

The Egg Chair is a modern interpretation of the classic wing-back chair, designed by Arne Jacobsen in 1958 on commission for the SAS Royal Hotel in downtown Copenhagen, Denmark. Not to be confused with the Ovalia Egg Chair you might recognize from Men in Black, the Egg Chair is a trademarked design by the original manufacturer, Fritz Hansen. While its eponymous description may be a liberal interpretation of an egg shape, the Egg Chair's construction broke many of the design conventions of the time. Jacobsen spent time in his garage perfecting the form out of clay and wire, and ultimately molded the inner structure out of foam and covered it in upholstery. The Egg Chair's cousin, the Swan Chair, is nearly as recognizable and was also designed by Jacobsen for the same hotel.

The Tulip collection (also known as the Pedestal collection) by Eero Saarinen is undoubtedly a classic of Space Age design, and is even considered one of the most classic works in modern industrial design. These pieces check every box of the Space Age, complete with futuristic curves and synthetic materials. The series consists of a dining chair, armchair, and several tables, all of which were meant to "clear up the slum of legs." Saarinen believed that "The undercarriage of chairs and tables in a typical interior makes an ugly, confusing, unrestful world" and sought to "make the chair all one thing again." The Tulip Chair and its relatives is built from an aluminum and plastic stem which supports the fiberglass shell of the chair. It was designed in 1955 and 1956, mere years before Saarinen's death from a brain tumor in 1961.

Cesare (known as Joe) Colombo, was an Italian designer from Milan. Initially, Colombo began his career as a painter, but switched paths to design early on. His most iconic works were wit Kartell, a company that specializes in plastic furniture. Colombo has been somewhat accredited with the genesis of the ubiquitous monobloc chair, as one of his designs pioneered early mass manufacture of stackable plastic chairs. Equally stackable was the incredible KD27 lamp, which featured a bulbous lamp on top of a hollow, cylindrical plastic housing. Its sibling, the KD29 (pictured above), featured small trays in its base, whereas the KD27 had an open bottom, allowing multiple units to sit atop one another.

The Djinn chair is arguably more of a modernist design than strictly a Space Age one, but cemented itself in the Space Age canon when it was featured prominently in the 2001: A Space Odyssey. Designed in 1965 by Olivier Mourgue as part of the Djinn series, the Djinn chair came about during a time when eastern mysticism was increasingly exoticized in western decorative arts. The name "Djinn" refers to an Islamic spirit capable of changing shape, alluding to the various furniture pieces designed using the same forms.

One would be hard pressed not to see the Space Age influence screaming out of this design. The Eclisse Lamp was designed by Vico Magistretti in 1965, when fascination with the Moon began to rise to a fever pitch. The lamp is both avant garde and utilitarian, allowing the user to dial in their preferred light intensity by rotating the inner lampshade which "eclipses" the light source. This allows the lamp to provide both direct and diffused light in an ingenious manner. The design was produced by Artimede, who still sell the lamp to this day. It is also featured in the permanent collections of the Metropolitan Museum of Art and the Triennale Design Museum in Milan.

Pierre Paulin has a countless number of classic furniture designs that still feel fresh even today, but none are as coveted and recognizable as the Groovy Chair, which the French designer first conceived in 1964. He continued to develop the design for nearly a decade, and released the F598 model in 1973, which is the version produced today. The groovy chair's design took advantage of wood molded techniques that were cutting edge for the time, lining the wooden frame with foam padding and upholstery.