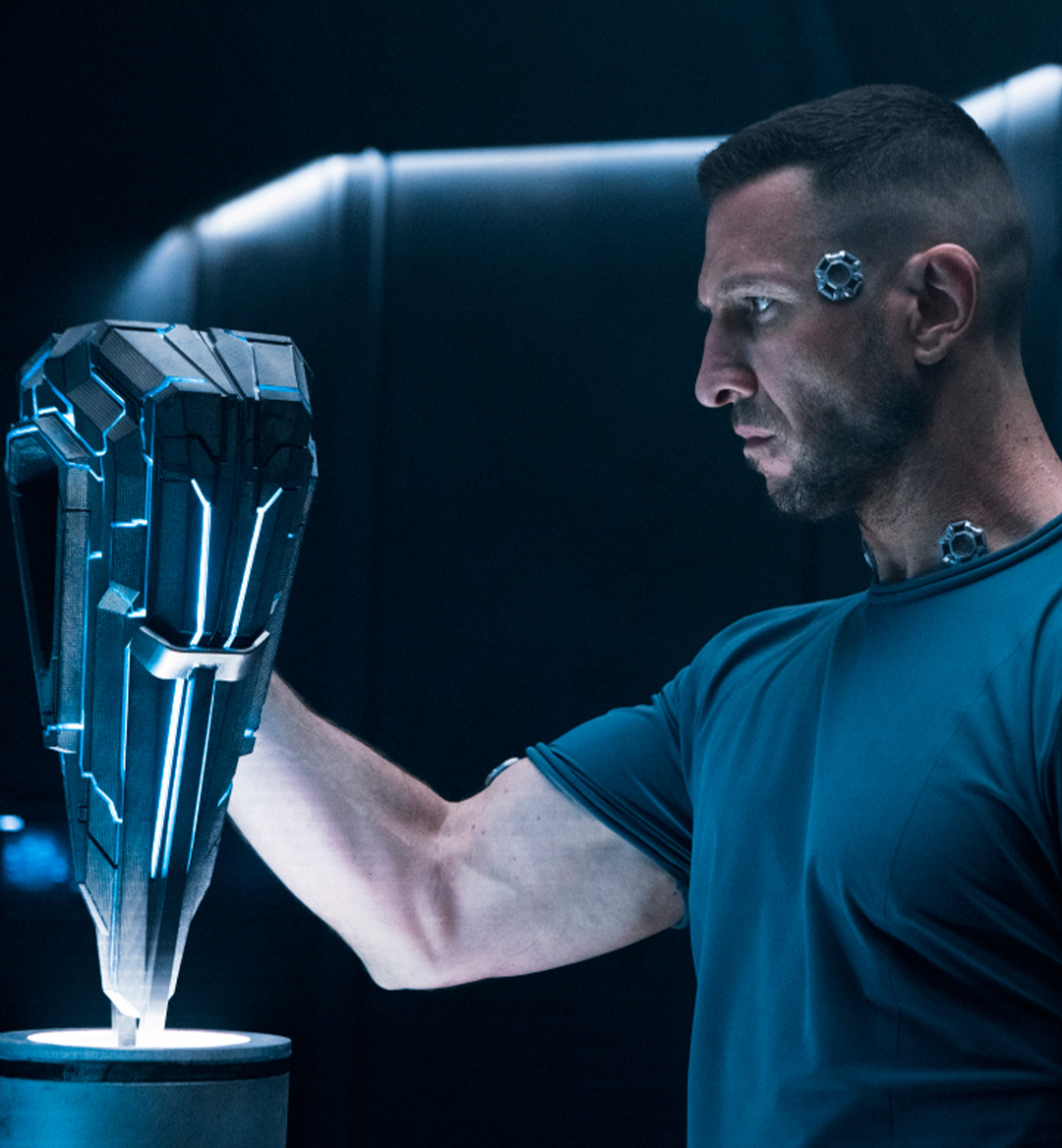 Things were left a bit open-ended after last week's episode of Halo on Paramount+, with Master Chief heading back to the UNSC base after having gone rogue. As Kwan Ha is being kept safe on the Rubble with Soren, things open up for Episode 3 to explore where Chief's head is currently at.

We kick things off on the planet of Oban—they call it a "waste salvage colony," which is basically just a fancy word for one, massive steaming landfill. Not only do the people of this planet live amongst garbage, but they also wear garbage, too, with hordes of people walking around in makeshift outfits comprised of repurposed trash.

We focus in on two young kids reading a book even though they're supposed to be working in the landfills; they're caught reading by a few guards and are chased around, with the young boy eventually being KILLED by the guard. Oh, and then the young girl is electrocuted by another one. Honestly, the violence and gore in this show is still shocking to me.

And if that wasn't already terrible, the Covenant decides to swoop in and make the rounds while this is occurring. Just as the young girl is about to be killed, an alien comes in and saves her (okay, King), where it's then revealed that this is all just a flashback of Makee's (Charlie Murphy), who still lives and works among the Covenant, as they feel she's the "Blessed One."

In the present day, Makee is about to set off for Madrigal to look for the relic—they now refer to it as the "keystone." One of the aliens is talking to her about Master Chief, who they also believe shares her powers; she then promises to bring back the keystone and Chief's head. 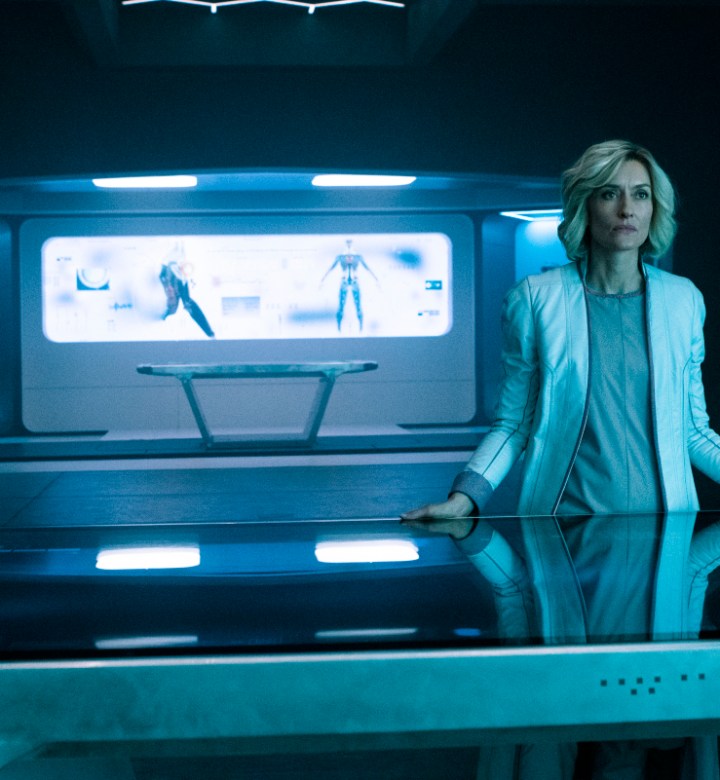 Elsewhere, Dr. Halsey is engaging with Cortana, who is finally out of her egg and basically looks like an unfinished character from The Sims. The two go back and forth, with Cortana trying to figure out what her purpose is and how the Cortana System will work. Basically, their plan is to integrate the system into a Spartan in order to have more consistent and controllable soldiers.

Chief is eventually greeted by Dr. Halsey, who has him situated in a medical exam room. She explains that the new system will allow him to get back to the front lines instead of being caught up in his head. While she's chatting with him, it seems like the gears in Chief's head are turning as he's trying to figure out if he really wants to go back to that previous version of himself. Despite these thoughts, he reluctantly agrees to the system; with that, Halsey and her assistant Adun (Ryan MacParland) get to work.

Cortana is left alone with Adun, who briefly and very awkwardly compliments her on how beautiful her brain is. He then almost kisses her (what!?) but is interrupted by Dr. Halsey. Okay, is Halo turning into a soap opera on us?

Anyway, they activate the system to start linking up Cortana with Chief, and another shockingly freaky moment happens when a needle is aggressively driven into Cortana's eye (I don't even want to describe the sound it made). Cortana falls unconscious and her nose starts to bleed; it seems like the goal here was to take a "neural substrate" from her brain to then inject it into Chief. The needle is removed (eek) and the substrate is then brought over to Chief, where a hole is then drilled into the back of his head to make room for the substrate.

In the other room, Cortana is lifted down into a tank of water, where she's able to be retrieved through a hologram upon the speaking of her name. Halsey tries it out, which makes Cortana appear before her as a holographic, walking-and-talking person. She's able to instantly retrieve the information about the keystone as Chief lies unconscious, though she's a bit upset with Dr. Halsey about not having full access to become one with his body yet. 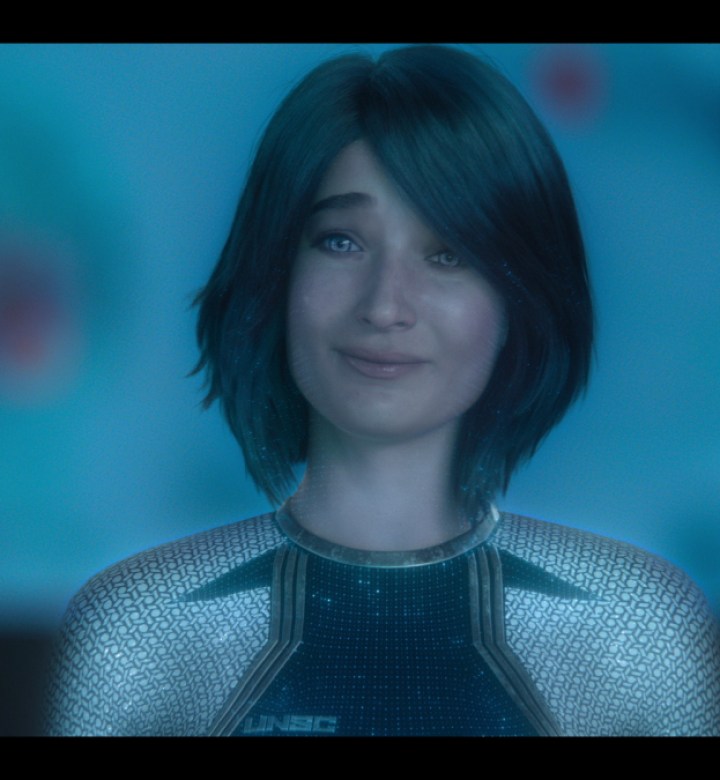 We're back at the Rubble to check in on Kwan Ha, who's still chilling with Soren as she was left there by Chief in the previous episode. She wanders around the city a bit and catches a brief broadcast about Vinsher (Burn Gorman), a politician who opposes the resistance and has taken over Madrigal. After seeing this, she informs Soren that she wishes to return to Madrigal, though he won't let her as he made a promise to Chief to keep her safe. She explains why she wants to go home, but Soren isn't hearing any of it and basically treats her like a little girl.

At the UNSC headquarters, we've arrived just in time for the big reveal: Chief finally gets to meet Cortana. He's a little freaked out by how she's an exact clone of Dr. Halsey; overall, he just doesn't seem too pleased with her. Sensing this, Cortana heads off into the time time continuum saying, "Well, it was a pleasure to meet you, Master Chief, I'll...speak to you soon—I guess." I mean, come on, our girl Cortana has feelings too, Chief!

However, later on, Chief decides to give Cortana another shot, except this time, he's got a bit of a crowd watching on as they're recording him touching the keystone. We're shown a longer flashback of Chief's childhood than usual, but when Cortana goes to take over and record those memories, the connection is lost. Afterwards, Cortana offers a suggestion to Dr. Halsey, who basically tells her that she was only created to obey her orders—ouch.

In space and on a UNSC Patrol Ship, the officer on board encounters a Covenant ship that they're able to get in contact with. A young woman's voice comes through the radio, explaining that she needs help as she was taken as a prisoner. Though I'm not sure how much I believe this—it could just be a set-up. Regardless, the ship sends over a pod, which arrives back on the ship with Makee, but of course that's not the case, as she instantly summons an army of violent worm-like creatures to take down the officers. The entire crew is killed with Makee left on the ship to figure out where the keystone is. 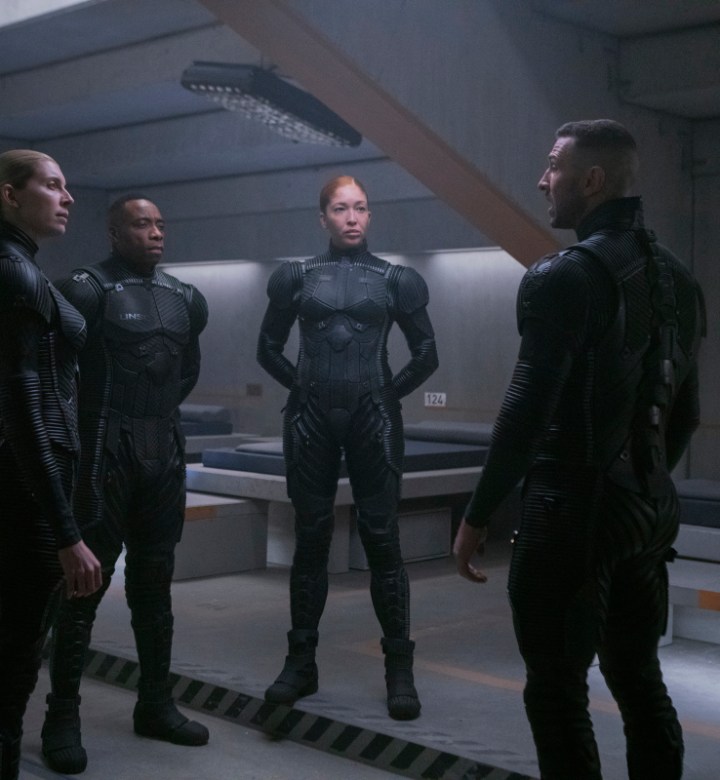 Back at the UNSC base, Chief is getting reacclimated to daily life with his Spartan buddies, but Cortana comes in and crashes the party, innocently introducing herself to the Silver Team. He's quite harsh to her and basically tells her to scram, and though she leaves, it's clear that she was emotionally affected by his words.

Later on, Chief's looking up some data online and is having trouble finding anything, so Cortana pops into his head and tries to get him to trust her. He finally gives in and allows her to help, though it ends up becoming more of a therapy session. Afterwards, Cortana becomes a bit of a tattletale, letting Dr. Halsey know that Chief is trying to remove the receptor in his spine that prohibits him from emotionally feeling things.

Instead of having Cortana shut down the situation, Halsey wants her to appear as an accomplice as a way to gain his trust instead of coming off as a spy. She reluctantly agrees, talking him through the process as he removes the receptor with a knife from his lower back. However, what neither of them realizes is that fellow Spartan, Kai-125 (Kate Kennedy), was watching the whole situation unfold from afar.

In a surprisingly wholesome scene, we follow along with Chief as he goes out in public, takes the train, and strolls around. As this is an entirely new experience for him, it's quite a lot to take in, as he's exposed to music, different types of people, and even a dog. Coming off this experience, he immediately heads back to the keystone to fully feel his flashbacks, though Cortana advises against it.

While going through the flashbacks, he realizes that there's a second keystone that his family most likely buried at their home. With Cortana's help, he's able to isolate the planet he lived on as a child, being that it had visible ice rings. He's now determined to go back to the planet, and Halsey agrees to accompany him.

At the Rubble, Kwan is trying to re-route the electrical wiring of one of Soren's ships to escape, though he catches her in the process. She cuts a deal with Soren: if he flies her back to Madrigal, she'll give him a heft sum of her family's money. Surprisingly, Soren agrees.

Alright, I could've done without seeing a needle being viciously slammed into Cortana's eyeball, but aside from that, this episode is actually taking the show in a much more intriguing direction. I have to say, the past two episodes were giving me The Mandalorian vibes, but the complexity of Cortana's relationship both with Chief and with Dr. Halsey is adding a transformative quality to the series.

We still have a ways to go given that this is only the third episode of 10, but seeing as this one presented a complex, marked change of events, it'll be interesting to see how the relationships with Cortana play out, as well as if we ever see Kwan and Chief reunite.