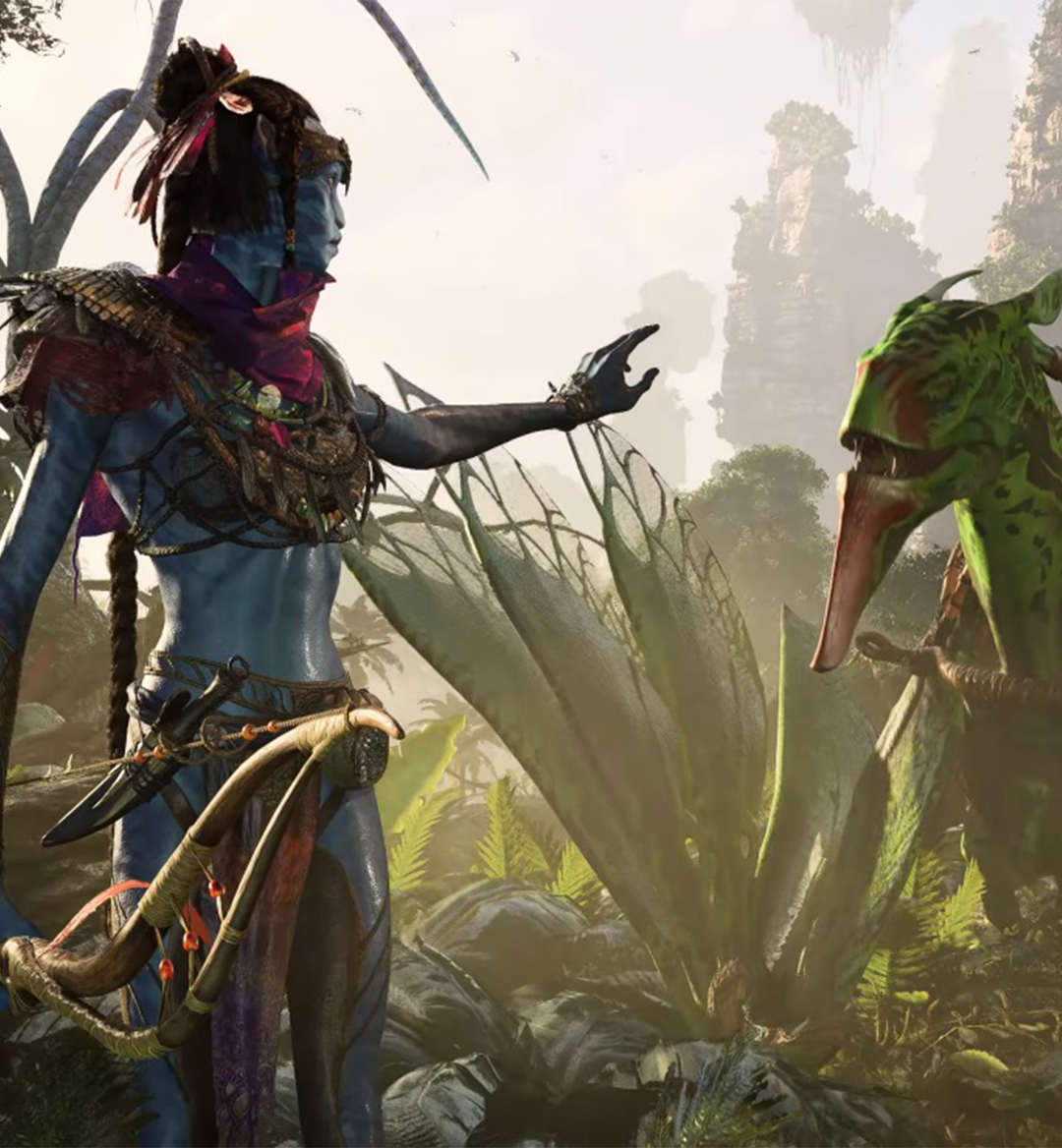 We gotta keep it a hunnid with everyone reading this right now - E3 2021 was kinda buns. Don’t get us wrong, though - there were a few noteworthy announcements that fired up gamers’ timelines across the globe. But the majority of the all-digital event left a whole lot to be desired. We’re not here to go into great detail about the virtual show’s many shortcomings, however. Instead, we’re going to celebrate all the awesome reveal trailers that landed on our screens during the developer/publisher dedicated livestream events. The 10 games we listed below are the definite highlights from this year’s installment of the Electronic Entertainment Expo.

While the Ubisoft Forward showcase did little to impress, at least it ended with a nice surprise in the form of the debut for a brand new Avatar video game. That game ended up being Avatar: Frontier of Pandora, a first-person experience that gives players the chance to fully explore the Western Frontier portion of Pandora. What was shown off points to a game that’s rife with beautiful sights to see and human foes to vanquish within an expansive open-world environment. It’s gonna be a while before the next Avatar film hits movie theaters, so this licensed action/adventure romp as the blue-skinned Na’vi should hold everyone over until then.

Mario + Rabbids Kingdom Battle ended up being the type of crossover game that no one even knew they wanted until they got it. Who knew that a bright and bubbly platforming romp that adopted XCOM battle elements would be such a hit? Even though it got spoiled just mere minutes before its official reveal, Mario + Rabbids Sparks of Hope’s eventual unveiling still elicited plenty of excitement. Everything that made the first game so memorable is returning alongside new elements, such as galactic adventuring, party newcomers, and the usage of Sparks.

The Xbox + Bethesda Games Showcase had a few gems scattered throughout it. One of the earliest highlights arrived when viewers got treated to an engrossing gameplay demonstration for S.T.A.L.K.E.R. 2: Heart of Chernobyl. Visually, this upcoming first-person shooter definitely wowed in that department. The dark industrial locales and intense shootouts scattered throughout the game’s new trailer built up plenty of hype for its impending release. Plus the attention to detail was clearly evident as the characters onscreen spoke in their native Russian language. S.T.A.L.K.E.R. 2: Heart of Chernobyl looks to be one of the most immersive FPS games on the horizon.

Were we disappointed to STILL not get an official release date for Halo Infinite yet? But of course! But at least 343 Industries did a good job of giving us all a better look at its multiplayer component. The upcoming free-to-play online multiplayer portion of Halo Infinite looks great and a nice return to form for longtime Halo fans. The battles painted an image of high-octane, action-packed skirmishes full of fast-paced shootouts and the cool implementation of a new grappling hook. Those custom Spartan armors look pretty sweet, too. Halo Infinite’s multiplayer is looking like our next addiction, for sure.

Absence definitely makes the heart grow fonder in the case of the Forza Horizon games. The fourth game in the spinoff open-world racing series actually dropped in 2018. The long wait for another entry in the franchise was paid off handsomely when Playground Games pulled the curtain up on Forza Horizon 5. The footage that was shown for this much-anticipated sequel is simply jaw-dropping - the gorgeous sunny locales of Mexico looked as lifelike as possible while dozens of cars furiously zipped around them. The Forza games have always looked amazing, but Forza Horizon 5 looks like a true evolution when it comes to the graphical fidelity aspect of it all. We can’t wait to knock over some pins and pinatas in our new souped-up rides.

6. ‘Marvel’s Guardians of the Galaxy’

The long-rumored Guardians of the Galaxy game finally came out of hiding at this year’s E3. And once official info about the game came out, most folks were surprised to learn that it’s deviating from what Marvel’s Avengers did before it. Players will only control Star-Lord as they send out battle commands to Gamora, Drax the Destroyer, Rocket Racoon, and Groot. This upcoming interplanetary action/adventure game will also feature the ability to make important decisions that impact your crew members’ opinions of you and impact the story at large. Marvel’s Guardians of the Galaxy’s extended focus during the Square Enix Presents Summer Showcase provided a ton of info and gameplay footage that has us pretty intrigued about the final product.

Months prior to this game’s official announcement, rumors ran rampant about this Square Enix/Team Ninja collaboration. Everyone finally got to see it in action and it looks to be a pretty cool spinoff that mashes up Final Fantasy’s signature fantastical themes with the hardcore combat mechanics seen in Nioh. The reveal trailer definitely deserves to get mocked for its overuse of the word “Chaos” and the uninspired character designs. But it also deserves to be commended for showing off the game’s impactful combat that looks just as deep and complex as other Soulsborne-themed experiences. Stranger of Paradise Final Fantasy Origin is definitely on our radar.

As soon as the E3 2021 Nintendo Direct got underway, Super Smash Bros. Ultimate came out swinging with its latest character reveal trailer. The sight of someone carrying Ganondorf to his death piqued our curiosity. But as soon as we heard the familiar drums behind Kazuya Mishima’s Tekken 2 theme, our hype levels went through the roof! We finally got a Tekken representative in Smash and it’s the badass poster boy that has been with the franchise from the very start. Kazuya’s Smash reveal trailer was quite the surprise and it ended up being a fun highlight reel of everything he’s capable of in Nintendo’s mega-crossover fighter. We can’t wait to pull off some sick Korean Backdashes and Demon Uppercuts once Kazuya finally comes out.

We didn’t get any more updates about Metroid Prime 4 (and Bayonetta 4!), sadly. But what we did get was a shocking reveal for an all-new Metroid game that adopts the 2D side-scrolling gameplay style that the series started out with. Samus Aran is back to eradicate some extraterrestrial beasts within creepy caves and so much more in the upcoming Metroid Dread. The world’s most recognizable intergalactic bounty hunter could be seen sporting a sweet-looking new suit of armor in the game’s reveal trailer. Plus we got treated to some awesome footage of her new cloaking abilities, which will play a huge part in keeping her alive during the sort of confrontations she can’t possibly win.

10. ‘The Legend of Zelda: Breath of the Wild’ Sequel

The final major reveal that Nintendo gave us all was all about Link’s next mainline adventure. The second Breath of the Wild was given a ton of time to show off its biggest features - Link seemingly has the ability to rewind time to send back huge projectiles at his foes and be able to move through solid objects now. His latest journey will take him into the mysterious buildings and other ruins that reside in the skies above Hyrule, which sounds like it’ll be the most exciting element of this highly anticipated sequel. There’s a ton of incredible games to look forward to in 2022 - the sequel to The Legend of Zelda: Breath of the Wild is among that list of games that has us ready to spend some pre-order cash on ASAP!