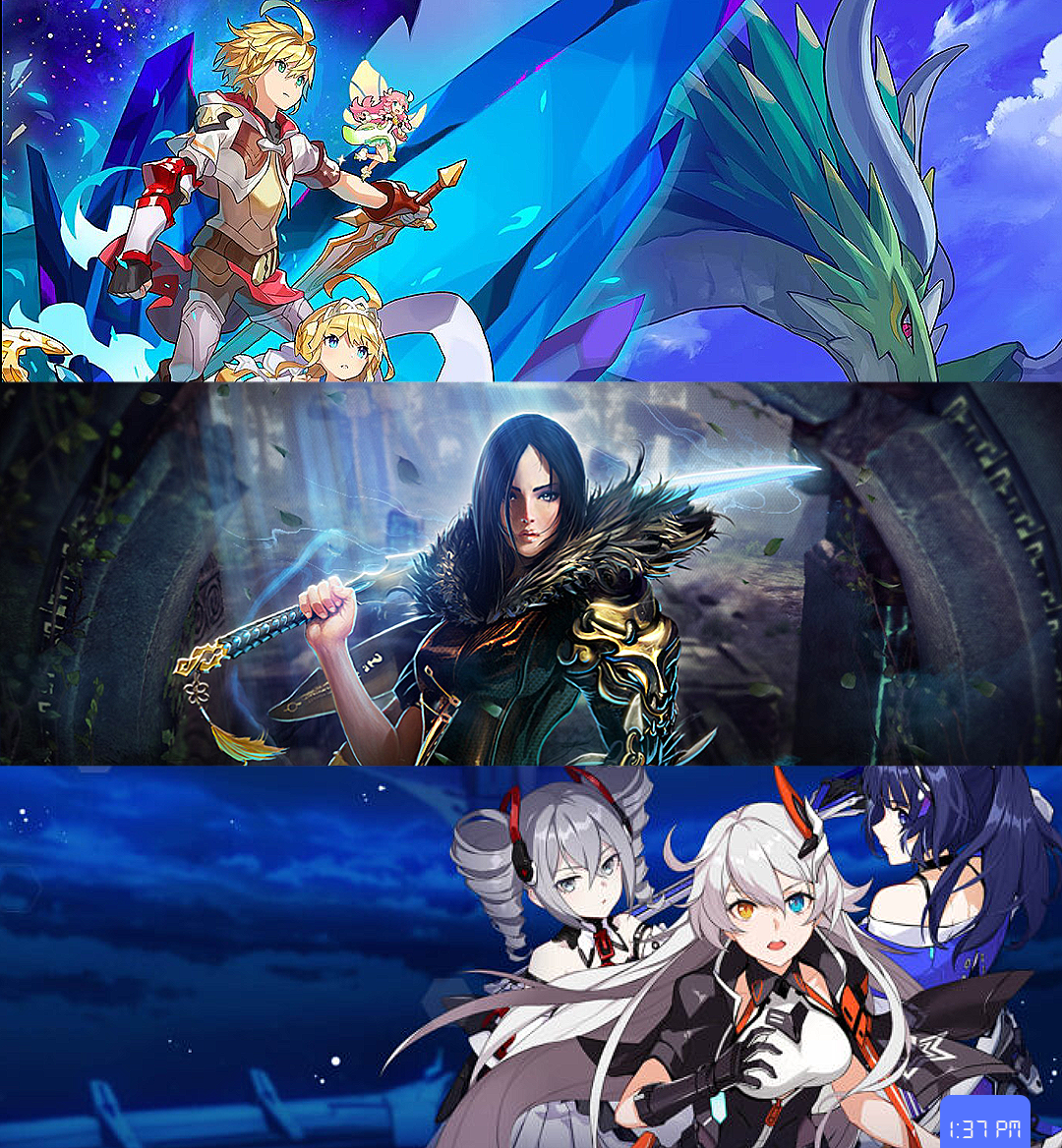 It only took a few weeks for Genshin Impact to become the most successful new IP from a Chinese developer. In its first two weeks, the game made an unfathomable $100 million in revenue with China, Japan, Korea, and the United States as its biggest markets. Even more impressively, it did this all while being completely free-to-play, making its money from its "gacha" gameplay, which is essentially a form of microtransactions.

As with any game, these have been a point of contention for some, with most agreeing that they’re not too bad at all in this scenario. However, if paying for extras in games is not for you even though you love all of the other aspects of the game, perhaps you’re looking for something else that’s right up your alley.

When searching for a game that’s like Genshin Impact, there are a lot of things to consider. There’s the genre, the combat system, the open-world aspect, the leveling up system the fact that you can play with friends, the style of design, and many, many more intricate details that contribute to the entire game. We’ve taken all of these into consideration when compiling this list of fifteen games like Genshin Impact.

Blade & Soul is a massively multiplayer online role-playing game. It has a lot of elements that are very similar to Genshin Impact, including but not limited to its style of graphics, hack & slash combat, and its anime origins. It was released eight years ago in 2014 and was developed by Team Bloodlust, Netmarble Neo, and NC Interactive for the PC, mobile and console platforms respectively. You create your character with a great, in-depth customization system and then explore the world around you with them. NPCs assign you quests and send you on battles. If you enjoy the game, you might even like the anime adaptation of it that aired from April to June of 2014.

Developed by Cygames and published by Nintendo, Dragalia Lost is a game you might not have heard of directly, but might be aware of if you’re a fan of Fire Emblem Heroes, Mega Man, Monster Hunter, Persona 5 Strikers, Rage of Bahamut, or Princess Connect, because it has crossed over with each of them before. The game is set in Alberia, a world where if a royal makes a pact with a dragon, they can wield its power. Just like Genshin Impact, you can play through the entire campaign with three friends, if you wish. If this does sound like something you want to try, make it soon because the game is slated to be shut down soon, with its last update scheduled for July.

If you’ve heard of the Dragon Quest series, then you might already know that Dragon Quest XI: Echoes of an Elusive Age is the most recent offering from the main series of games. It’s one of the greatest Japanese role-playing series of all time and many have argued that this game might just be the best of the series itself. Developed and published by Square Enix, this game features character designs from Akira Toriyama, which match up well with the style of Genshin Impact. Combat here is turn-based with a lot of mechanics and happens in a lot of rich environments. It’s all weaved together by a fulfilling narrative too. This is a must-try.

If the open-world aspect of Genshin Impact is one of your favorites, then perhaps Final Fantasy XIV is for you. You’ll essentially get to free roam Hydaelyn, which is split up into three incredible continents. Character customization here is big. You’ll get to pick your character’s race, gender, facial features, and starting class. Once you’re in with your character, character progression is key and done with classic experience points. If you heard not-so-great things about this game at launch a few years ago, know that it’s been greatly improved and revamped since then, with most of the community’s concerns fixed. The game still has millions of players daily.

In your search for a game like Genshin Impact to play, it’s not unlikely that you would have come across a few different Fire Emblem games with great recommendations. While a lot of them are great, in our estimation, Three Houses is the one to go for. Three Houses is a tactical RPG developed by Intelligent Systems and Koei Tecmo and published by Nintendo. It is a Switch exclusive, which might exclude some. If you do have a Switch and decide to play, you’ll become a former mercenary and current professor, leading students through battles, which for you will be turn-based and require great strategy. The story, characters, and soundtrack really stand out here and make this game an incredibly immersive experience.

Honkai Impact 3rd is a must-play if you’re on the search for games similar to Genshin Impact, simply because it’s made by the same developer, miHoYo. This game was actually released before Genshin Impact. It has a similar foundation, though the setting here is a futuristic sci-fi one rather than medieval fantasy. You’ll level up your "Valkyries" and then use them in the third-person combat system. It’s worth noting that while this will have all of the aspects you love about Genshin Impact (like the fact that it’s free-to-play or its characters), it will also have the aspects you might not have loved, like microtransactions and the general gacha system. Either way, it’s certainly worth delving into.

Greek mythology is the backdrop of this game, but while that’s a different setting than Genshin Impact, don’t let it put you off. Just like Genshin Impact, this game was also inspired by The Legend of Zelda: Breath of the Wild, so they share that for a start. You’ll take on the role of Fenyx who is a mortal man in Olympus. Leveling up is important here and on your journey, you’ll get resources so that you can buy HP, stamina, combat skills to use during fierce battles, and other stats too. The world feels genuinely awesome to explore and doing so is a pleasure. You can do so in more ways than just walking about on foot too.

Like Genshin Impact, King’s Raid is completely free-to-play. Also like Genshin impact, this game features the gacha system which allows you to make in-game purchases if you’d like but also supports a traditional leveling up system that is solid too. In fact, most of the characters in the game aren’t especially difficult to get, but getting the right equipment to make the most out of them is the tricky part. Side-scrolling through environments to walk into battles where strategy is required becomes addictive. The design of the game also has an art style that many could liken to anime, which is always a nice touch.

Genshin Impact requires a decent bit of strategy – you can conserve fragile resin as much as possible, know when to use primogems, and take advantage of the reputation system in some ways. If you’d like something even more in that lane, perhaps Marvel Strike Force is the game for you. Combat here is turn-based and being able to win the most battles as possible means selecting the right team members and the right abilities for them. If you’re into superheroes, then that’s a huge plus. This game boasts a massive roster with big names like Spider-Man, Iron Man, and Captain America and also has more obscure names like Sersi, Doctor Voodoo, and T’Challa’s version of Star-Lord. The gacha mechanics will also feel familiar to Genshin Impact fans.

Developed by Level-5 and published by Bandai Namco Entertainment, this game was originally released for the PlayStation 4 and PC in 2018 and eventually came out on the Switch. If you’re into JPRG adventures generally, then this game should be a no-brainer to at least try out. The game is incredibly cinematic in many ways, with a general high quality and a beautiful soundtrack composed by Joe Hisaishi. The quests and combat here are pretty true to traditional JRPGs and the open world is great too. There are other cool elements like kingdom management and a system similar to Pokémon where small creatures called "Higgledies" can help you out in battle.

Persona 5 Royal is one of the most popular games on this list. It’s a spin-off of Shin Megami Tensei and if seeing the number five turns you off because you feel like you won’t know what’s going on, this game was made for a wider audience and can definitely function as a standalone. The game is especially immersive, with an emphasis on building relationships. The protagonist is intriguing and the idea of Persona's themselves will have you hooked. In terms of a one-to-one comparison, perhaps there aren’t as many features that are directly similar to Genshin Impact, but if you appreciated the overall feel and style of that game, then we feel there’s a good chance you might like this too. If you do and you enjoy it, you have an entire series to try out.

Developed by Bandai Namco Entertainment and Tose and published by the former, SCARLET NEXUS is a game that sort of split reviewers down the middle when it was released in the summer of 2021. While many praised the combat system and the telekinetic moves, some felt that the side-quests were a weak point. Funnily enough, many critics pointed out that the game was similar enough to Genshin Impact that they would just decide to play the miHoYo game instead. That’s all the more reason for it to appear on this list, though. It doesn’t feel like a copy of Genshin Impact, in fact, fans of both series will argue that they’re not alike at all. The truth is somewhere in the middle because it can feel a little like an alternative with familiar elements.

In conversations about Genshin Impact and similar games online, it’s rare to see Tales of Arise not make an appearance with extremely high praise. It’s an action JRPG, but that doesn’t do it justice. Many of the same components as Genshin Impact are present here, albeit in a different form. The open world is vast, the character-building genuinely feels like a journey and the mechanics of the combat make it addictive. In terms of graphics, the game has an Atmospheric Shader system which gives the design a watercolor painting look, with delicate details making it feel homely. The combat happens in real-time and works best when you’re chaining combinations together. The storyline itself is gripping and paces itself very well.

The Alchemist Code is yet another Japanese role-playing game that has an emphasis on the player getting rewards. You’ll find yourself constantly getting new items and rewards which do keep the game fresh and if you take the time to learn what they’re all about, will have you immersed in the world of the game in no time. Similar to Genshin Impact allowing you to play with three friends, this game also has a four-player co-op system, but here you’ll be battling against them, with the aim of winning new rewards and characters. The game does mobile gaming very well.

Last but not least is the game that actually helped inspire Genshin Impact itself - The Legend of Zelda: Breath of the Wild. The game is heralded not only as maybe the best Zelda game of all time but arguably one of the best games ever made. It’s no wonder that this game influenced Genshin Impact and it will continue to influence games for decades. In almost every aspect, you’ll feel that Breath of the Wild does it better than any other game in a similar vein.