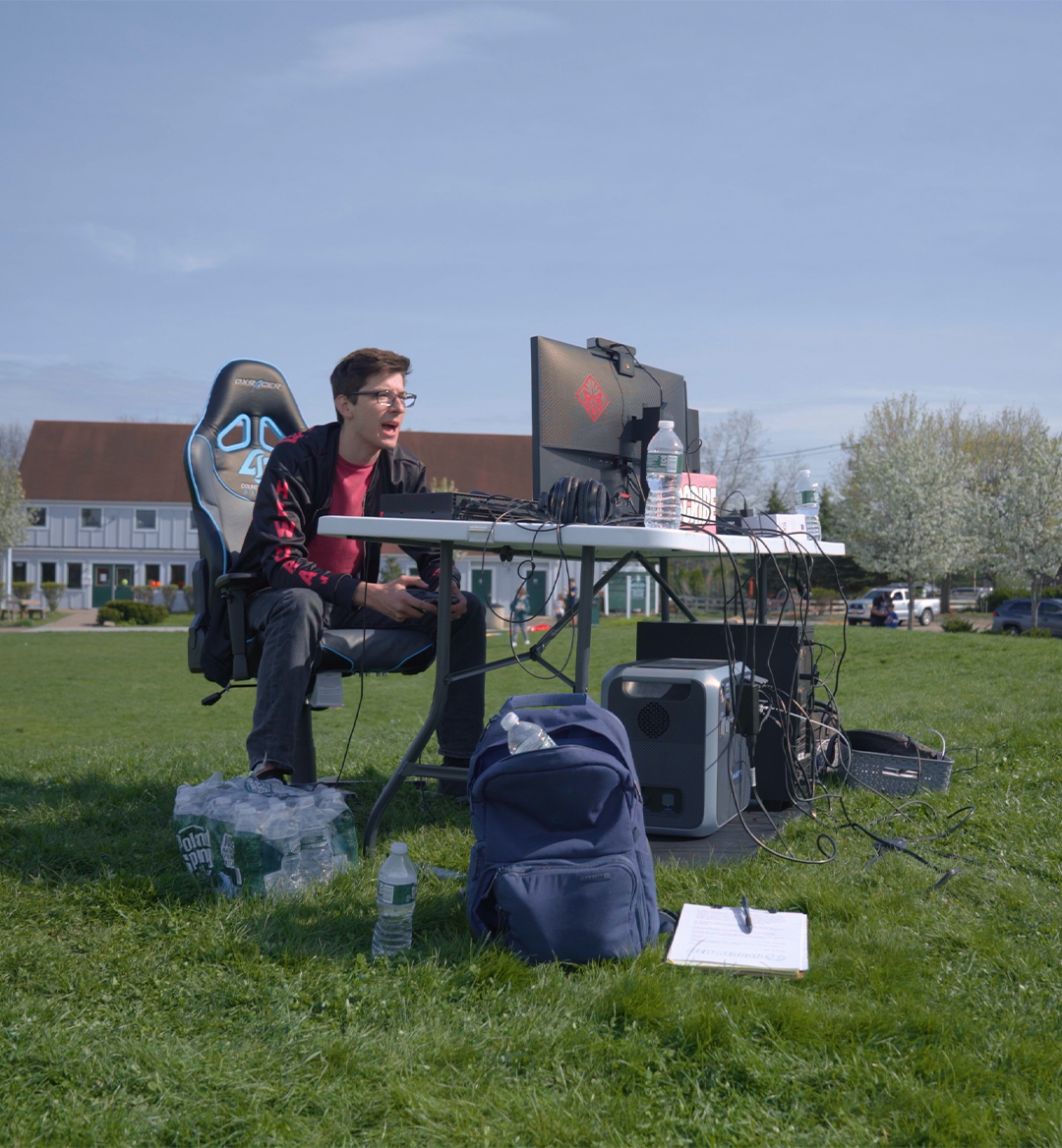 Hew Moran has two main loves in life - gaming and making people giggle like school children. He happens to be quite talented in both aspects since he's adopted some masterful skills in Fortnite and built a career out of posting humorous skits surrounding that very same game. At the time of this writing, Hew Moran's YouTube channel has amassed 347K subscribers and over 56 million total views. On TikTok, his numbers are equally monumental - he's brought in 269.8K followers and 3.1M likes thus far. ONE37pm spent some time picking Hew Moran's brain to get an idea of how his nickname came to be, what his favorite skits are, and so much more.

Hew Moran: Honestly I could lie, but I won’t. I wanna preface this answer by saying this is gonna sound really sad, but my mom was actually the one who thought of it. When starting comedy skits, I didn’t want to use my real name Matthew Moran because it's lame - I wanted a nickname that would stand out, like how Robert Burnham goes by "Bo Burnham." So my mom pointed out "why don’t I go by the 'Hew' part of Matthew?" And from that point forward, the nickname stuck. I like to lie and say I thought of it because I'm a genius though.

ONE37pm: And what led to you stepping into the world of content creation?

Hew Moran: It was actually an accident. When I was younger, my friends and I were playing ARK: Survival Evolved on Xbox because it had just been released, but we had to go to a Christmas party with our families. I got out of it (I don’t remember how), but one of my friends said I should use this Twitch app thingy to stream the game so they could watch it and talk to me while at the party. So I did and I loved it. I began streaming a lot for friends, which grew a bit (like 20 concurrent viewers) until 2020-ish. I was working at a library at the time, but it closed for a bit due to Covid and I was just sitting bored at home. So I decided to start making YouTube videos by myself and I fell in love with comedy skits which viewers seem to love, too. It’s weird to think about how my whole career started because I skipped a Christmas party though!

ONE37pm: What's been the toughest learning curve for you when it comes to your career?

Hew Moran: I think the hardest learning curve I’ve faced is that on Youtube is that any video can blow up, but also any video can flop. You can put days of planning and days of editing into a video that you think is the best video ever and it can completely fail. But on the other hand, a video you make in 30 seconds can blow up overnight. I had to find a middle ground while creating by not letting myself work on a project for too long, especially at the start of my channel when the chances of the video flopping were even higher.

ONE37pm: What initially attracted you to Fortnite? And what makes it so easy to craft funny skits around?

Hew Moran: I started playing Fortnite in 2018 because it was the "hot thing" that everyone was talking about and I loved it. But I didn’t make content and after a few seasons, I drifted away from it. However, when I started comedy skits people fell in love with my "Fortnite Kid" series. It’s easy to craft videos on Fortnite because it's constantly updating and adding collaborations. Fortnite is kind of a cheat code for gaming comedy skits because one week I’m making Rick and Morty jokes and the next week I’m making Ariana Grande jokes, but they still relate to Fortnite fans. The skits can even relate to non-Fortnite fans because they hit tons of topics outside of gaming due to all the collaborations. 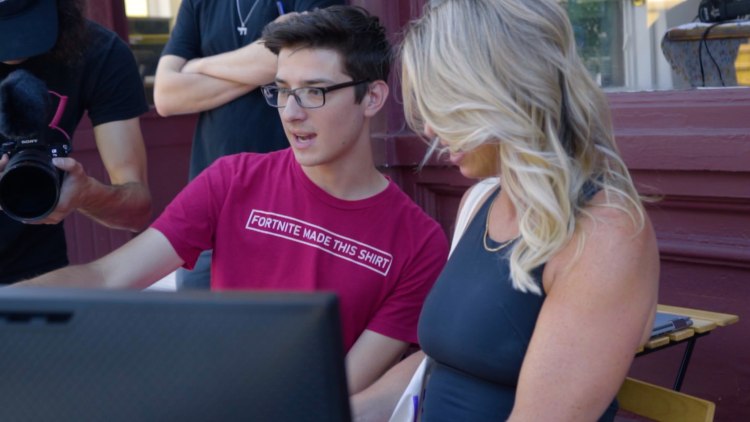 ONE37pm: What skits would you say are your personal best?

ONE37pm: Are you open to doing any collaborations with other Fortnite content creators and pro players? If so, which ones?

Hew Moran: I love collaborating with Fortnite creators! The issue is finding ones that wanna hop into a comedy skit. It’s a different kind of content than what gaming YouTubers are used to, so they usually don’t wanna do it. BUT, the creator I would love to Collaborate with is Ninja! I think we could make a BANGER video for my new vlog channel: “Flossing in NYC with Ninja until Someone Flosses with Him” and I think it would go viral viral.

ONE37pm: Are there any other games you'd love to produce skits for?

Hew Moran: I would love to produce skits for Pokémon. I do sometimes when I can. But I really hope "Pokémon Go 2" comes out or something Pokémon-related goes crazy and everyone plays it. I need an excuse to wear morePokémon onesies and throw more balls at things/people.

ONE37pm: What are some of the wildest comments you've seen in your videos' comment sections?

Hew Moran: I read almost all my comments and they really don’t get too weird. It’s just the occasional dude asking for feet pics. Most of my comments are just people agreeing that Fortnite created the Universe and is the God of all creation…which it is!

ONE37pm: So besides making hilarious video game videos, what other hobbies and interests do you have?

Hew Moran: I really wake up, make content, sleep, and then repeat every day. I don’t get much time to do hobbies or live life (YouTuber problems). But I do try to play basketball when I can and I watch a lot of movies and TV shows. The issue is that even when I’m playing basketball, I’m still having Siri take notes for potential skit ideas. And when I’m watching movies/shows, I’m taking notes on shots we should do in the next skit. It’s an issue, but I love it, so maybe not a bad issue?

ONE37pm: What's the biggest piece of advice you think every up-and-coming Fortnite content creator should know?

Hew Moran: Just do it! I’m not trying to get copyright struck by Nike here, but I think that’s the best advice for any new creator. A lot of people DM me asking "how do I start?" and I always say the same thing. I started making skits by grabbing a phone and a tripod or by grabbing my sister to hold the phone. You don't need to procrastinate, just use whatever tech you have and start making videos. Find what works for you and find what you want to do. Your first videos are going to flop and it's a learning process on the way up. So you just gotta start making videos and aim to get better every video! Even to this day, I’m still aiming to make the next video better than the last.

ONE37pm Speaks to Reed Rosen aka “Rbro” About the Accelerator Cup