Let these addictive games battle for your attention and time 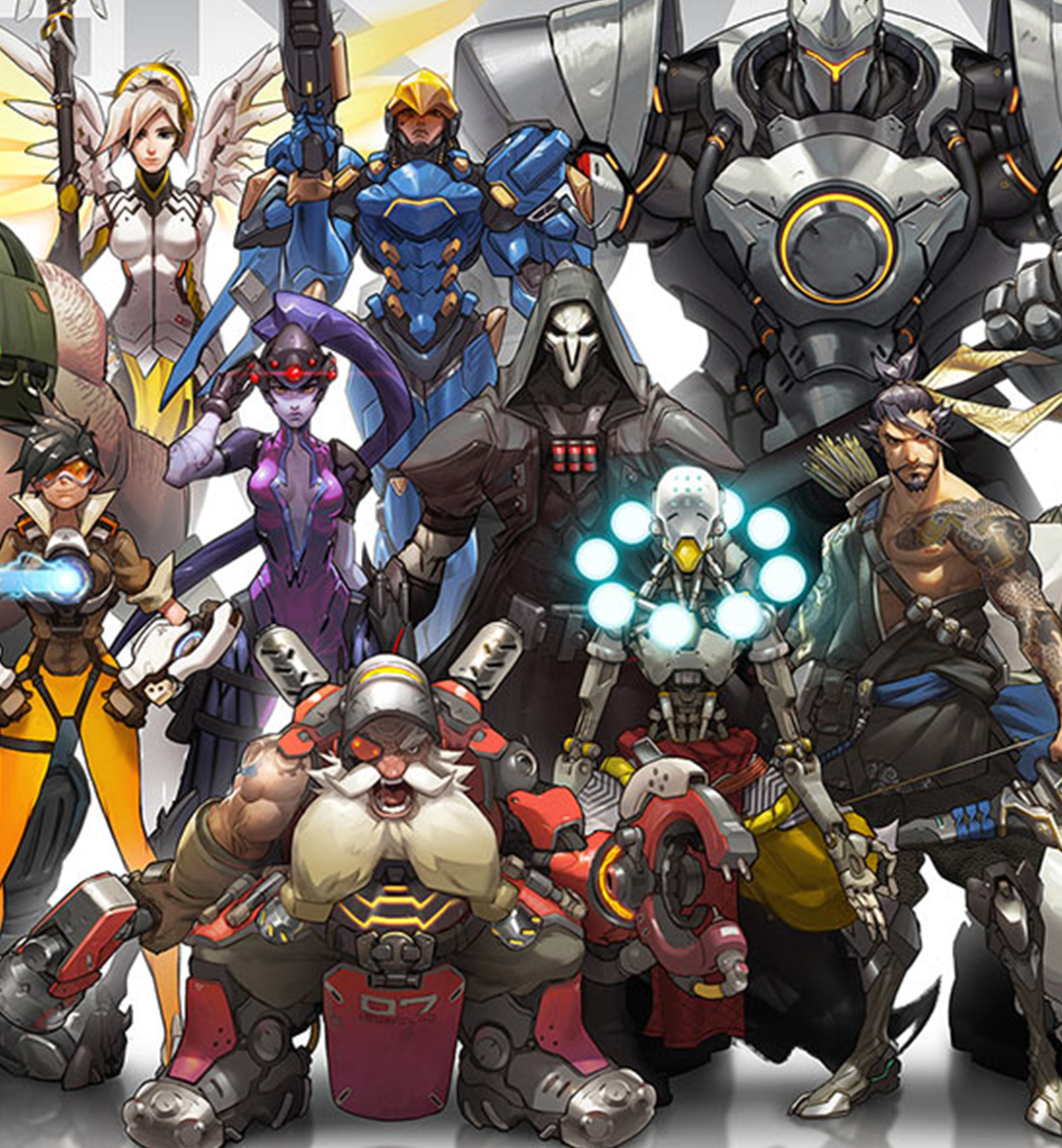 After Blizzard Entertainment released the genre-defining Overwatch game on May 24, 2016, the quintessential “hero shooter” quickly grew into a multimedia juggernaut that dominated Twitch live streams, spawned an Overwatch esports league and inspired incredible art, cosplay and even Legos. Even though Overwatch has introduced new heroes, maps, modes and seasonal events over the years, the game has reached a point where the updates have slowed down and all eyes are awaiting the sequel. Until Overwatch 2 arrives, you may need games like Overwatch to play.

There’s no denying that Overwatch 2 has become the talk of the town for the franchise’s dedicated fan base. As for the original release, Overwatch has taken a hit in live-streaming popularity, but it is still an engaging multiplayer experience worth playing. Once Overwatch 2 emerges, the massive communities for both games will merge into one, as the two games will combine for a cross-compatibility enabled platform.

But again, if you find yourself in need of something similar to Overwatch or just desperate for a new online multiplayer addiction, then you’ve come to the right place. The games we’ve listed below emphasize team-based multiplayer skirmishes, class-based characters and plenty of fast-paced gunplay. All in all, these titles are in line with the themes present and beloved in Blizzard’s celebrated first-person shooter.

1. ‘Paladins: Champions of the Realm’ 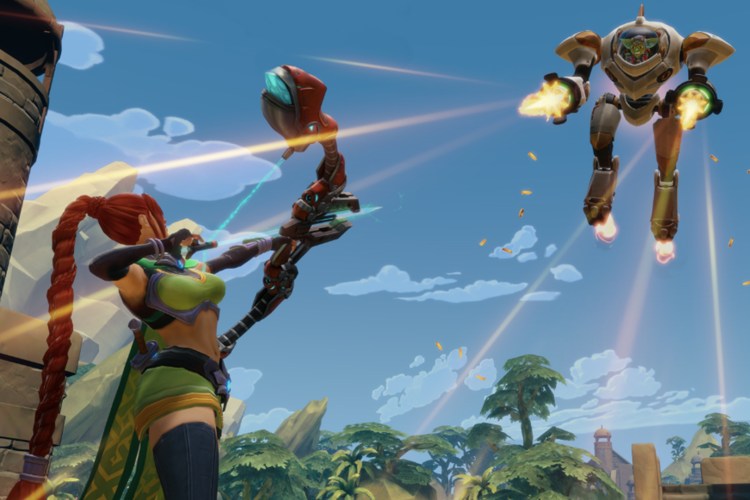 The closest thing to Overwatch in terms of art style and gameplay mechanics is Hi-Rez Studios’ Paladins: Champions of the Realm. However, don’t mistake this team-based FPS as a carbon copy of Blizzard’s mega-hit. Paladins’ theme rests primarily in the realm of fantasy, where firearms and magic come in abundance. The game’s satisfying array of Champions sticks to one of four classes: Front Line, Damage, Support and Flank. Mixing and matching each Champion with your fellow online magic wielders goes into figuring out the best ways to attain victory in Paladins’ collective match types. With a lineup of 42 Champions to master and an ever-evolving playlist of modes, Paladins is the perfect detour for Overwatch fanatics.

2. ‘Plants vs. Zombies: Battle for Neighborville’ 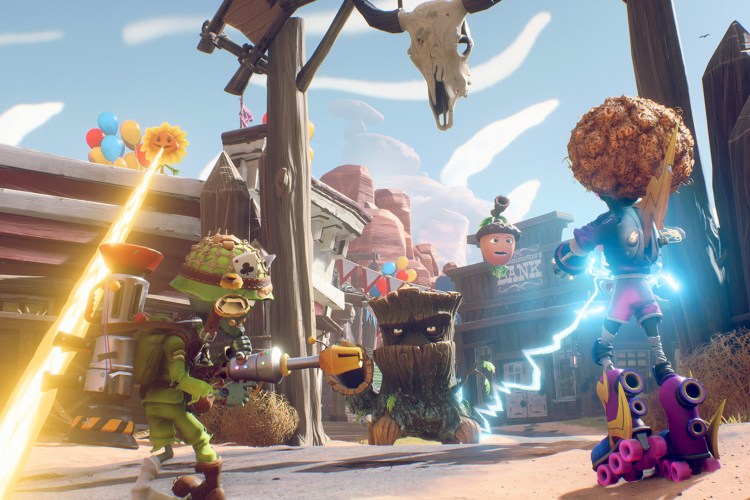 Those preppy plants and pesky zombies are back at it again. The never-ending war between both parties has reached a new plateau with the release of Plants vs. Zombies: Battle for Neighborville. The viewpoint might be different here from your average team-based shooter, but the mechanics are all the same. You’ll align yourself with either side, choose from a hilarious selection of zany character classes and hash out your problems with the opposition in the massive objective-based Turf War mode. Team deathmatch is also here and accounted for, plus there are open zones full of PvE (player vs. environment) missions to leap into. The more whimsical feel of Plants vs. Zombies: Battle for Neighborville endears itself well to the younger gaming crowd. 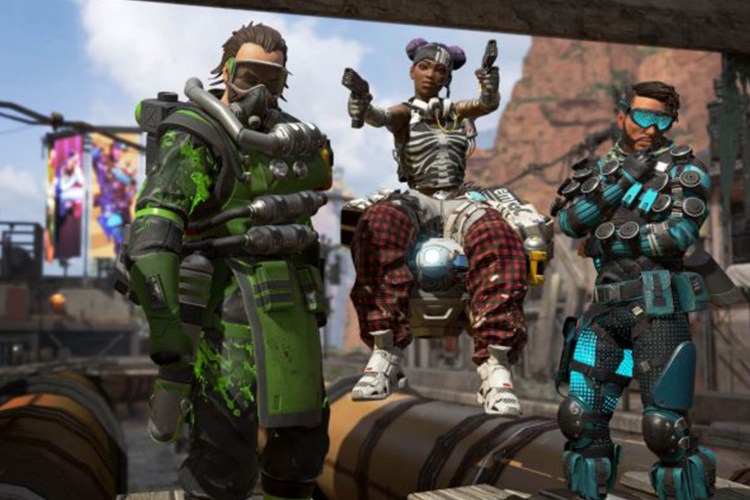 Yeah, we hear you. Apex Legends is the furthest thing from Overwatch since it’s more of a battle royale type of experience. And for everyone who says that, you’re not wrong. But if you’re the type of online gamer who gets their kicks whenever the focus is on efficient team play, then Respawn Studios’ free-to-play FPS is a highly recommended pick. Apex Legends has it all—a likable roster, a massive armory full of unique weapons, a spacious map and that oh-so-addictive feel that Overwatch players know all too well. The nail-biting moments that erupt when two three-person teams battle it out for the number one spot at the close of a match are always a joy to watch/play. In its current state, Apex Legends has included a new map, a Firing Range and the option to play in two-person Duos matches. Taking the plunge on this top-notch FPS comes free of charge, so feel free to join in on the fun. Flinging multicolored ink all over the place sounds like an incredible weekend activity in the real world. In the realm of video games, Splatoon 2 takes that exercise in fun and raises it to 11. Besides blasting rival squid kids with your own brand of ink, you’ll need to assist your teammates as you look to cover the most ground with your color in Turf War. And then there’s Salmon Run, a co-op Horde mode that pits you and a few friends against waves of vicious Salmonids. As a Nintendo Switch exclusive, Splatoon 2 does a good job of giving the platform a top-tier team-based shooter that’s unlike anything else. And hey, it has a single-player campaign to boot. So the replayability factor here is practically through the roof. 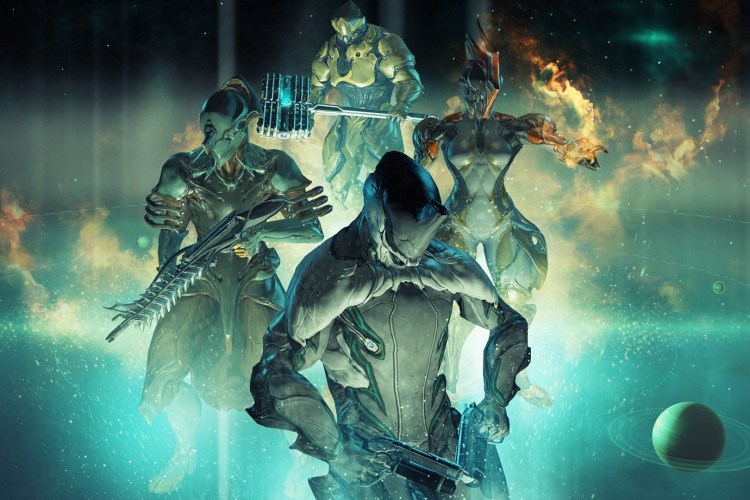 Warframe has been kicking around since 2013. The massive player base for Digital Extremes’ signature title has evolved into something grand. What’s on display here is a hybrid title that combines the best parts of third-person shooters, RPGs and stealth-based games. As an armored member of the ancient alien race known as the Tenno, you’ll build a custom Warframe suit and hop into flashy PvE and PvP encounters. Warframe’s continued popularity is due in part to its robust community, which is filled with approachable players who are more than willing to get you up to speed on its many intricacies. Now squad up with a bevy of beautifully designed parkour space ninjas and do your best to dominate the PvP themed Conclave. 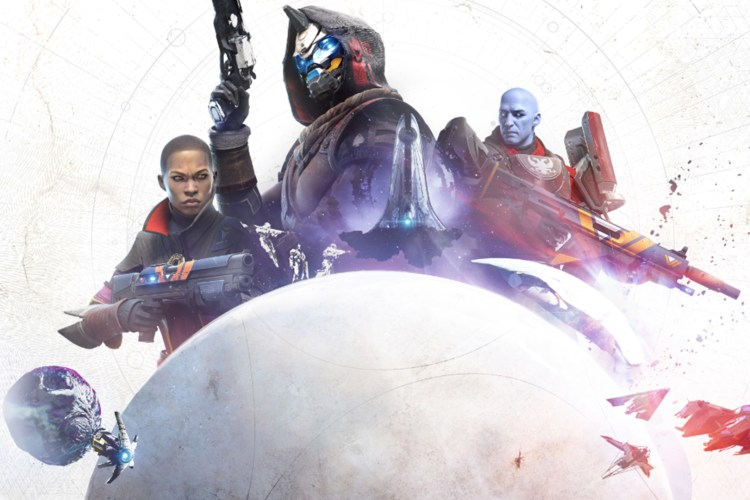 Bungie’s interstellar pride and joy has certainly had its highs and lows since launching in 2017. But as of 2019, Destiny 2 has lifted itself up to a time sink worth playing for hours on end. Balance adjustments, single-player/multiplayer game updates and the switch to free-to-play have given Destiny 2 a welcome refresh. You can choose to tackle the game’s huge slate of co-op missions, but the team-based competitive mayhem Overwatch fans are looking for exists within Destiny 2’s Crucible. While there may be only three character classes (Warlock, Hunter and Titan) to choose from, they’re all deep enough to the point where each players’ version of either archetype is completely different from the rest of the pack. 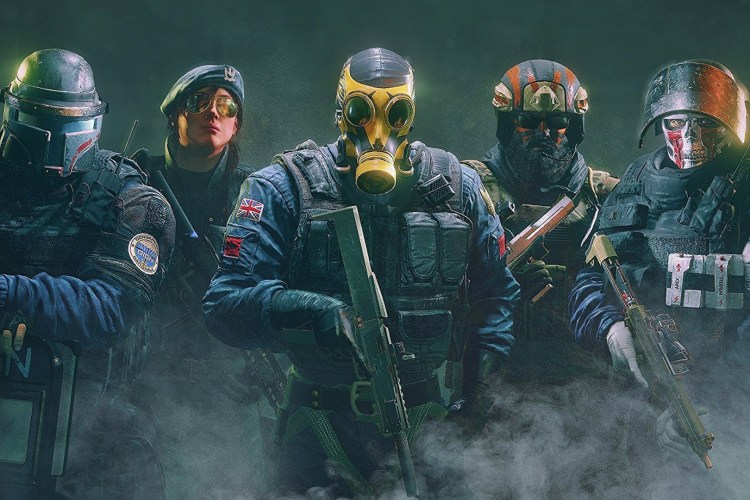 At first Rainbow Six: Siege didn’t exactly light the world on fire. While the game’s foundation showed plenty of promise for the future, its 2015 launch was marred by a slim selection of game modes and mechanical issues. Now, years of massive expansion packs have transformed Rainbow Six: Siege into one of the current-gen’s biggest multiplayer games. Running with a tight unit is the key to survival here as you hop into a ton of well-designed maps and take on a ton of enjoyable modes. Rainbow Six: Siege does away with the Pixar-flavored art style that powers Overwatch and adopts a darker realistic visual sheen. If you’re in the market for a more serious tactical multiplayer shooter, then this Ubisoft game staple is a worthy option. 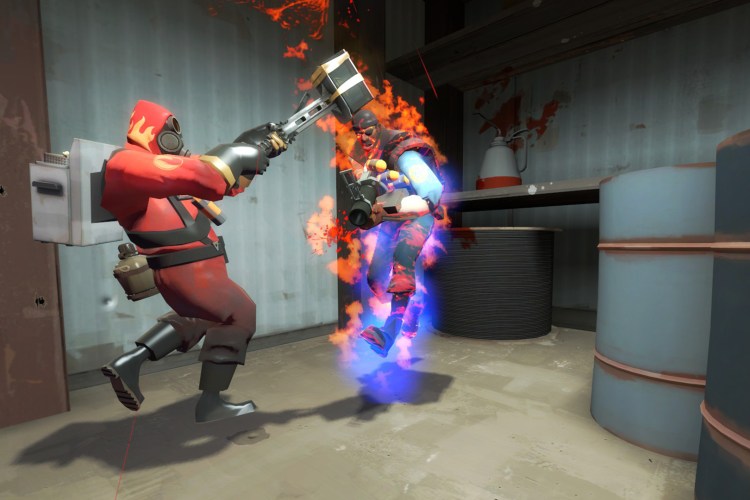 Valve’s iconic multiplayer FPS is the OG of team-based/character class filled games. Its cartoonish art aesthetic, penchant for delivering plenty of laughs and giving everyone a timeless experience has put in the hallowed halls of gaming greats. Overwatch certainly owes a lot to Team Fortress 2. The foundation that allowed Blizzard’s blockbuster shooter to thrive was put in place by the legacy left behind by Valve’s title. Learning about the game’s vast lineup of character classes and figuring out how to tackle each gameplay mode is an easy process thanks to the use of cinematics that break down both topics. Team Fortress 2’s community has kept it alive for years to come, and now’s the best time to hop into its zany world if you haven’t done so already. 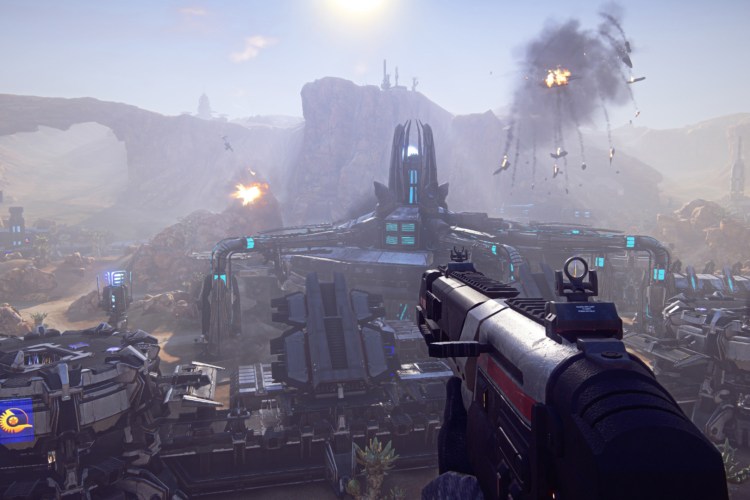 PlanetSide 2 originally landed on PC in 2012, then made its way over to PS4 in 2015. And through its lengthy run, the massively multiplayer online FPS has stayed on everyone’s radars due to updates being fed to it to this very day. If you want to talk about a team-based shooter worth giving the time of day, then PlanetSide 2 is definitely a part of the conversation. Full-blown wars erupt between a dizzying amount of live soldiers across the continents of the game’s fictional planet Auraxis. A battle can go so long that day changes to night, which goes a long way toward changing the battle strategies of warring factions. Pick an empire, get in tune with the game’s six battle classes, meet the needs of your squad and grab victory by the interplanetary horns. 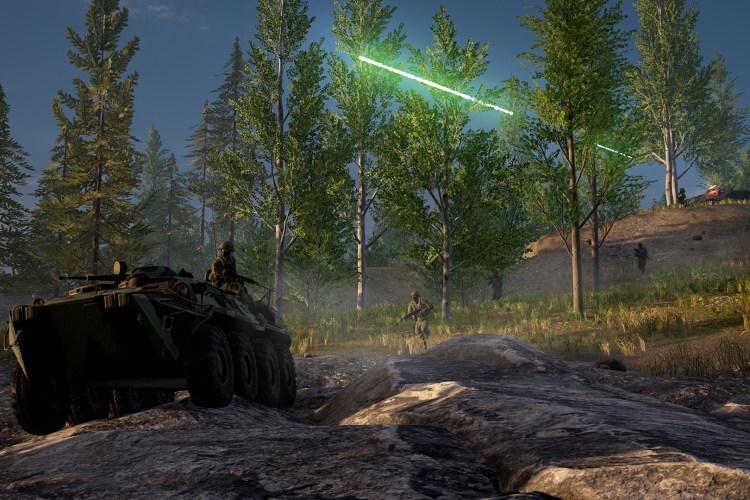 Despite its simple name, Squad is far from a mindless shooter. Once you’re thrown onto the battlefield, you’ll need to push your squad to victory as you contend with tons of other opposing soldiers. Each player can choose from three classes (riflemen, medic and anti-tank) as you work diligently to complete all types of changing objectives. Squad’s real-world authenticity gives it the extra leg it needs to grab your attention, while the large-scale locales and huge focus on player communication will keep you. Bring a headset and prepare to hit the ground running when you attempt to hop into Squad. 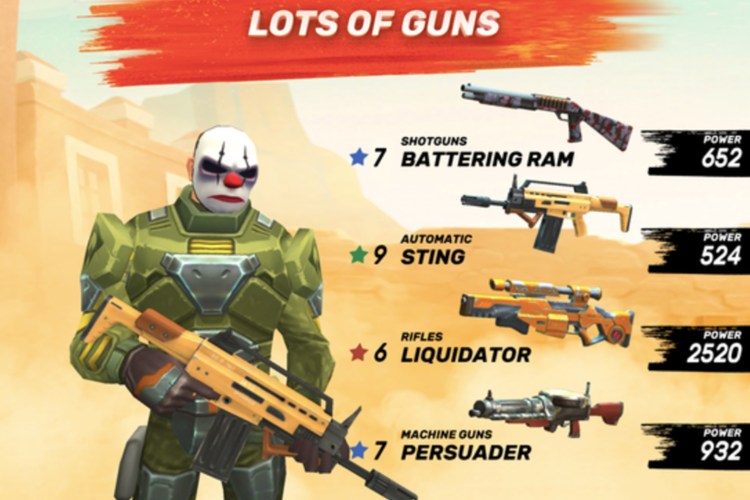 Over on the mobile side of things, there’s a nice selection of games that replicates the most enjoyable aspects of Overwatch. Near the top of that list is Game Insight’s easily accessible PvP hit Guns of Boom. The barrier to entry is super low, so just about anyone who’s looking for an Overwatch-like game on the go can hop right in and have a good time. There are many cool character customization mechanics at play here that allows every player to craft a memorable hero. Guns of Boom is regularly treated to updates through competitive seasons full of game-changing events, so it never feels abandoned by its developers. It’s even possible for you to go all “serious esports player” mode with this mobile shooter. It’s worth taking a chance on Guns of Boom if you’d rather body the competition during your morning commute. 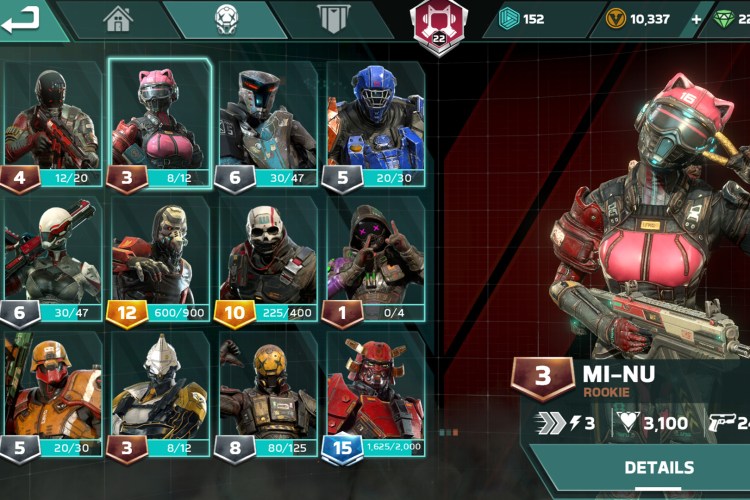 The final game on our list is another mobile title. And this one just so happens to come from the handheld gaming platform’s biggest FPS franchise. Modern Combat Versus sticks to the multiplayer online shooter mechanics you’ve come to know thanks to its offering of more than 17 specialized agents, well-designed maps and console-like presentation. It sticks closely to its futuristic military aesthetic, which gives Modern Combat Versus’ agents Crysis-like armor types. With top of the line graphics, balanced gameplay and easy to approach mechanics, Modern Combat Versus is the team-based FPS that’s worth sucking up your smartphone’s storage space for.

Free to Play
Slide 1 of 3
Did you like this article?