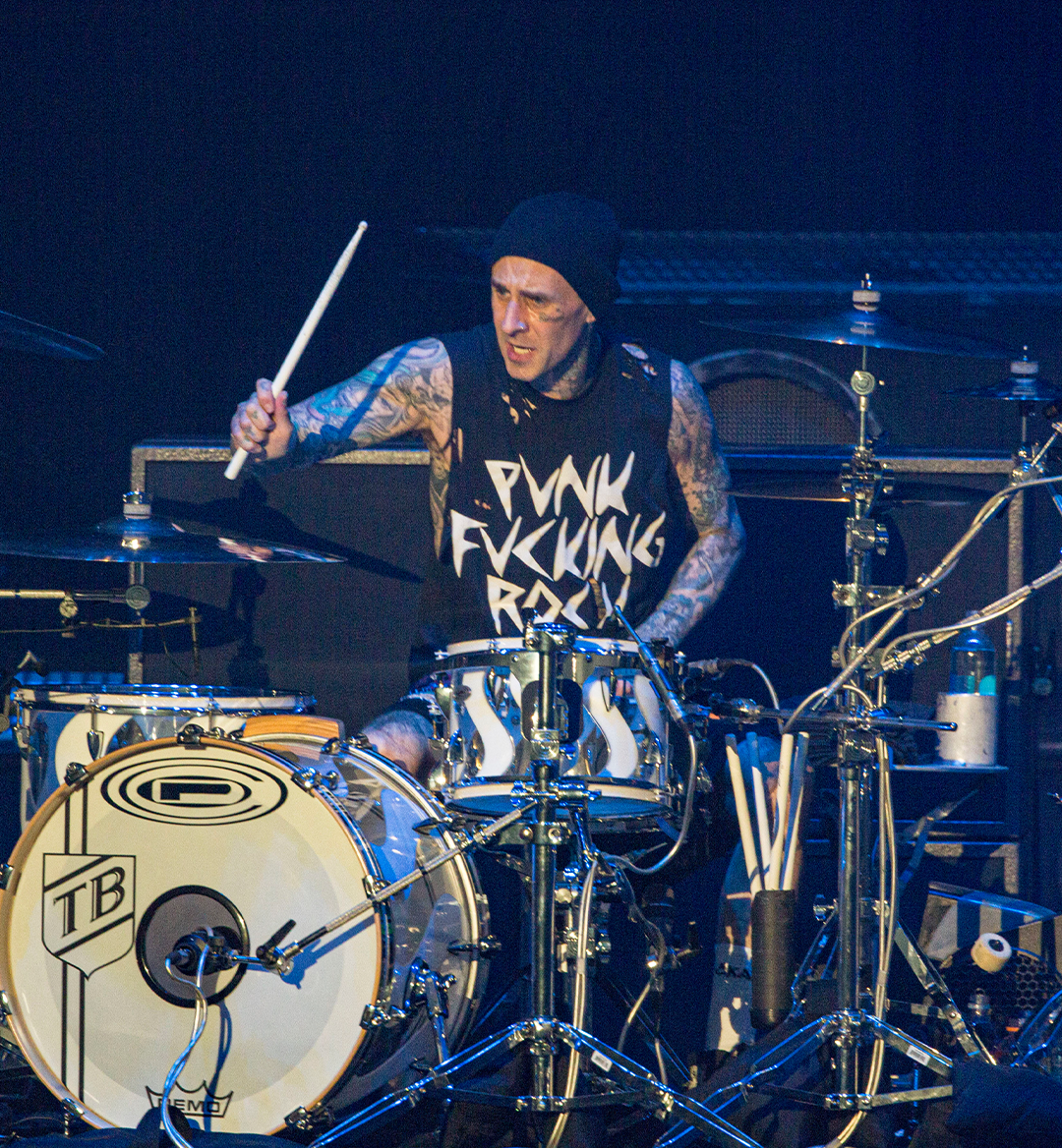 You know Travis Barker—he’s a seminal figure in emo pop-punk history as the lead drummer of Blink 182, a newly-established reality tv stalwart thanks to his marriage to Kourtney Kardashian, plane crash survivor and a memoirist. Over the last ten-ish years, he’s also sneakily built up a discography  as a hip-hop power player that rivals just about anybody else in his genre. Under his auspices, hip hop has entered its new pop-punk era with Barker shaping a new generation of heart-stricken crooners such as Machine Gun Kelly and Iann Diorr. Here are Travis Barker’s biggest hip hop moments as he transitions from rock drummer to all-purpose musical guru.

Every piece of this video feels dated—the shaky, out-of-focus footage that looks like it was captured with a camcorder, the title’s “(EPIC DRUM COVER)” parenthetical, the very fact that it’s a rock-music-adjacent rendition of “Crank Dat” by Soulja Boy. Filmed in the late 2000s, Barker’s Soulja Boy cover was part of a series of remixes of popular rap songs that Barker uploaded to YouTube during this period—his version of Flo Rida’s “Low” was similarly well-received. While Barker wasn’t yet creating original hip hop music, these little viral showcases demonstrated his comfort blending different styles and genres.

This 2010 collaboration between Barker and southern rap legend T.I. marked one of Barker’s earliest forays into hip hop. Although the song doesn’t carry the Blink pop-punk hallmarks of Barker’s more recent work, the Blink 182 drummer’s fingerprints are apparent in the crisp drum pattern and the wailing electric guitar in the background. “Yeah Ya Know” might not have made waves as a hit single, but it laid the foundation for Barker’s future successes, legitimizing him as a serious hip hop producer outside of the purview of his day-job as a drummer.

People don’t take Pitbull seriously and it’s not hard to understand why. He makes silly songs! And while Pitbull is largely regarded as a remnant of the confusing mid-2000s culture that had people wearing lens-less glasses, his embrace of Travis Barker in 2016 seems downright visionary in retrospect. To be sure, “Bad Man” isn’t a traditionally good song, but Pitbull and Travis Barker make it listenable through sheer force of charisma.

In the summer of 2019, 03 Greedo was in high-demand, working with super-producers such as DJ Mustard and Kenny Beats during his final days of freedom before the start of a lengthy prison sentence in Texas. Naturally, though, Greedo found time to link up with Barker, laying the ground-work for Meet the Drummers, a five-song EP. Even across these five songs, their chemistry is clear on standouts "Cellout' and "Trap Again." For years, Greedo has described his sound as “emo music for gangbangers;” with Barker, he evidently found his perfect emo music muse.

Whereas most of Barker’s collaborations are with big-name artists, UnoTheActivist is still relatively underground. Combining Playboi Carti’s idiosyncratic vocals with Gunna’s unwavering chill, Uno makes prototypical, blissed-out Atlanta-style trap music. More, working with Uno represented an opportunity for Barker to dabble with a new sonic palette. As such, Might Not Make It sounds unalike any of Barker’s earlier hip hop projects while still maintaining the general pathos of his other work.

7. Machine Gun Kelly, "Tickets to My Downfall" and "Mainstream Sellout"

For the last decade, it’s felt like an inevitability that Machine Gun Kelly and Travis Barker would collide at some point—Kelly is a “rapper” who’s pined for pop-rock stardom; Barker is a pop-rock idol who’s transitioned into more hip-hop-ish territory. On 2020's Tickets to My Downfall and 2022's Mainstream Sellout , Barker positions Kelly as a new-age Mark Hoppus, smirkingly tearing through hook-y, uptempo pop-punk songs. It’s a natural fit for both Kelly and Barker—in Barker, Kelly finds the legitimacy to credibly switch his sound; in Kelly, Barker has the frontman to recapture the star-making energy that defined Blink 182 and has has now drifted back into the zeitgeist. Together, they combine for one of Travis Barker's biggest hip hop moments, if not his single biggest so far.

Venice Music Shows Artists and Their Teams How to Properly Build