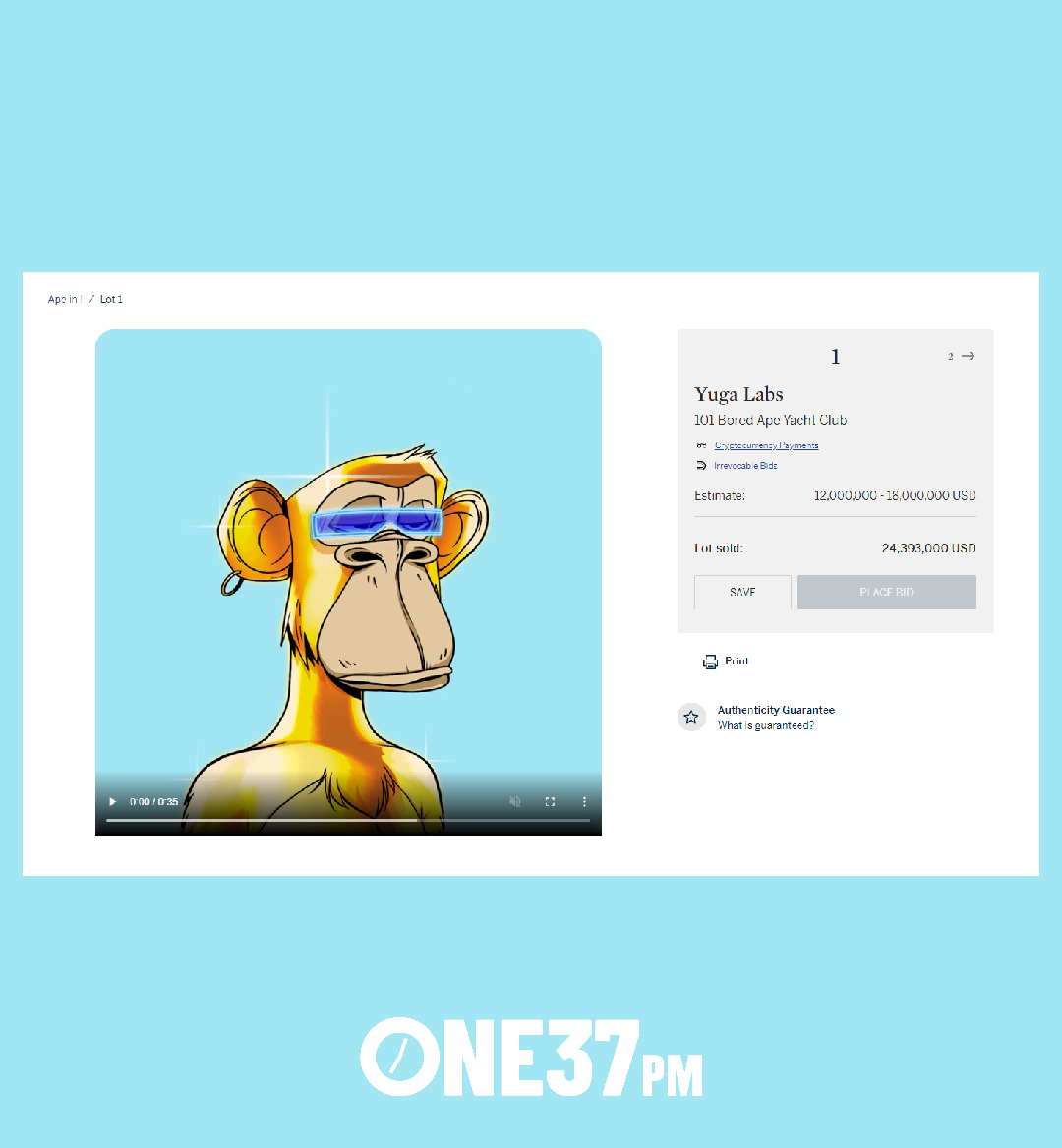 The 101 Bored Apes Lot at Sotheby’s included some of the most sought-after traits in the collection, including Solid Gold Furapes, Blue Beam Eyes, Trippy Fur and Bored Pizza. It also included three M1 and M2 mutant serums which allow the holder of the Bore Apes to generate a new Mutant Ape Yacht Club NFT. The Mutant Ape Yacht Club is the most recent—and final—generation of NFTs for the current phase of Yuga Lab’s NFT collectibles.

In the months leading up to the auctions, the community rallied around Bored Apes by donning the artwork as their social media avatars. Several celebrities recently joined the Bored Ape Yacht Club by flexing their new profile pics on Twitter, including Steph Curry and The Chainsmokers. The adoption of NFTs by celebrities, along with the strength of an active community that advocates for the brand, pushed Apes to the forefront of leading NFT projects. Bored Ape Yacht club has the third all-time highest trading volume on Opensea, following projects like Art Blocks Curated and Crypto Punks. In addition to their community, Bored Ape Yacht Club has been leveraging its IP to create brand collaborations with leaders in the streetwear industry including The Hundreds. RTFKT, a leader in AR/VR fashion, has also recently teased a sneaker collab.

one of the things 🦍👟@BoredApeYC only pic.twitter.com/538PMjNRl7

After the auction at Sotheby’s, the Bored Ape Yacht Club will be hosting a BAYC Riverboat celebration in the Decentraland Metaverse. They will be celebrating their first auction by hanging out with fellow Apes and playing some blackjack and roulette.

Bored Ape Yacht Club continues to grow its presence in the NFT space and gain more recognition in mainstream media. Their appearance at Sotheby’s continues to push the project closer to mainstream audiences and solidify it in the NFT history books.

On October 1st, Christie’s will sell a complete set of Curio Cards, including a secret rare card. Curio Cards launched on May 9th, 2017, and is the first Art NFT project on Ethereum, featuring 30 unique series of cards from seven different artists, pre-dating both Cryptokitties and CryptoPunks in the original ERC-721 standard. This will be Christie’s first NFT sold at the live auction, and will also be the first ETH-only estimate provided. The current floor price for Curio Cards on Opensea is 1.09Ξ and the project has done over 26,000Ξ in trading volume.

Christie’s also recently announced the sale of Art Blocks Curated: Sets 1-3, as part of their Post-War auction in New York on October 1st. This lot will also be conducted live in ETH.