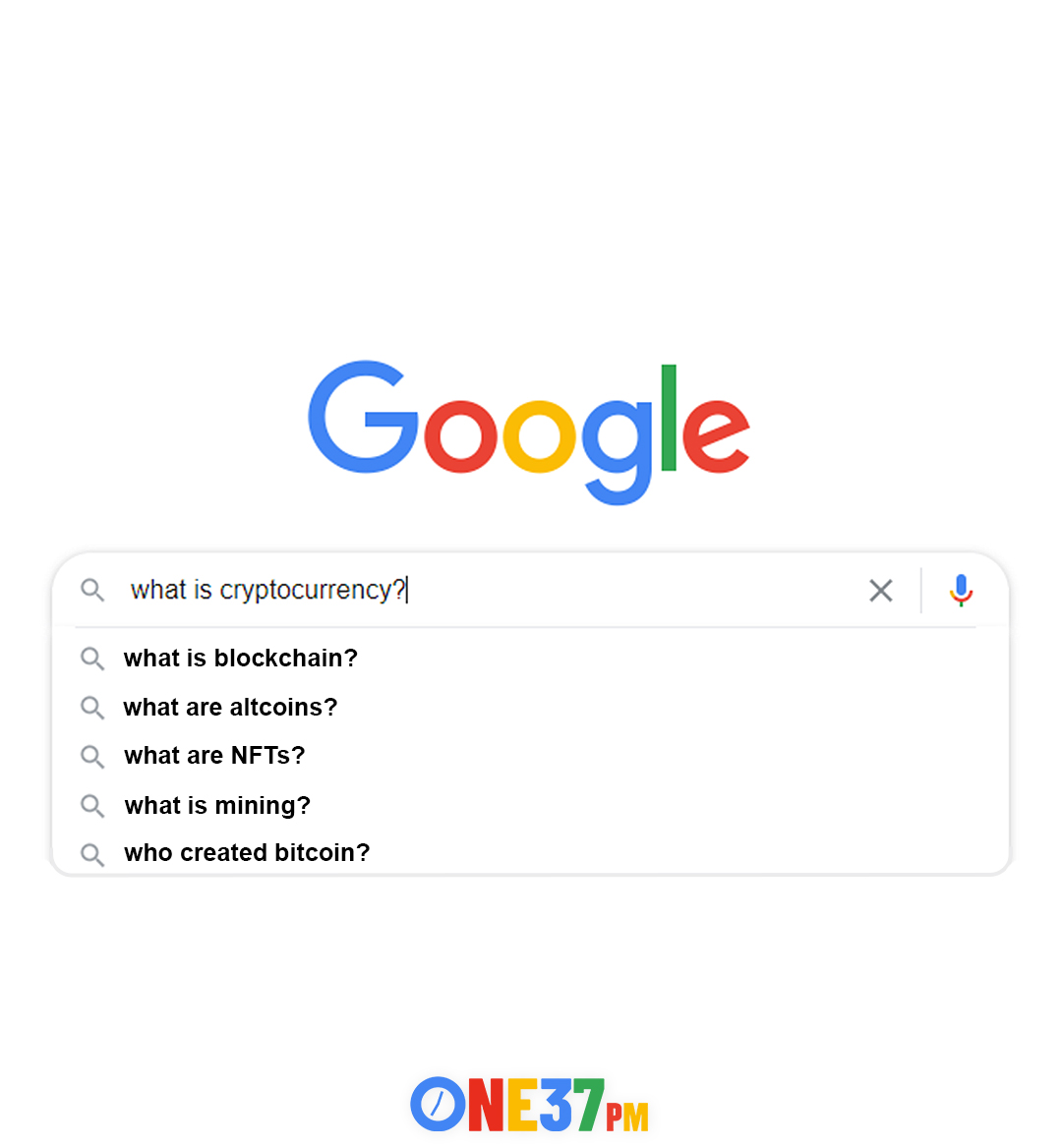 Every time a transaction is confirmed, the value of your wallet is updated based on your address. Addresses may appear in different formats depending on the currency, but most look something like this: 17VZNX1SN5NtKa8UQFxwQbFeFc3iqRYhem (this is a fictional address, I respect your intelligence… but please do not send crypto here or use this address for any other purpose).

If you are confused by all this, the answer is yes, you shouldn’t have Cash apped hot dog stand guy to send you Bitcoin.

Altcoins = any crypto coins not named Bitcoin. Okay, don’t know much about Bitcoin? Here’s a good Bitcoin intro and refresher.

Anyway, since Bitcoin launched in 2011, thousands of altcoins have emerged. Some coins disrupt markets and shape industry trends, while some coins are hot garbage ridden with financial crime. Most of the popular altcoins serve some real-world function. Sorry, Dogecoin.

Ethereum is currently the world’s largest altcoin, but look out for these altcoins in 2021.

‘Blockchain’ is one of those buzzwords. I still don’t think half the people who use it really understand what it is. Back in 2016 when I first learned about cryptocurrency, I associated the word blockchain with some strange blackhat Russian operation. Don’t ask.

A blockchain is a digital ledger composed of all the transactions ever made in a particular cryptocurrency. These transactions are made up of ‘blocks’. When a block reaches its capacity, a new block is created and so forth. Some blockchains have a limited number of blocks by design, whereas others have an infinite market cap.

A blockchain like Bitcoin is completely public, so everyone can see every transaction. It’s funny because most folks associate Bitcoin with the early days, where it was a breeding ground for illicit drugs and firearm deals. But the more Bitcoin goes mainstream, the easier it will be to trace a transaction to a particular individual. Especially on centralized trading platforms that use KYC measures.

A blockchain like Monero, however, is completely private. It is impossible to link a transaction to any address. That is one of its core features, and attracts users interested in making completely anonymous transactions.

On a blockchain, there is no central location where the ledger is stored. Rather, it is copied repeatedly on different computers and servers around the world. Thus, it is considered to be decentralized.

Speaking of decentralized, you should probably know about dApps. These are open-source applications built on a blockchain intended for real-world use. Ethereum is considered the mother of dApps. Ethereum was founded on the idea of enabling developers to create new applications on top of their blockchain.

There is no one-size-fits-all definition for dApps. But as BlockGeeks puts it, all dApps have a few things in common: they are open-source, decentralized, incentivized (validators need to be rewarded with cryptographic tokens) and have a protocol (the community agrees on a cryptographic algorithm that can be widely adopted).

Some ETH-based dApps are now worth millions in market cap, and in theory, a dApp can become as valuable as any other company or product.

Start paying attention, and you’ll see this term thrown around on Twitter. You should probably know what it stands for.

A digital currency depends on trust—you rely on multiple institutions to carry out a transaction. Crypto, on the other hand, is trustless, you can verify transactions and records of the address you are transacting with in real-time.

In other words, you can’t see the transaction history of your counterparty and third party payment processor when you go to sell a pair of shoes on StockX. You trust Paypal (and your bank) to safely and securely carry out that transaction.

We touched on the concept behind public ledgers—that place you go to view all transactions made on a blockchain. DLT refers to a distributed ledger, another term for blockchain technology. When you see DLT, think blockchain. Take note of that.

Fiat currency is 1) government-backed and 2) not backed by any commodity (like gold). Those green US dollars in your wallet? That’s fiat currency. The value of US dollars rely solely on our collective faith in the institution of the United States government. If the US crumbles, so does your fiat.

When you make a transaction on the blockchain, you have to pay a fee. That fee is called a gas price. You are basically paying a miner to go out and receive crypto for you. You can choose to pay higher fees for faster transaction speeds, or lower fees for slower transaction fees.

Gas prices are one of the biggest challenges facing cryptocurrency markets. If we find a better way to drive down energy costs for transactions, crypto will become more ubiquitous.

Comparable to the traditional Initial Public Offering (IPO), an ICO is a new method for projects and startups to secure funding. Pretty much anyone can participate in an ICO. More importantly, it’s about finding the right fit for investors and founders, according to Jonathan Chester, Founder & President of ICO consulting firm Inwage.

KYC is a compliance term. It will probably come up if you take a more mainstream approach to purchasing crypto. Major platforms like eToro and Coinbase require KYC as part of their onboarding process. KYC refers to “knowing your customer”. Regulators require identity background checks for new banking clients as a means to deter money laundering and terrorist funding. The financial regulation of crypto is here to stay, so expect to see that acronym more and more as governments scramble to tie blockchain transactions to citizens.

Mining is the process of verifying new transactions on a blockchain. When someone donates computer power to a miner to complete an encryption challenge, that donor is then awarded crypto.

If you’ve been following ONE37PM at all these past two months, you’ve probably heard about NFTS. Non-fungible tokens enable virtual transactions between collectibles like art, music and trading cards using smart contracts. For more info, check out this comprehensive guide on NFTs.

This is the super-important string of numbers and letters you should not share with anyone. If someone is able to access your private key, you can lose your funds in a matter of seconds. This key is necessary to verify transactions when selling or withdrawing your crypto.

The following terms are a little technical but important for folks who want to understand how different blockchains function.

In a blockchain operated under Proof of Authority (PoA), a few specific nodes are granted the right (or authority) to approve a miner’s ability to create a block. This is a faster alternative to the proof-of-work model, but more centralized.

Proof of Work is a more traditional method to award miners for their effort. It requires miners to show their effort by tying a variable to the process of hashing a transaction. A hashed block proves work was completed and awards the miner. This takes up a lot of energy.

Proof of Stake allows a person to validate or mine cryptocurrency based on the number of coins he or she owns. Under this model, the idea is that a miner will be less likely to attack a network if they have a stake in the game.

Each blockchain has its own ledger. Here’s a link to Bitcoin’s public ledger. This is the place where you can view every transaction ever made on a blockchain, given that it’s public. Some coins distinguish themselves by operating on an anonymous or private ledger.

Satoshi Nakamoto is the individual, or group of individuals, credited with founding the world’s first cryptocurrency, Bitcoin. The founder of Bitcoin remains completely anonymous.

If you see the term ‘satoshis’ thrown around, that refers to a fractional unit of Bitcoin. You can transact with satoshis. I once heard some lady on CNBC who was bearish on Bitcoin because “the average consumer doesn’t want to make a purchase with 0.0003 of something”. She clearly does not understand how Bitcoin works. Facepalm.

The seed is the foundation of your wallet’s digital existence. A recovery seed is a series of twelve, sometimes sixteen words that can be used to access your wallet if something goes wrong and you lose it.

Your recovery seed is the equivalent of asking twelve security questions for a forgotten password. But compromising these security phrases will cost you a lotta dough, a lot more than losing a Facebook account. Once your wallet is compromised, your funds are gone forever. Please don’t share this with anyone unless you enjoy losing money.

Another tech term, SEGWIT refers to the process that separates digital signature data from transaction data. This allows more transactions to fit on one block, increasing the speed of transactions. Put simply, it’s a good value-add for blockchains.

A core feature of the Ethereum blockchain and NFTs, smart contracts are just your typical boring legal contracts… only they're written in computer code.

Smart contracts hold multiple parties accountable for something, just like a normal legal contract, but it instructs each party through code rather than spoken language. Both parties can see and approve of the programming before accepting a contract’s terms, making it completely transparent.

Seems simple enough. I know what a wallet is. But a digital wallet can be a little bit trickier to understand.

A crypto wallet is the place where your coins are stored. Your wallet must contain seeds, keys, and addresses to function properly. There are several types of wallets, such as hardware and software. If you use a mobile app to store your crypto, that is an example of a software wallet. I personally use a hardware wallet to store my crypto.

Hardware wallets require a bit more knowledge but provide more protection for users than software wallets. Why? Well, if someone hacked into Coinbase (they have loopholes), then I can lose all of my crypto. Unless the recovery seed physically stored in my house is somehow compromised by strangers, it is virtually impossible for someone to hack into my hardware wallet.

A whale is the term used for the most valuable Bitcoin addresses. There are about 2000 Bitcoin whale addresses, and only three own more than 100,000 BTC, according to BitcoinPlay.

When you think of Bitcoin whales, think of folks like Tim Draper, Barry Silbert and the Winklevoss twins. These folks have been advocating for Bitcoin since the early 2010s.