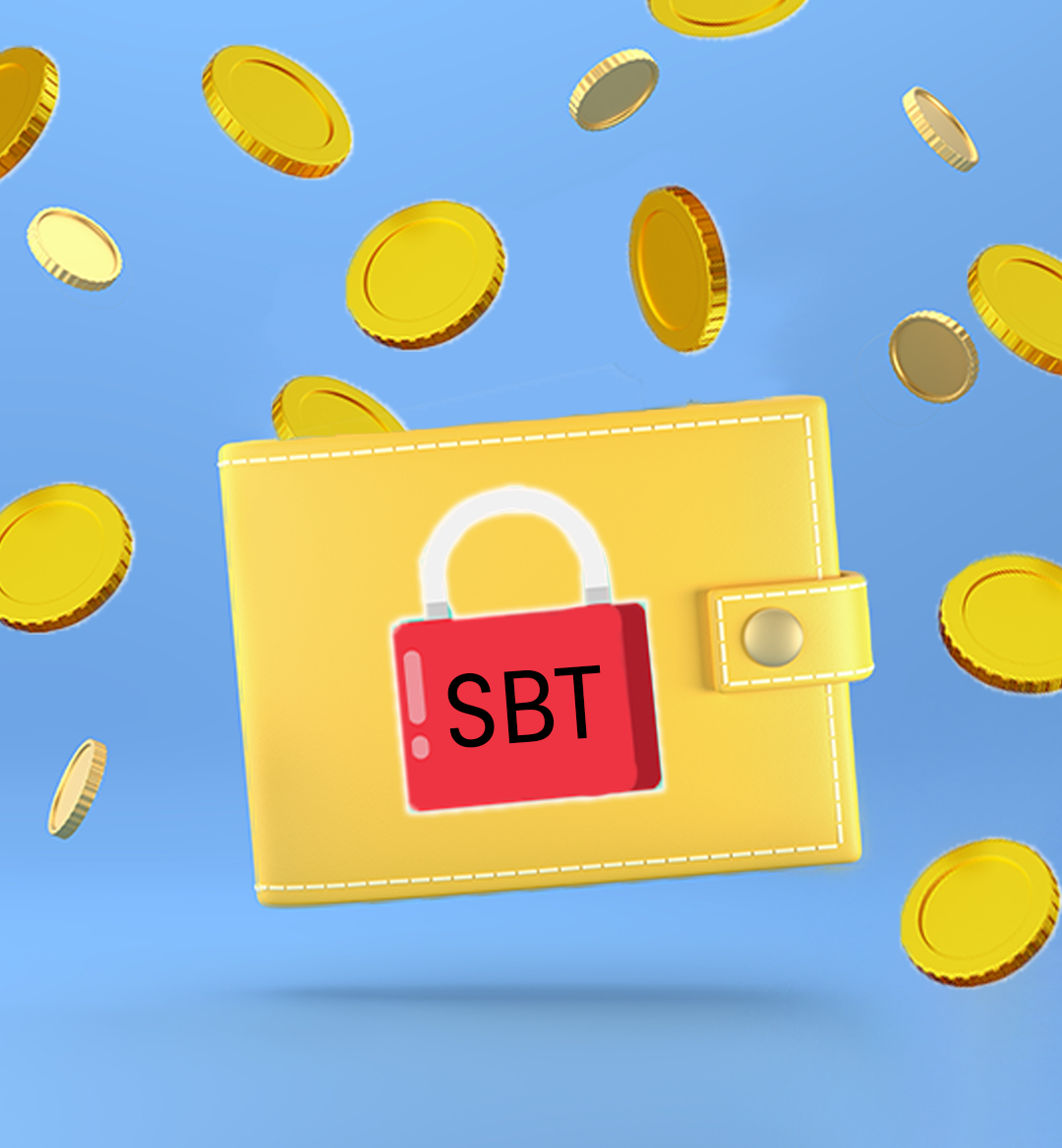 The whole point of web3 is to create a system of transparency that supports trust between all parties to empower a decentralized society. However, the current web3 market focuses on transferable financial assets, rather than encoding social relationships of trust. That’s why Ethereum’s Co-founder, Vitalik Buterin, is creating Soulbound Tokens (SBTs).

Creating a completely decentralized economy is still far from reality, but Soulbound Tokens are a step in the right direction. Here is everything you need to know about SBTs.

What Is a Soulbound Token (SBT)?

Essentially, a Soulbound Token represents commitments, credentials, and affiliations. For example, say you attend an informative conference like VeeCon—considering such an event is a learning experience, you should be accredited for your newly perceived knowledge hence you receive a Soulbound Token.

You can think of SBTs as assets that act as an extended resume and are issued by wallets that attest to these social relations. These reputable issuing wallets are known as Souls (more on this later).

Ultimately, a Soulbound token doesn’t just represent an achievement or participation in an event, rather, it can represent an array of information. From personal information such as medical records and college degrees to being a longtime sports fan, SBTs aim to be accredited social tokens.

It’s important to note that SBTs would make little sense if they don’t originate from an accredited source, aka the Soul.

Souls can be used by artists and creators alike to stake their reputations on their creations. As a creator, you can issue a tradeable NFT from your Soul. This way, the more SBTs a creator holds, the easier it would be for buyers to verify the legitimacy of a Soul in association with the creator, thereby confirming the NFT’s authenticity.

Additionally, Buterin and his co-authors note that “artists could go a step further to issue a linked SBT stored in their Soul that attests to the NFT’s membership to a “collection” and vouches for whatever scarcity limits the artist wishes to set. Souls would thus create a variable, on-chain way to stake and build reputation on the provenance and scarcity of an object.”

Considering all assets in web3 are easily transferable—therefore strictly collateral—there aren’t many options for offering people uncollateralized loans. Outside of web3, our current financial system utilizes centralized credit scores to determine how trustworthy a borrower might be.

With that, current scores have many flaws that aren’t taken into account and are generally biased towards minorities and the less fortunate. What if instead the willingness to lend someone something was based off other factors such as work history and rental contracts?

Thus, allowing Souls to stake meaningful reputation to avoid traditional collateral requirements and secure a loan. Vitalik and his co-authors elaborated on this very matter in their whitepaper saying these loans could be represented by SBTs.

“Loans and credit lines could be represented as non-transferable but revocable SBTs, so they are nested amongst a Soul’s other SBTs—a kind of non-seizable reputational collateral—until they are repaid and subsequently burned, or better yet, replaced with proof of repayment.”

Vitalik and his team also stated that SBTs offer useful security properties to prevent borrowers from escaping such loans.

“SBTs offer useful security properties: non-transferability prevents transferring or hiding outstanding loans, while a rich ecosystem of SBTs ensures that borrowers who try to escape their loans (perhaps by spinning up a fresh Soul) will lack SBTs to meaningfully stake their reputation.”

By incorporating these types of loans, new correlations between SBTs and repayment risk would emerge, leading to better lending algorithms that could predict creditworthiness and reduce the role of centralized credit-scoring entities.

Furthermore, SBTs could provide an opportunity for borrowers to partake in “community lending”, where members of a social network agree to take on each other’s liabilities.

“Because a Soul’s constellation of SBTs represents memberships across social groups, participants could easily discover other Souls who would be valuable co-participants in a group lending project,” said Buterin.

There are numerous benefits to the non-transferable Soulbound Token, all of which aim to create a more decentralized society. Below are several benefits of SBTs.

Although blockchain technology allows us to trace the time a particular digital asset was made, it fails to display social provenance (the source that first published the creation). That’s where SBTs can help. Soulbound Tokens enable us to trace the social provenance, providing us with in-depth context to the Soul that initially published the work. As a result, deep fakes could easily be identified since they are created outside of time and social context, while authentic assets would be easily recognizable being that they are issued by a reputable creator/supplier as SBTs.

Currently, a majority of web3 participants rely on custodial wallets that are managed by centralized entities like Coinbase and Binance. This means users of these platforms aren’t actually in control of their wallets or their assets within.

Current decentralized key management systems solve this problem, but lack user-friendliness. Solutions like multi-sig recovery work, with the tradeoff of ease-of-use and security. Another emerging solution called social recovery relies on a person’s trusted relationship, which is similar to the solution SBT offers—where the Soul is the intersectional vote of its social network.

SBT enables a decentralized key management system by utilizing a more robust solution that ties the Soul recovery to a Soul’s memberships across communities, thereby leveraging real-time relationships for security.

These types of communities could include off-chain entities like employers, clubs, colleges, and churches, as well as other on-chain entities such as a DAO. Hence in a community recovery model, recovering a Soul’s private key would require a member from a qualified entity of a random subset of Soul’s community to give consent.

These methods of communication would require greater bandwidth (the ability to carry richer “information entropy”) than on-chain bots or computation over SBTs themselves. 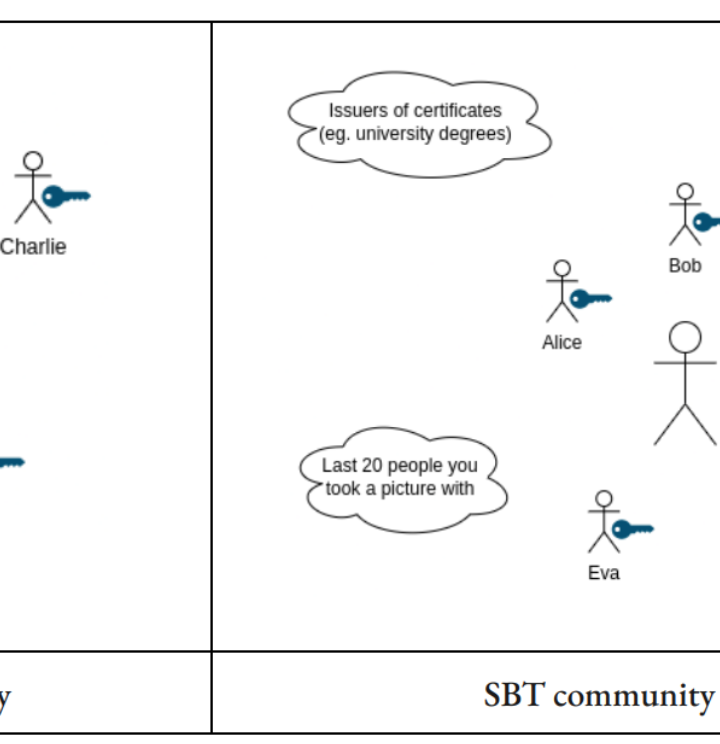 A decentralized autonomous organization (DAO) is a virtual community that comes together to support a common purpose by voting using smart contract technology. While DAOs have the potential to be a solid solution to coordinate with others worldwide, they are vulnerable to Sybil attacks—where a single user can create multiple wallets to harness more voting power.

Using SBTs, DAOs can significantly reduce the likelihood of a Sybil attack.

● Computing over a Soul's SBT structure to distinguish between real Souls and possible bots, and denying any voting power to a Soul that seems to be a Sybil.

● Checking for correlations between SBTs owned by Souls who support a given vote and giving votes with higher correlations less weight.

These are just some of the benefits that SBTs could provide to DAOs, among many other benefits that Souldbound Tokens could contribute to a decentralized society (DeSoc). With that, SBTs are just the first step to DeSoc, and what’s known about the technology doesn’t even encompass the potential impact it could have on virtual worlds.

He predicts that SBTs will be available for early uses by the end of 2022.

But, wait - what's the point of NFTs that can never be transferred?

Implementation of Souldbound Tokens could begin by the end of 2022. However, full adoption of the technology, specifically by the public, could take much longer. To learn more about Soulbound Tokens and how they are helping pave the way to a decentralized society, make sure to check out Vitalik’s whitepaper: Decentralized Society: Finding Web3’s Soul.