Vinnie's NFT project has catapulted him into the spotlight, with good reason 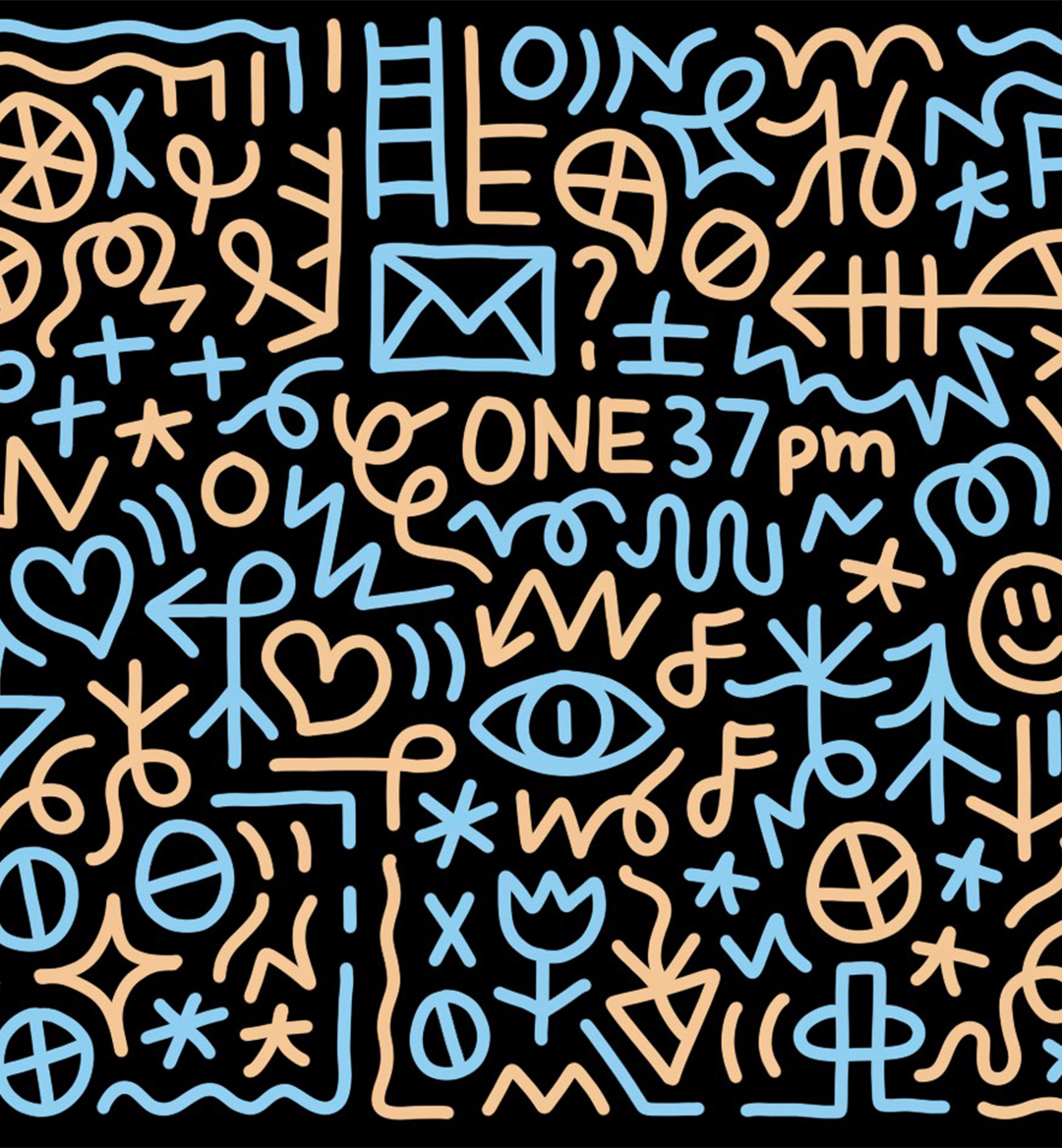 Artwork by Vinnie Hager for ONE37pm

It’s Saturday afternoon, the weekend after a long lineup of NFT NYC festivities. A crowd of people are huddled outside of a CBD store on Prince St., watching artist Vinnie Hager draw on a door.

He had announced on social media the day before that he would be doing a live art mural at this location. He even changed the time last minute, yet droves of loyal supporters still showed up.

Hager takes his time. He doodles a little, stops to mingle and chat, and continues.

If you look closely, he’s using his blue marker to draw sequences of symbols unique to his style, called “Iconography.” Though he has thousands of symbols, some of his most signature icons include an envelope, a peace sign, or an eye.

To the outside world, his drawings might just seem like scribbles. But they aren’t just squiggles—they’re a map to the inside of his mind and his world. And just like his art, Vinnie Hager’s mind is complex, abstract, and innovative.

His first NFT project, “Letters by Vinnie Hager,” launched just over a month ago and the project sits around a 1.5 ETH floor at the time of publishing. “Letters” was even on display in Times Square for NFT NYC.

Vinnie’s collection, made of 1000 hand drawn 1/1 pieces, features different colors and shape variations and are named after specific moments or things in his life.

“Some are inside jokes,” Hager said. “Or things I just want to capture as a moment in time and remember.” For instance, “2006 Rav 4,” was named after his friend's car.

Many have called Hager the “next Keith Haring” due to similarities in both artists’ abstract style and playful design. But, let it be known that he is not the “next” anything. He is the first Vinnie Hager.

Fans on Twitter seem to resonate deeply with his project. Many members of the NFT community have started to use “Letters” as a background for their existing profile pictures. For example, as a companion to a Bored Ape, Doodle, Cool Cat, or any other NFT.

One of the better Vinnie Hager Letters pairings with a pfp. Str8 🔥🔥🔥 https://t.co/n7c3DeatDH

When I found out I could mint @VinnieHager 's Letters I was on cloud nine. I couldn't help but show his work in my pfp.
I present to you 'Radio Head' by Vinnie Hager under my french cat 🥐 pic.twitter.com/RUWEIgdjDK

In fact, many of Hager’s first and most ardent supporters are from the Cool Cats community.

It’s hard to choose my favorite but I’m currently rocking this beautiful cat with one of @VinnieHager lovely letters imposed on the background pic.twitter.com/NYFmdk0VKk

Cool Cats was one of his first NFTs and the close bonds fostered through Cool Cats were what helped him find the team members for his NFT project.

“I bought it because it looked like me,” Hager said, referring to his cartoon cat with a black beanie. “I never imagined that all of this would happen. We just all had that connection and trust."

Tobias Woolner, who goes by the name Crypto Ted Lasso on Twitter, is a close friend and art agent. "Vinnie and I were linked through the Cool Cats community early on," Woolner said. "I quickly realized Vinnie had some of the most creative ideas I've ever heard from an artist. His mind works like his Letters look—beautiful, emotional, striking, and expansive."

"The rising price of the cats actually gave us a platform for initial trust. We all had these assets that had 50x’d in price and we weren’t selling," Woolner said. "That understanding of emotional art gave us a deeper understanding of each other and fostered a trust that is now almost impossible to break."

There’s something unique about how the NFT community can easily and continually transform internet strangers to friends, to coworkers, to lifelong friends.

A designer and UI/UX developer for “Letters,” who goes by the name “DOS,” says working on letters has been one of the most pleasant experiences he’s ever had.

“Even though I’ve only known the team for a couple of months, it feels like it’s been an eternity. I’ve come to realize that even though we all come from different walks of life, making the decision to be part of the same community proved that we are tuned into a similar frequency.”

With how close and connected they are, it’s crazy to think that just three months ago, they didn't even know each other.

I have the opposite of Artist’s Block, I'm just so restless and all I want to do is create.

It’s even crazier that just a year ago, Vinnie was a recent graduate of Maryland Institute of Art. He was living with his grandma, focusing on his art, grinding and doodling, unaware that web3 would change his life.

And even after thousands of followers and hundreds of volumes of ETH traded and earned, Hager is still the same humble and creative guy living in Maryland with his grandma. The only difference now is that he paid off his grandmother's home—in ETH.

“My grandma is a huge inspiration for me,” Hager said. “I think about her in every decision I make.” 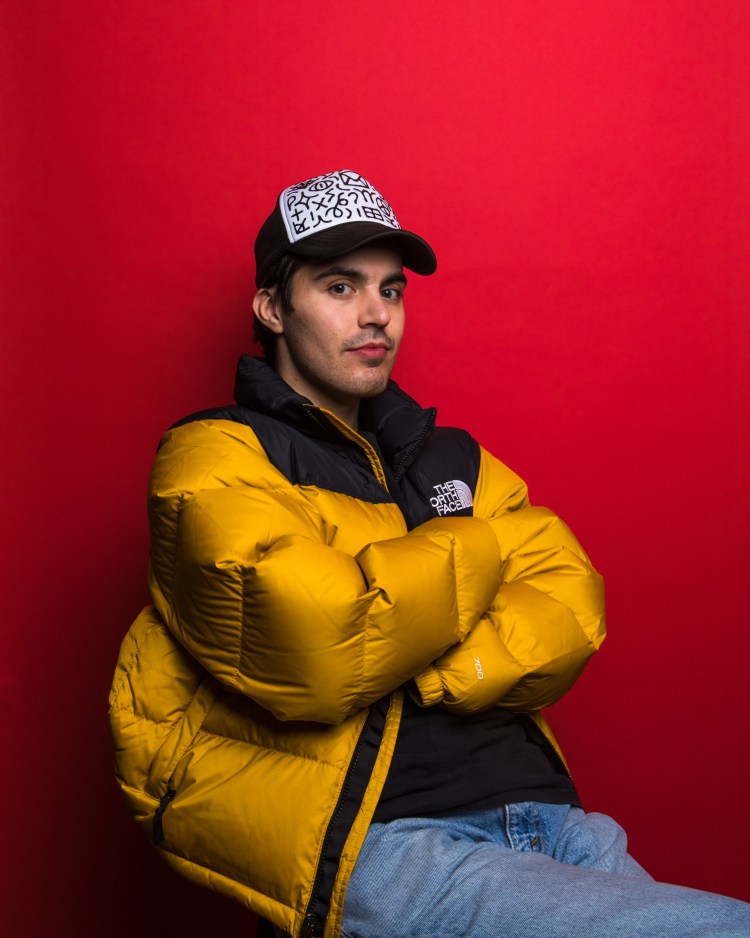 In fact, Many of Hager’s relationships and memories of growing up in Maryland influence his work. Hager says many of the “Letters” are inspired by casual and fond memories in Maryland.

“There’s ones like 'Drive Away Convo,' and I just remember making that title about talking to elderly neighbors in my grandma's neighborhood in the driveway.”

He also recalls a special bar in Baltimore that inspired three of his NFTs.

“There’s a bar in Baltimore with a blue room, yellow room, and red room,” Hager said. "They pay homage to places and moments I want to capture.”

A couple hours pass and the mural is finished. His blue letters shine against the black backdrop of the door. He says he didn’t have a plan for what would be on the door, he just drew whatever came to his mind. 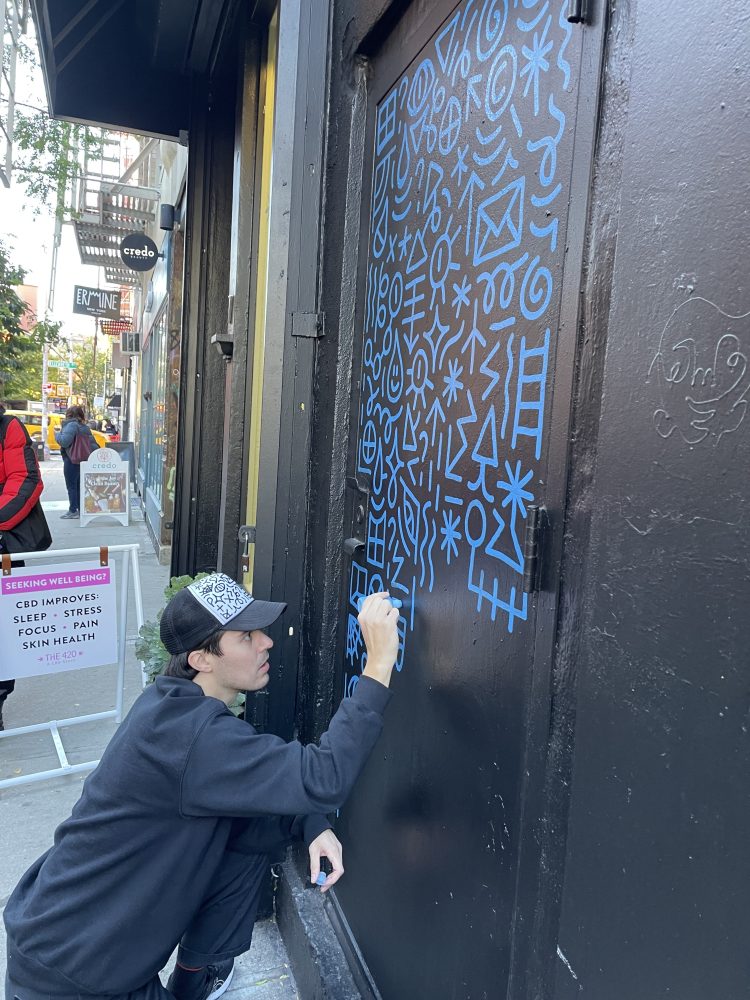 After, Hager takes time to draw and take photos with friends, Twitter mutuals, and holders of his NFT for another few hours.

Hager treats every person at the meet-up with the same kindness and candor, regardless of follower count, celebrity status, and whether or not they can afford to buy his NFT. He may be a budding superstar, but at the end of the day, he says it’s the most important that he’s an artist first.

As the sun begins to set and the long line of people continue to gleefully and willfully stand in line—holding their bags, shoes, and items for Hager to doodle an original 1/1 on—it’s crazy to think that he’s only just getting started.

The Future for Vinnie Hager and Letters

Some future goals include owning his own studio that he can create and share with friends and having his art featured as a balloon in the Macy’s Thanksgiving Parade.

But, other than these two things, Hager says he’s open minded and adaptable to what might happen in the web3 space. Maybe his dream project or collaboration doesn’t even exist yet. All he knows is no matter what, he wants to create.

“I have the opposite of Artist’s Block, I'm just so restless and all I want to do is create,” Hager said. “It keeps me up at night, there are so many things I want to create and build.”