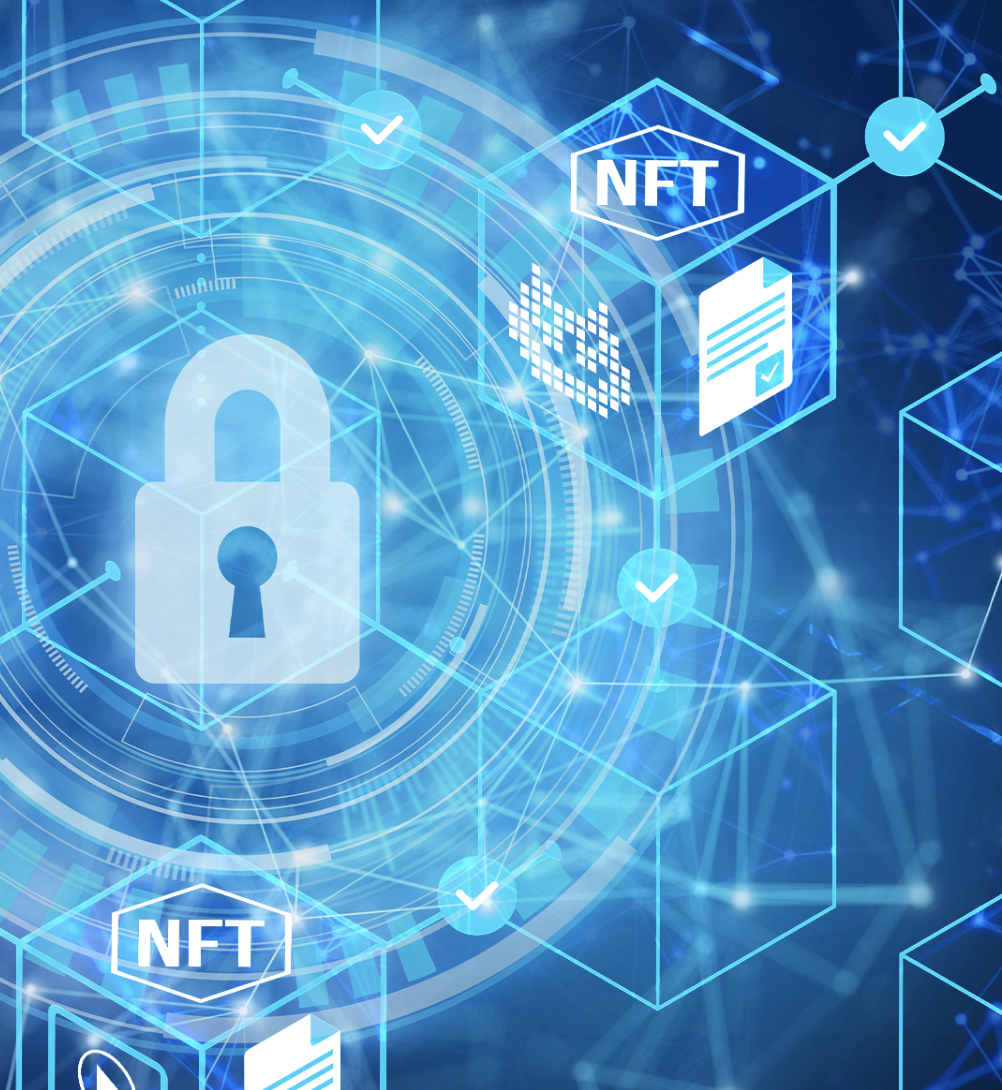 Blockchain has become a mainstream buzzword across the developed world. It's uniquely a hot topic in pop culture and various industries utilizing its technology.

With so many opinions and perspectives buzzing around the world about blockchain, it may be hard to understand what blockchain is and isn't.

So, what is blockchain technology, how does it work, and what are some use cases? This article will dive into blockchain basics and evaluate the emerging technology's pros and cons.

What is the Blockchain?

Blockchain is a fundamental concept in understanding the way cryptocurrency works. But it's not only limited to its application in crypto.

The blockchain is a database that stores information from transactional records in a universal ledger. Assets are traded and tracked on the blockchain, reducing risk and cutting costs for everyone involved.

Blockchain allows you to send money to a friend in seconds without worrying about banking fees and other charges. You can also store cash in an online wallet and don't need anyone's permission to move it or transfer ownership.

Every block on the blockchain has a specific number of transactions. When a new block generates on-chain, it's added to each network node's ledger and uses distributed ledger technology (DLT).

A key concept of blockchain is that it's decentralized, which allows for transparency and real-time access to assets. Being decentralized also enables the network participants to be collectively responsible for the security, as opposed to having a centralized entity like a bank or governing body.

Other fundamentals of blockchain technology include being immutable and distributed. Since the ledger is immutable, you can always trust that the information is accurate because no one can alter it.

Since the blockchain is also distributed, it potentially protects users from network attacks and other instances of fraud and cybersecurity threats.

How Does The Blockchain Work?

What is the purpose of the blockchain?

Here is a typical scenario of how to use blockchain technology to record cryptocurrency transactions: 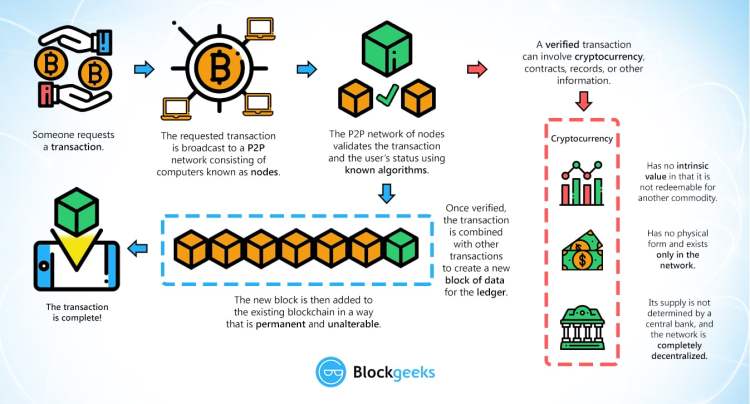 Since Bitcoin's blockchain is a public database, anyone owning it can view that same transaction record, although it's difficult to trace the identity behind a single account.

Aside from the cryptocurrency industry, many other sectors are interested in developing blockchain technology. Blockchain can also be helpful for cybersecurity, data storage, record-keeping, and data ownership.

Miners aren't people with shovels and pickaxes. They're owners of complex computing equipment meant for mining Bitcoin and other cryptocurrencies on the blockchain.

Miners are responsible for creating new blocks on the chain and attempt to be the first to verify cryptocurrency transactions to collect rewards.

These people compete to solve “hashes” that enable them to process the transactions and get the rewards of solving the complex mathematical equations on the blockchain.

Understanding what nodes are is another crucial concept of blockchain. Nodes are computers connected to a cryptocurrency network that execute functions like sending, creating, or receiving information.

Since every transaction on the blockchain is recorded and distributed, it’s essential to know that nodes are the devices that facilitate communication within the network and transfer information about new blocks. Nodes also help to maintain the integrity and security of the network.

Why is The Blockchain Important?

Blockchain technology is fundamental in today's world because of the security and transparency that it provides users. The information on the blockchain can be accessed immediately on a shared ledger that network members can only access.

Let's look at a common banking scenario: you transfer money to your family from your bank account by logging into the banking portal and transferring the funds using their account number.

Once the transaction is complete, the bank updates its records for you to see that the money went through. However, there are some potential issues with this process.

Someone can easily alter and tamper with this type of transaction, which is why the market demanded blockchain solutions to fix the manipulation problem. In addition to security, blockchain avoids this long process and allows for faster movement of transactions, saving users time and money.

Blockchain is essential for several other reasons, including:

Since blockchain doesn't store its data in a central location, the information is copied once and then spread across a vast network of computers, making it very difficult to alter. A decentralized public blockchain ensures your data is protected on a secure database.

Blockchain users don't need to rely on any other institution or government to complete the transactions. The decentralized nature of blockchain allows users to conduct transactions quickly and securely in ways that a centralized system cannot.

The openness of data on the blockchain also doesn't exist within the financial system.

But how is blockchain data made transparent?

It's through network participants accessing holdings and transactions of public addresses that are used to search through blocks of the blockchain and their details. The data is on a decentralized network, meaning anyone on the public blockchain can view it.

No one can change or alter any blockchain transactions after they are distributed to the shared ledger. A new transaction must replace previous transactions that contain errors, and both transactions will be visible.

All users in the network can access the ledger and the records it contains. The shared ledger only records transactions once, which eliminates the unnecessary effort that traditional networks require.

Smart contracts are sets of rules stored on the blockchain and executed automatically. They work by allowing all participants to be immediately sure about the transaction's outcome without any third-party involvement.

Smart contracts are stored on the blockchain and executed automatically, improving efficiency for everyone on the blockchain. Network members share the distributed ledger, which helps eliminate time-wasting activities like record reconciliation. Blockchain is also operating 24/7, so you'll see your transactions completed usually in 10 minutes or less.

What Type of Transactions Happen on The Blockchain?

Blockchain transactions function in several different ways, but the most significant transaction is with cryptocurrency.

While the original blockchain functions without a centralized authority, transactions still need to be authenticated by the nodes in the network before they become part of the blockchain.

Authentication uses data strings (known as cryptographic keys) to identify users and grant access to their wallets on the system.

Each user has a private and public key that all users in the network can see. Using these together creates a digital identity that authenticates users and unlocks the transaction they are trying to perform.

The people that own the nodes verify transactions to receive rewards in a process called "proof of work."

Proof of work (PoW) is a way to add new blocks of transactions onto a cryptocurrency's blockchain. To understand proof of work, here's a quick example:

As Bitcoin transactions are made, they pass through verification and are grouped into blocks that can be mined. The PoW algorithm generates a hash for the block, and miners race to be the first ones to add the new block of transactions to the blockchain.

The winning miners are the ones that get to add the block of transactions onto Bitcoin's blockchain and receive rewards of newly minted Bitcoin as well as transaction fees for their work.

The proof of work algorithm of Bitcoin adds a new block about every 10 minutes and adjusts the difficulty for miners depending on how quickly they add blocks. As mining happens faster, the mathematical problems become harder to solve and vice versa when mining is slower. 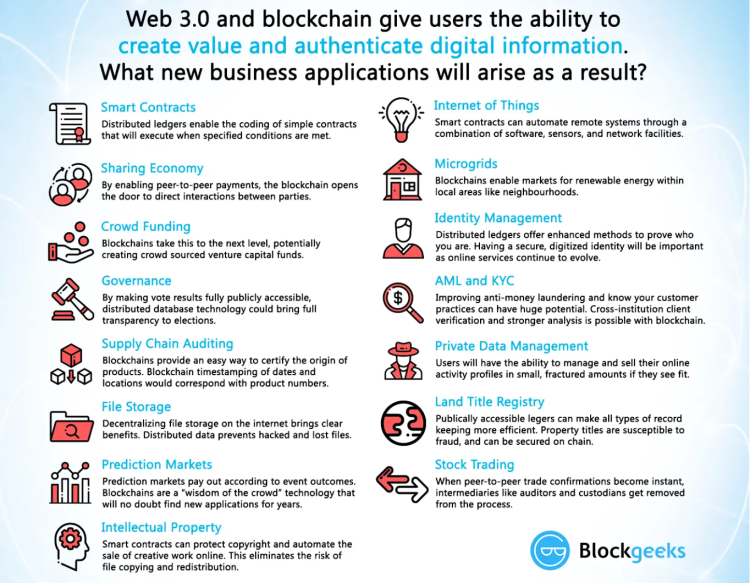 What Are The Pros of The Blockchain?

Now that you understand blockchain and its workings, it's time to talk about why there's so much hype around it.

Along with having enhanced transparency, blockchain also creates a trail that documents the path of an asset every step of the way. Blockchain provides proof of the legitimacy of transactions in industries prone to fraud and malicious activity by sharing data directly with members on the blockchain.

Blockchain solves the problem of extensive paperwork and processes prone to human error. It also automates these processes and provides a single place to store digital transactions.

The decentralized ledger where information is stored in the blockchain also ensures trust for cryptocurrency transactions, and the process for authentication enhances reliability in the network.

Blockchain eliminates third-party centralized services and intermediaries that charge transaction and processing fees, reducing the costs for organizations of all sizes. You'll also save on the cost of documentation since everyone can view the immutable version on the network.

Other pros of using blockchain include:

What Are The Challenges of The Blockchain?

With all the benefits of using blockchain, there are some drawbacks that you should be aware of before using this emerging technology for transactions.

While the data on a public blockchain is anonymous, it's still in the hands of all nodes in the network. This means that everyone in the network has access to the data and creates the possibility of tracking the identity of users through transactional data.

While the blockchain market application for Bitcoin is popular due to its robust nature, it can only handle about seven transactions each second. In contrast, other blockchains can handle 10,000 transactions or more. In addition, each node's authentication process can take a long time to accomplish and may be hard to scale.

The regulatory nature of the financial industry has yet to catch up with much of the cryptocurrency world and poses a significant threat to the blockchain. In fraud cases, blockchain applications must pinpoint the source, which can be a challenge for a decentralized network.

Storage issues become a concern for the blockchain because databases are stored on all nodes throughout the network. As the number of transactions increases, the database will expand and eventually reach its maximum storage capacity. One example is the Ethereum blockchain which is increasing to 55 GB per year.

Miners use a lot of energy to solve the complex mathematical problems on the blockchain, which isn't ideal for its real-world applications. While permissioned networks are efficient, the problem lies with public networks that consume a lot of energy to remain operational.

Lastly, blockchain technology is still in its infancy, and we have no idea where it will take us in the future. Since it's not mainstream, people have their doubts about adopting the technology and don't have much confidence in it. This leads to stagnation in the complete utilization of blockchain technology. 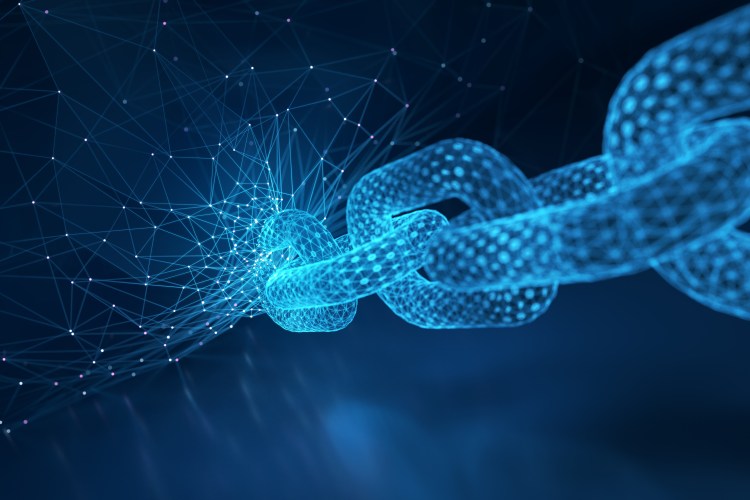 Blockchain will be the future of how humans transact on many different fronts. Its application in the supply chain, transportation industry, and many other sectors shows that this promising technology is helpful for more than just cryptocurrency transactions.

At this point, blockchain is misunderstood and underutilized by the general public. It's up to us as users to spread knowledge about blockchain's capabilities and why people worldwide should widely adopt it.