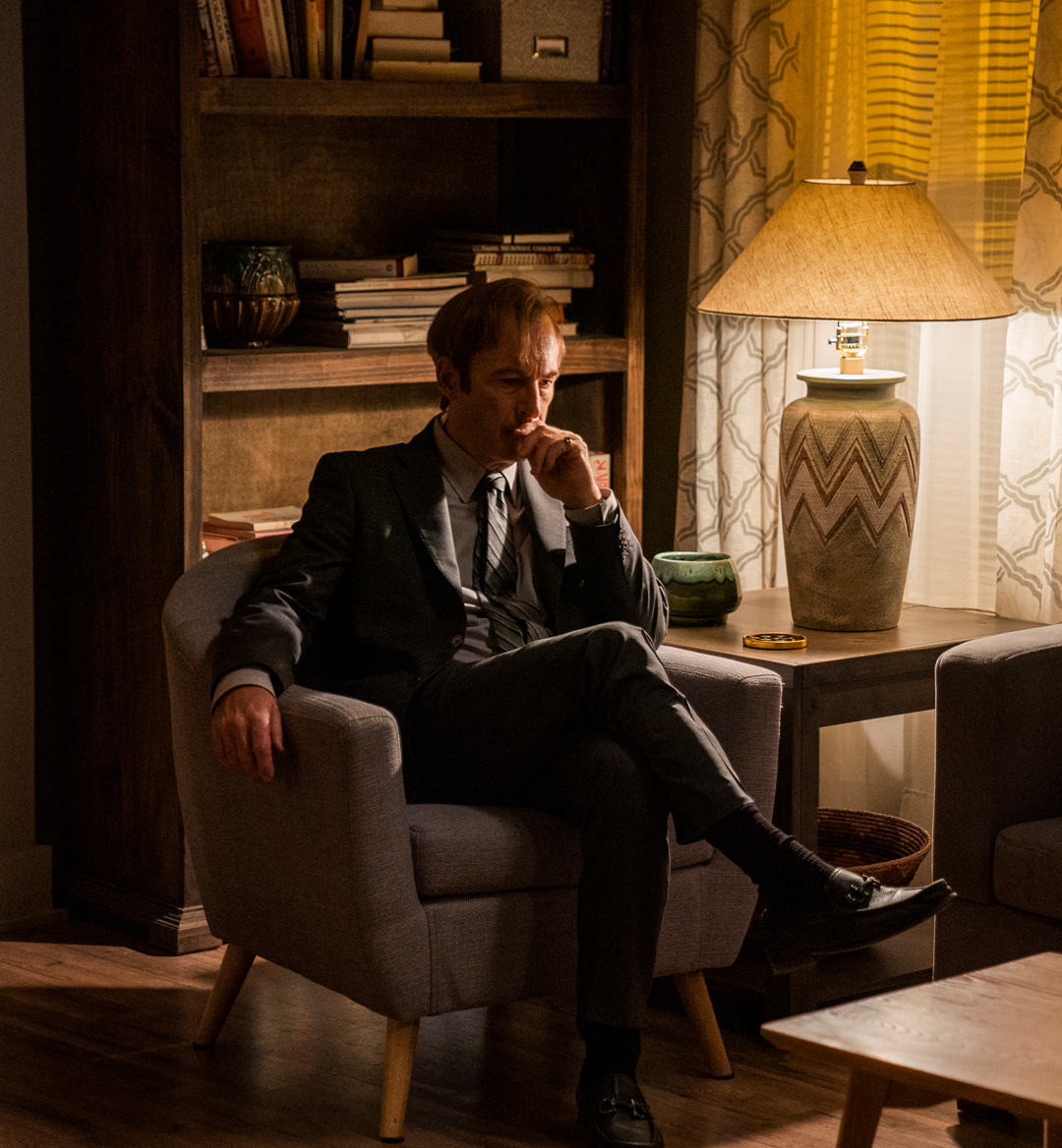 Despite the title of this week's episode of Better Call Saul, we are no longer having fun and aren't playing games. While no one may have been killed this week, at least in the physical sense, it was a gut-wrenching climax to an episode and one that will stick with the audience for a long time.

As we creep ever closer to the events of Breaking Bad, we're still with Jimmy McGill, someone who still seems to feel genuine remorse, unlike the future Saul Goodman. However, the events of "Fun and Games" are set to change that in a big way. 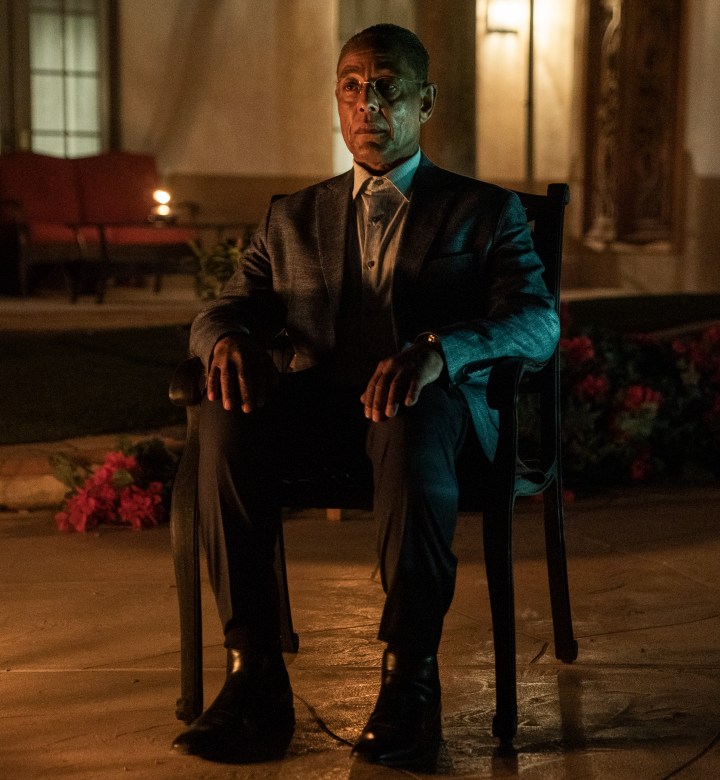 This week begins as many classic Better Call Saul and Breaking Bad episodes have: With a good old montage.

Set to the song "Perfect Day," we see the sign of "Saul Goodman & Associates" being raised above Jimmy's office in the strip mall, Kim is back in court helping her clients through their cases, and Mike continues his clean-up of the mess back at the apartment. As their days' end, Jimmy and Kim arrive back home and see everything back as it was, no destruction, no blood, and no reminder of the horror that ensued there. Finally, Mike burns all of the evidence from the incident, and Jimmy and Kim, unable to remain there, head to a hotel.

In an attempt to assuage both his and Kim's guilt, he tries to tell her that one day they'll both be able to go about their day without remembering it at all, a statement both know isn't true.

We then pick back up with Gus, who has gone to Mexico to have his meeting with the Cartel bosses. Next to the pool of Don Eladio, Gus meets with him, Don Bolsa, Hector Salamanca, and the Twins. They are there to finally settle the conflict between the Salamancas and Gus, with Hector accusing Gus of conspiring against the Cartel. As viewers, we know this is true, but the rest of the Cartel present are unaware.

Hector wants Gus killed, but Eladio believes the lie that Gus had set up to protect himself. A burned body that the Twins found had Lalo's teeth in it, and the documents that had been set up to show that Nacho was in the pay of the Peruvians convince Eladio that Gus had nothing to do with Lalo's death. Eladio sets the terms: Gus maintains control of everything North of the Southern Valley, with the Salamancas taking the rest.

Gus returns home and, for the first time in a long time, opens the shutters to his home, knowing he is safe from harm. He meets with Mike, who asks about Jimmy and Kim to make sure everything is okay with them. Mike lets him know that the issue is finished for all intents and purposes. Gus tells Mike to begin work on finding a new crew to finish the superlab and to begin today.

We then see a side of Gus that we've never seen before; he visits a wine bar where he orders a glass and relaxes. He's approached by a waiter named David, whom he is familiar with. David tells him a story about a particularly great bottle of wine that clearly captures Gus' full attention.

It might be the first time we've ever seen Gus truly let his guard down in two different television series. As Gus is enthralled with not just the story but David himself, David leaves to grab another bottle of wine. Gus finishes his glass and suddenly switches back into the Gus we know. He gets up, leaves some cash for his drinks, and exits the bar.

Picking Up the Pieces 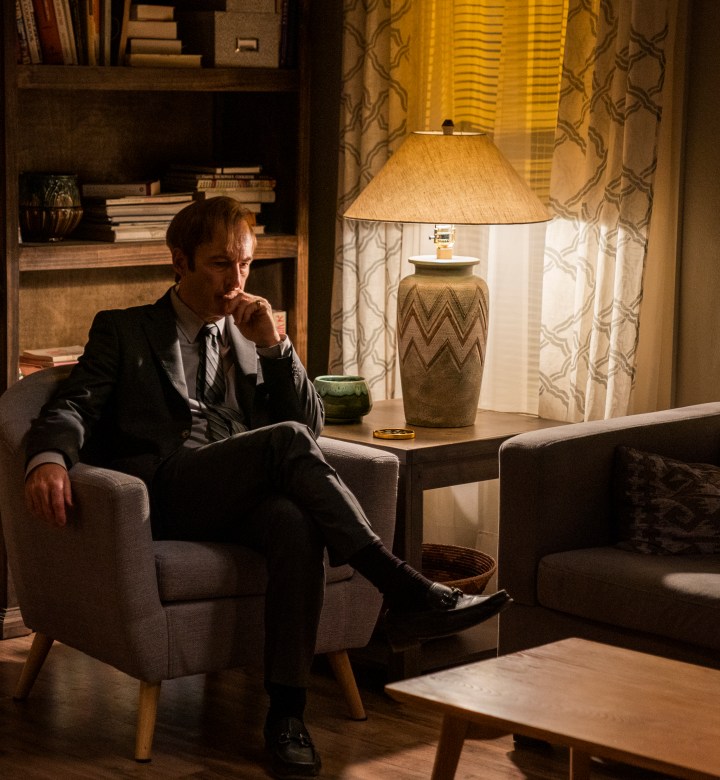 Mike is back at his own house, where he takes out a case that contains his pistol, bullets, and the driver's license of Nacho's father. Wracked with some regret over Nacho's death, Mike calls his father at his shop and asks to speak with him.

Outside of the shop, they have a conversation where Mike tells him about what has happened. He lets Nacho's father know that his body won't be found and that his death was fast, and he felt no pain. Similar to the future path of Jesse Pinkman, Nacho made his fair share of mistakes and fell in with some bad people but he was never like them and he had a good heart.

Mike tells him that he won't have to worry about the Salamancas and that there will be justice. He doesn't have time for Mike, saying that what he means isn't justice, it is revenge.

"You gangsters and your justice...you're all the same," he says, which clearly has an effect on Mike. It's unlikely that Mike ever truly thought of himself as a gangster, more gangster-adjacent. However, that was a lie he told himself to rationalize his actions.

Meanwhile, Kim and Jimmy head to the memorial service for Howard at the offices of Hamlin, Hamlin, and McGill. As they talk with Rich Schweikart about Howard and how none of them "saw it coming," they learn that HHM is leaving the building, downsizing, and changing its name. As Howard died, so did the law firm he left behind.

Kim and Jimmy then head to talk with Howard's widow, Cheryl, and Cliff Main. She questions the two of them about how they were the last people to see him alive, and how he had told her they were harassing him. Jimmy offers a half-baked explanation/lie about his and Howard's relationship.

Following Mike's orders, the two of them tell Cheryl that Howard had shown up at their home, all disheveled and speaking nonsense. She clearly doesn't believe that Howard was on drugs, but Kim, deep in the lie at this point, tells her that she saw Howard in his office late at night, snorting something off his desk.

Cliff, who had seen Howard in a manic state multiple times as a result of Jimmy and Kim's sabotage, tries to get Cheryl to have the conversation somewhere else. However, Kim tells her that she was his wife and would have known better than anyone, feigning sympathy for her. 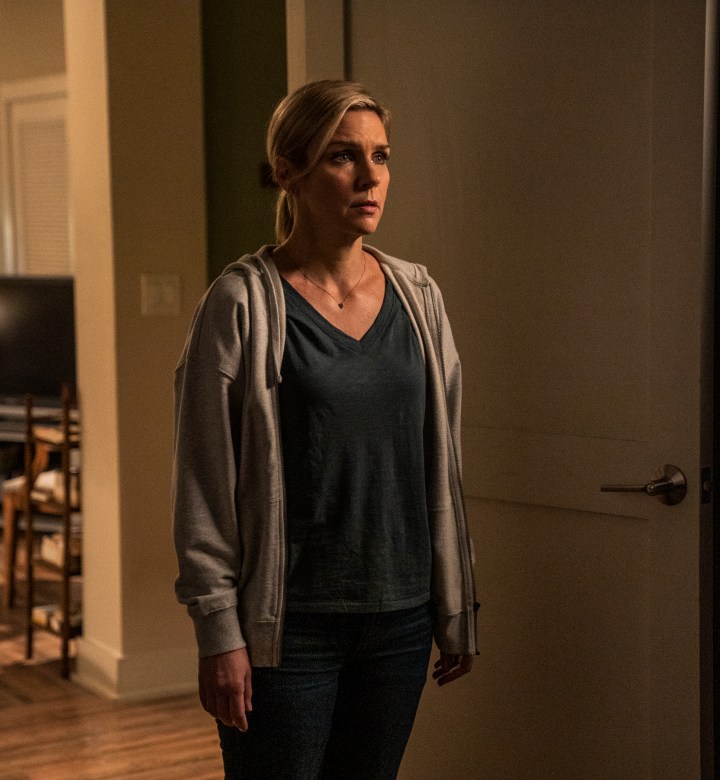 Jimmy and Kim leave the service, with him telling her that they can finally move on. she kisses him, then silently gets in her car and drives off.

In court, Kim is representing one of her clients in a case when she files a last-minute motion. She is requesting to withdraw from this case for personal reasons. Kim and the prosecutor go to the bench as the judge would like to know why she's withdrawing.

As the judge continues to probe, Kim informs the judge that she can't continue because she's no longer an attorney. She filed to the Bar Association that she's leaving the law practice. We then see her smoking a cigarette on the apartment's balcony as Jimmy comes flying into the parking lot.

"YOU DID WHAT?!" Jimmy yells as he runs through the door. He wants to know what happened and why, and he asks about her clients and what she wants to do. In classic Jimmy fashion, he attempts to fix everything and says they can get her job back as a lawyer.

He says they're in this together, and as he goes into their bedroom, he sees that she's in the middle of packing up all her stuff. She's going to leave.

In one of the most heartbreaking scenes of the series, Kim defines their relationship: "You asked if you were bad for me? We're bad for each other." They love each other, but "together, we're poison." Jimmy pleads and begs her, asking what he needs to do to fix this. They make each other happy, "how could that be bad?"

He explains that it was all on Lalo, who walked through the door and killed Howard. She reveals that she's known Lalo was alive for over a month, and she says she didn't tell him to keep him safe. However, the truth is that she knew what he'd do; he'd blame himself and try to do what he needed to in order to protect her.

She was afraid he'd pull the plug on the scam, and they'd break up. Kim didn't want that because she was, as she tearfully explains, having too much fun. The last sound we hear inside their apartment is Kim boxing up more of her stuff.

The show finally makes its full jump forward, and we open on Saul Goodman in bed with a prostitute. He wakes her up and begins his day. He takes phone calls in the shower, gets dressed in his loud and obnoxiously colored suit, and then heads downstairs for breakfast.

He drives to the office, still on the phone, when suddenly he hears one of his ads on the radio. Saul complains about how he sounds, demanding that they not pay for it and to call the station manager about it.

"Screw the FCC. I'll go the mat with those pencil pushers!" He heads into his office, which is as crowded as ever, playing patriotic music, just as it will when a certain Walter White walks through the door.

As Saul settles in with some coffee, he messages Francesca, "Alright, let justice be done until the Heavens fall." 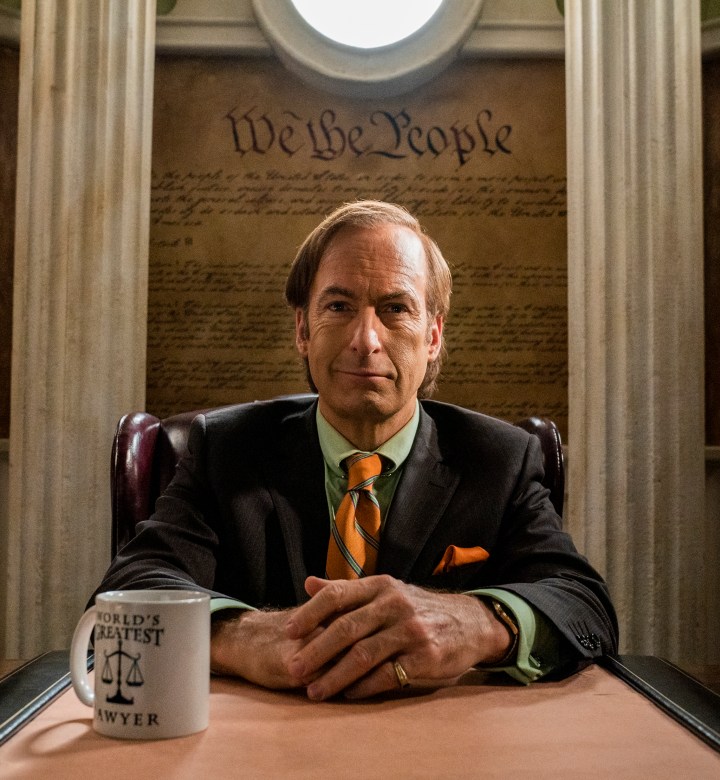 It might not have exactly come as we thought it would, but Jimmy McGill—much like Howard, Chuck, and so many others—is no more. We have now arrived in the Breaking Bad portion of the timeline, with Saul Goodman completely enveloping who this man is.

Kim leaving Jimmy, Howard being killed in front of him, and many other factors ultimately contributed to what caused this to happen. The show making it a jarring time jump rather than a gradual one was smart. With only so many episodes left, we can infer what happens after Kim leaves and the direction his life takes, and it's better not to waste time on unnecessary exposition.

Without a person even being killed, this proves to be one of Better Call Saul's most heartbreaking episodes to date. Kim and Jimmy breaking up feels like one of our relationships ending because we had been rooting for them for so long. Even though we knew something like this would happen because Kim isn't in Breaking Bad, it doesn't make it hurt any less. Their breakup scene may actually be the first time we've them say "I love you" to one another, and even though she's not leaving him out of malice, she knows that they need to be apart.

Only four episodes left of Better Call Saul, and it's only getting more tragic every week.