“When writing the story of your life, don’t let anyone else hold the pen” 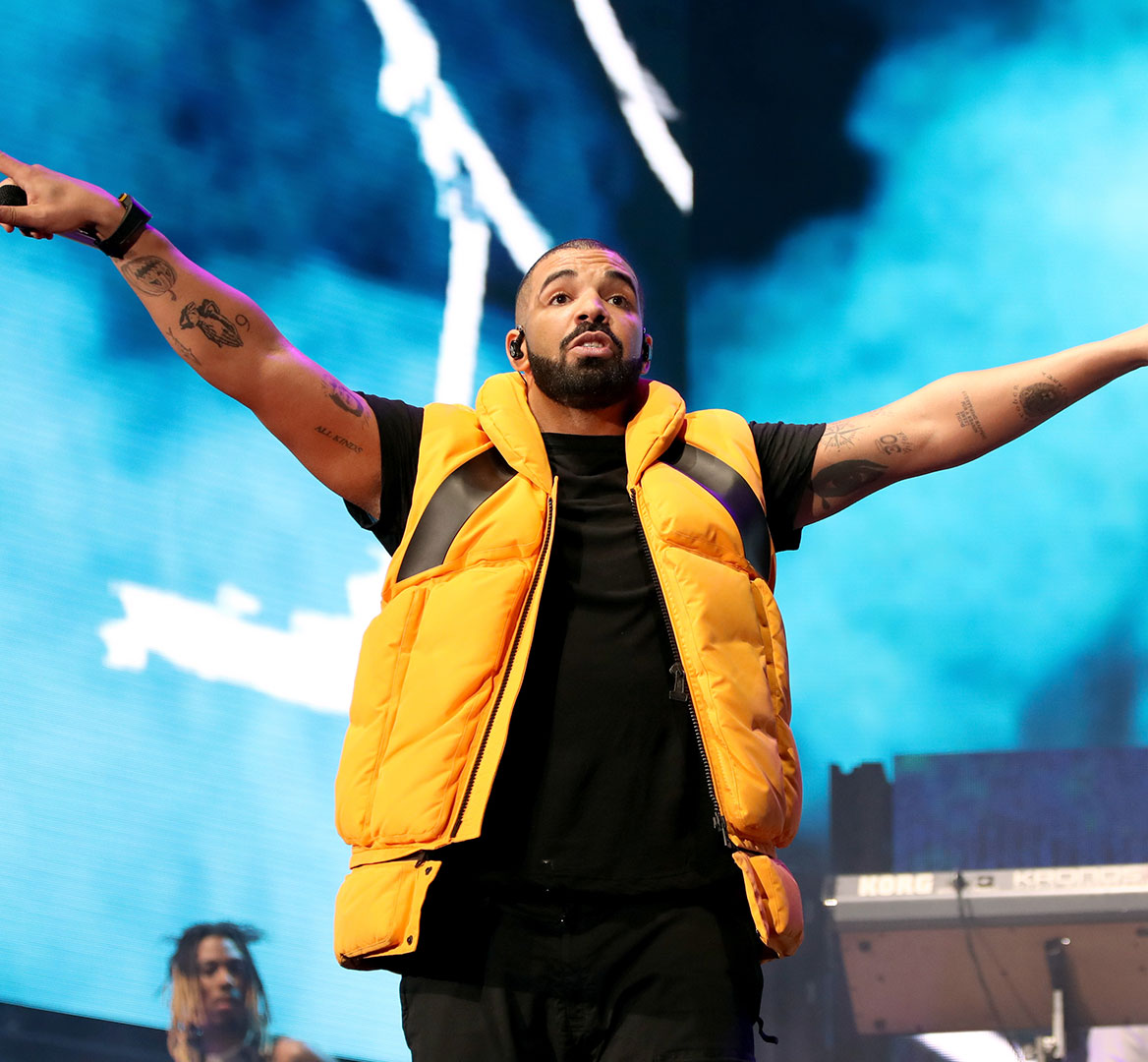 Whether you love him or hate him, it would be difficult for anyone to deny that Aubrey Drake Graham is a force. He’s broken records previously held by The Beatles. He owns a Boeing 767 jet. He popularized the phrase “YOLO,” and he made Toronto a place that people now visit. According to DJ Akademiks, Drake has spent 509 out of 520 weeks in a decade having a song in the Top 10.

Drake’s life story might be better than the stories they’re telling about him, but behind all of his success has been years of grinding, relentless energy and faith, an obsessive work ethic, a crew of dedicated and loyal friends and quite a few side hustles. While Drake might be instantly recognizable for relatable lyrics and countless hits, a majority of his wealth comes from other revenue streams.

You may know him as a 'Cris bottle sender and a check picker-upper, but Aubrey has done quite a few other jobs since he came on the scene. 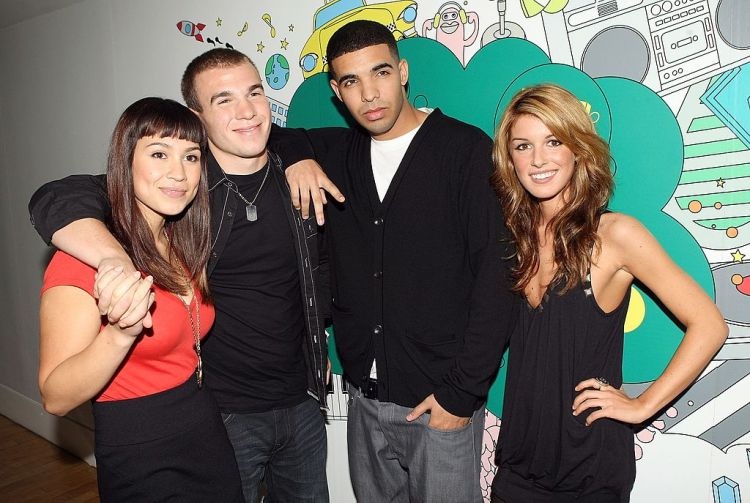 “It was the first time I ever got to showcase rap on television. I think they gave me the opportunity after that to write a real song myself.”

Before Drake was runnin’ through the 6 with his woes (yes! I brought back this lyric! Remember when everyone was saying this? Whaddup, 2015?!), Aubrey Graham was on the Canadian teen soap Degrassi: The Next Generation. Playing popular athlete Jimmy Brooks, his basketball career gets cut short when he gets shot by an unhinged classmate.

If you’re wondering how Drake transitioned into rap, look no further than season 7, episode 4: “It’s Tricky.”

“Thank you, Thank you. This note will be consisting of things that I personally co-sign and or find of interest. Please enjoy and feel free to comment."—Peace, O.

Before becoming OVO’s unofficial brand curator, Oliver El-Khatib was working at a Toronto clothing store called Lounge and living with Noah “40” Shebib, Drake’s future engineer. In need of a platform to release new music and post pre-Pinterest mood boards, they set up October’s Very Own, a blog whose namesake would later lend itself to a record label, an Apple Beats station and those cool ass owl hoodies.

“I avoided the Coke game and went with Sprite instead.”

When Sprite needed a face to represent their first global brand campaign, Spark Music Project, they had many options, but none more perfect than Drake. The commercial, which aired during the 2010 NBA All-Star Game, depicts the frustrated rapper struggling with writer’s block in the studio with frequent collaborators Matthew “Boi-1da” Samuels and Noah “40” Shebib. We see Drake drink a Sprite and turn into an animatronic version of himself; finally focused, he spits out the lyrics that launched a million Instagram captions: “Last name Ever, first name Greatest.”

Putting together a music festival is hard (see Hulu’s documentary, Fyre Fraud.) Putting together a successful music festival is even harder (see Netflix’s documentary, Fyre: The Greatest Party That Never Happened.) OVO Fest, Drake’s annual love letter to the city that raised him, however, is sold out year after year.  Whether it’s the consistently impressive roster of headliners—he’s had Meek Mill, Cardi B, Chris Brown, Offset, Rick Ross, Eminem, Jay-Z, Lil Wayne, among many others— or just being in the presence of the 6 God himself, OVO Fest has joined the ranks of can’t-miss concerts.

“With our brand, it really is something we started just for us. The owl being bootleg to the point where I see people walking around with owl sweatshirts—it blows my mind. And me and Oliver talk about it all the time like, ‘Man, what should we do? Should we just make these sweaters and sell them?’”

The first iteration of the partnership of OVO and popular jacket brand Canada Goose was released Nov. 13, 2010—300 all-black-everything “Chilliwack” bombers. Earlier this month, they dropped a new two-piece collection in black and “sunset orange,” the ninth time OVO and CG have collaborated. In true Drake fashion of keepin’ it in the family, OVO member Niko and baby mama Coco are featured as brand models.

The overall clothing brand has proven wildly successful, with Business of Fashion reporting the retail company has garnered $4.3 million in sales. Drake has managed to do something many of his peers have failed at when entering retail: conveying a sense of authenticity. Every design looks like something Drake and his crew would rock, and they do. Marrying streetwear, luxury and reasonable-ish prices (hats are $48, T-shirts are $58, hoodies $158), Drake has managed to not only create a clothing line that’s coveted and cool, but last year he also opened up a store in Tokyo, his ninth brick-and-mortar location.

2012 // Drake uses the OVO collective to start up OVO Sound 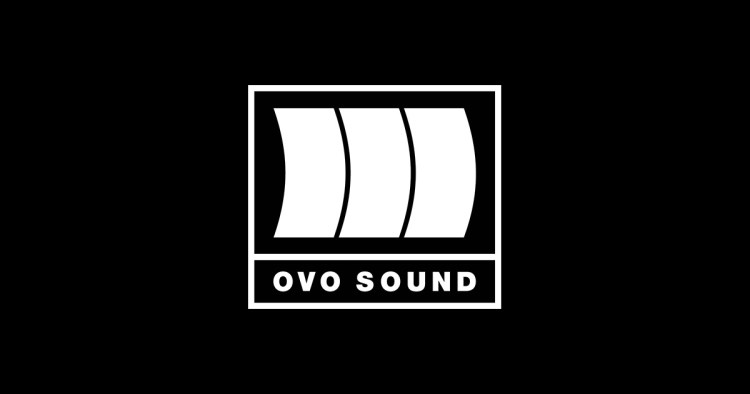 What does PARTYNEXTDOOR, Majid Jordan, dvsn, Roy Woods, OB O’Brien and Baka Not Nice all have in common? Besides being, I can only assume, delightfully polite, all of these artists are represented by the OVO Sound record label. Launched as a platform to drop his own music as well as spotlight other rising talents, the Drake/40/Oliver triad founded this record label in 2011 and became a subsidiary of Warner Music Group’s Warner Records a year later.

"I get to be this over-the-top mammoth in Ice Age, and a lot of capturing these characters is going as far as you can because you have to realize that [the viewers are] not going to see your face. They're not going to see you look awkward and screaming.”

September 2013 // Drake becomes the global ambassador for his hometown team, the Toronto Raptors 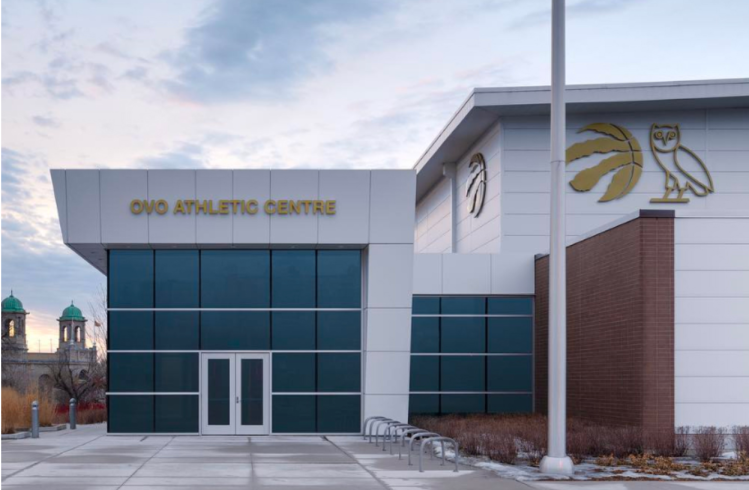 "Today's probably one of the best days of my life. I got to throw on the suit and be announced as the global ambassador of the Toronto Raptors.”

Whether it’s cheering on the Miami Heat, Houston Astros or literally any soccer team that exists* (do we have time to get into all the college sports? No?), Drake has faced criticism for supporting too many teams from too many places.  Through it all, his most ardent fandom has been placed behind the Toronto Raptors. Apparently, they’re fans right back. In 2013, Drake became the global ambassador for the franchise, essential in their rebranding efforts.

Earlier this year, the Raptors’ practice facility was renamed the OVO Athletic Center because of course, it was.

*See him rocking jerseys of Manchester United, Chelsea, Barcelona, and teams from Italy, Australia, and Mexico 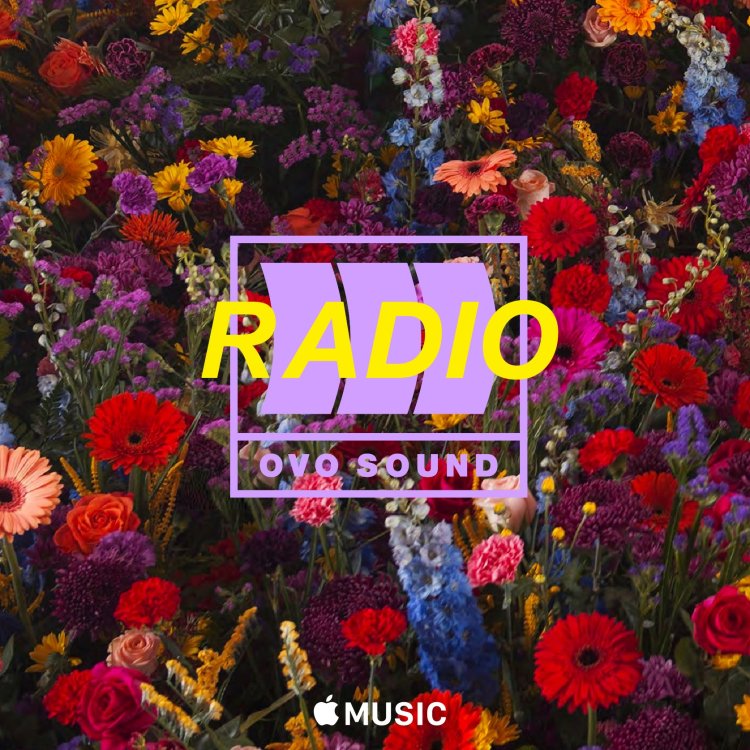 “I got me a deal with Apple and I still feel entitled.”

First premiering in July 2015 on Apple Music’s Beats 1 radio station, OVO Sound Radio featured a medley of music from OVO artists and affiliates. A biweekly show hosted by co-host Oliver with frequent enough appearances by Drake, OVO Sound has been used to introduce rising artists as well as release new music. Drake has been the face of Apple ever since he signed a $19 million deal with the music platform. 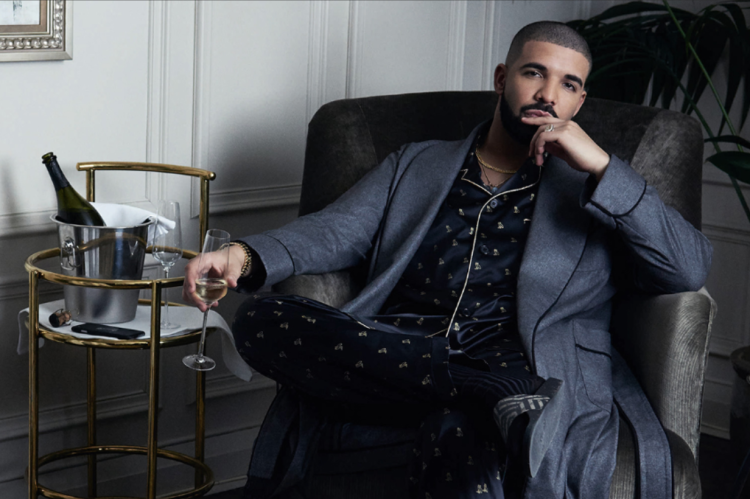 How many times have you asked yourself, “Isn’t it about time that someone launched a whiskey that everyone could enjoy?” Countless times? In 2016, Drake teamed up with ex-banker Brent Hocking to launch Virginia Black, a whiskey brand with what the kids call an Instagrammable bottle. Drake took guerilla marketing to new heights to make sure the beverage was a success. He brought it on The Tonight Show with Jimmy Fallon to drink on-air and on stage at the Billboard Music Awards to take 13 shots for his 13 wins. VIP Virginia Black lounges and branded merch were also available for the Summer Sixteen tour because Drake is nothing if not thorough. This is probably what he was referencing when he said he was tired of being subtle. 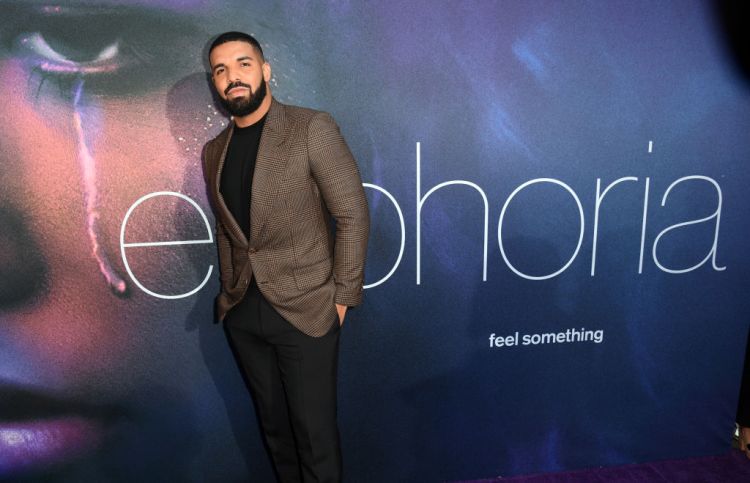 “Side effects include #EUPHORIA. coming soon @Zendaya @A24 @HBO”

Tired of this guy making so many right moves? Your favorite could never (did I do that right?).

Earlier this year, Drake signed on as an executive producer to HBO’s Euphoria. Starring Zendaya and some truly fabulous eye makeup, this show has been renewed for season 2. 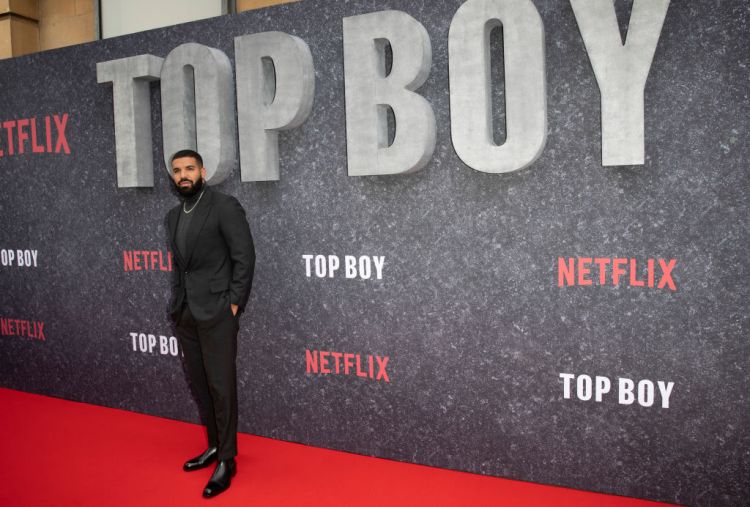 “I became really attached to the characters. There's a lot of parallels between Toronto and London. It reminded me of people I grew up with and guys that I know. I really just felt super connected right away, but then it disappeared on me. I did my research and found out it had been ultimately canceled."

Drake has done a lot of dope things, but the biggest baller move he’s managed to pull off is bringing back a canceled TV show just because he liked it.

After the British crime show Top Boy was canceled in 2013, Drake’s dedication to getting this show back on the air got him in front of Netflix, where he made a pitch for its revival. In November 2017, it was announced that Netflix had picked it up. Drake, along with his partner Adel “Future” Nur, would go on to executive produce, and the new season would air September 2019. The soundtrack, presented by none other than OVO Sound, is also available now.