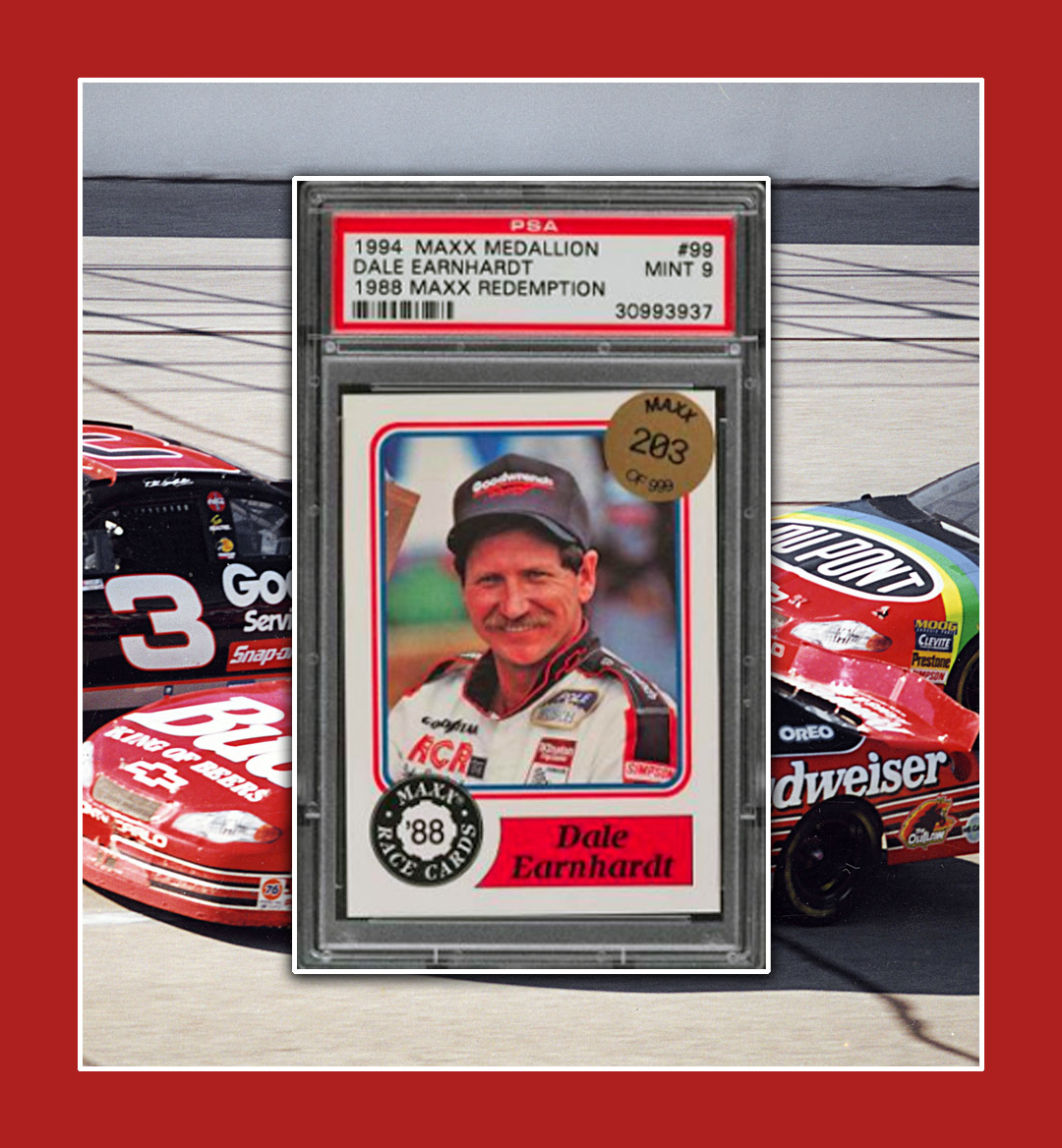 Before discussing the most valuable NASCAR cards, I want to talk about the sport itself. NASCAR, much like the NFL, MLB, and NBA, has become ingrained in American pop culture. It can be seen in the film industry, brand marketing, and even fashion. Since 1949, racers have been battling it out on tracks across the country, all while filling Colosseum-esque stadiums. Premier events like The Daytona 500 have since become the most-watched race on tour, garnering millions of viewers every year.

Like other major sports, NASCAR has no shortage of legendary drivers. Names like Dale Earnhardt, Jeff Gordon, and Richard Petty are synonymous with winning, and they can be found etched at the bottom of just about every trophy.  Additionally, current drivers like Daniel Suarez, Bubba Wallace, and Hailie Deegan have brought new excitement and energy to Sunday’s races.

Today, I'll dive into the biggest sales from NASCAR trading cards. While not as expensive as recent F1 racing cards, NASCAR still has a prolific history of cardboard.  These range from the 1983 UNO set, to the 1988 Maxx Racing set, and all the way to recent products from Panini like Prizm and National Treasures.

I'm ready to jump right in. Start your engines and buckle up - here are the 10 most valuable NASCAR cards of all time. 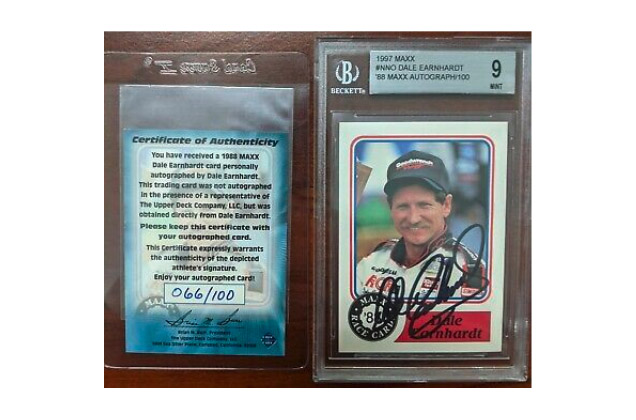 Kicking off this list of most valuable NASCAR cards is a card of Dale Earnhardt Sr., who is heavily regarded as one of the greatest to ever get behind the wheel.  “The Intimidator” made his debut in 1975 and quickly became one of the most imposing drivers on tour. His illustrious career earned him 76 Winston Cup victories, including a first-place finish at the 1998 Daytona 500.

This extremely rare buyback set was resulted from Upper Deck acquiring Maxx Racing.  They released a redemption for the 1997 Maxx product, and it also came with a hand-numbered certificate of authenticity.  This card is the holy grail for “The Man in Black,” and it’s just not one you see pop up every day. 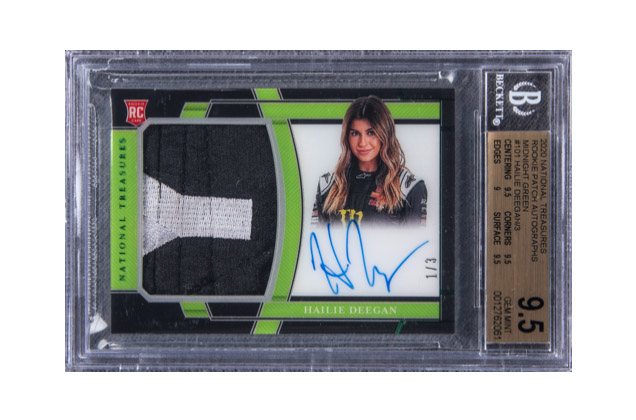 The second feature on my list of most valuable NASCAR cards is very symbolic of the resurgence in modern trading cards. It features a young athlete appearing on one of the most sought-after sets in all of sports, Panini National Treasures.  Oh, and it also received the coveted BGS 9.5 grade, which is a rare occurrence for thicker cards.  When combining a low serial number (/3), a sick patch, and an autograph, it’s no wonder this card reached an auction price of $3,380 in 2021.

Hailie Deegan has accumulated a huge following since turning pro in 2018. At only age 20, she has competed in both premier race car and truck events, becoming one of NASCAR’s most promising young stars. She has also been featured in flagship Panini products for 4 years now, so this may not be the last time I highlight her on this list. 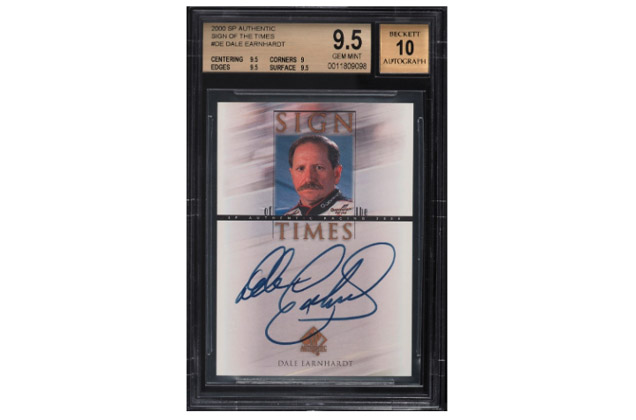 Earnhardt tragically passed away after a 3-car collision during the 2001 Daytona 500.  As a result, many of his autographed cards and memorabilia maintain quite the premium on online marketplaces.  None are quite as visually-striking as this auto from 2000 SP Authentic.  This card features a bold and blue John Hancock of #3’s famous signature and received a 10 autograph grade from Beckett, which is extremely difficult on older pieces.

There are only 3 copies of this stunner even registered in PSA’s database, so coming across this is no easy task.  Needless to say, this is undoubtedly one of the best cards for a racing legend, so it’s no shocker that it reached its sale price of $2,640 in June 2022. 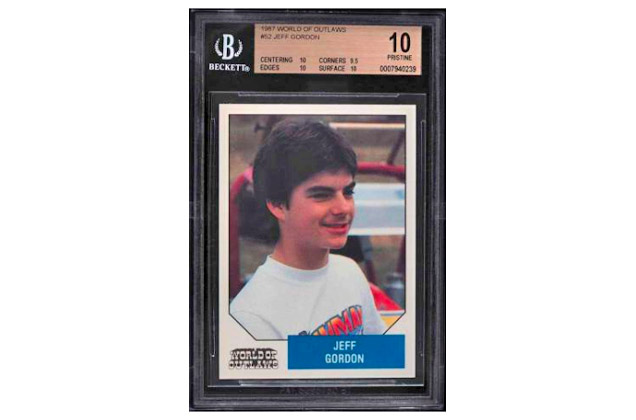 Definitely one of the more unique cards on this list is this Beckett 10 rookie of NASCAR Hall of Famer, Jeff Gordon.  World of Outlaws, a 50-card set from James International Art, would probably have been lost in the junk wax era if it wasn’t for this picture of a skinny, 16-year-old Gordon. The rarity and obscurity of this gem can also explain why it sold for $2,300 in 2021.

With a career spanning 4 decades, Jeff Gordon’s resume speaks for itself.  He’s a 3x Daytona 500 winner, and has battled with the greats of each generation.  Gordon now serves as Vice Chairman for Hendrick Motorsports after retiring in 2016.  Cards like this still remind us of the many races where NASCAR’s Iron Man came out on top. 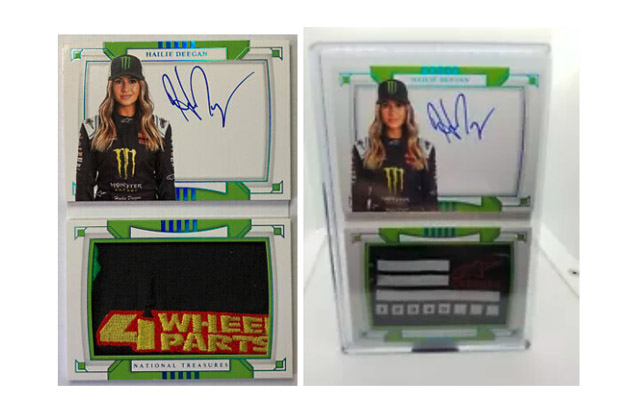 While the existence of multiple 1/1 may have slightly hurt the value, these cards are still impeccably-made.  It's impossible go wrong with a massive patch and an on-card autograph, especially when it’s one of the most collectible names in the sport today. 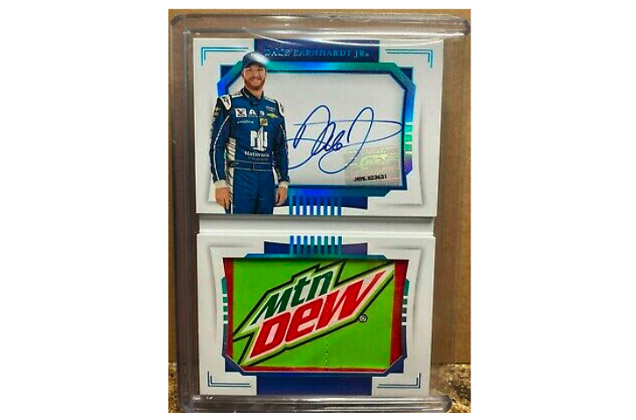 Have you ever seen a cooler card in your life? This booklet of Dale Jr. may be the NASCAR equivalent to an NBA logoman.  Newer products like NT are able to creatively show the branding of NASCAR, as these enormous booklets provide ample space for logos of its iconic sponsors.

Legendary in his own right, Jr. had some immense shoes to fill after joining the Winston Cup in 1998.  Trophies and awards have piled up in a 20-year career, putting Earnhardt into the conversation of greatest drivers ever.  #88 was recently inducted into the NASCAR Hall of Fame;  he currently remains semi-retired from the sport. 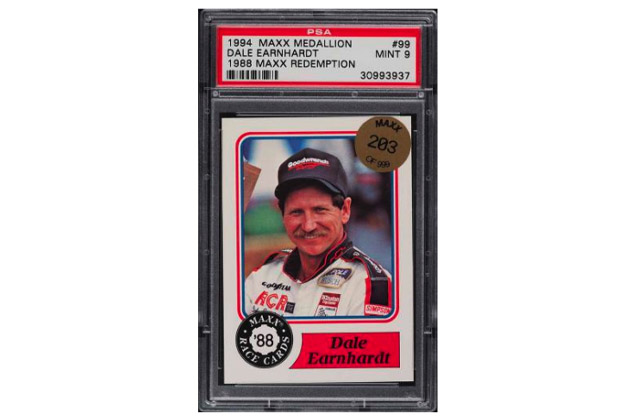 In our third and final appearance from Dale Sr. on this list, we highlight the early usage of a redemption system, which is now commonplace in the trading card world.  It also showcases serial numbering, an addition to cards that would have been helpful during the mass-produced junk wax era. This card is so rare, in fact, that it is only one of 23 graded PSA 9s, with only 18 higher-graded copies in existence.

Currently, there's a PSA 10 copy up for grabs on eBay, and one recently sold for only $1,860 in a June PWCC auction 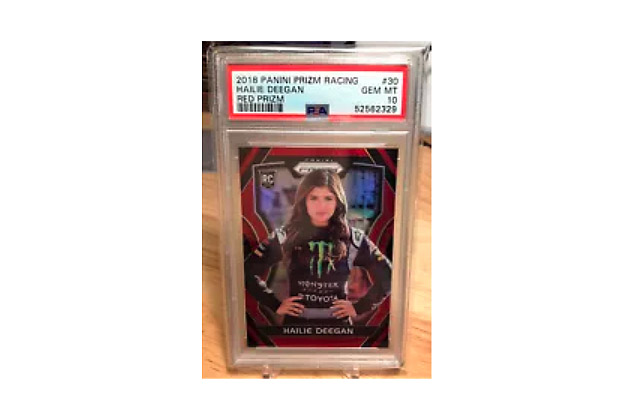 This is the first appearance from the hobby’s most popular set, Panini Prizm. There are currently no known gold or black finite sales for Hailie Deegan, so this low pop red parallel remains the most expensive NASCAR Prizm sale of all time.

Numbered NASCAR parallels rarely pop up, so it’s no wonder why this reached a sale price of $1,970 in 2021. Fortunately for collectors, these boxes can still be picked up at an affordable price, especially at a time when Prizm boxes in other sports are skyrocketing. 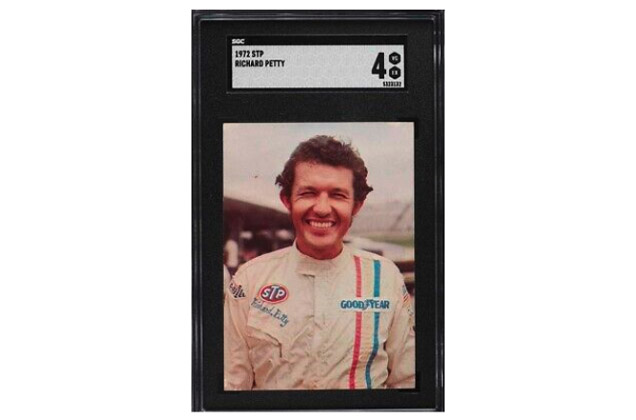 Our last spot on the list is the first appearance from one of the GOATs of racing, Richard Petty.  “The King” recorded 200 NASCAR wins in his career, 95 more than any other driver in history.  Petty's stats are almost mythical, mirroring those of other legends like Wilt Chamberlain and Hank Aaron.  So, it’s only fitting that his rookie card is nearly impossible to find.

1972 STP is a small 11-card set that you will rarely find at shows and conventions.  There are currently only 21 copies of this Richard Petty rookie in the PSA registry, including one PSA 9.  This SGC 4-graded Petty recently sold for $1,500, and we will have to see if any higher grades surface in the future.

Which of the most valuable NASCAR cards is your favorite? Are there any alternative sports would you like to see us cover in the future? Let us know @CardTalkPod on Instagram and Twitter!

Winter Has Come and Gone, Here are 25 Shows Like 'Game of Thrones' to Watch Right Now