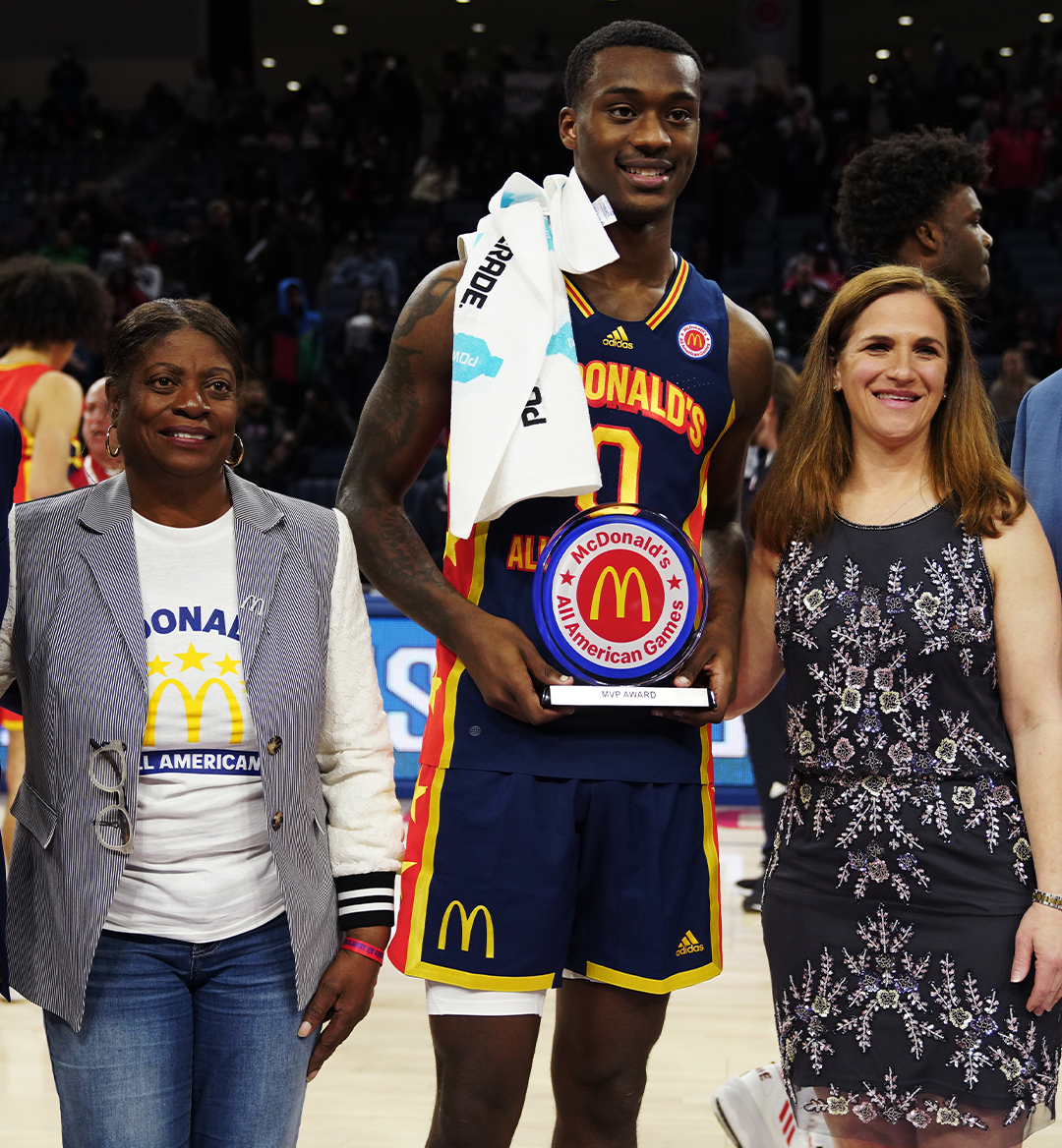 On Tuesday, March 29th, the future of men’s basketball took the floor at Wintrust Arena to showcase their talents in front of 8,261 fans. The top 24 ranked men’s hoopers in the class of 2022 absolutely put on a show for the city of Chicago. This class is extremely well rounded with some of the most athletic high-school athletes the game has seen. In a game littered with high-flying alley oops and perfectly timed full-court passes, the East was able to defeat the West in a 105-81 contest. Here is what you missed at the 2022 McDonald’s All-American men’s game.

There were a number of incredible performances throughout the game, but no one was more consistent and took a bigger leap than future Duke Blue Devil Dariq Whitehead. Whitehead was able to knock it down from deep going 3-7 beyond the arc, all while nearly dropping a triple-double. The most shocking part is that Whitehead isn’t a traditional point guard but was tasked with carrying out the role this weekend by his coaches. Whitedhead explained in the post-game press conference: “I had no intentions of coming here and playing point guard, when we got here and coach Bosley said “you’re playing point guard”, I was like, what do you mean i’m playing point guard? He said you have to, and you know, me being a team-player and always wanting to win, that's something I had to do for my team.” Dariq Whitehead went above and beyond this weekend and undoubtedly earned his MVP award.

The best defender of the night goes to #1 prospect and future Duke Blue Devil, Dereck Lively II. Lively is a 7’2” center with an excellent wing span and a knack for getting in position to jam it home on defenders. In an early sequence during the first quarter it looked like Nick Smith Jr. had beat him to the rim, but Lively was able to get back in position and swat the layup attempt. Lively was also perfect from the field hitting all five of his shots, with a majority of those coming off alley-oop passes. Duke is getting an untamed rim protector in Dereck Lively, and the rest of the NCAA should be afraid.

The breakout performance of the night goes to another future Duke Blue Devil in Mark Mitchell. Mitchell is a 6’9” forward who plays fiercely inside. Mitchell is keen at backing down defenders and finishing at the rim, but expanded his range for this game. He was able to knock down two threes and shot 62% from the field. Mitchell’s 19 points were tied for a game high with future Nova’ Wildcat Cam Whitmore. The future is bright for Duke and it looks like they are going to continue their winning ways.

There may be no consensus #1 recruit in this class, and that’s because the talent overall is at such a high level. Every player on the court could be a lottery pick in the next two years and for good reason. This class is littered with some of the most athletic boy’s in recent history and that talent will translate beautifully on the collegiate stage next year.