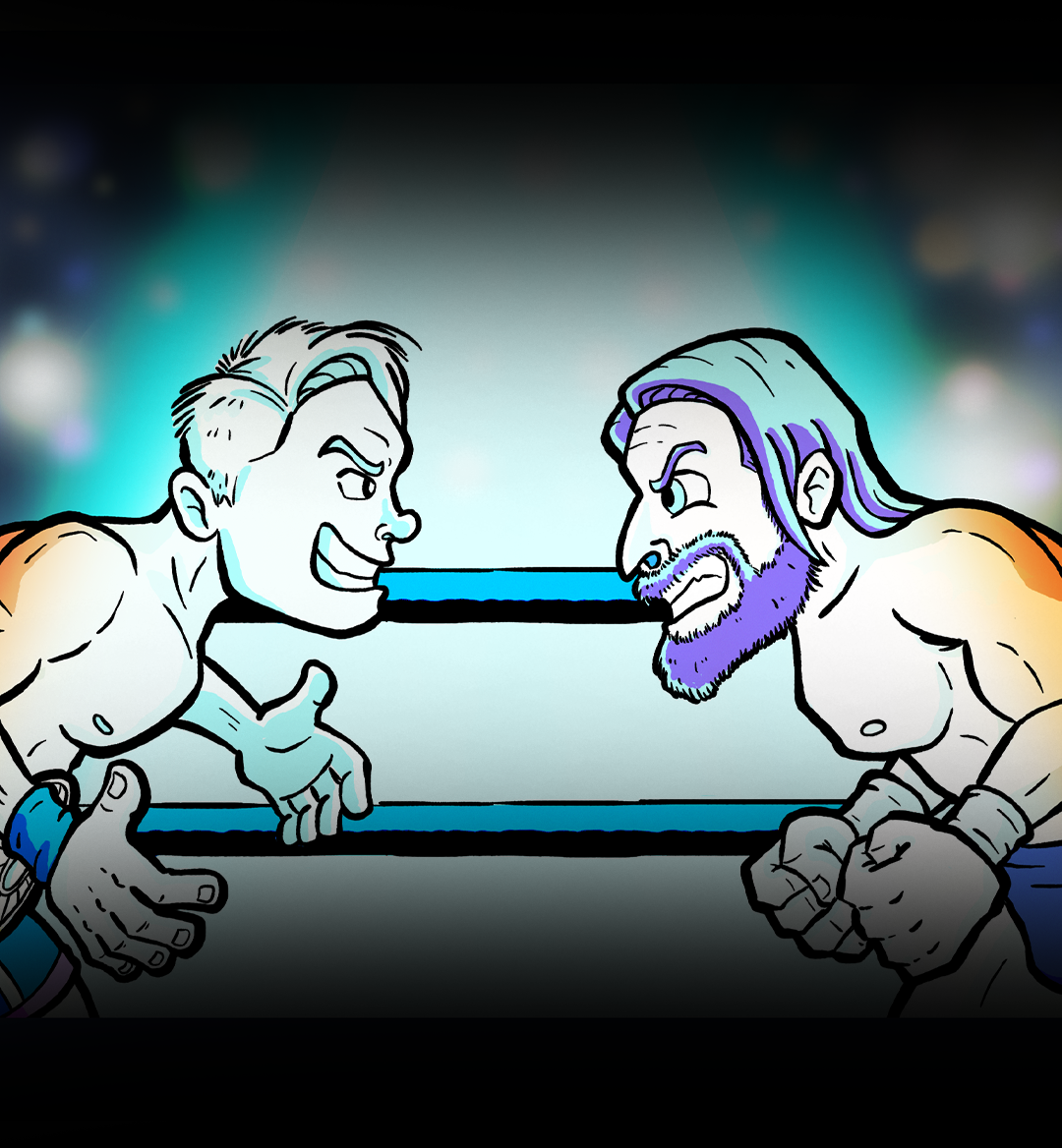 Is the term "Forbidden Door" one of the most overused phrases in wrestling right now? Yeah.

But I can't really be too mad at it since it's the trending term currently attached to one of the most exciting wrestling supercards of all time. All Elite Wrestling and New Japan Pro Wrestling have maintained a fruitful relationship for a good while now - NJPW talent such as KENTA, Minoru Suzuki, and Tomohiro Ishii have popped up on AEW shows, while Jon Moxley, Lance Archer, and Eddie Kingston have competed on NJPW Strong and other company-branded shows in the States. But now both companies are coming together to present a cross-branded PPV called AEW x NJPW: Forbidden Door, which will emanate from Chicago's United Center on June 26.

Now that that event is a reality, now's the perfect time to fantasize about the dream matches that I'm hoping to see get booked for the show. With so many marquee stars on both sides of the coin, chances are indeed high for a wrestling card that could possibly be the strongest of the year.

NJPW's reigning "Rainmaker" has remained at the top of the card since 2012. His development into one of the coolest and most dominant wrestlers within the company led to a huge surge in popularity for New Japan, which is why he's still being relied on as a top-of-the-card mainstay. As soon as Bryan Danielson joined AEW, I dreamed about the possibility of him getting the chance to also work for AEW and possibly wrestle during an entire G1 Climax tournament.

But with the announcement of this AEW x NJPW event, I'd be totally fine with the "American Dragon" taking on Kazuchika Okada on the PPV stage. Danielson is at the top of his game right now (AGAIN!) and Okada hasn't lost a step all the while. The technical work that would be at hand during this match would be amazing, I just know it! I can already envision Okada trying to hit his Rainmaker finisher and Danielson countering it right into a LeBell Lock. The crowd pop on that would be insane!

CM Punk is seemingly having the time of his life right now. Ever since he made his grand return to the sport he once left behind, Mr. Phil Brooks has worked with anyone and everyone that's been put in his way. And through it all, Punk has produced bangers with the likes of MJF, Eddie Kingston, Darby Allin, etc. Some would say that he's reached "Ace" status for AEW these days. NJPW has an ace of its own named Hiroshi Tanahashi.

Tanahashi took New Japan out of the dark ages and pushed it into a golden era that brought the Puroresu-focused wrestling fed back into the limelight. He's held the IWGP World Championship on multiple occasions and has been entrusted with working with newcomers & veterans alike. And why, you ask? Because Tanahashi is incapable of having a bad match. The same can be said about Punk, which is why I'm dying to see him try his luck against Tanahashi. I know a lot of folks are pining for Punk vs. KENTA in a Battle of the Go to Sleep masters. But I think we should get this dream match between AEW's ace and NJPW'S ace first.

Where is the "Redeemer?" Oh, how I miss Miro. Once he ditched the "Best Man" gimmick behind, he blossomed into the killer heel everyone wanted him to be in AEW in the first place. His TNT Championship reign is the stuff of legend and I'm highly anticipating his return to the ring (plus I really miss the big guy's unintentionally hilarious promos where he mentions the latest "activity" he and his wife engaged in). I feel like Tony Khan should ring Miro's phone ASAP and have him return to TV to start hyping up his AEW x NJPW clash with a fellow powerhouse. And that powerhouse is none other than Shingo Tagaki.

To see Tagaki's ascension from Dragon Gate to New Japan has been fascinating to watch. Since joining NJPW, he's opened everyone's eyes to his immense talent and shown that he can be entrusted with putting the company on his back as its IWGP World Champion. And whenever I'm in the mood to watch someone pull off amazing feats of strength, I can always count on Takagi to give me what I want. I'm definitely trying to watch two big boys go to blows like massive kaiju monsters on this PPV, which is why Miro vs. Takagi must be booked.

I already know I'm gonna wince every time a stiff lariat is thrown and a nasty suplex gets delivered during this encounter!

Adam Page vs. Will Ospreay

"Hangman" Adam Page is another one of those wrestlers that I've been following since his earliest days in the business. He went from a lower card mainstay to a reliable mid-card competitor during his strong tenure in ROH, then he graduated into a bonafide main event talent once he stepped through AEW's doors. His AEW Championship reign has been a joy to watch thus far - Page has proven his worth as a top guy against Bryan Danielson, Lance Archer, and Adam Cole all the while.

For the longest time now, Will Ospreay has been moving around the globe and having bangers with just about everybody. He's adopted more of a mean streak and a cocky demeanor that paints him as the Connor McGregor of professional wrestling, which has raised his stock even more. Pitting AEW's biggest babyface against NJPW's most hated heel sounds like a match made in heaven if you ask me. Page and Ospreay are hybrid athletes that compile different parts of numerous wrestling styles that make their offense stand out.

And for that reason alone, I'd love to see them test their best moves against each other in an in-ring classic that must go 20 minutes or more.

We got another big boy bout right here, folks! And I have a feeling Big E would even tune in to watch this go down. I already got plenty of enjoyment out of Samoa Joe and Minoru Suzuki's ROH TV Championship battle on AEW Dynamite - both men exceeded the brutality scale by repeatedly chopping the hell out of each other. The crowd seemingly agreed with my assessment of that dream match judging by their audible reaction to all the violent mayhem taking place in front of them.

Now I'm ready to see Tomohiro Ishii pull up on Joe to truly push him past his limits. Ishii is NJPW's relentless "Pitbull" and has proven to be the epitome of "Strong Style" wrestling. Matching up his approach to in-ring brutality with that of Joe's sounds like the perfect recipe for the ultimate crowd-pleaser. The chops on this match would be loud, the elbow shots would be stiff, and the suplexes would be bone crunchingly painful. I NEED THIS ONE TO GO DOWN!

Now, this match would be the "purest" clash on the entire card if it were put in place. Both Wheeler Yuta and Zack Sabre Jr. utilize a mix of tight submissions, counter holds, focused strikes, etc. in order to grind their opponents into dust. Yuta's evolved as a performer thanks to his newfound affiliation with the Blackpool Combat Club - his offense now includes even more excruciating holds that have added another dimension to his grappling game.

I'd pay all the money in the world to watch him go hold for hold against Sabre Jr. in a modern-day catch-as-can wrestling match. Suzuki-gun's limb-twisting stable member is not to be trifled with - he's made NJPW's top stars tap out and scream in agony on multiple occasions. I can just picture the crowd going wild as both technicians go back and forth with elbow shots and transition into a submission challenge for the ages!

A high-flying barnburner is essential on any wrestling PPV card, which is why I'm proposing this matchup. If Rey Fenix gets healed up in time to earn himself a match at AEW x NJPW: Forbidden Door, then I'd love to see him run wild against NJPW's best junior heavyweight, Hiromu Takahashi. Takahashi has an affinity for Lucha Libre since he's already had an extended stay down in CMLL and engaged in an amazing rivalry with luchador Ryu Lee.

With Fenix as his dancing partner here, I'm convinced that he and Takahashi would get the crowd on their feet thanks to their fast-paced antics. Not only would this be the best comeback scenario for Fenix, but it would also be an awesome introduction for Takahashi to those who haven't seen him already.

FTR vs. Guerrillas of Destiny

Tag team greatness is also essential on any wrestling show. FTR have proven to be a dependable unit that can be called upon to produce a great match with just about any team put in front of them. Since coming to AEW, Cash Wheeler and Dax Harwood have earned tons more respect thanks to their bouts with The Young Bucks, The Lucha Bros., Jurassic Express, etc.

Now that the Guerrillas of Destiny (Tama Tonga and Tanga Loa) have been excommunicated from the Bullet Club, they've adopted the NJPW lion motif once again to make their babyface allegiance clear. FTR has recently adopted a fan-favorite role themselves, so it would be incredible for these two teams to have a battle based on nothing but respect and admiration for each other's crafts. I'm sure that respect would fly out the window mid-match as both teams rain down blows and double-team maneuvers on each other.

But by the end of it, I'm sure a handshake exchange would cap it all off.