The Best Dunker in the NBA: Ranking the League's All-Time Highest Flyers 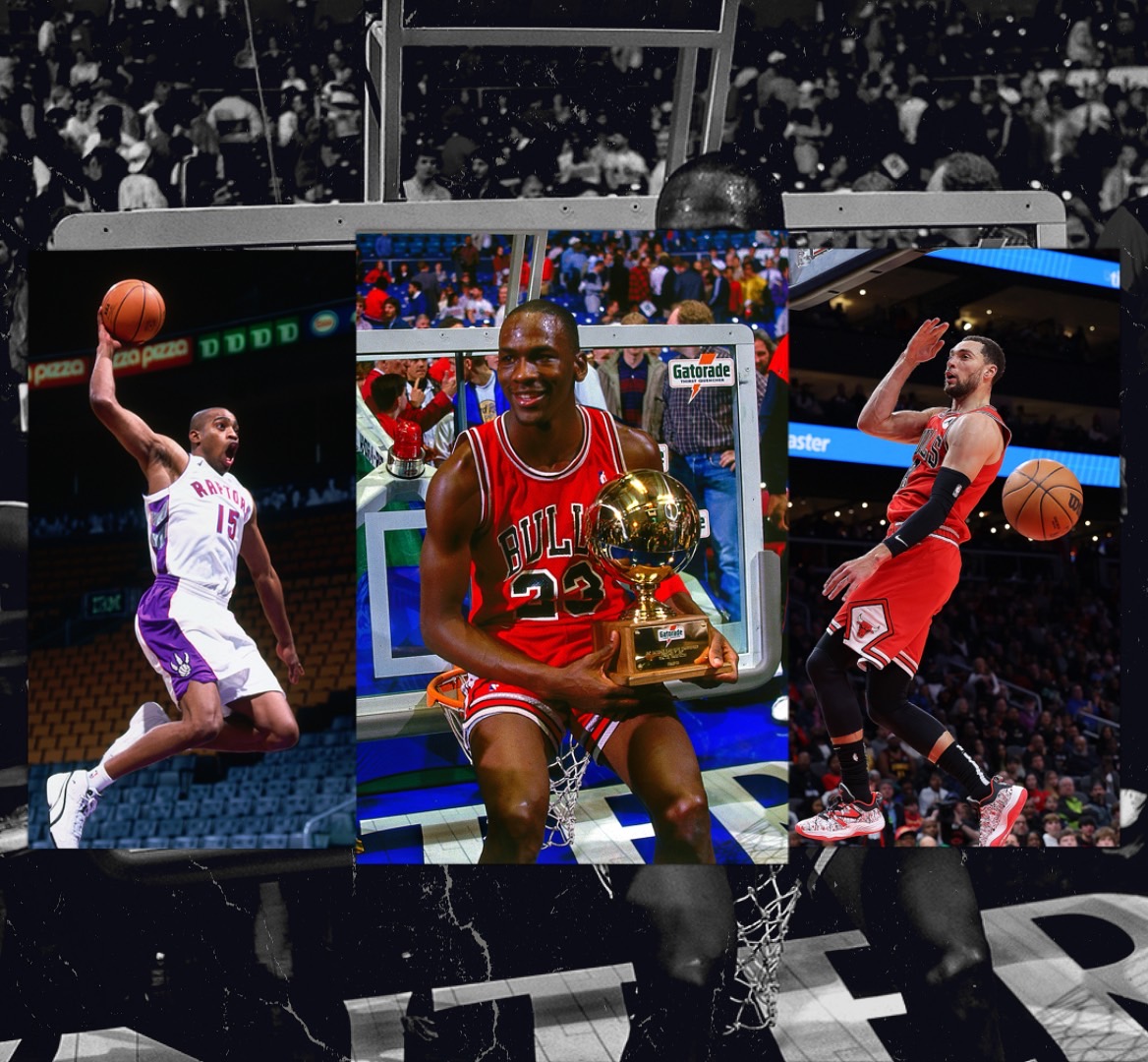 The game of basketball is so beautiful because of how fluid the game is played. Like in soccer, the game is a constant back-and-forth motion of sprinting and creativity to put a ball in a net. In the NBA, we see that creativity pushed to its limits when the leagues high flyers go up to show their skill.

RELATED: 2023 NBA MVP Race: Who Are The Favorites?

From Vince Carter jumping and clearing seven foot defenders in the olympics to Michael Jordan dunking from the free throw line in the dunk contest, the NBA has had its fair share of dunkers. Here is our list of the 20 best dunkers in NBA history.

It is truly criminal that Aaron Gordon has participated in three dunk contests and never won the event. He gave us the greatest dunk contest ever in the 2016 contest against Zach Lavine and was unfairly robbed of a dunk contest title in 2020. Gordon doesn't reserve his jams for the annual dunk contest, as he regularly rattles the rim like this.

Tracy McGrady's peak as a dunker may have been cut short due to injuries, but when he was flying he was flying high. When 100% healthy his first few years in the league McGrady gave us some of the best poster dunks in NBA history. It shouldn't be a surprise that McGrady is such a good dunker seeing that his cousin is the great Vince Carter.

Quite like the previous entry on this list, if it weren't for injuries Dwyane Wade would very likely rank higher on this list. Early in Wade's career he was absolutely fearless and determined to get to the rim on any occasion. His most iconic dunk came against the Cavaliers where he dunked on Anderson Varejao so hard it sent him into the stanchion.

The greatest robin in NBA history, Pippen helped Michael Jordan and the Chicago Bulls win six championships across the 90's. Pippen was well known for his defense, but when he get a head of steam down the court you'd better clear the lane. His most memorable poster, and considered by some the greatest poster in NBA history, came against the New York Knicks where he skied over Knicks legendary center Patrick Ewing. Extra points for the step-over Pippen gives Ewings after takeoff.

If you can make Kevin Harlan exclaim "We just saw a man fly!" then you just did something ungodly on a basketball court, and that's what a young J.R. Smith did on the regular. Before Smith was being remembered for bad clock management in the NBA Finals he was soaring atop defenders with athleticism we've never seen before. There will always be a spot for J.R. Smith on this list.

If I'm being honest, LeBron James should be higher on this list. The King has never given us the privilege of witnessing him in a dunk contest and I'm still salty about it, so he sits squarely in the top 15. There are so many memorable posters and dunks that James has in his highlight tapes, but none stands the test of time truly like the lob he caught from Dwyane Wade back in his Heat days.

Blake Griffin helped bring the NBAs dunk contest back to it's glory days after his incredible performance in 2011. He capped off that contest by flying over a car and jamming home a perfect 50. Beyond that dunk contest, Griffin has an extensive resumé of poster dunks and insane alley-oops. Although he is aging now, Griffin still shows signs of that dunking maestro today on the Celtics.

Jason Richardson took the reigns from Vince Carter in the early 2000's and kept the tradition of the dunk contest alive. He would win back-to-back titles 2002-2003. From the East Bay dunks to the thru the leg alley oops, Richardson gave us a masterclass on how to excite a slam dunk contest crowd. The control that J-Rich has with his body while in-flight is second to none in the NBA's history.

Zach Lavine has always been known for his unreal athleticism, winning dunk contest since he was in high school. The world would get it's full introduction to 'Air Zach' at the 2015 dunk contest. Lavine but together the best performance since Blake Griffin in 2011 and in-turn revived the dunk contest. He would follow that up with quite possibly the greatest dunk contest ever in 2016 against Aaron Gordon, which he of course would win again.

Of everyone in the NBA, open dunk, fate of the universe on the line or the martians have the death beam pointed at earth you better hit it; I WANT IGUODALA. A prime Iguodala was a menace at the rim, especially in his early postseason days with the 76er's. We may never see Iggy hit the same type of dunks but the OG's will always remember how athletic he really was.

The name Gerald Green may not jump out to some basketball fans, but if you were deprived of Green's dunking ability in the 2000's I genuinely feel bad for you. One of the craziest aspects about Greens dunking ability is that he only has four fingers. Due to a childhood accident, Green lost his ring finger, but is still able to pull of insane dunks. He will most be remembered for this electric alley-oop windmill against the Houston Rockets.

If it wasn't for Michael Jordan, we may remember Clyde Drexler as a top 10 player all-time. Unfortunately for Drexler, he will never get his full credit or respect because of the shadow he played in. That doesn't take away from what he was able to do in the air. Drexler routinely skied high to throw down dunks and was a constant threat on the drive.

It's a little known fact that the player Michael Jordan dreamed of being when he was a kid was Denver Nuggets great David Thompson. Thompson was a one-of-a-kind player who carried himself with a high level of swagger. His high-flying antics and incredible dunks are what inspired MJ, and I am forever grateful for that.

Darryl Dawkins, also known as 'Chocolate Thunder', is a seminal figure in the landscape of dunkers in the NBA. He routinely would throw down dunks so hard that it would quite literally shatter the backboard. There is nothing more fulfilling as a power dunker than absolutely destroying a rim.

Notable dunk: Poster against the Nets

Before Kobe was embattled with injuries and pushing his body for just one more extra season in the NBA, he was posterizing and dunking on anyone and everyone. A young Kobe Bryant will be remembered for his relentless attack at the rim and fear of no one. Later in his career he did have a massive jam over three Nets defenders to help keep the Lakers in the game, a play he will always be remembered for.

Shawn Kemp reveled in posterizing defenders, and made sure they knew it. His most memorable dunk came agains the Golden State Warriors. Kemp was given the ball at the top of the key, took one dribble, and then sent Alton Lister into the ground. This will be remembered for maybe the greatest celebration after a poster dunk in NBA history.

The longevity and showmanship of Dominique Wilkins is otherworldly. In 19992, Wilkins tour his ACL and still able to recover and comeback as a 20 point per game scorer. He would play until he was 40 years old and participated in multiple dunk contests. There is one thing for sure, if you were seeing a game with Dominique Wilkins in it, you were in for quite the show.

Julius Erving may not be 1st on this list, but he may be the most important dunker in NBA history. Erving had incredible athleticism and was wildly creative in the air. He was the first person to dunk from the free-throw line during a dunk contest, and regularly put defenders on posters.

Michael Jordan earned his nickname 'Air' Jordan, because the man could literally fly. When Jordan would rise up to poster a defender or slam down a fast-break jam, he would soar throw the sky like an eagle before pushing the rim. From winning two dunk contests to posterizing the biggest and best defenders in the league, almost no one could do it like Jordan.

Notable dunk: Dunk over Frederic Weis at the 2000 Sydney Olympics

In the lore of the NBA overall, the 2000 dunk contest is one of it's seminal moments. Vince Carter delivered four straight rounds of dunks that we thought weren't humanly possibly. It spawned so many memes from Shaq with a giant camera recording the dunks to Kenny Smith exclaiming "It's over ladies and gentleman" after Carter's last dunk attempt.

The most memorable of Carter's dunks comes at the 2000 Sydney Olympic Games. After a turnover from the French team in their own half, Vince Carter literally jumps over seven foot tall defender Frederic Weis and throws down a dunk. This dunk was so devastating it actually sent Weis into retirement.