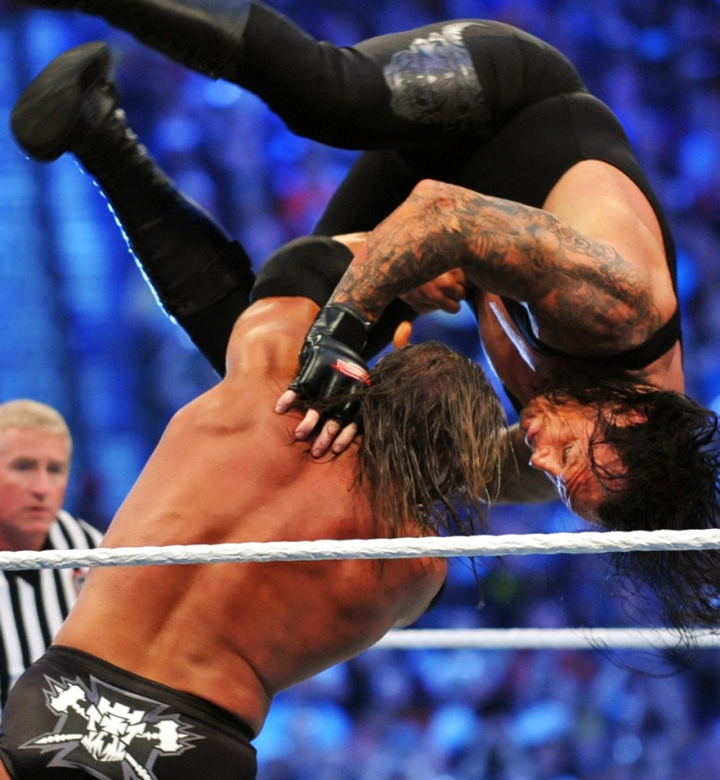 The wild and wonderful world of professional wrestling has been so good to us over the years.

Yes, there have been several odd booking decisions and terrible matches that have made us question our fandom. But there have also been many high spots (pun intended) that have given wrestling fans plenty of reasons to keep watching. American, Japanese, Mexican, and U.K. wrestling feds have fed our appetites with a wondrous array of standout bouts worth replaying over and over again.

It’s time to look back on the wrestling matches that clearly defined the last decade. More specifically, the WWE main roster bouts even caused Dave Meltzer to beam with pride once they came to a close. Thanks to the strong efforts put in by WWE legends such as The Undertaker, Triple H, Shawn Michaels, John Cena, and numerous others, the period of 2010-2019 was jam-packed with fantastic in-ring contests.

And now seems like the perfect time to reflect on the very best.

1. The Undertaker vs. Shawn Michaels at WrestleMania 26

The sequel to the best match contended at WrestleMania 25 delivered in spades. The Undertaker and Shawn Michaels topped themselves with a rematch that tugged at everyone’s heartstrings. HBK’s taunting caused ‘Taker to brutalize Michaels even more than before, while HBK held on for dear life and looked to be on the verge of victory several times. The main event of ‘Mania 26 gave us the perfect sendoff for Shawn Michaels.

CM Punk’s pipe bomb promo set this bout up perfectly and made everyone pay close attention once it finally took place. The crowd approval for this bout was off the charts, which gave this WWE Championship bout the extra life it deserved. “The Voice of the Voiceless” took on WWE’s golden boy and took everyone on a wild ride. This is the match that gave us WWE’s version of the “Summer of Punk” and produced the iconic image of Punk blowing a kiss at a perturbed Vince McMahon.

WWE’s resident destroyer returned to WWE in 2012 with his sights set on John Cena. Once both men came to blows, their no-holds-barred clash stood out from the rest of WWE’s relatively clean match formula. Brock reached into his MMA moveset to showcase a new form of offense, which forced Cena to step up his game to combat a much larger foe. Brock’s WWE return match was a sign of great things to come.

4. The Undertaker vs. Triple H at WrestleMania 28

Two of the most remarkable talents in WWE history locked horns in this classic Hell in a Cell match. And as luck would have it, a fellow legend (Shawn Michaels) was on hand to officiate the brutal proceedings. The Undertaker and Triple H easily topped their WrestleMania 27 encounter during this weapons-filled brawl. We all popped hard after ‘Taker ate a Sweet Chin Music/Pedigree combo and thought the streak was truly coming to an end. That standout moment and the rest of this bout still stand the test of time.

The Road to WrestleMania 29 was quite the ride. And thanks to the awesome Monday night matchup pitted between John Cena and CM Punk, that time span became even more worthwhile. Punk certainly had a chip on his shoulder here, which seemed to up his game even more than usual. Cena was there to give Punk one of his best matches of all time and was even willing to eat a rare Piledriver. Both men’s immense chemistry with each other was on full display here in front of a super appreciative crowd. Now, this should have been the main event of ‘Mania 29.

6. The Undertaker vs. CM Punk at WrestleMania 29

The streak was still intact going into this major event. But CM Punk’s "never say die" attitude almost pushed him to victory over the “Deadman.” In the best match on the entire WrestleMania 29 card, Punk and The Undertaker brought the MetLife Stadium crowd to life with their exciting encounter. Punk poured salt into ‘Taker’s wounds by pulling off an “Old School” maneuver on him and pushing him to his very limits. ‘Taker looked as strong as ever though and fed Punk a devastating Tombstone Piledriver to bring their epic encounter to a fitting end.

Far too many die-hard wrestling fans doubted CM Punk’s chances of looking credible against Brock Lesnar when this “no disqualification” match was announced. But by the end of it, Punk turned a lot of haters into believers. “The Best vs. The Beast” was an amazingly paced, drag-out brawl full of stiff strikes, weapons galore, and a slew of breathtaking near-falls. Punk didn’t look out of place against the much larger MMA behemoth as he took a beatdown and even delivered one of his own. Punk and Brock were definitely at their best here.

The “YES!” Movement reached another plateau thanks to this intense WWE Championship match. John Cena further proved he had evolved as an in-ring technician as he stood toe to toe with the technical wrestling wizard that is Daniel Bryan. Even with a severe elbow injury, Cena went out and produced in-ring magic with one of WWE’s biggest babyfaces. Daniel’s hard-fought victory felt even more special as it came after contending with Cena in one of SummerSlam’s greatest bouts.

9. Cody Rhodes and Goldust vs. The Shield at Battleground 2013

Emotions ran high as the Rhodes family fought for their very careers against WWE’s most feared stable at the time. Cody Rhodes and Goldust kicked things up a notch when they stepped into the ring with Seth Rollins and Roman Reigns. Dusty Rhodes’s proud sons held on for dear life and fought like it was their last day on Earth, which gave this tag team bout an extra sense of urgency. The action was satisfying, the outside shenanigans were welcome and the end result put a lot of smiles on faces in the crowd and at home. Cody and Goldust vs. The Shield is a modern-day tag team classic.

10. The Shield vs. The Wyatt Family at Elimination Chamber 2014

The initial faceoff between these two three-man forces sent the crowd into a frenzy. The anticipation built to a fever pitch by the time The Shield and The Wyatt Family finally clashed. And thankfully, it was well worth the wait. This six-man tag team match was nothing short of a war that saw both sides display their dominance in a myriad of crowd-popping ways. Roman Reigns’ hot comeback sequence, Seth Rollins’s Spanish announce table bump, and The Wyatt Family’s final destruction of Reigns are just a few of the awesome moments that transpired during this matchup.

Daniel Bryan’s glass ceiling came in the form of Triple H himself. In order to get added to the main event of WrestleMania 30, Bryan had to get through his biggest detractor first. The clash between the people’s choice and the big corporate boss man was one for the ages. HHH’s focused offense on Bryan’s injured shoulder had everyone on the edge of his or her seat, but Bryan gave those same fans hope by going twice as hard at his oppressor. The final flying knee Bryan sent into HHH’s face ended one of the best openers in ‘Mania history.

This triple threat WWE World Heavyweight Championship match kicked off 2015 in the best way possible. Mr. “Suplex City” came in like a bulldozer when pitted against John Cena and the holder of the Money in the Bank briefcase at the time. Lesnar handed out plenty of German Suplexes for good measure, but Cena and Rollins cut him off at several points throughout this bout. This match is extra special because it truly marked the main event arrival of Rollins. As far as triple threat matches go, this one ranks among the best.

Going into this match, the fans were none too keen on WWE’s choice as the new number one guy. But due to Roman Reigns’ performance during this WWE World Heavyweight Championship battle, Reigns gained a bunch of new supporters in the process. Brock Lesnar showcased his extra vicious nature by stiffing Reigns with brutal shots and suplexing him into submission. But Reigns’ comeback sequence made the crowd go wild and kicked this match up several notches. The added element of Seth Rollins’ MITB cash-in blew everyone’s minds and turned this match into an unforgettable moment.

14. Charlotte Flair vs. Becky Lynch vs. Sasha Banks at WrestleMania 32

This phenomenal women’s title match marked the end of the Divas Championship era and the beginning of the much more welcomed Women’s Revolution. Charlotte Flair, Becky Lynch, and Sasha Banks graduated from NXT and retained their high level of combined amazing match potential in the process. All three women easily took home Match of the Night honors with this barnburner of a match. The grand entrances, the special gear each woman wore, and the nonstop action all came together to produce a top-notch women’s bout. History was indeed made here.

The world never knew they wanted AJ Styles vs. John Cena until both men were in the ring together during a Raw promo. SummerSlam 2016 played the part of their second meeting and delivered one of the best rematches the wrestling world has ever seen. Cena was arguably at his best at this stage and provided AJ with a ready and willing dance partner for much of 2016. This match easily surpassed its predecessor and gave us quite the shocker in the form of a clean AJ win. The final Phenomenal Elbow AJ fed to Cena marked his welcome ascension to WWE legend.

Somehow, they did it. AJ Styles and John Cena took their feud to another level and presented a rematch that surpassed all their previous efforts. And this time, a huge prize was at stake—the WWE Championship. This climactic clash featured callbacks to their past bouts, even more usage of both men’s finishing maneuvers, and some clever counters on Cena’s part. The story of Cena adjusting his usual game plan and picking his spots more carefully was well told here. His triumphant win was the perfect closer to such a memorable feud.

17. Kurt Angle and Ronda Rousey vs. Triple H and Stephanie McMahon at WrestleMania 34

Who would have thought that this match would ever become a reality? Kurt Angle’s WrestleMania return was to happen right alongside former UFC star Ronda Rousey’s WWE in-ring debut. And both individuals would make history against Triple H and Stephanie McMahon, WWE’s undisputed power couple. In a complete shocker, this match ended up being the very best of the entire event. Rousey looked like a natural as she came to blows with Stephanie and made the crowd go wild when she laid in some MMA strikes on HHH. This mixed tag greatly exceeded its expectations and proved that Rousey had finally arrived.

“Kofimania” was in full swing in 2019. After fighting his way through the roadblocks put in his way by Vince McMahon, Kofi Kingston finally got what he so rightfully deserved—a WWE Championship match against Daniel Bryan. The crowd was taken on an emotional roller coaster during this heart-stopping WWE Championship matchup. With his New Day brothers by his side, Kofi conquered the bearded villain and gave the WWE Universe one of the most memorable title wins of the decade. And it all came after a phenomenal matchup between SmackDown’s best and brightest.