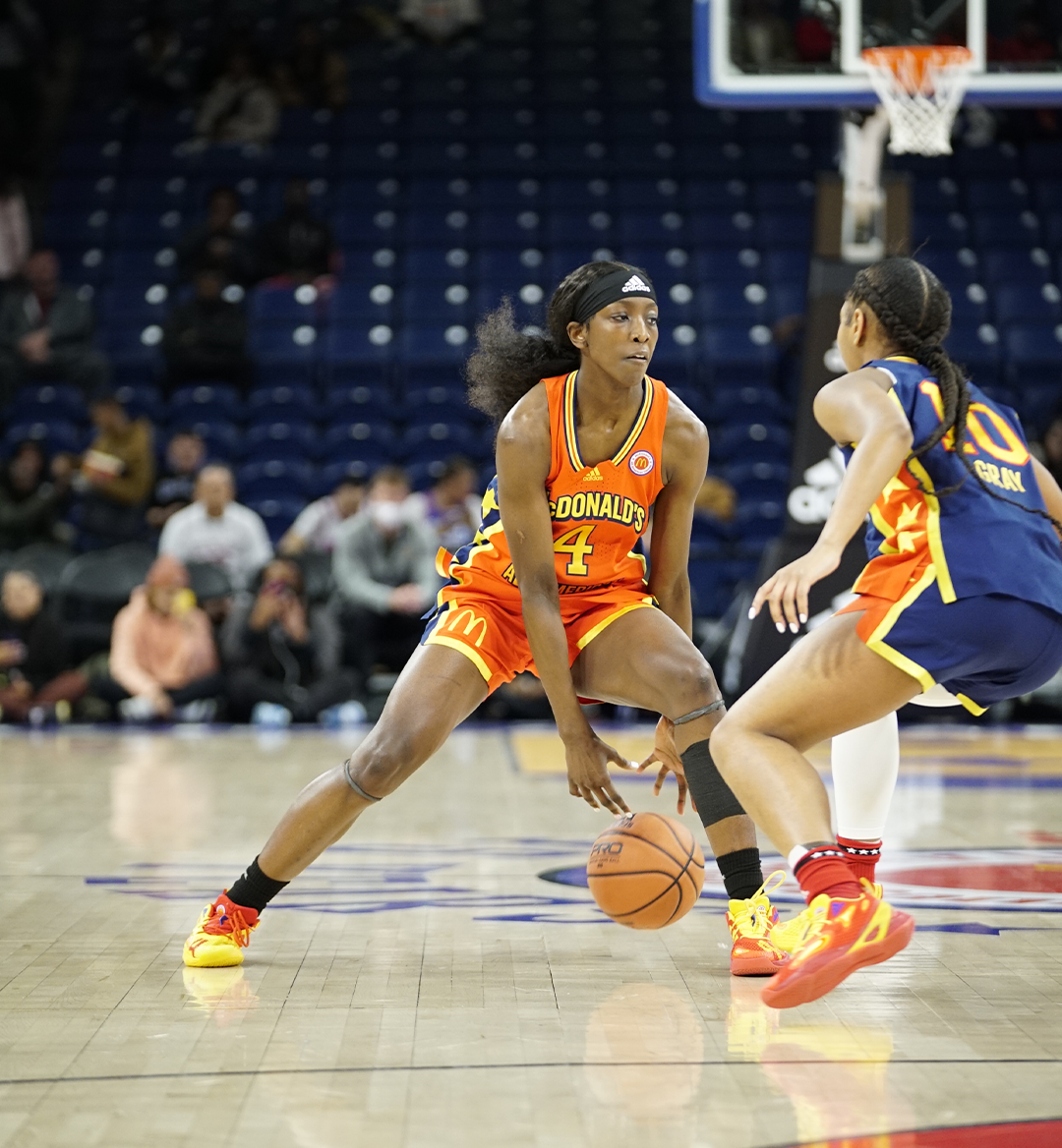 Giving an interview is not easy. You have to be prepared to answer any and all questions, and most likely you are talking to someone you’ve never met before. Some people, however, are born to be in front of the camera. It is just natural for them. Flau’Jae Johnson, a hybrid hooper-musician, is an example, and that’s because this is nothing new to her. Johnson has been in the lime-light since she was 13 years old on shows like “The Rap Game” and “America’s Got Talent”. The 5'10” guard will be continuing both her basketball and rap careers at Louisiana State University next season under Coach Kim Mulkey, and It's going to be exciting to see what's next for the 2022 McDonald's All-American. Check out ONE37pm's chat with the impressive rapper-turned-baller.

ONE37pm: One of the taglines on your merch is "it's hard where we come from". Can you tell us a little about the meaning behind that?

Flau’Jae: Yes, thank you. I made a song called “Come From” and it was just speaking on how I'm from Savannah, Georgia, and a lot of people don’t come out. [There's] violence, poverty, and murder, and stuff like that. It’s hard where we come from, and I just wanted to put that on a shirt and put that out because a lot of people can relate to that.

ONE37pm: What does that mean to you to represent Savannah, Georgia?

Flau’Jae: It means everything to me, because that’s what my father was doing before he was tragically murdered in the city. He was doing his music and he was rapping, he was putting on for the city, so I feel like it’s my duty to carry on that legacy.

ONE37pm: With the new Name, Image and Likeness (NIL) deal in place for college athletes you're now able to pursue and profit off of your music career. Before the current NIL rules were put in place, did you ever think that you’d have to choose between your two passions and if so what was that like?

Flau’Jae: That was never a thought for me, because a lot of people don’t know I really just started taking basketball seriously two years ago. I started getting training and just got on the EYBL [Nike's Elite Youth Basketball League] circuit and so in my head I'm like I'm just a rapper you know what I mean? I didn’t even know anything about college and didn’t plan on going to college. I just planned on pursuing music, so the fact that the NIL deal came into effect by the time I was coming to college was just a blessing honestly. That’s how I looked at it. I never thought I'd have to choose. I remember I was getting recruited by colleges and they were like, “well, which one do you want to do?” and I was like, “you’re scratched off the list.” So when I talked to coach Mulkey at LSU and she was like “we're gonna put you on both, we’re gonna make you the best person you can be overall”, that’s when I knew I was at the right school.

ONE37pm: That is really awesome to hear. You recently broke the Sprayberry High School single-game three-point record hitting 12 three-pointers in a game. What was that moment like for you to have the whole crowd behind you wanting to break that record and being that locked in?

Flau’Jae: It felt like I was on the highest mountain in the world. You’re on cloud nine during those moments and my team was just finding me, getting me the ball. I told them, I feel it today. I was in warmups. I went like twelve for twelve. I said oh yeah, it’s that time. Give it to me. I got you, and I did my thing. I broke the record, and it was just an honor for real for real. Everybody was cheering. It was lit.

ONE37pm: Thank you so much Flau’Jae and we want to wish you the best of luck on your journey!

Flau’Jae: Thank you so much!