Updated: Which NFL Players Will Be Cut or Traded? 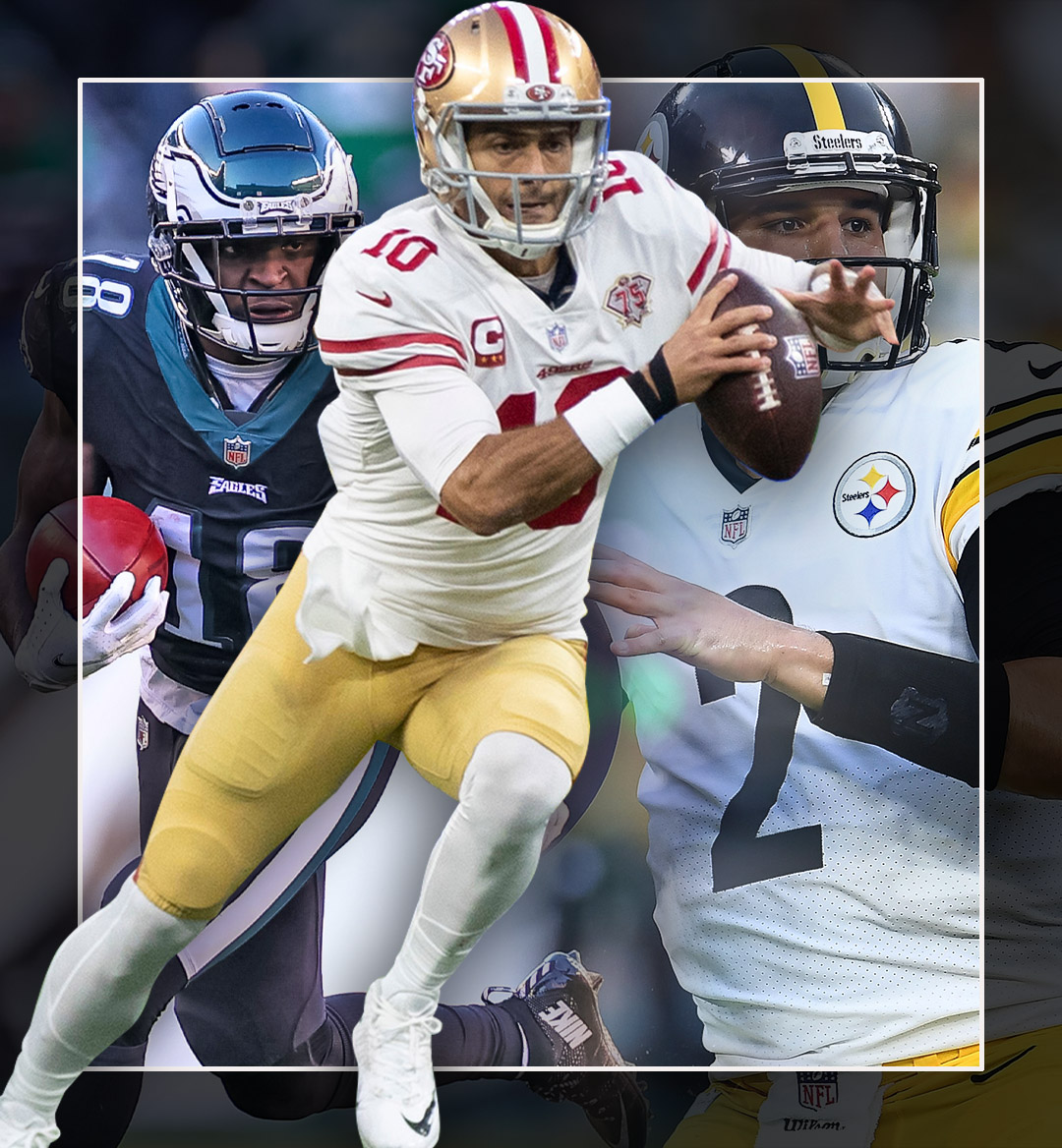 Which NFL players will be cut or traded this week?

The preseason is over and we are now less than two weeks away from the Buffalo Bills visiting SoFi Stadium to take on the defending champion Los Angeles Rams to open the 2022 regular season.

Before that happens, teams must trim their rosters down to 53 players by the August 30th deadline, and several high-profile names are rumored to be either on the trade block or in danger of being cut outright.

Here is my list of the top 10 NFL players who will be cut or traded ahead of the deadline: 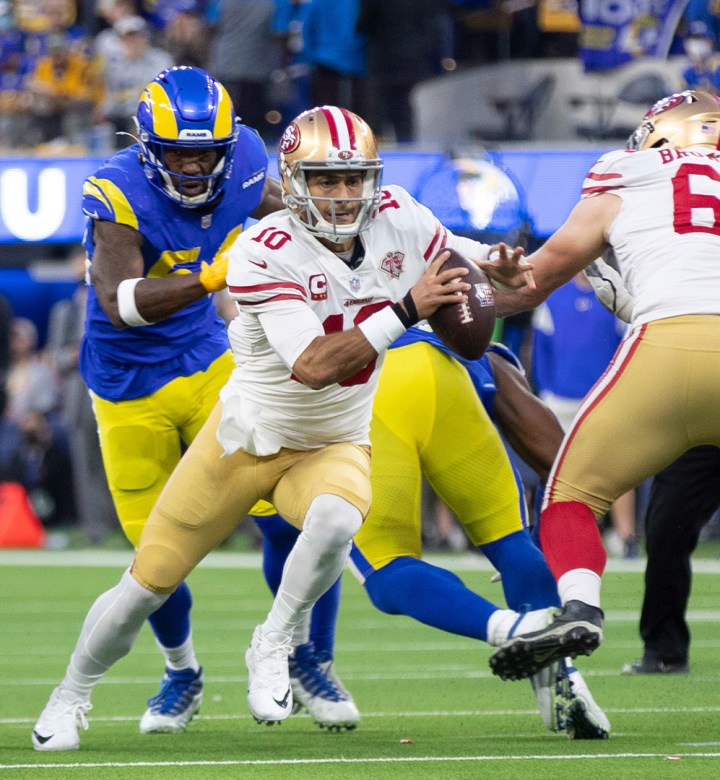 “Jimmy G” is the most interesting name on this list. The 49ers seem to have the pieces in place for a legit playoff run and all Garoppolo does is win ballgames. With a lifetime 45-18 record and a 98.9 rating, it would seem to be counterproductive to remove him from a team that has big goals entering the 2022 season.

However, after drafting Trey Lance in the first round of the 2021 draft – even with an uneven preseason performance that has some questioning whether he is ready to take over the QB1 spot – he is the future of the 49ers. With $25 million guaranteed dollars headed Garoppolo’s way if he’s on the roster past August 30, the only way he doesn’t get cut is if he gets traded first.

Update: Jimmy G has restructured his contract and will remain with the Niners next year on a one-year deal worth $6.5 million. 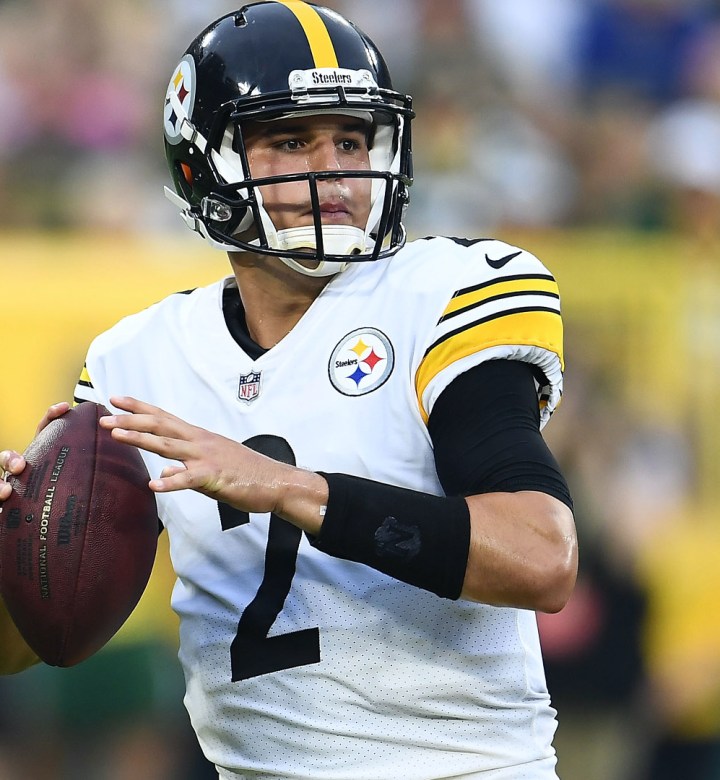 Rudolph’s roster spot has been in jeopardy for quite a while. The Steelers signed free agent Mitch Trubisky and drafted hometown quarterback Kenny Pickett in the first round this offseason.

Much like Jimmy G, the only question seems to be if Rudolph will be cut or traded ahead of the deadline. However, Steelers fans shouldn’t get themselves overly excited about what they may get back in return for the five-year veteran. The Vikings and Raiders recently swapped quarterback Nick Mullens for a conditional 7th-round pick in 2024. Compensation would likely be in that range if they can find a trade partner.

Update: Rudolph remains on the Steelers 53-man roster (for now) but I would still not be surprised if he is traded before opening day. 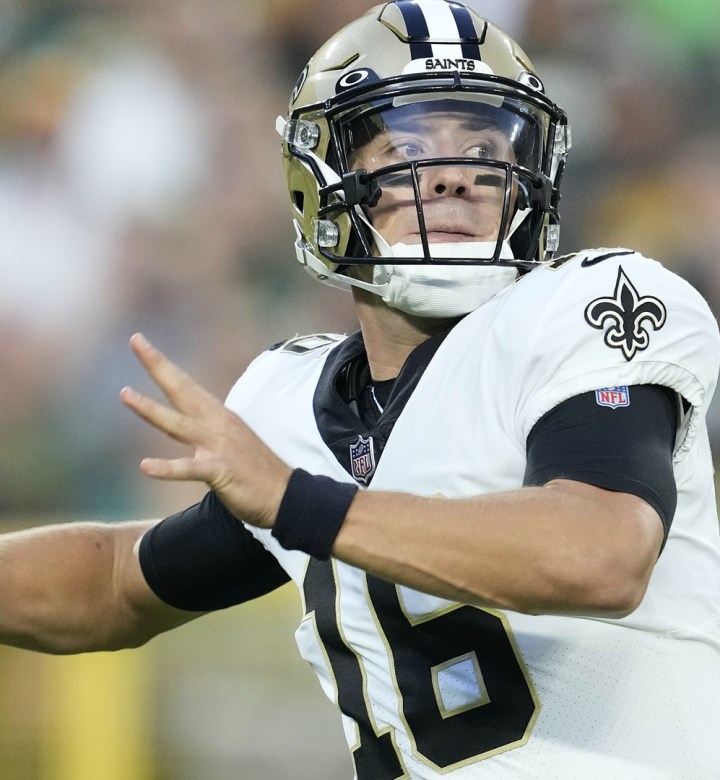 With Jameis Winston set to be QB1, Andy Dalton as the backup, and Taysom Hill on the roster as the change-of-pace guy/emergency quarterback, there doesn’t seem to be a spot on the 53-man roster available for the former Notre Dame QB.

Book was selected in the 4th round of last year’s draft. That relatively high selection may be enough for him to at least stick around on the practice squad.

Update: Book was released and signed by the Philadelphia Eagles. 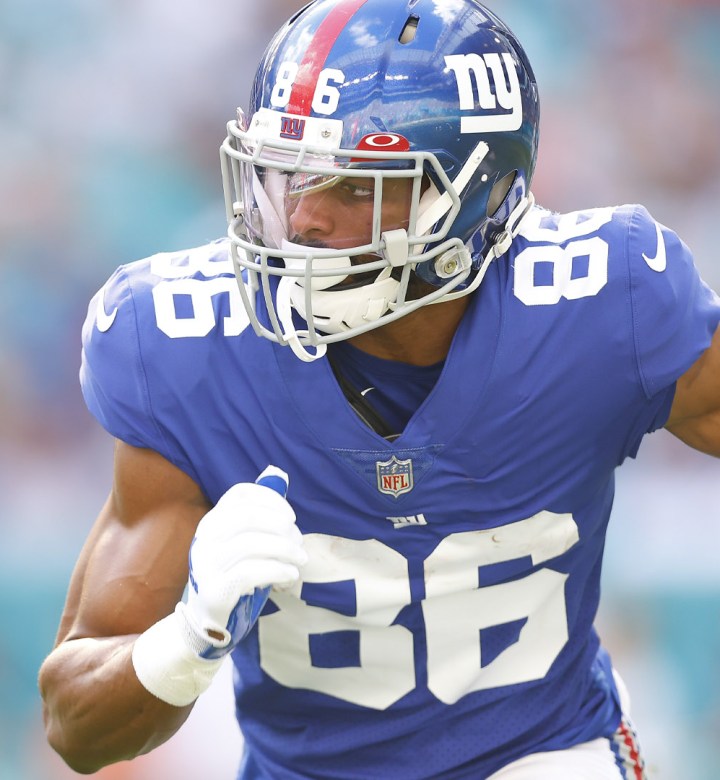 In what would likely be a salary cap move, the Giants seem to be looking to move on from Slayton. He is set to earn $2.5 million dollars against the cap in 2022 with just over $58,000 in dead cap if he’s cut. With Big Blue having just around $5 million in cap space, they can certainly use the savings.

While Slayton is one of the Giants' most experienced receivers, the former 6th-round pick in 2019 hasn’t exactly built upon his successful rookie campaign in which he caught 48 balls for 740 yards and 9 touchdowns. With Sterling Shephard, Kadarius Toney, and second-round pick Wan’Dale Robinson firmly in the mix, it’s very likely that Slayton will be playing elsewhere in 2022.

Most likely landing spot: Slayton was retained by the Giants but rumors continue to exist about potential trade offers.

Their job is to do what’s best for this team. So if somebody calls them and like if the Rams called and were like we’ll give you Aaron Donald for Darius Slayton, I mean I’d make that trade, too. 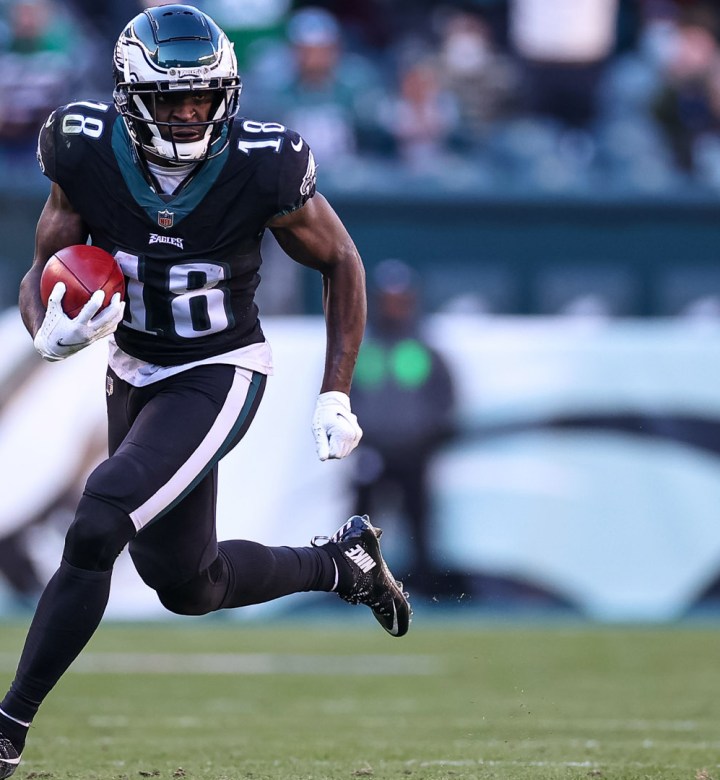 Raegor was selected by the Eagles in the first round of the 2020 draft out of TCU, and big things were expected of him. However, he has just 64 catches for 695 yards and 3 touchdowns combined over his first two seasons.

Raegor has some upside and a ton of speed, so it’s likely that some team would be willing to part with a mid-late round pick for him.

Update: Reagor was traded to the Minnesota Vikings for a 2023 seventh-round pick and a 2024 conditional fourth-round pick that would drop to a fifth-rounder if he doesn't hit certain statistical marks.

Who can forget the Vikings draft war room the night the Eagles drafted Reagor just one pick ahead of Minnesota as they targeted Justin Jefferson, who looks to be on the verge of superstardom. 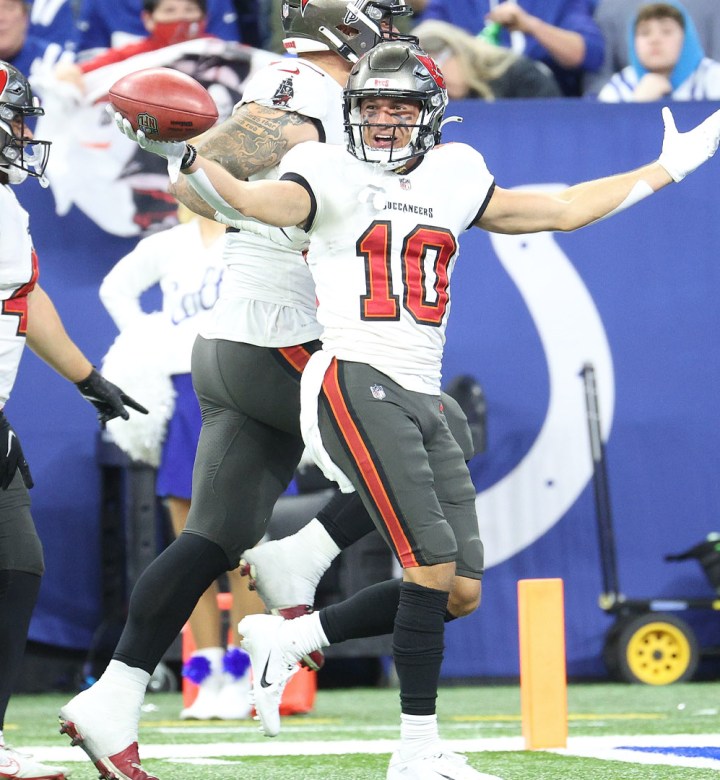 Scotty Miller made one of the biggest plays of the 2020 NFC Championship game and certainly has some talent, but the Bucs are loaded at wide receiver. Mike Evans, Chris Godwin, Julio Jones, and Russell Gage all have spots locked up. That leaves Miller battling with Brashard Perriman and talented young receivers like Tyler Johnson, Jaelon Darden, as well as a fresh crop of rookies for a roster spot.

Update: The Bucs decided to waive their former fifth-round pick out of Minnesota, Tyler Johnson and instead keep Scotty Miller on the 53-man roster. 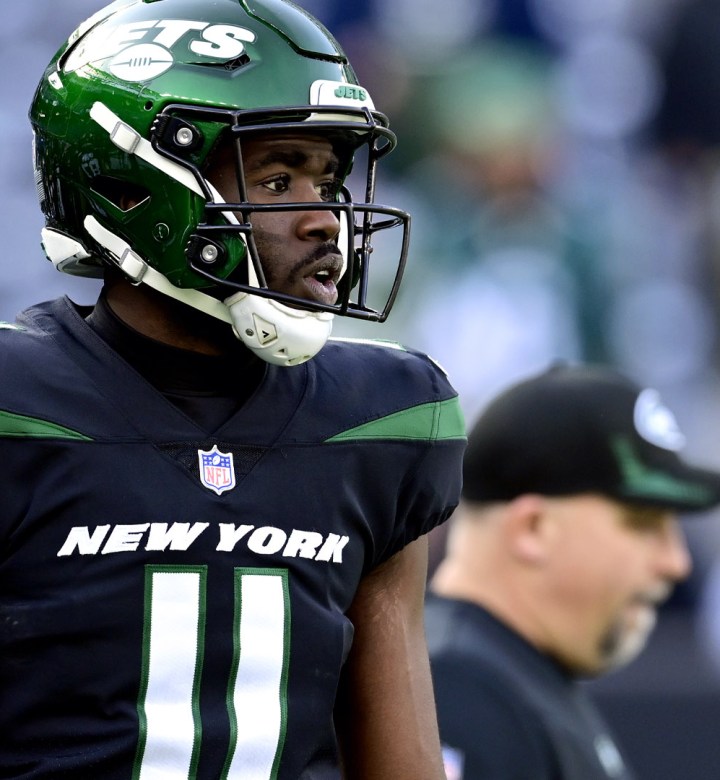 Denzel Mims had a solid rookie season after the Jets selected him in the second round of the 2020 draft out of Baylor. However, he quickly fell out of favor with the current coaching staff and last year was a complete disaster. Coming into training camp, Mims was fighting an uphill battle, with Corey Davis, Elijah Moore, Braxton Berrios, and 2022 first-round pick Garrett Wilson having guaranteed roster spots. Opportunities were few in preseason games, culminating in a trade request from Mims's agent last week.

There is enough talent there for the Jets to get something in return for him, as evidenced by his impressive 6-catch, 103-yard, 1 touchdown performance in the final preseason game. Will his former Baylor head coach (Matt Rhule) want him in Carolina? Will the Cowboys bring him back to Texas?

Saleh on Mims: "He's on this roster. He's one of our best 6 WRs." All other questions for Joe Douglas. #Jets 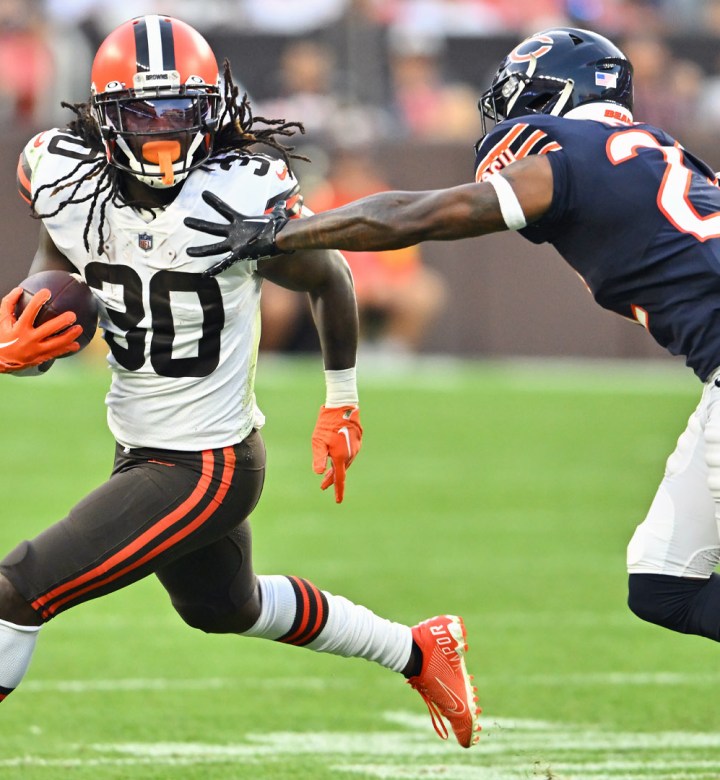 Anybody who plays fantasy football knows that D’Ernest Johnson can run the ball! With Nick Chubb injured, Johnson took over the Browns backfield for three games last season. He put up extremely impressive numbers, reaching 23+ touches for 130+ yards and 20+ fantasy points in every game.

With that said, the Browns enter the 2022 season with Nick Chubb and Kareem Hunt fully healthy. They also have 2022 5th round pick Jerome Ford and 2021 6th round WR/RB Demetric Felton–who is a core special teamer–in the fold.

There are rumblings that Johnson could be used as trade bait to bring in some depth at wide receiver.

Update: The Browns decided to keep 5 running backs on the roster and Johnson looks to be safely in line to suit up on opening day. 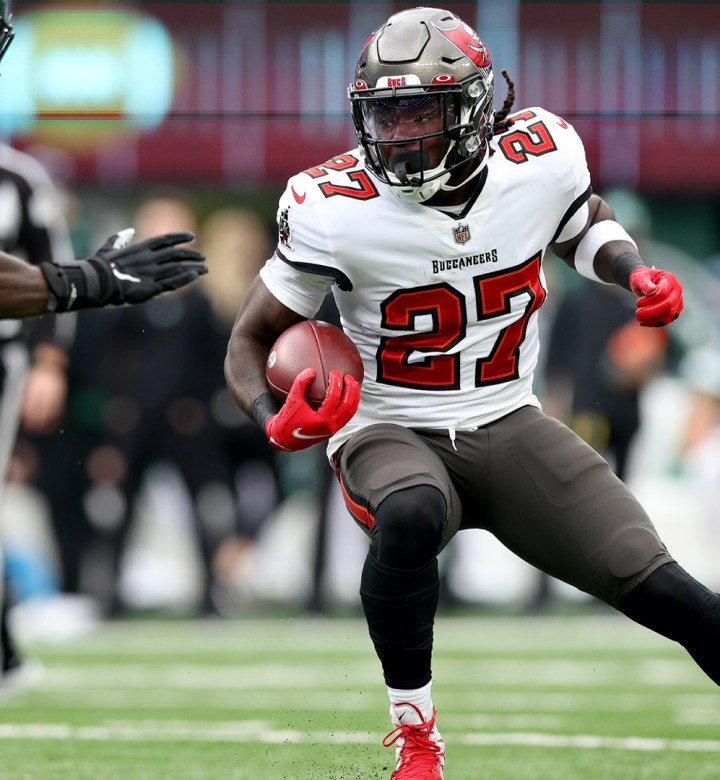 Jones has a one-year $1.5 million dollar contract with just $500,000 guaranteed, so the Chiefs would save $1 million by cutting him. They currently have three running backs ahead of Jones on the depth chart in Clyde Edwards-Helaire, Jerick McKinnon, and rookie Isiah Pacheco, so it seems unlikely that they would keep him on the roster as 4th string depth.

There will likely be many teams that are interested in the 25-year-old former Tampa Bay Buccaneer if the Chiefs do indeed cut him.

Update: The Rams held on to Ronald Jones, although a trade is still possible.

Andy Reid: "I thought RoJo did a nice job down the stretch, and we know what he's capable of. It's a matter of him being comfortable in the offense. [We] throw a lot at the running backs, and it looked like he was starting to get it down the stretch there. Good football player." 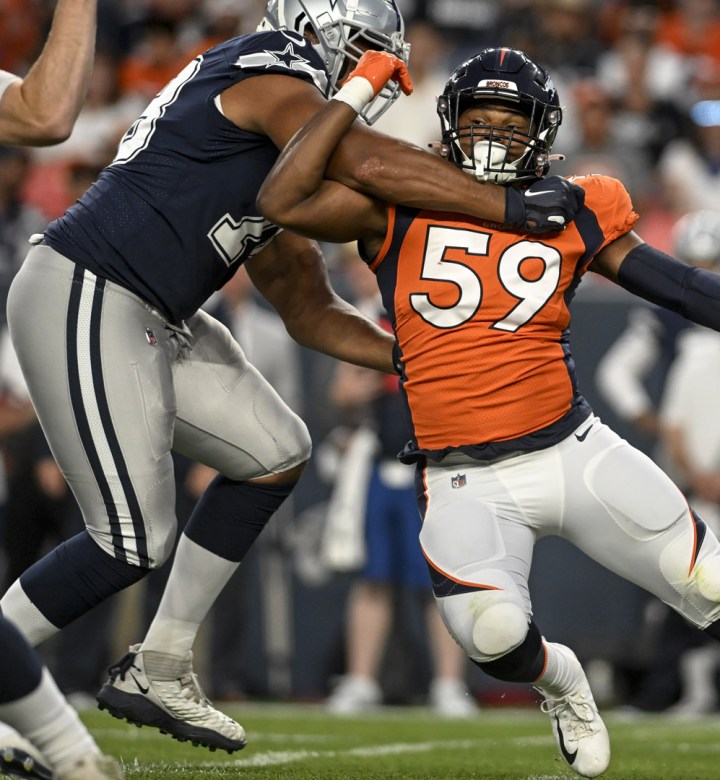 Surprised to see an edge rusher on our list of which NFL players will be cut or traded? Malik Reed has started in 34 games and tallied 15 sacks, 123 tackles, 15 tackles for loss, and 30 quarterback hits. However, Brandon Browning seems to be the future outside linebacker in Denver, Bradley Chubb, and Randy Gregory aren’t going anywhere and rookie Nick Bonitto looks like a player.

With that said, if Reed is cut he will have no shortage of teams calling. Talented edge rushers don’t stay unemployed for long.

Update: Reed was traded to the Pittsburgh Steelers, swapping a 2023 sixth-round pick for the edge rusher and a seventh-round pick.

Malik Reed spoke to the media about joining the team + more. pic.twitter.com/QWMXSv0RVY