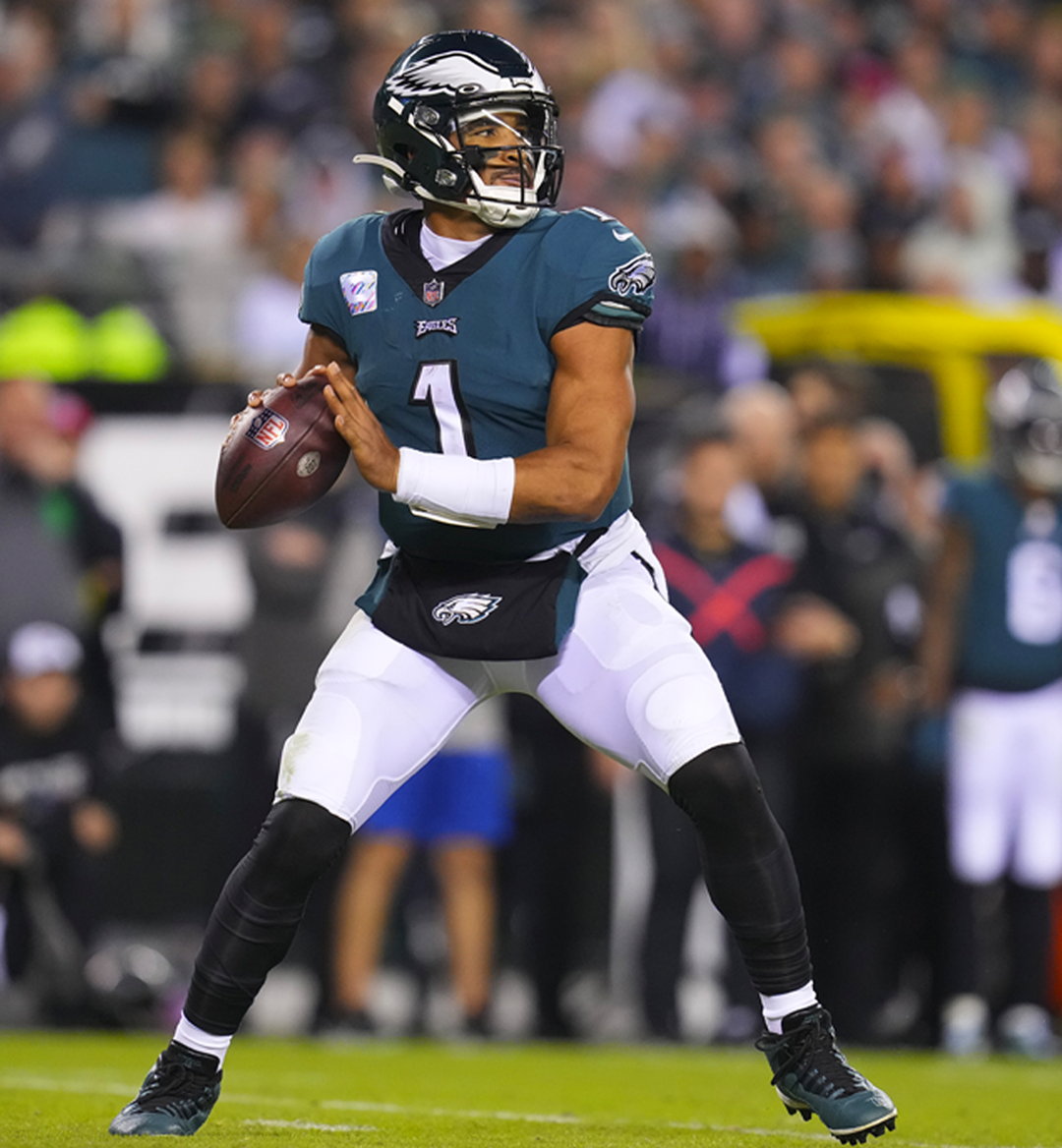 League-wide, this season has been an offensive regression for the ages—the primetime games are almost uniformly defensive slugfests; fantasy scoring is down 22 percent from last year. This season has felt uniquely difficult to understand because it's bucking the offensive-friendly trends that have defined the last few years. Outside of the NFL's upper echelon, are any good teams? Luckily, we're here to help you sort through the mess. These are the 100% accurate Week 7 NFL Power Rankings.

Going into the Eagles’ Sunday Night Football clash against the Cowboys, Dallas defensive end Demarcus Lawrence tried to quelch some of the Jalen Hurts hype, saying that “he hasn't played the Cowboys yet, so we don't know how good he is.” Turns out, he’s pretty damn good. In Philly’s 26-17 dissection of the Cowboys, Hurts became the first quarterback to post a 100+ passer rating against the Cowboys, throwing for 155 yards and two scores and adding another 27 yards on the ground.

After outdueling Patrick Mahomes, Josh Allen established that he’s the best quarterback in the league. Throwing for 329 yards and three tuddies against the Chiefs on Sunday, Allen propelled the Bills to a thrilling 23-20 victory in Arrowhead Stadium, signaling a potential shift of power in the AFC. If their NFL-best +95 point differential wasn’t proof enough, the Bills’ road win against Kansas City demonstrated why they’re the clear favorite in the AFC.

Entering their Week 7 bye week, the Vikings have shown admirable amount of resolve and toughness—their 24-16 win against the Dolphins in Week 6 is the latest in a four game streak of one-possession wins. Sure, the Vikings haven’t looked particularly convincing outside of their resounding Week 1 win against the Packers, but they’ve avoided the slip-ups and brain farts that have befallen other contenders and their sole loss came against the undefeated Eagles.

Brian Daboll may look like Darth Vader when Luke takes his helmet off at the end of Return of the Jedi, but he can coach. Through six games, the former Bills offensive coordinator has authored one of the most impressive rookie coaching campaigns in recent history, completely turning around a moribund Giants franchise. While it’s been easy to doubt the realness of the Giants’ hot start, their rousing 24-20 comeback win against the Baltimore Ravens proved that the G-Men, against all odds and better logic, are a legitimately good team.

Although there’s no shame at all in losing a close game to the Bills, it still chipped away a little bit at the Chiefs’ general aura of invincibility. Still, years of deep playoff runs and continued success have positioned the Chiefs as the successor to the Brady-Belichick Patriots. Alongside the Bills, the Chiefs are the obvious class of the AFC. If there’s a fair and just God, the Chiefs and Bills will play in the AFC Championship Game for years to come.

Across their first six games, the Ravens have done just about everything perfectly except lose three of them. Against the Giants, the Ravens once again blew a late double-digit lead, coughing up a 20-10 lead in the fourth quarter to lose 24-20. Despite his heroics throughout the early portion of the season, superstar quarterback Lamar Jackson laid an uncharacteristic egg, turning the ball over on Baltimore’s final two drives and gifting the win to the Giants in the process.

For the first time since Rex Ryan got a goddamn snack, the Jets’ vibes are immaculate. Whereas the Jets’ first two wins came against struggling teams, they’ve dismantled playoff hopefuls in back-to-back weeks. Over the last two weeks, the Jets have beaten the Dolphins and Packers by a combined score of 67-27. In their comprehensive 27-10 upset in Green Bay, the Jets played dominant football, despite quarterback Zach Wilson struggling to shake off the rust in his second game back from injury. Rookie running back Breece Hall and cornerback Sauce Gardner look like no-doubt superstars already. Too, their defensive line has amassed 50 quarterback hits, the third most in the NFL.

The bad news: the Cowboys’ paltry offensive showing in their loss to the Eagles showed that Cooper Rush isn’t actually starting quarterback material. The good news: he won’t have to be for much longer. Once Dak Prescott makes his debut next week, the Cowboys can hang with any team in the NFL.

Winners of three straight, the Bengals have overcome the bad voodoo of their 0-3 start to the year. The next step is figuring out how to relocate to New Orleans permanently. Dating back to their time at LSU, Joe Burrow and Ja’Marr Chase go supernova whenever they step foot in the Caesars SuperDome. On Sunday, Burrow and Chase each put together their best game of the season and connected for the game-winning touchdown in Cincy’s 30-26 triumph over the Saints.

Just when it seems like the 9ers had begun to make good on their Super Bowl potential, they deliver a total clunker. Accordingly, their 28-14 loss to the Atlanta Falcons is one of the season's most confounding results. On paper, the 9ers roster is still among the NFL’s absolute best, but they’ve once again been decimated by injuries. Of the team's 22 opening day starters, 11 are currently on the IR.

“I ain’t worried,” cornerback Jaire Alexander said after the team’s Week 5 loss to the Giants, “but if we lose next week [to the Jets] then I’ll be worried.” Hahahahahaha

It was their bye week.

I can’t believe Tom Brady is getting divorced for this shit.

The Colts aren’t an especially good team—and that’s fine because there are basically no good teams this year. In their second game against the Jaguars this year, the Colts squeaked out a 34-27 win, avenging their Week 2 24-0 shutout loss in Jacksonville. Thankfully, quarterback Matt Ryan looked like Matty Ice again—his team-carrying 389 yard, three touchdown performance in Week 6 is by far his best performance with his new team.

The Rams are still not even close to last year’ Super Bowl winning outfit, but their 24-10 domination of the wayward Panthers is a step in the right direction. Most encouraging, wide receiver Allen Robinson, the team’s marquee offseason addition, looked comfortable in LA for the first time this season—he caught five passes for 63 yards and a touchdown on Sunday, a marked improvement from the five catches and and 19 yards he tallied over the last two weeks combined.

Bailey Zappe is off to the best start of any rookie in NFL history. With a 309 yard, two touchdown masterpiece against the Browns, Zappe became the first quarterback ever to win his first two starts with a passer rating over 100 in each game.

Just imagine how good they could be if they gave the ball to their best player!

In their 19-9 win over the Arizona Cardinals, the Seahawks delivered a disappointingly boring, well-played defensive battle instead of the Redzone friendly pyrotechnics that we know and love from them.

Mercifully, Tua Tagovailoa returns next week to break the Dolphins out of their three game skid. Nevertheless, it’s probably a bad sign if you’re hoping that Tua Tagovailoa might save your season.

Two weeks ago, the Jags were the darlings of the NFL blogsophere—Trevor Lawrence looked good! They beat the crud out of the Chargers! Their DVOA was second in the whole league! Now, they’re back to just being the Jaguars.

You cannot kill Mitch Trubisky. Relegated to the bench in favor of tiny-fingered wunderkind Kenny Pickett, the Trub Miester (I just made that nickname up, I bet it has legs) rose from the ashes to rally the Steelers to a 20-18 upset of the Buccaneers.

I honestly couldn’t tell you a single thing about this team and it’s my job.

You can’t lose when you don’t play!

The combo of winning their first game of the year and firing GM Jack Easterbay, the huckster self-help guru/football idiot, means that this was probably the greatest weekend in Texans history.

Losers of three straight, the Browns reached their nadir with a 38-15 ass-whopping at the hands of Bailey Zappe and the Pats. Even with the expanded playoff format, the Browns look like they’ll be too far out of the running by the time serial sex criminal Deshaun Watson returns from his 11 game suspension.

Call of Duty: Modern Warfare 2 comes out this week, so the Cardinals season is basically over as far as Kyler Murray is concerned.

Carson Wentz is out for a month, which is a bad thing but also a very good thing.

Every Chicago Bears television broadcast should be deemed an EPA Superfund site. I still feel unclean after watching their 12-7 loss to the Commanders on Thursday.

The Panthers impending yard sale of their remaining good players is so obvious and so anticipated that GaryVee will somehow end up trading for DJ Moore and Christian McCaffrey.