Which Schools Have Given Bronny James Offers? 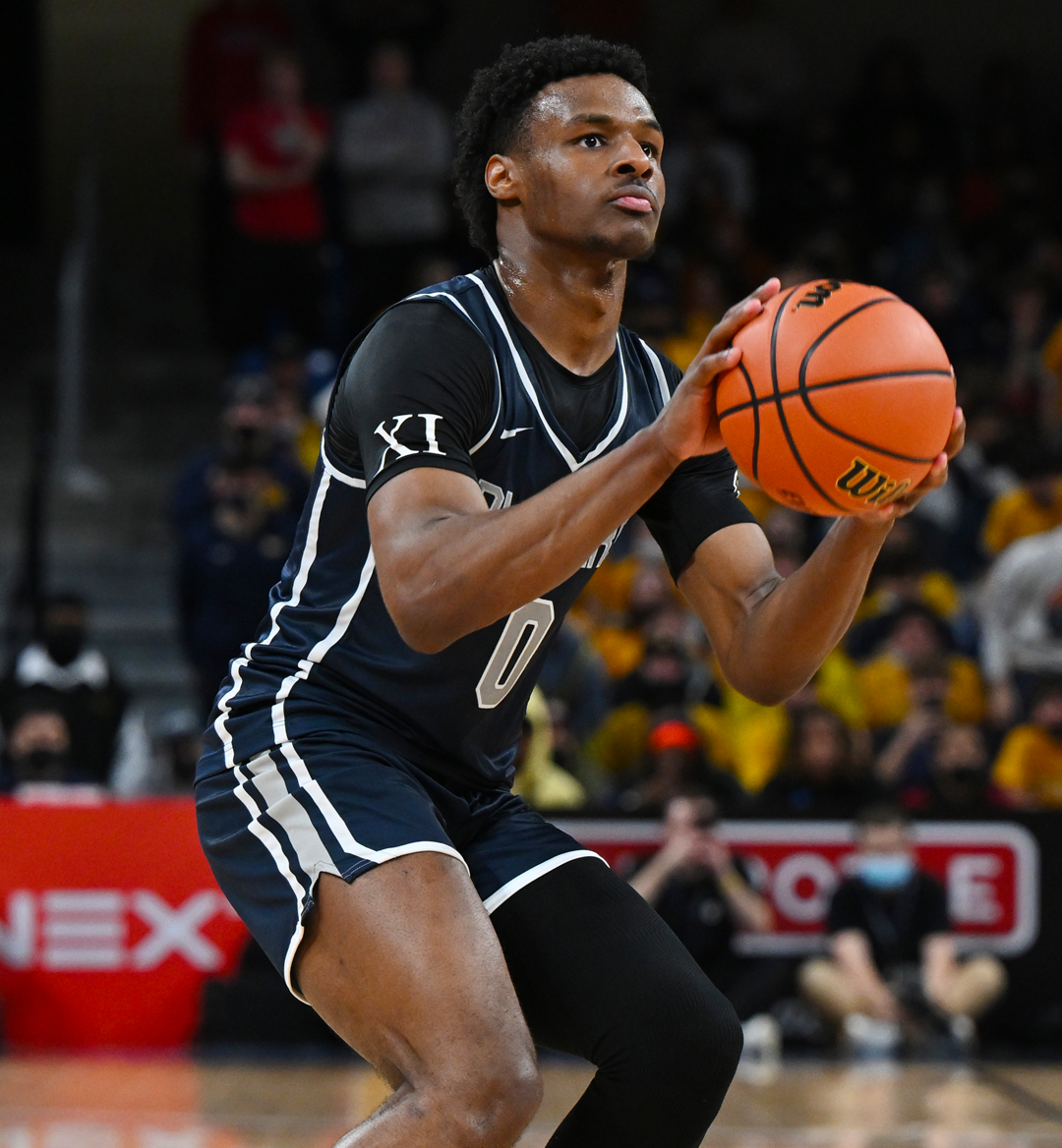 Bronny James is the most famous teenage athlete in the world. In fact, outside of Charli D’Amelio and King Tut, he might be the most famous teenager in the history of the world. As a consensus top 50 recruit, Bronny James would be the subject of speculation and intrigue purely on the merits of his basketballing talent; schools would be lining up to make Bronny James offers no matter his parentage as the son of Savannah James, Bronny has spawned an online bacchanal of hype and pack-smoking before he’s even begun his senior year of high school. In his final tour of duty on the AAU circuit, James put together the best summer of his short career, cementing his status as one of the best shooters in his high school class.

Following his breakout AAU performance,  James barnstormed through Europe, playing games in London, Paris and Rome with the California Basketball Club, a showcase team built around a spine of fellow NBA scions; Ashton Hardaway (son of Penny) and Justin Pippen (son of Scotty) joined James on the CBC. Most intriguing, Bronny James suited up for the first time with his younger brother Bryce, a rising sophomore who will also suit up with Bronny this season at Sierra Canyon.

While James doesn’t inspire the same ekphrasis and hyperbole that his dad did as a recruit, he’s still a legitimately good player with real NBA potential independent of his family name. As such, big-time college basketball teams are in hot pursuit—unlike Marcus and Jeffrey Jordan, Bronny is a sharp enough hooper to justify the hoopla. As Bronny James enters his final year of high school and his recruitment heats up, here are the programs lining up to give Bronny James offers.

REPORT: Bronny James is “eyeing” a visit to Ohio State for the season opener against Notre Dame.

Since Bronny James is Just A Kid From Akron (Who Moved To Miami And Then Back to Akron But Now Lives In Los Angeles), it’s easy to speculate that he could make a return to his fatherland. Although basketball primarily rides shotgun to football at Ohio State, the Buckeyes have established themselves as one of the top programs in the Big Ten, qualifying for 11 of the last 13 NCAA Tournaments. But more than their consistent goodness (and occasional greatness), Ohio State has a personal connection with Lebron James that no other school can boast. Famously, James has said that he would’ve been a Buckeye if he hadn’t jumped straight to the NBA from high school. What’s more, OSU is the only school under the Lebron James imprimatur at Nike and even sells #23 James jerseys, despite never actually rostering a James who worse #23.

On the court, Ohio State has amassed a four man recruiting class for 2023 that ranks among the country’s best, headlined by five-star small forward Scotty Middleton, but still needs a point guard, which would potentially give James an avenue to immediate playing time. By being one of the major contenders to make Bronny James offers, the Buckeyes could make sure that the son of the One Who Got Away doesn’t follow in his dad’s footsteps.

Former Michigan star @JalenRose made his pitch for Bronny James to play for the Wolverines〽️https://t.co/c925HDwyrV pic.twitter.com/oQ0BppWv6r

Lebron James might have grown up an Ohio State fan, but that hasn’t stopped That School Up North from trying to woo his son. Crucially, Michigan has ties to Lebron that potentially cut even deeper than Ohio State does; Juwaun Howard, Lebron’s close friend and former teammate with the Miami Heat, has coached the Wolverines since 2019.

Under Howard, Michigan has picked up its recruiting to the point that their last few classes have rivaled just about anybody’s in the country; headlined by star players such as Hunter Dickinson, Caleb Houstan, Moussa Diabate and Jett Howard (Juwaun’s son), the Wolverines have pieced together a top 15 class in each of the last three seasons. Being a Big Ten team, Michigan naturally doesn’t play the most invigorating brand of basketball, but Bronny’s heady play and ability to thrive within a regimented system and role would allow him to shine there all the same.

A new expert prediction shows that the Oregon Ducks are the favorites to land a commitment from 4-star Bronny James. https://t.co/Xxp3H40tLu

There’s one commonality amongst all the schools with serious outstanding Bronny James offers: they’re all Nike schools—and there’s no bigger Nike school than Oregon. Even before NIL empowered a fresh wave of mega-boosters, Nike founder Phil Knight pumped rafts of cash into his alma mater; over the last few decades, Knight has donated nearly $2 billion to the university. As Nike’s proxy college team, the Ducks have the unique advantage of being able to capitalize on the ongoing decades-long, billion-dollar business relationship that they have with Bronny’s father. To wit, Bronny wouldn’t even be the only future Duck who has gone by the name Lebron James. Mookie Cook, a five-star wing committed to Oregon, will play a young Lebron James in an upcoming biopic that’ll premiere on Peacock in 2023.

Beyond all the obvious outside business interests, Bronny is a seamless on-court fit in head coach Dana Altman's system. A versatile, switchable 6’2 point guard, Bronny James is exactly the kind of switchable athlete that Oregon prizes. Even if Bronny James isn’t a one-man offense like his father, he has all the tools to succeed in Eugene, nailing jumpers and attacking gaps against extenuated defenses on offense and holding his own against bigger players on defense.

Where Will Bronny James Play After High School? 🏀

After years in the wilderness, UCLA is back. Under head coach Mick Cronin, UCLA has reasserted itself as the west coast’s most glamorous basketball program, backing up 2021’s miraculous Cinderella run with a top ten finish in 2022. During this renaissance, UCLA has leaned on the strength of their gritty upperclassmen, but they’ve also been able to augment their blue collar core with blue chip talent. Over the last two years, Cronin and the Bruins landed Peyton Watson in 2021 and then Amari Bailey and Adem Bona in 2022, giving UCLA their first five-star recruits since Lonzo Ball in 2016.

Of all the teams who are rumored to have given Bronny James offers, UCLA is the best situated to truly contend for a title during Bronny’s year on campus. Aside from the fact that he could pop home on the weekends to get his laundry done or that UCLA is the newest member of the Jordan Brand sponsor portfolio, Bronny could be drawn to UCLA for the same reason anybody else would be: being a young famous person in LA seems awesome.