A Guide to Bauhaus Interior Design 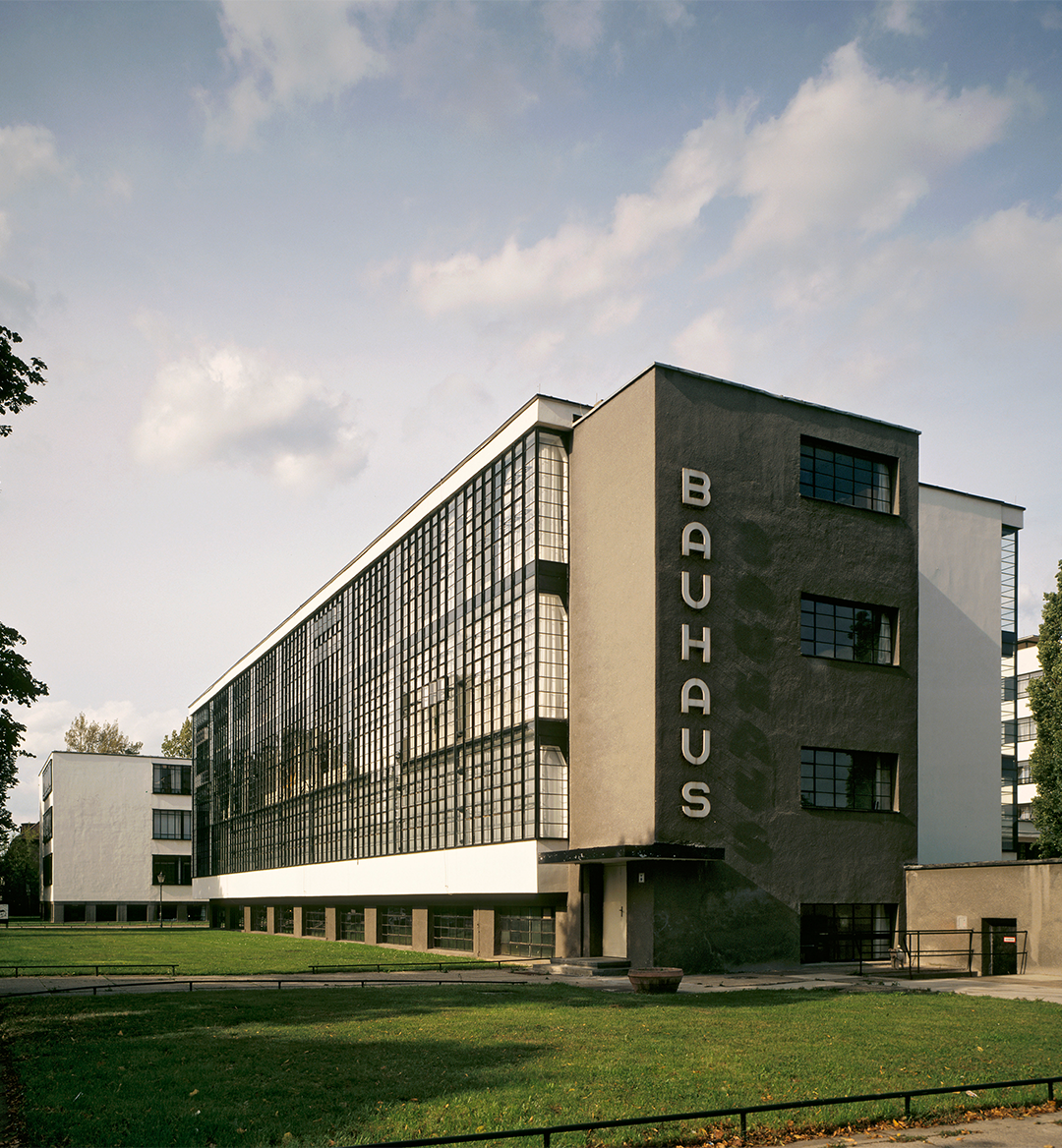 Often, design is reduced simply to its aesthetic or utilitarian components, but good design is not only functional and beautiful. Design, at large, is a field brimming with innovation and forward thinking people who continue to change how we view and interact with the world as a society. Good design has the capability to change the world, which is exactly what the Bauhaus movement—and Bauhaus interior design—aspired to do.

What is the Bauhaus?

The Bauhaus was a radical expansion of what a design school should be. Teachers and students were freely able to experiment in any freedom they pleased, from painting and sculpture to architecture and product design. While the Bauhaus was beset by its turbulent history and only lasted for a short period of time (1919-1933), the Bauhaus left an enduring mark on art and design that lives on today. 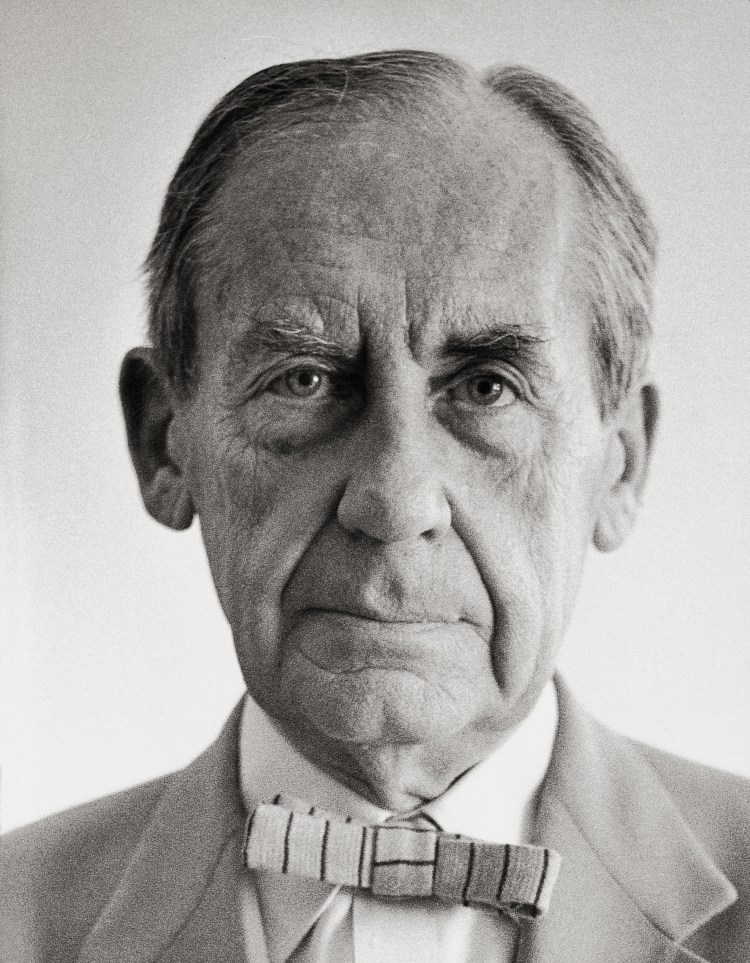 The Bauhaus was established by an architect, Walter Gropius, to create unity through art and design in the aftermath of the First World War. Gropius himself said "Together let us desire, conceive and create the new structure of the future." In order to create the future, Gropius looked back into the past, to examples like William Morris and John Ruskin, who upheld craftsmanship during the Industrial Revolution. Similarly, Gropius believed there needed to be a radical response through art and design to cope with the damage of the First World War. Gropius maneuvered his way into the position of director at Weimar's School of Arts and Crafts, and persuaded the authorities to merge the school with the city's Academy of Fine Arts. Thus, the Staatliches Bauhaus Weimar, was opened in April of 1919.

The name derives from Bauhütte, which were medieval lodges that congregated architects, craftsmen, and sculptors to come together in guilds. Gropius's mission was obviously an extension of that into the 20th century, speaking directly to the hopes and dreams of young people with a vision of creative unity. One of the founding principles of the school was the idea of Gesamtkunstwerk, or comprehensive artwork, which would bring together all of the arts.

Gropius's mission and manifesto for the Bauhaus struck a chord in the hearts of many, attracting international icons like Wassily Kandinsky and Paul Klee as some of the school's first teachers. Later on, students like Gunta Stölzl and Marcel Breuer would become legends in their own right.

Gropius developed an innovative preliminary course for the Bauhaus known as Vorkurs, which was compulsory for all students before they joined a workshop. Traditionally, students were required to copy old masters and draw from life, with the students' personality making very little impact on their education. The Bauhaus's first teacher, Johannes Itten, sought to "unleash the creative powers of the learners." Lessons catered and tended to the individual needs and talents of each student, allowing them to flourish and create work free from convention.

Over time, the nature of the Vorkurs changed under each succeeding teacher. László Moholy-Nagy and Josef Albers reduced the degree of subjectivity in the curriculum, instead prioritizing technology and machinery over the handmade, and familiarizing the students' with materials. Eventually, under Ludwig Mies van der Rohe, the Vorkurs was no longer compulsory, as the Bauhaus had to shift gears towards a more conventional manner of teaching due to financial and political pressure from the rising Nazi Party.

Ultimately, the trajectory of the Vorkurs happened on a macro scale to the entire Bauhaus, which changed leadership and location twice before it was closed due to the Nazi regime, who characterized the Bauhaus as a center point for communist intellectualism.

What are the main elements of Bauhaus interior design?

While the Bauhaus made significant marks on the worlds of architecture, art, and graphic design which are not to be understated, the Bauhaus is most commonly associated with its innovations in interior design. Bauhaus designers pioneered new material applications, for example, Marcel Breuer's newfound use of steel tubing and plywood left an indelible mark on furniture design as we know it today.

Most notably, however, are the iconic blue circle, red square, and yellow triangle, which are inseparably tied to the image of the Bauhaus. The colors were assigned to each shape by Wassily Kandinsky, who argued that "internal necessity" denoted each shape's color. The softness of the blue circle represented femininity, while the square is active, red, and masculine. Naturally, the acute angles of the triangle make it yellow. Interestingly, there have been scientific studies of correlation between these naturally biased associations between shape and color, which later found Kandinsky's findings to be partly confirmed. Regardless, the circle, square, and triangle found themselves in classics like Peter Keler's Bauhaus Cradle, and were common motifs in the works of many other Bauhaus designers. 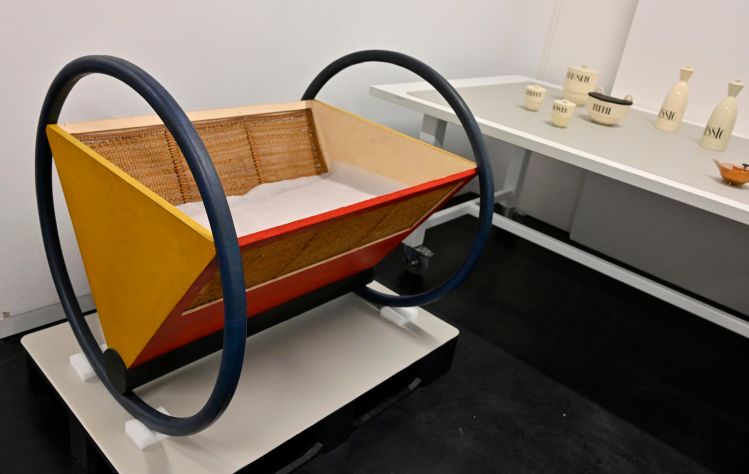 Overall, the Bauhaus championed a very minimal design aesthetic, making use of the aforementioned basic shapes in various combinations to create form with very little decor and ornamentation. Bauhaus designs typically defaulted to clean lines and simple materials, like steel, wood, and natural textiles. Interestingly, many of the characteristics of Bauhaus design were a mimicry of the mass produced objects of the time, but were hand crafted to look machine made. This clash between craft and mass production is paramount to the Bauhaus ethos, and is more of a common thread throughout than any particular visual cue.

Interestingly, many Bauhaus designs lent themselves well to mass production since they were constructed in a way that looked mass produced. The clean lines and simple materials were ideal for large scale manufacture, and in the later years of the Bauhaus the school focused more on economic output as well as artistic exploration.

How to recognize Bauhaus interior design:

It's easy to be reductive and call Bauhaus design minimalist, but this description often implies that aesthetics and form supersede function and utility. The Bauhaus may have set the precedent for minimalism, but the "less is more" mentality promoted by Ludwig Mies van der Rohe was rooted in the celebration of craftspeople and material.

To that end, material was often considered ornamentation in and of itself. Extravagant carvings, gildings, and other design elements were deemed frivolous. A change in texture, from glossy to matte, or change in material did just enough to provide an object with the character it needed. Bauhaus designers also believed in a philosophy of honesty in relating to material, choosing to highlight the material and its construction methods rather than to hide them from the user.

These core tenets of Bauhaus design are what made the school so impactful, even today. Material use was intentional and calculated, keeping designs interesting without compromising function whatsoever.

There are no shortage of iconic designers and objects to come out of the Bauhaus, so it can be difficult to compile them concisely. However, we've done our best to create an assortment of "greatest hits," which many of you will undoubtedly recognize. While browsing, it is important to note that anything that feels familiar or possibly played out now was a fresh idea that likely originated with the Bauhaus, or even a specific object. 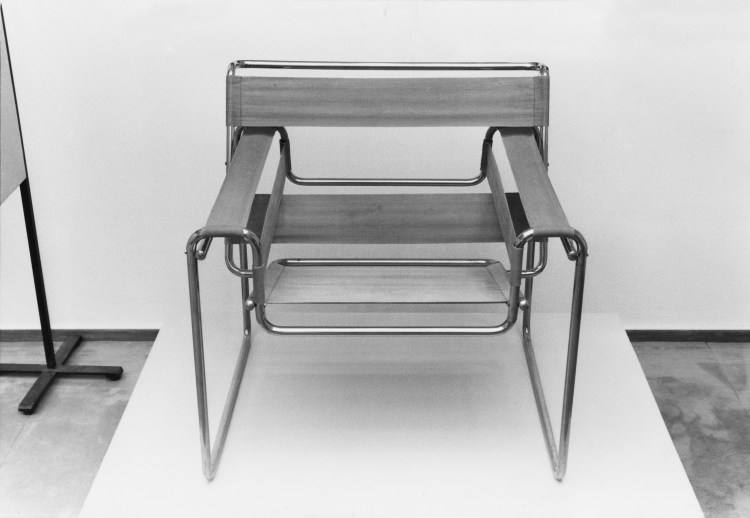 Marcel Breuer's B3 chair, known now as the Wassily Chair, is arguably the most famous object to come out of the Bauhaus. This transformation of the club armchair is a modernist icon, and is one of the 20th century's most recognizable designs.

The chair was later dubbed the Wassily Chair, reflecting Wassily Kandinsky's admiration for the design. In fact, the artist loved the chair so much that Breuer built him a personal version.

Breuer was inspired by the steel tubing he saw on his bicycle's handlebars, making use of bent steel tubing, a new technology at the time. Unlike its predecessors, the Wassily Chair is lightweight, limiting the amount of cloth to only the most necessary areas, revealing the chair's framework beneath. The design was also reflective of the new Bauhaus buildings, which his furniture would later populate.

Despite the Wassily Chair's mechanical look, it still needed to be constructed by hand, emblematic of the ethos of the Bauhaus. Eventually, Knoll acquired the right to the production of the chair in 1968 and continues to sell it to this day as it remains an iconic example of Bauhaus interior design. 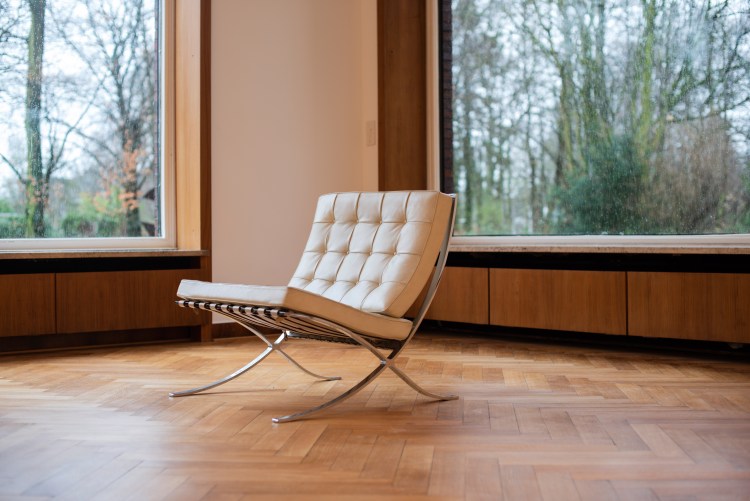 The Barcelona Chair was designed collaboratively by Ludwig Mies van der Rohe and Lilly Reich for the International Exposition of 1929, hosted in Barcleona, Spain.

Interestingly, the Barcelona Chair is somewhat of a contradiction to the majority of Bauhaus design. Where much of the Bauhaus's output centered around the "common man," the Barcelona Chair was expressly designed as a luxury object for the Spanish Royalty to oversee the opening ceremonies of the exhibition.

The design is purportedly inspired by the Roman Curule Chair, which featured similar curved, intertwining legs. The design has also been acquired and produced by Knoll, who have claimed that the chair requires much hand craftsmanship despite its sleek appearance—notice a trend here? 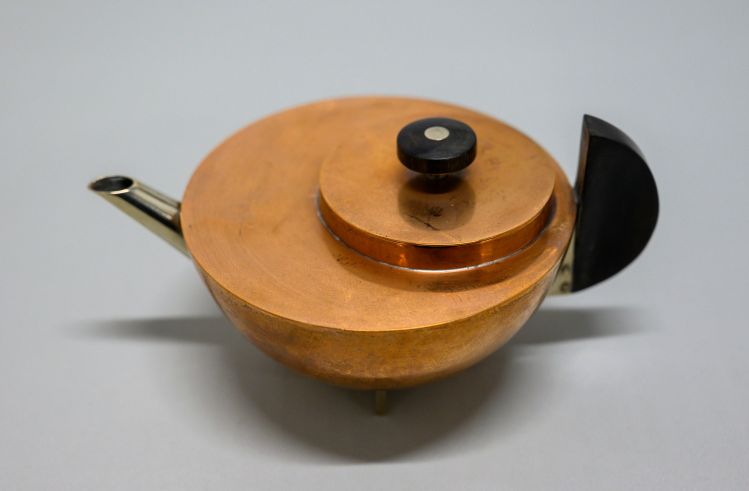 Women's roles in the Bauhaus have chronically been undermined, however some of the most striking works to come out of the school were created by women like Marianne Brandt, whose 1924 Tea Infuser sold for $361,000 in 2007.

The Tea Infuser, standing at just 3 inches high, distilled a concentrated extract which was then mixed with boiling water to create a tea of any desired strength, unlike a conventional teapot. True to Bauhaus fashion, the Tea Infuser defaults to variations of round and square abstract shapes, each sophisticatedly arranged to fit the function of the object. 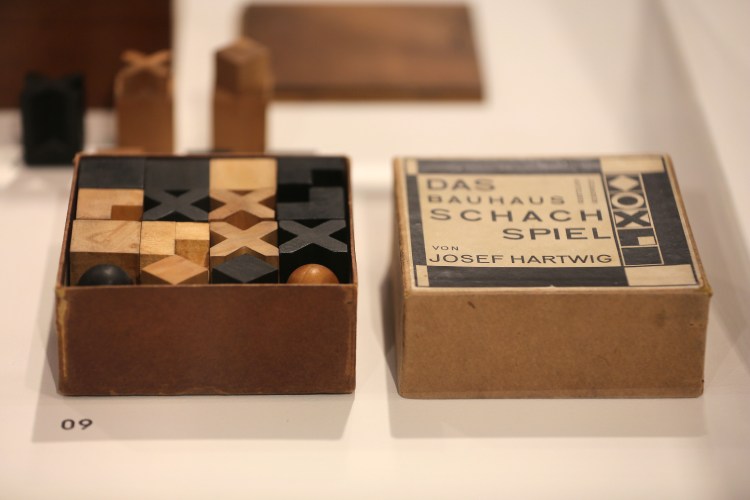 A humble chess set may not be the first thing one thinks of when it comes to design iconography, but Josef Hartwig's 1924 chess set embodies everything the Bauhaus stood for. Chess is an age old game of battle, but Hartwig argued that "the contemporary meaning of playing chess compels us to an abstract design of the game pieces."

Hartwig rethought the chess set entirely. His chess set was not simply abstracted, but each piece was sized according to its importance in the game, and also given a shape determined by its movement in the game. For example, the knight is given an L-shape, and the Bishop an X. The cubic shape of the rook reflects its ability to move vertically and horizontally across the board.

The entire chess set fits snugly into a cardboard box, which was designed by student Joost Schmidt. It has been a constant favorite and has been in production by Naef since 1981. 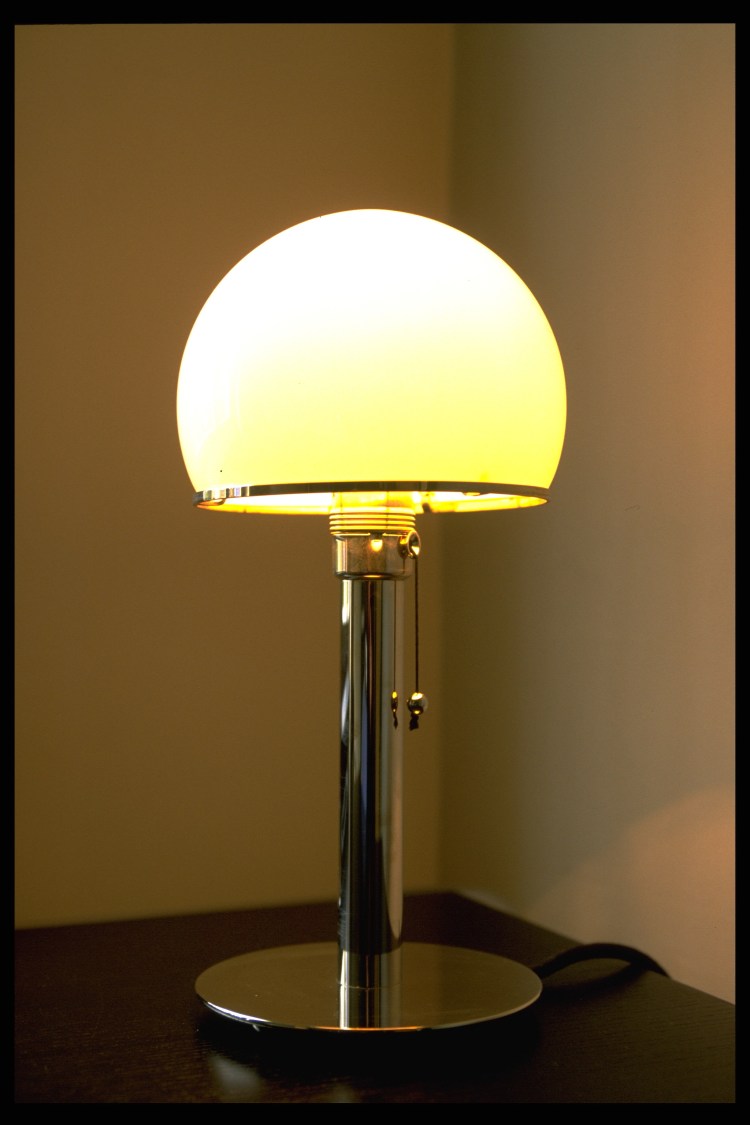 Known colloquially as the Bauhaus Lamp, this Bauhaus classic was designed by Wilhelm Wagenfeld circa 1923-1924. The name can refer to either the MT8 or MT9 model, which featured a metal stem and base, or a glass stem and base, respectively.

Both designs expertly incorporate core Bauhaus principles, bringing industrial materials like glass and metal into the home, while celebrating the round and cylindrical shapes typical of the Bauhaus. Nearly every form on the lamp is spherical or round in some way, with the pull switches even ending in small spheres.

Wagenfeld wrote that the lamp represented what would become essential qualities in the foundation of Bauhaus design: "the greatest economy in its use of time and materials" and "the greatest simplicity in its form." Ironically, the lamp was an extremely labor intensive craft object, which resulted in Wagenfeld being laughed at in Leipzig as it looked as if it could be made inexpensively by machines.

Wagenfeld's designs coincided with the experiments of Carl Jacob Jucker, another designer. In the decades that followed the lamp's release, Jucker created a modified version at some point before 1960, while Wagenfeld edited his design in 1931 and again in 1980. Both designers' editions of the lamp were sold, but in 2005, the court decided that the Bauhaus lamp belonged to Wagenfeld.