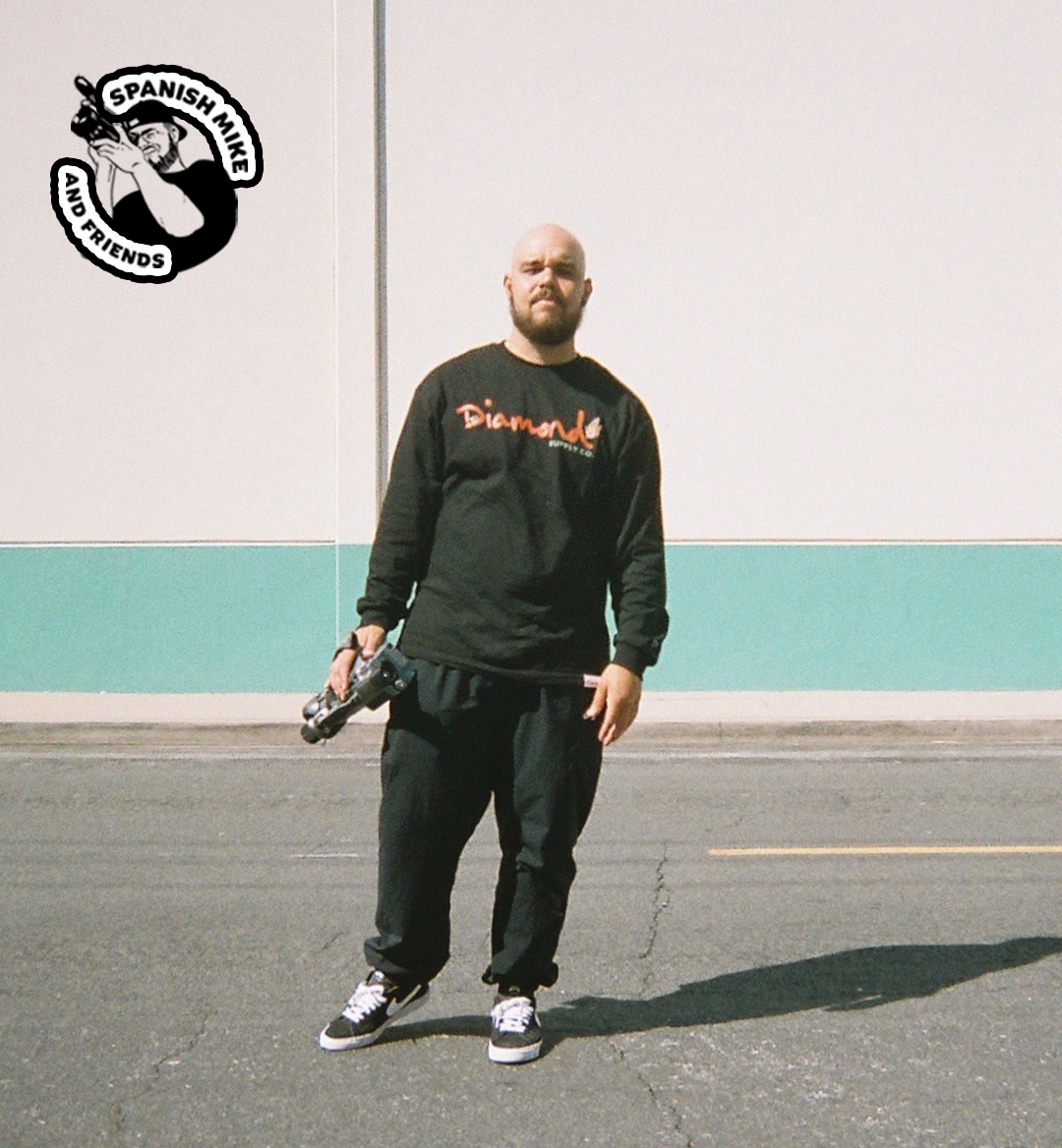 "My favorite thing about what I do is it doesn't feel like work. It just feels like one big vacation," Spanish Mike tells me. We're speaking over the phone, but I can hear the smile in his voice as he says it.

Michael Cusanelli aka Spanish Mike is a skate videographer from Long Island who's been working out of LA now for over a decade. He's a go-to videographer for names like Paul Rodriguez, Manny Santiago and more, and one of the most charismatic and kind people you'll ever meet in your life.

Today, we get to launch our new video series helmed by the man himself: Spanish Mike and Friends. Mike's vast network of pro skater friends in LA is such easy fodder for a show, giving viewers some insight into the day to day life of a pro. The very first episode features Mike spending the day with legendary pro-skater Torey Pudwill as they chat about his latest part, hit the gym and scout out some spots.

Who is Spanish Mike?

Raised in Long Island, Mike got his first video camera at the age of 15. "It just kinda sparked this interest in me," he tells me of receiving the camera for his 15th birthday. He grew up skating and consuming videos featuring a lot of the pros who would go on to be his peers and friends in LA. "The first two videos I ever had were Alien Workshop - Photosynthesis and City Stars - Street Cinema. So it was like two different spectrums of skating, in a sense of how videos were filmed," he tells me of his nascent days getting into the world of filming.

"I loved being able to film something and watch it a bunch of times. Just being a kid running around with a video camera at 15. It was just a moment in time for me," he smiles to me. His favorite part growing up is a shared sentiment by a lot of skaters—including Nyjah Huston. "The one that got me, though, I would have to say would be Paul's part in Yeah Right."

Throughout these early days, Spanish was already vlogging on Youtube under a series called SpanishMikeTV. "That's what pretty much got me out here," he tells me of finally moving out to the west coast.

He moved out to LA in 2010, and quickly became friends with P Rod, Felix Arguelles and Manny Santiago. "They mentored me, and one thing led to the next and I just started meeting all my favorite skaters," he recalls with gratitude in each utterance. His first big break came after the move when he worked for Famous Stars and Straps.

"Me and Torey go way back," Spanish tells me of his relationship with the pro skater and subject of the series' first episode. "He's so passionate at what he does. And especially dropping that Bigger Bang part. I know how much he put into it. And I was there for some of the sessions, so seeing him throw his body on the line like that just really shows how much passion he has for skateboarding," he goes on. You can tell throughout the video the relationship the two have with each other. Part of why Spanish is able to shoot such incredible parts (like this and this) is because of his relationship of mutual respect with these skaters.

"I'm excited about this partnership I got with ONE37pm and dropping more episodes, in a sense of showing different aspects of professional skaters. And just bringing skate culture to a different platform than just a skate platform," Mike tells me on his plans for the future. "I'm just trying to push skating the furthest I can possible, in any way, shape or form," he adds.

Watch Episode 1 of Spanish Mike and Friends right now on IG, and keep your eyes on the ONE37pm IG for future episodes.