The 14 Best Duffel Bags For Men 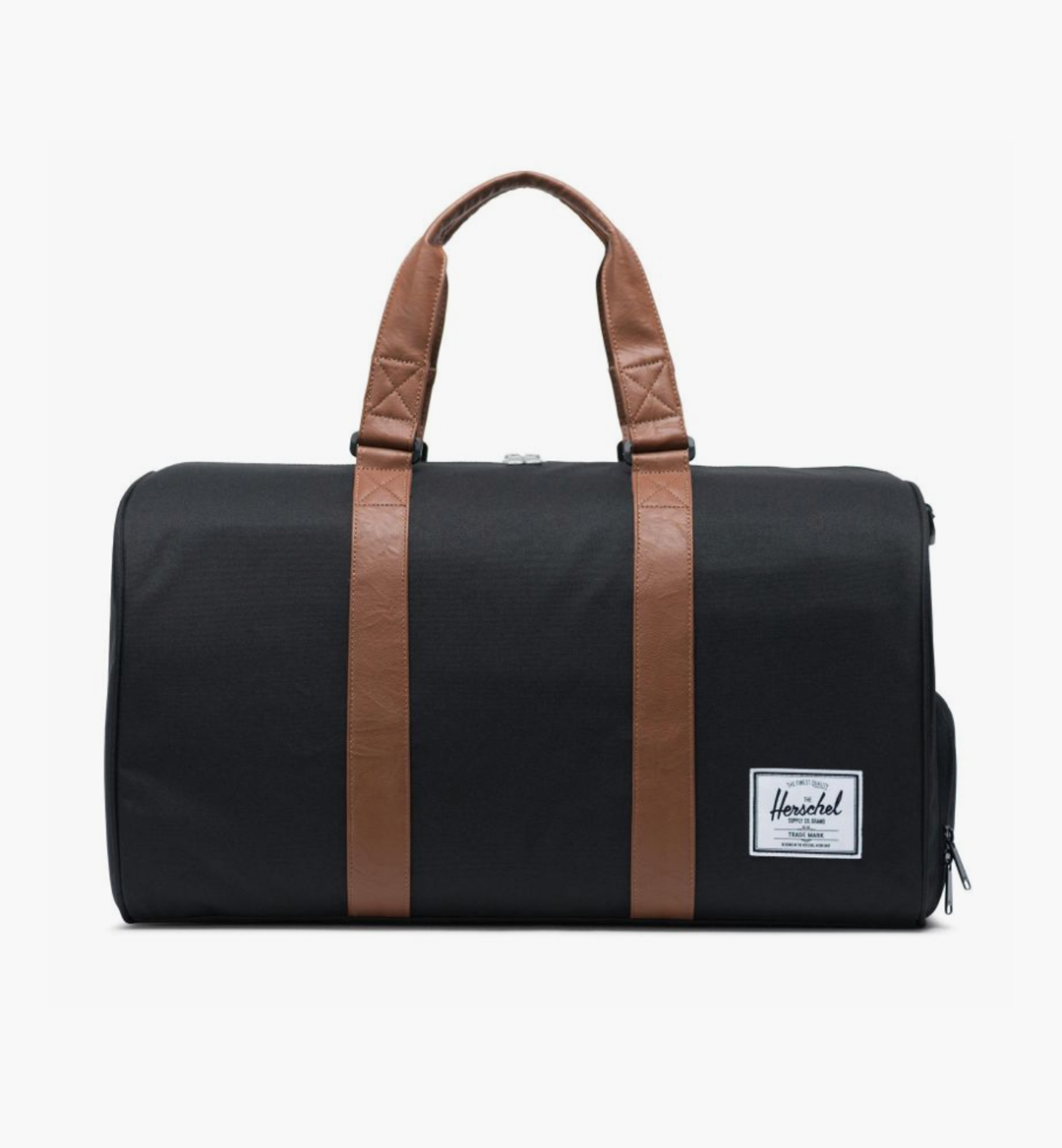 With airlines restrictions on carry-on bags becoming more obscure by the second, a sturdy and reliable duffel bag will likely become a necessary accessory the moment we’re finally in a post-pandemic world. Useful for weekend getaways, trips to the gym or field, or longer-term escapes, mid to large size flexible bags are an absolute necessity.

Historically, duffel bags were mostly used by the military — originally created using coarse woolen cloths, with the name originating from a town in Flanders, Belgium. The earliest duffel bags used rope enclosures and were unbearably heavy when wet. Following World War II the waxed-canvas bags became ubiquitous in Europe and the United States, with non-Army personnel often snagging them as hand-me-downs or in surplus stores. By the 70’s and 80’s, the more cylindrical duffel bags began to be used in civilian settings and started appearing in less drab color palettes and lighter-weight materials, eventually garnering usage by athletes with heavy equipment. In more contemporary settings, these barrel-shaped satchels have become important for both utilitarian functionality and as aesthetic statements.

Making sure you stay stylish while on-the-go is essential. We’ve curated a list of the 14 best duffels we could find on the Internet. 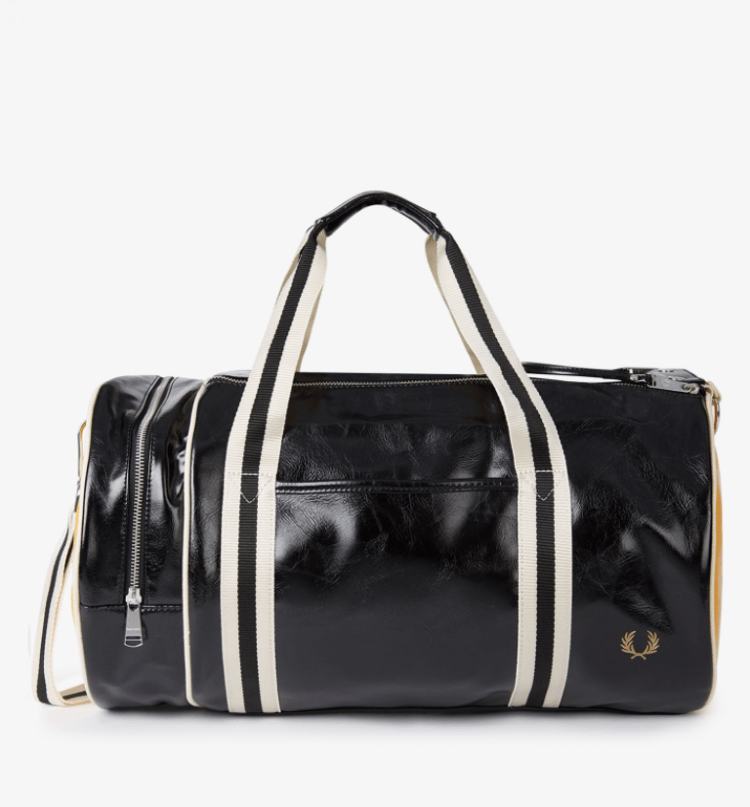 Best Overall: Fred Perry’s barrel bag has a vintage 60’s feel to it. Made with tough PU, a webbing handle, and features a detachable strap, the iconic mod brand pairs perfectly with skinny fit pants and a double-tip polo. The embossed laurel branding exudes poise. Although Perry’s wares were originally designed with tennis in mind, this works as a small carry-on for plane rides as well. 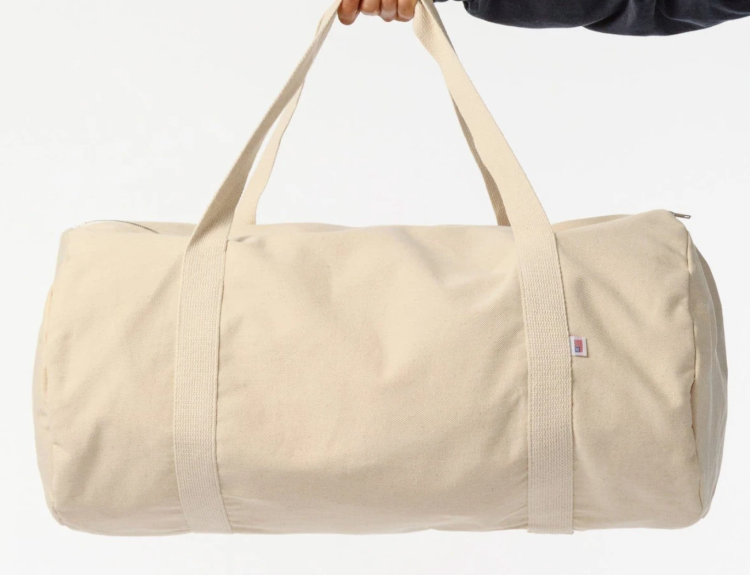 Best for the basics: American Apparel, rebranded as Los Angeles Apparel following some financial struggles, has continued their former incarnation’s thesis by creating totally USA-made products and offering workers fair wages. Their garments are all astoundingly long-lasting, and their bull denim weekender bag is no exception. According to the product description: “Each bag is manufactured and then dyed in batches, giving the thick textile of the bag a weathered texture. These bags can last you a decade and are totally washable. Dyes are extra high quality and will not fade after multiple washes.” 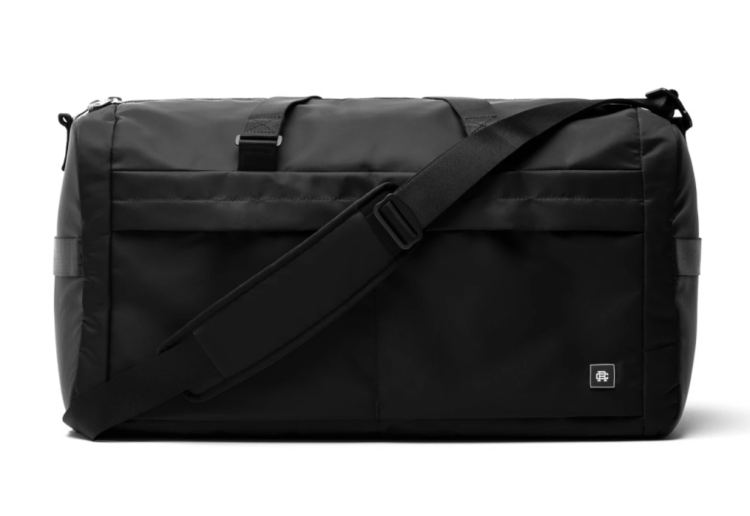 Best constructed: Reigning Champ’s high-end (and high priced) athletic wear is top-notch and worth every penny. The brand’s design aesthetic is notably minimalist. Their signature duffle is made from durable woven nylon and features three different exterior pockets, five interior sleeves, and a soft zip pocket for valuables. The matte black metal detailing shows an attention to detail. 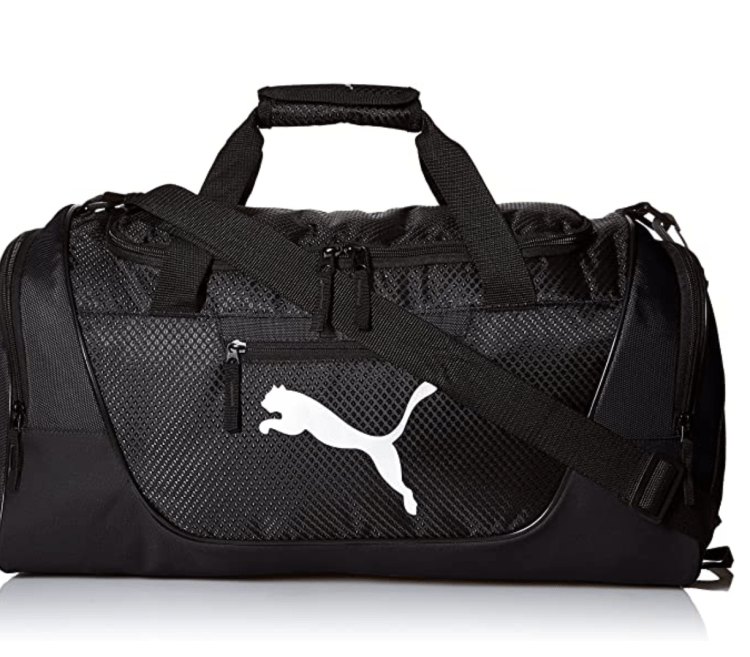 Best for functionality: Puma’s polyester duffel comes with a separate footwear compartment. The roomy interior is perfect for lugging gear to games or as a sturdy piece of transportable luggage. The color palettes available are mostly black, but the bold big cat is an always-fashionable emblem. 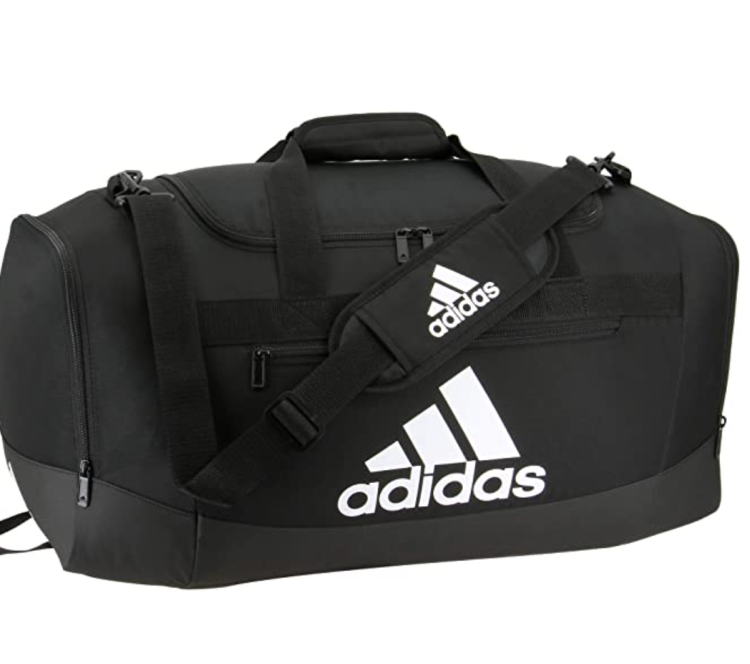 Best For Your buck: At a perfect 26” wide, the black/white color palette is the obvious choice as far as Adidas anything goes — but there’s plenty of options to choose from here, including a neon pink for the especially brave. The emphasis is on functionality with this duffel, which features zip end pockets, a water-resistant base, a roomy interior for your gear and essentials. 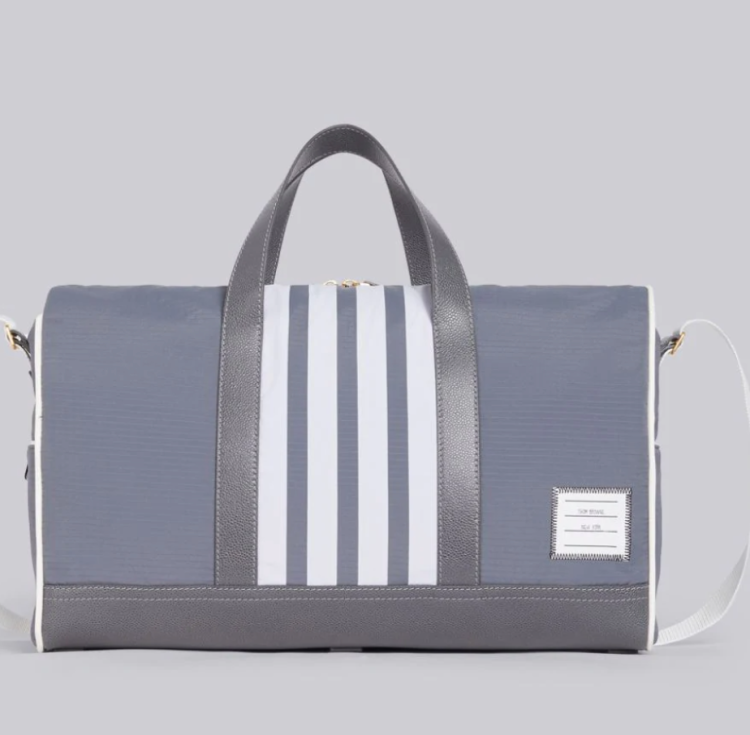 Best flex: While duffel bags, in general, are meant for function more than fashion, Thom Browne is stunting with this ultra-refined gym bag. With pebbled handles and straps, brass zip enclosures, a grosgrain loop tab, and the designer’s signature thick stripes, the modified proportions make this a standout piece at an eye-popping, ultra-lux price. 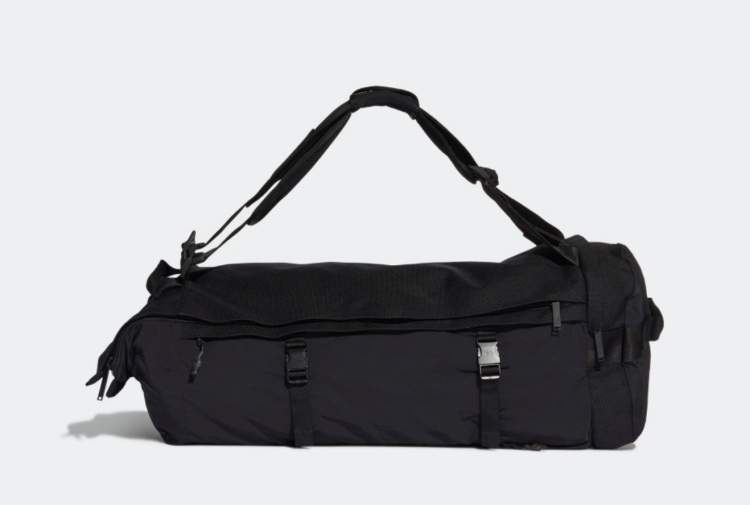 Best for variability: Yohji Yamamoto’s Adidas collab consistently “functionality with sophistication to craft.” This duffel uniquely can be transformed into a backpack and “the durable, water-repellent material adds protection against the elements.” Y-3’s black-on-black logo is a subtle nod to the product’s sophistication. 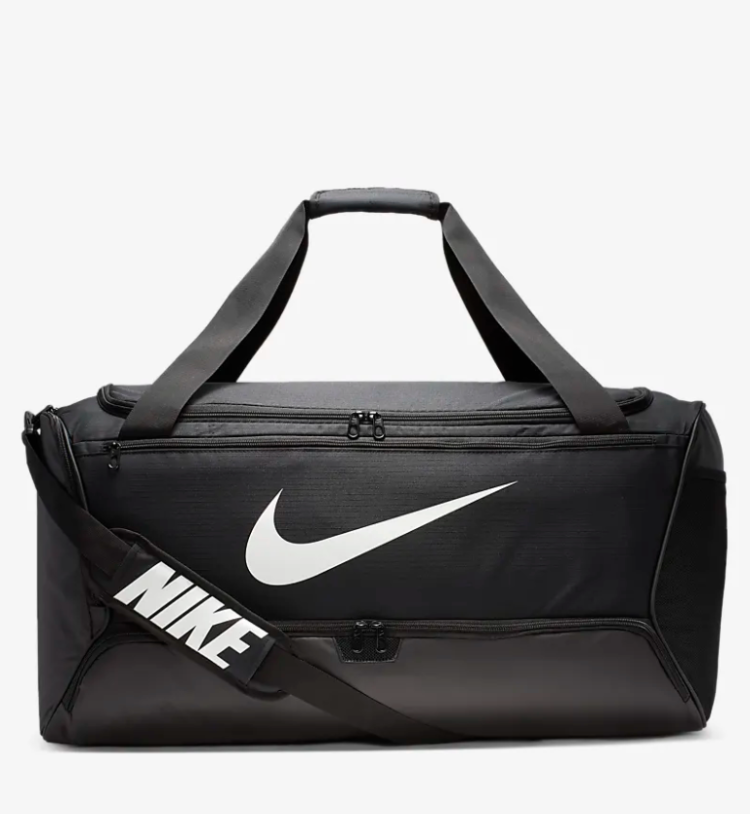 Best for reliability: The square shape on Nike’s 14” wide Brasilia training duffel provides a slightly different silhouette than your average gym bag, but just as much functionality and spaciousness. The pads on the shoulder strap are a necessity for when your gear gets too heavy. When Nike says large, they mean large — so be ready for all the extra room. 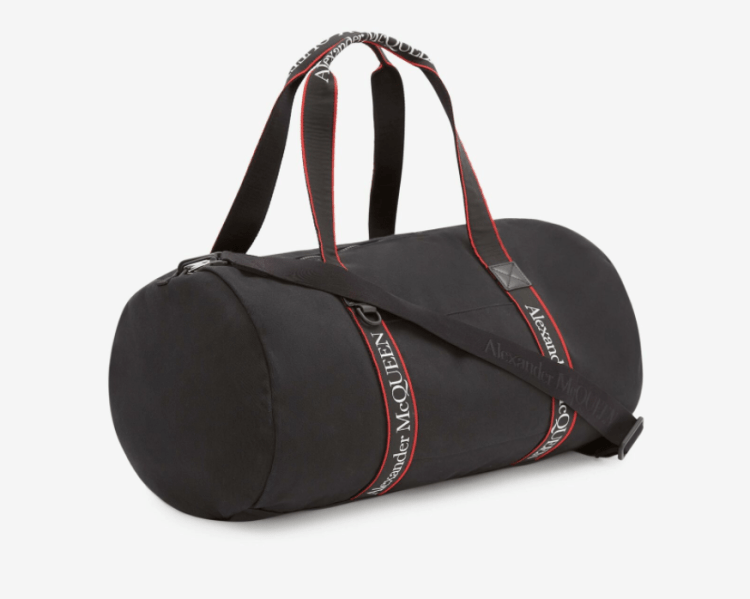 Best for incomparable fashionability: Alexander McQueen’s wares are so opulent that their website ensures that every item will be shipped in elegant packaging. You just can’t take it! This deceptively basic duffel has the iconic couturier’s name on the selvedge handles and straps and a black signature fabric lining — it’s extravagant both inside and out. 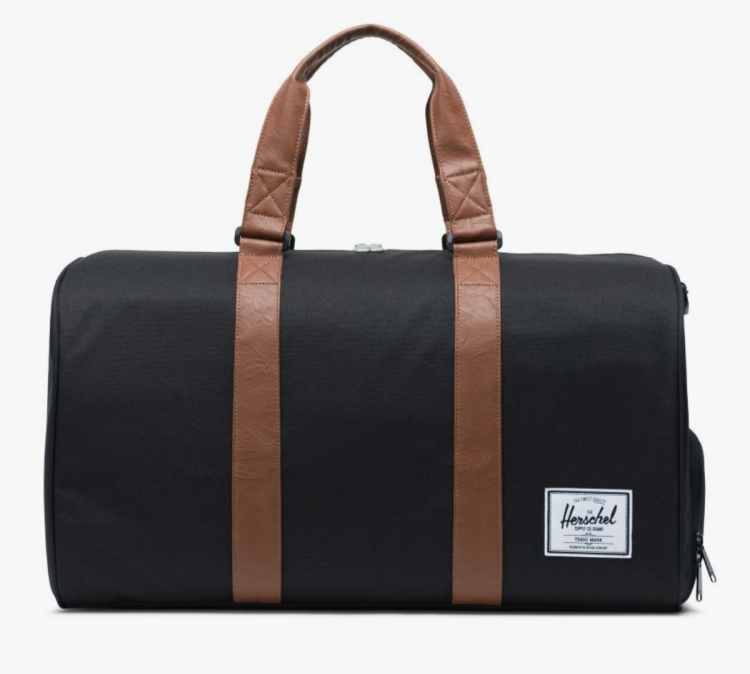 Best for flying under the radar: Herschel took hold in New York as a symbol of normcore street smarts, but wearing the brand’s impressive line of accessories doesn’t only denote urban detachment. In fact, Herschel’s goods are just plain well-made. This duffle, described as “the ideal weekend bag” features an internal storage sleeve, reinforced handles, and a signature shoe compartment. 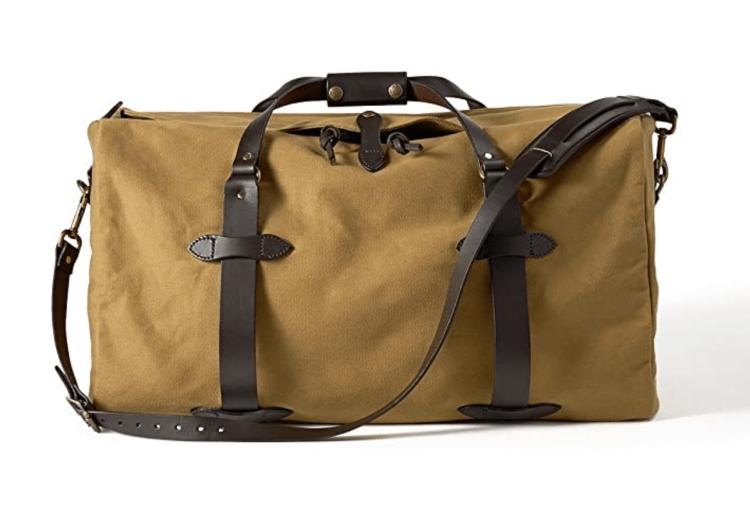 Best for vintage fans: Filson stepped their game up with this highly crafted duffle featuring leather handles and a two-snap grid. The “modern metro” bridle leather enclosure is especially classy, and the water-resistant rugged twill gives the bag a look of old-world elegance. 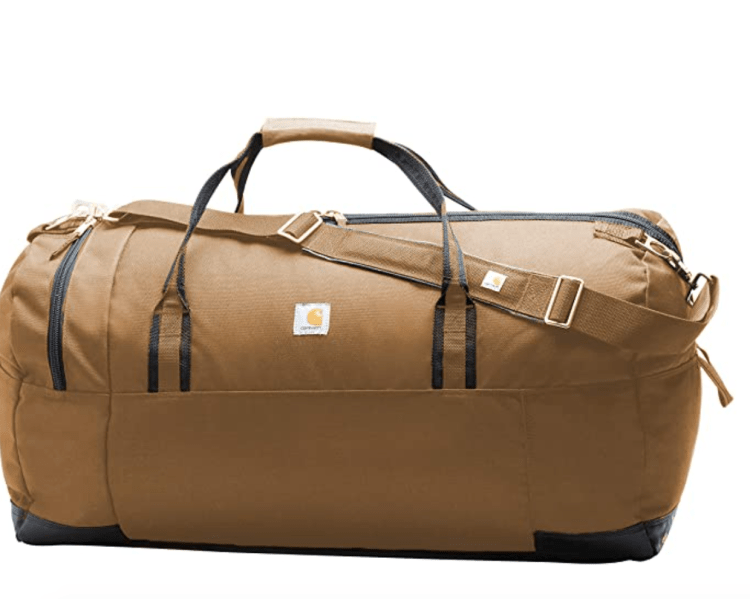 Best for indestructibility: Originally intended as industrial clothing for manual laborers, Carhartt’s extremely tough and dependable clothes have somehow become a staple for trendy members of the professional/managerial class and subcultural fashionistas alike. The legacy gear bag is as indestructible as anything else the brand produces, and it’s no surprise the accessory is meant to carry heavyweight tools (even though it’s more likely to hold a carefully folded suit and tie these days). 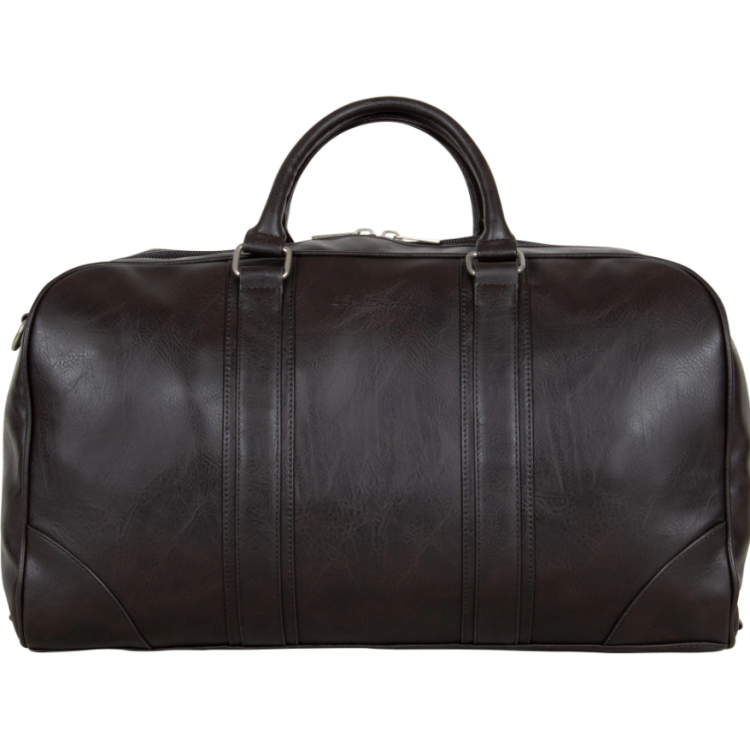 Best for vegans: Ben Sherman, another notable mod brand whose designs defined style in the UK in the 60’s and 70’s, is offering this faux leather alternative to the nylon, polyester, and leather options on this list. At just 20 inches long, this travel bag’s “lightweight construction helps you adhere to airline weight restrictions to avoid unneeded airport fees.” 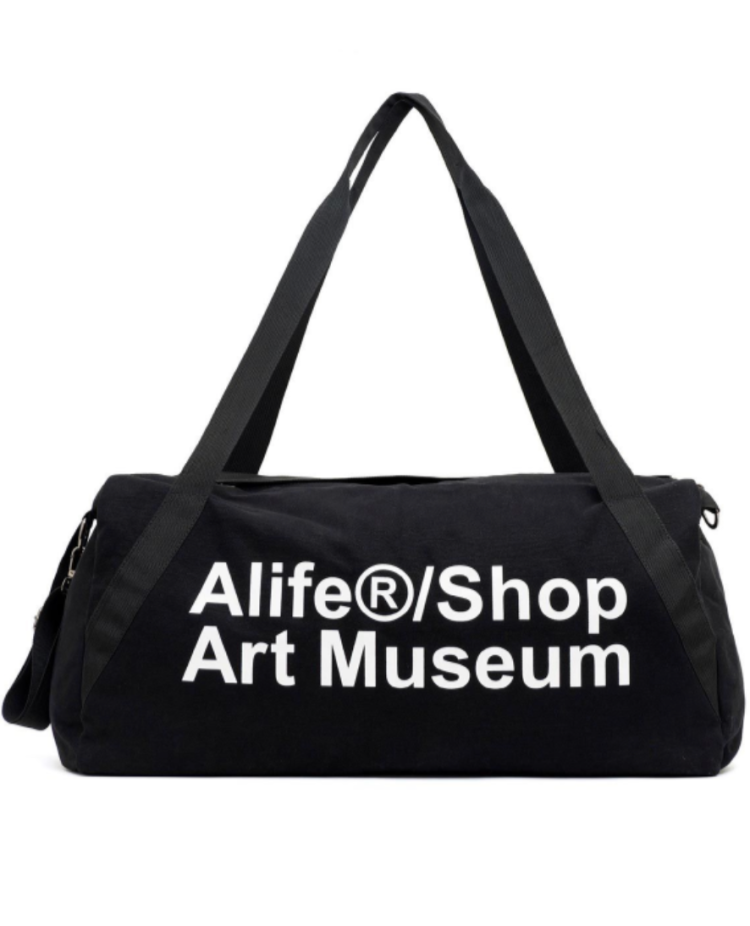 Best for New Yorkers: Founded in 1999, Alife’s was “originally a creative workshop based in Manhattan’s Orchard Street, [the label’s] innovative designs and forward-thinking products propelled them into an internationally renowned streetwear clothing brand and boutique,” according to Hypebeast. Their duffel bag, with daringly un-subtle branding, is a nod to urban know-how from the City that Never Sleeps.