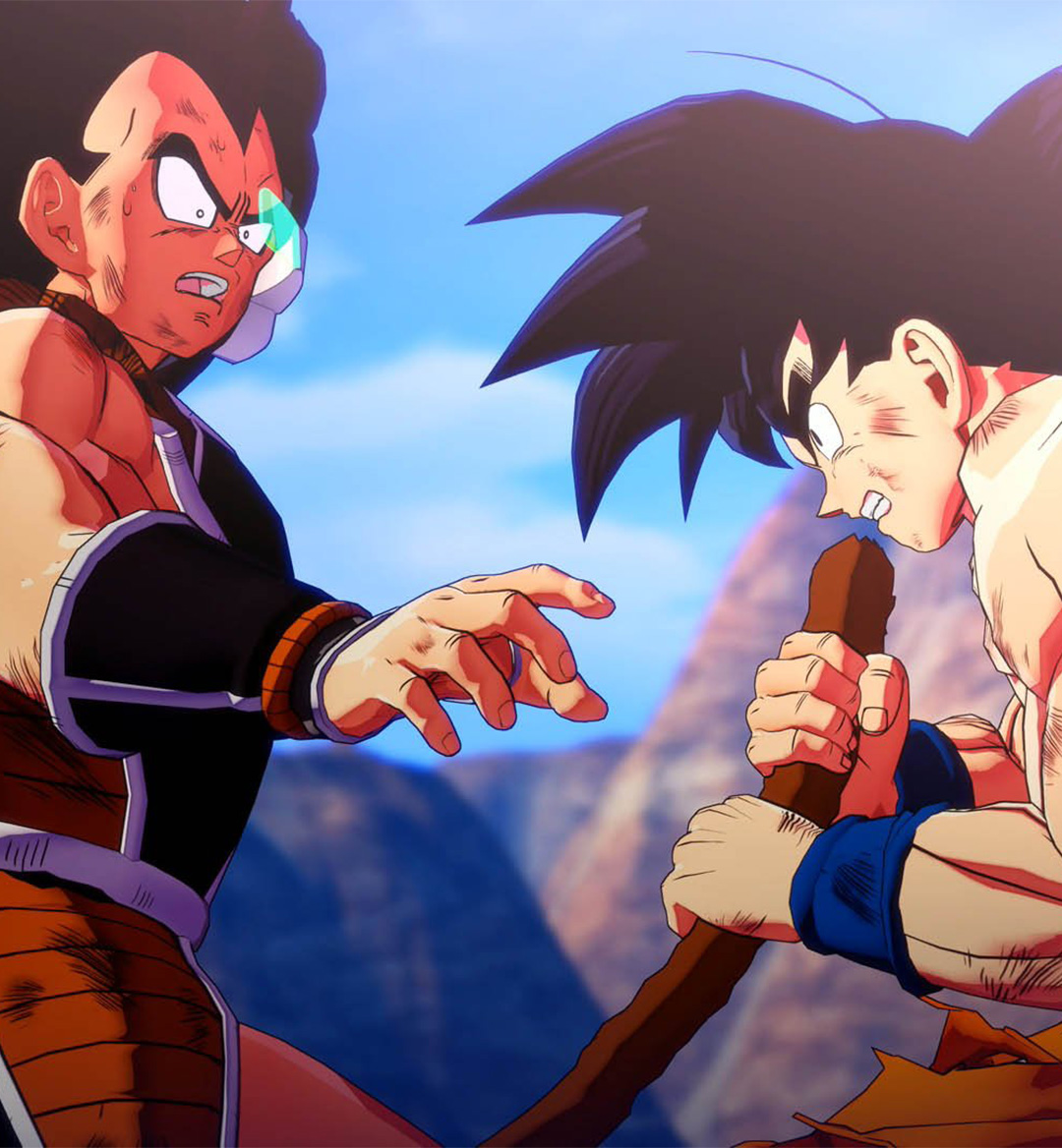 And if you consider yourself a lifelong otaku, then you know why that’s the case. The famed Japanese manga artist and character designer is best known for giving the world the gift of Dragon Ball. Through a successful collection of ongoing manga and anime series, Goku and the gang have accrued monumental mainstream popularity. Dragon Ball’s super-powered martial artists have captured everyone’s imagination due to their affinity for engaging in hyperfast battles, powering themselves up to shocking levels of power, and sending deadly beams out their hands & fingers. It’s hard to deny just how important Dragon Ball is to the world of anime and mainstream culture as a whole.

With such a major property like Dragon Ball out in the world, it should come as no surprise that a bunch of video games has been dedicated to it. A good majority of them are Wal-Mart bottom-of-the-barrel material, but there’s a strong collection of Dragon Ball games out there worth mentioning. We played 14 of those sublime Super Saiyan gaming experiences and are here to remind you of them all.

Dragon Ball Z is an anime about a whole bunch of dudes and women powering up to bash each other's brains in. That simple premise is supported by some epic story arcs that feature some of the most sinister villains in all of anime. With such an easily understandable concept, it’s easy to see why a long list of fighting games have been devoted to the Z Warriors and their foes. One of the finest examples of that ongoing trend is this SNES 2D brawler. Dragon Ball Z: Super Butōden 2 wasn’t just only a matter of better is more - it also improved upon everything that the first game relied upon. The addition of playable movie plots, special counterattack moves, and meteor combos lifted this 16-bit fighter to new heights above its predecessor.

The Game Boy Advance features a smorgasbord of Dragon Ball games. Some of them are surprisingly decent and some of them are horrifyingly bad. The Legacy of Goku series is one of the stronger sub-series within the Dragon Ball line and each game has its own positive attributes worth speaking on. But the game that clearly stands as the best is the second one. And it’s easy to recognize why - it allows players to play out the events of the (arguably) greatest story arcs in Dragon Ball Z history and offers a more refined gameplay experience. The expanded playable roster also did a great job of adding an extra sense of fulfillment to the game’s quality RPG structure.

The first Budokai was an adequate attempt at creating a 3D Dragon Ball Z fighter. The second Budokai was a half step in the right direction, but it faltered a bit due to a weird board game adventure mode. Then Budokai 3 came into everyone’s lives and helped the series finally realize its true potential. The cel-shaded visuals became their very best, navigating the extensive “Dragon Universe” mode added hours of fun, and the refined battle mechanics made the onscreen action look just as good as the one from the anime. The feeling of finally unlocking SSJ4 Goku, SSJ4 Vegeta, and Omega Shenron truly made you feel like a king in Budokai 3. And tearing up your friends as those characters felt oh so good.

Super Dragon Ball Z takes the cake for being one of, if not the most underrated Dragon Ball Z game on this list. It came out during the height of the 3D PS2 games, which is why it probably got ignored by most. And that should be considered a crime because this slept-on fighting game deserves more love. The cel-shaded visuals were really striking and evoked memories of the manga art the series was born on. Instead of offering a more casual approach to one-on-one combat, Super DBZ incorporates more traditional fighting game control inputs and combo routes. Seeing as how this game had development input from one of the guys that worked on Street Fighter and Darksiders, that gameplay feel makes perfect sense. Seek this one out and make sure you give Chi-Chi a spin (she’s a total badass in this game!).

The OG Dragon Ball saga gave us young Goku as he fought his way through dangerous foes such as Mercenary Tao and King Piccolo. The entirety of Goku’s initial adventures is perfectly detailed within this shockingly great Game Boy Advance release. Dragon Ball: Advanced Adventure features Goku and his training partner Krillin as they explore different environments, clash with familiar baddies, and take to the air on the Flying Nimbus for some airborne clashes. The best parts of this game arrive when it comes time to get locked into some one-on-one battles that raise the stakes and get the blood pumping. Dragon Ball: Advanced Adventure is one of the best ways to make your way through Goku’s early origins and play them out in the most gratifying way possible.

The Budokai series got plenty of accolades on the PS2, so it didn’t come as a shock when it made its way over to the PlayStation Portable. Dragon Ball Z: Shin Budokai may have gotten rid of the “Dragon Rush” technique, but it still managed to be awesome thanks to the speedy “Aura Burst” mechanic. That changeup and the always enjoyable Budokai battle mechanics did enough to make this portable variation of the series succeed on its own. And thanks to the game’s “Dragon Road” mode, players got treated to a playable storyline that diverted from the usual arcs we’ve already played a million times before. The sequel to this one feels like a step-down, honestly - just go out of your way and play this far better predecessor.

One of the most fun things you can do with this game is hopping into Team Battle and hitting the random button for your entire squad. That simple premise became hours of fun due to the fact that Budokai Tenkaichi 3 features a whopping roster count of 161. Thankfully, having access to all those recognizable Z Warriors meant you could use them all in the best game in the Budokai Tenkaichi sub-series. The gameplay became even more refined, the “Dragon History” story mode featured an extensive playable summary of the show’s history, and additional modes made Budokai Tenkaichi 3 one of the most feature-rich Dragon Ball Z fighting games.

Once the Dragon Ball Z fighting games made the jump to PS3 and Xbox 360, it did so by combining the best elements of Budokai and Shin Budokai. Add on a much more refined cel-shaded art palette and you’ve got yourself one of the better-looking Dragon Ball Z fighters on the market. Dragon Ball Z: Burst Limit’s combat offers fast-paced gameplay that also incorporates character assists, the clever implementation of climactic “Drama Pieces,” and the awesome “Aura Spark” mode. Even though this pick on our list sadly didn’t include the Majin Buu saga as a part of its “Z Chronicles” mode, we still enjoyed participating in its story recreation battles. Dragon Ball Z: Burst Limit took the Budokai format to new impressive heights.

Dragon Ball: Origins is pretty much a more refined version of Dragon Ball: Advanced Adventure. Instead of presenting all the anime’s classic exploits through a side-scrolling format, this Nintendo DS title does it all through a top-down action RPG presentation. If you love The Legend of Zelda: Phantom Hourglass, then you’ll most likely find a lot of enjoyment here with this game if you haven't checked it out already. Playing with Goku as he grows into the legendary fighter he is and running alongside Krillin, Bulma, and Master Roshi makes up the gamut of this Dragon Ball gaming gem. And we’d be remiss if we didn’t mention this game’s awesome Flying Nimbus race and chase segments.

Retelling the very first story arc of Dragon Ball Z and mashing up its iconic clashes with a turn-based battle system worked out way better than we thought it would. Dragon Ball Z: Attack of the Saiyans feels like the perfect marriage between Final Fantasy and Super Mario RPG. The well-known plot is played out in epic fashion and pulling off the Z Warriors’ sick super moves through active combat commands is part of the game’s mass appeal. The fact that this Dragon Ball Z RPG never received a sequel should be considered criminal. We would have loved to take down Frieza and his loyal forces through the turn-based assaults featured in this slept-on game.

Any child of the 90s will tell you - if they were a fan of Goku and the gang, they regularly drew their own custom Super Saiyan heroes inside their notebooks. Once the first Dragon Ball Xenoverse hit the scene, creating one’s very own anime powerhouse finally became a reality. While that game was an amazing revelation, the sequel truly solidifies the series as a Dragon Ball Z fans’ dream come true. Conton City offers a vastly better version of Toki-Toki City that’s jam-packed with fellow Time Patrollers, familiar faces, and recognizable hub worlds. The game’s larger roster gave way to even more skills that can be applied to your custom fighter, which became quite a compelling activity. The huge multiplayer suite and continued updates present Dragon Ball Xenoverse 2 as the gift that just keeps on giving.

For the longest time before this game came into existence, hardcore fighting game fans longed for a traditional 2D brawler that featured the Ki blasting combatants of Dragon Ball Z. Lauded fighting game development studio Arc System Works rose to the occasion to fulfill that grand wish and ended up creating one of the greatest anime fighters of all time in Dragon Ball FighterZ. This amalgamation of Guilty Gear’s slick animation and Marvel vs. Capcom’s team-based battles are a smashing success. Each character comes with an easy set of moves to remember, but it takes true skill to master each one of their intricacies and smartly utilize them in tandem with their partners. Dragon Ball FighterZ is the dream game that we all wanted to play. And thankfully, it exists and is incredible in every regard.

Don't sleep on this mobile Dragon Ball Z game. It’s not some cheap hack job that was just thrown out there to bleed people’s digital wallets dry - it’s actually a shockingly gorgeous action RPG that features an easy to comprehend battle system. Dragon Ball Legends will pull you due to its mass array of unlockable characters, who can then be taken into intense combat scenarios. Once a fight breaks out, both characters ascend to the sky as you use focus taps in order to pull off devastating attacks. There’s a good amount of strategy that goes into preserving your energy for major maneuvers and overwhelming your opponents. Those attributes will most certainly appeal to even non-Dragon Ball Z fans who’re looking for their next mobile game addiction.

Shout out to publisher Bandai Namco Entertainment and noted anime games developer CyberConnect2. Their fruitful partnership has resulted in a wide swath of anime games that do right by their demanding fanbases. Dragon Ball Z: Kakarot is definitely one of the best games to come from that ongoing business relationship. Watching the show is one thing, but getting to actively participate in all of its most thrilling moments. Flying through the air to pick up Z Orbs, going Super Saiyan to eliminate the opposition, and enjoying a nice round of fishing are just some of the great activities you can do in this fan-requested action RPG. The base story campaign and the Dragon Ball Super-themed add-on’s make this game one of the comprehensive anime experiences out there.