The Most Valuable 'Dragon Ball' Cards 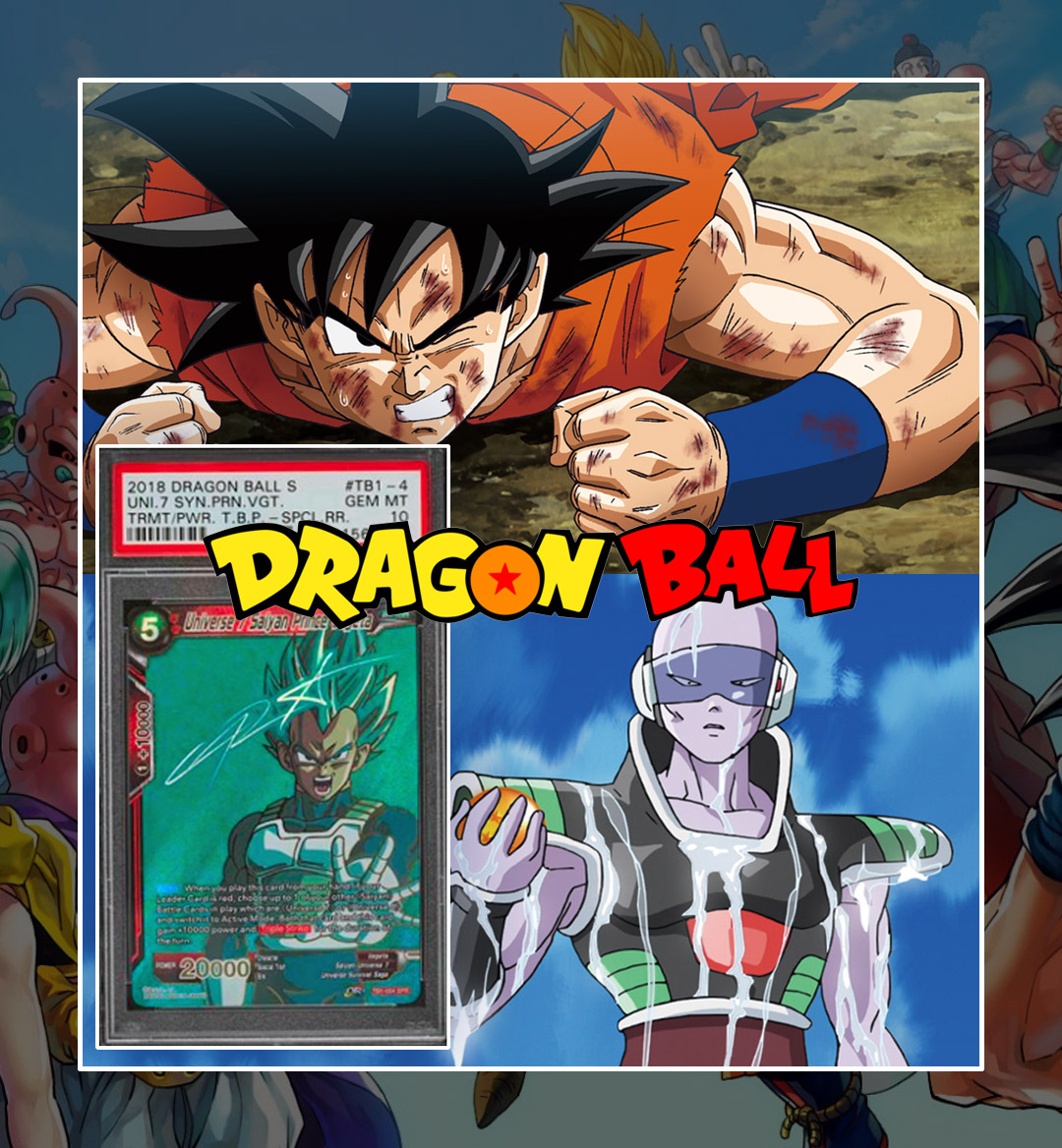 Before I introduce the most valuable Dragon Ball cards ever sold, let's discuss the franchise.

Since 1984, Akira Toriyama’s Dragon Ball has captivated both readers and audiences on its path to becoming one of the most recognizable franchises in pop culture. Our generation has grown up alongside Son Goku and company, so it’s no surprise he is one of the most recognizable faces in all of fiction. Toriyama’s original manga has spawned multiple anime series, feature films, video games, and of course, trading cards.

Dragon Ball trading cards, much like Pokémon, Magic: The Gathering, and Yu-Gi-Oh, are heavily revolved around tournament play and strategy.  The official Dragon Ball Super website even shows upcoming tournaments and ways to get involved in regional events. However, there is a collector’s aspect to these cards as well, and the glorious artistry is evident in all the cards you see today.

Dragon Ball debuted its first card game in 2008 with its inaugural set, Warriors Return. Since then, the TCG has seen a complete revamp in the last few years with dozens of new releases.  With many high-dollar sales in the last year, it will be interesting to see if DBZ/DBS becomes a mainstay in the trading card world. So today, we are going to break down the most valuable Dragon Ball cards from those sets and give a little background on the card. Let’s jump right in! 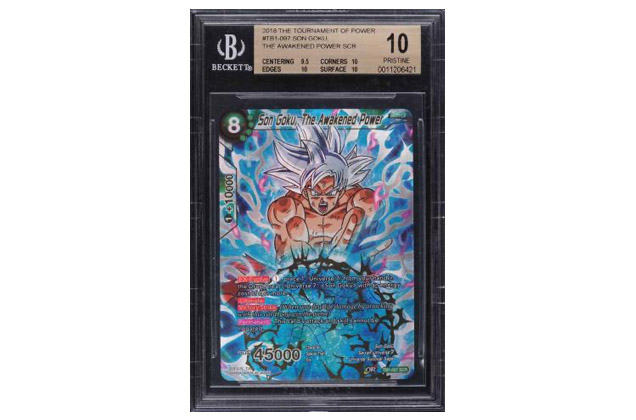 To kick this list of the most valuable Dragon Ball cards off, we have a card of Dragon Ball’s heroic protagonist, Son Goku. This card in particular features Goku using the "Ultra Instinct" technique in battle. We see the same display of intricate and striking artwork that is shown in the series. "The Tournament of Power," which is the set where you can find this stunner, was released in 2018. It is the first known themed set from the Dragon Ball universe, as it is based on a tournament of the same name from the Dragon Ball Super universe.

Grading is going to be a common theme on this list, and this slab shows the premium a Beckett Pristine 10 can bring. There is also one known Beckett Black Label sale in 2020, but it has yet to resurface.  It sold for over $12,000 last year, and there isn’t even a BGS 10 listed on eBay currently. We have seen a decline in recent auctions, however, and one recently reached a price of only $4,950 back in June. Regardless, this is undoubtedly one of the premier DBZ cards a collector can have. 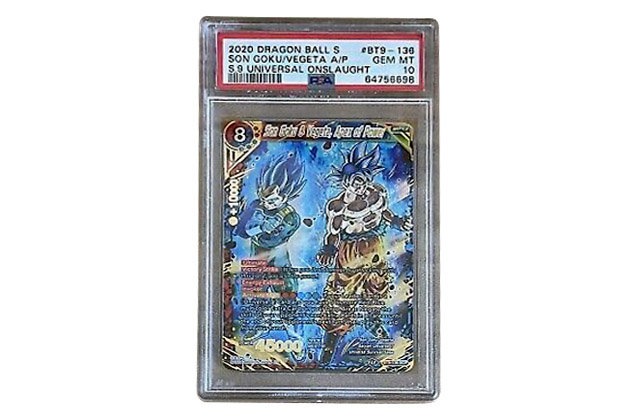 Next, we have a team-up of Goku and Vegeta, a powerful duo that has 45,000 power and a ton of perks if used in tournament-style play.  And as collectors, how could we not notice the coveted BGS 10 Black Label that this card received?

This card is a part of the "Universal Onslaught" set, which is the 9th set stemming from Dragon Ball Super.  It only sells now for around $1,800 as a PSA 10, but the esteemed Black Label brings an exponential premium in the trading card community.  This is one of the most useful and collectible cards to have for the DB Game, so it is a no-brainer to have it very high on our list. 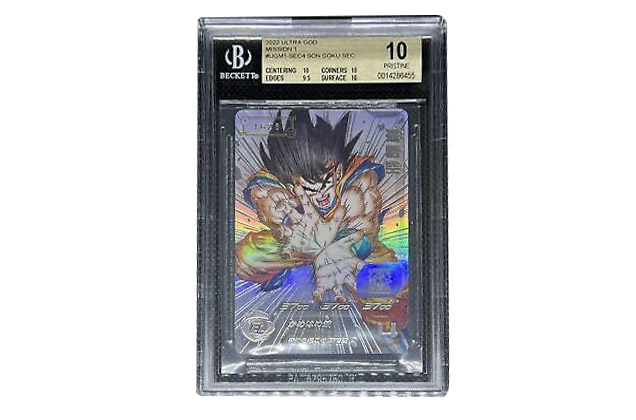 Here we have another feature including our main man Goku from the 2022 Ultra God set.  The rainbow foil and unrivaled artwork of this piece really make it stand out from other TCG cards.  It’s also a very recent release, so seeing this in a pristine BGS 10 copy really makes it the whole package.

For reference, there are currently only 18 registered PSA 10s, making this Pristine 10 even rarer.  This beauty sold for $5,600 in May, and we are eager to see how it and other brand-new sets fare on the market in the coming months. 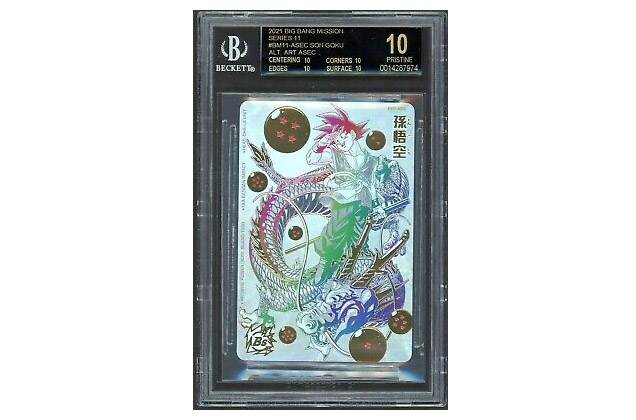 Tied for number 4 on this list is the first alternative art card, and it makes use of every inch of the surface. Here we see Goku mounted atop a glimmering dragon, and a rainbow foil across the front makes it pop out to the viewer.  This flawless BGS 10 Black Label can be found in the Big Bang Mission set. Boosters can be hard to come by online, but you can find a sealed box for this release here.

This, much like others on the list, sports an extremely low pop. The superb copy you see above recently sold for $4,500, and it will be hard to come by a Black Label 10 anytime soon. 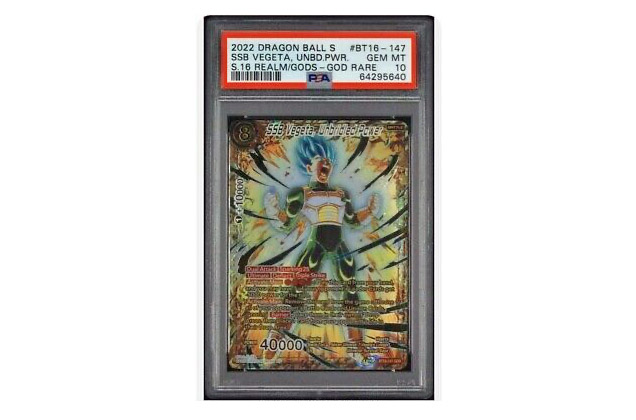 Our other #4 spot is the first one on the list to feature Vegeta by himself.  And we think it does justice to one of anime’s most well-known characters.  This “God Rare” short print hit the shelves in the new "Realm of the Gods" set, which is the 16th series from Dragon Ball Super.

Also useful for gameplay, the card possesses a whopping 40,000 power and can be very advantageous in tourneys. This gem sits as a POP 95, and it sold for as high as $4,500 back in April. 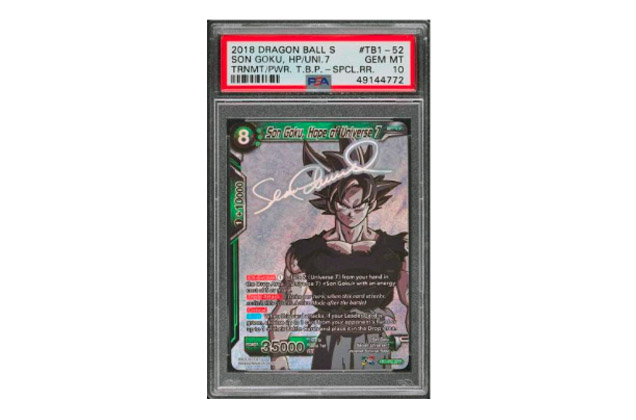 Continuing on to the 6th card on our list and it is another one from the sought-after "Tournament of Power" set. While not as popular or liquid as the "Awakened Power" card, this artwork of Son Goku is still very impressive to the eye. There are only 298 PSA 10s in circulation, and you can shop for them in all grades here. 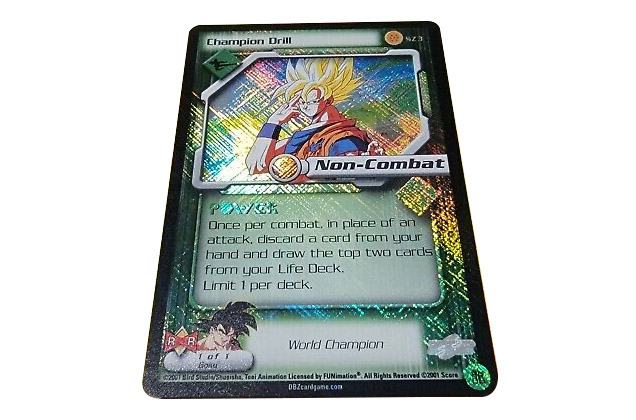 Score’s produced DBZ cards in the early 2000s, years before Bandai launched its collectible card game in 2008.  These sets have a very familiar feel: the defined borders and formatting are quite similar to other TCGs. However, a low print run makes these earlier copies hard to come by.  There haven’t been many graded sales recently either, so $3,350 for this raw Super Saiyan Goku is quite a pretty penny. 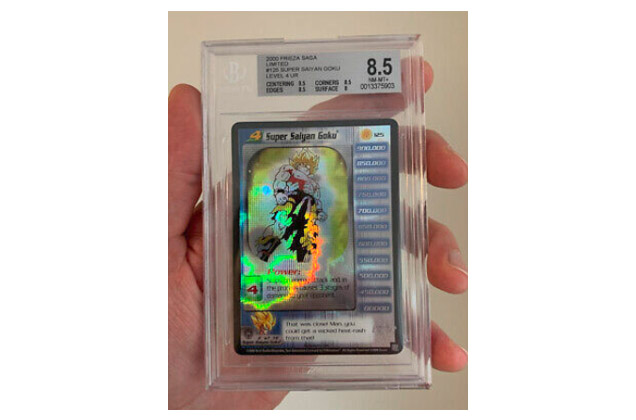 Following the same trend, we have another early Score TCG Super Saiyan Goku. Only this time, it is slabbed with a Beckett 8.5 grade.  The black borders of this piece make it inherently difficult to grade; so difficult, in fact, that there are no current PSA 9s or 10s in the registry. For a big DBZ collector, this is a rare and unique copy to own, and it’s just not one you will see being auctioned off very often. 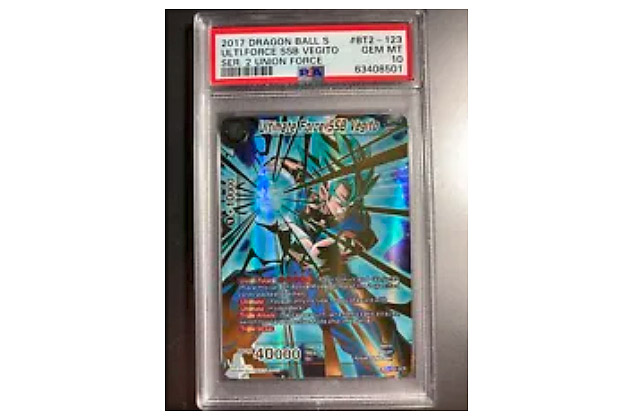 At number 9 we find the first appearance from Vegito, another immensely powerful being in the Dragon Ball universe. This card is one of the chasers from the Union Force set, which is the 2nd released set for Dragon Ball Super. A POP 155, this colorful and radiant gem sold for $3,050 in July 2021. 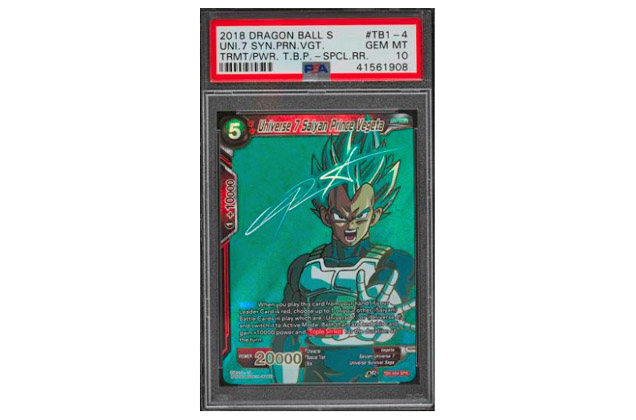 And to round off this list, we have one last feature of Goku’s eventual ally, Vegeta. This PSA 10 copy also can be found in the "Tournament of Power" booster boxes, which have become quite popular in their own right.

This card boasts a bold facsimile autograph and a crisp teal background to match Saiyan Prince Vegeta.  It sold for $3,000 last year and currently sits as a POP 165.

Who is your favorite Dragon Ball Z character? Which card do you think will crack our list of most valuable Dragon Ball cards in the future? Let us know @CardTalkPod on Twitter and Instagram!