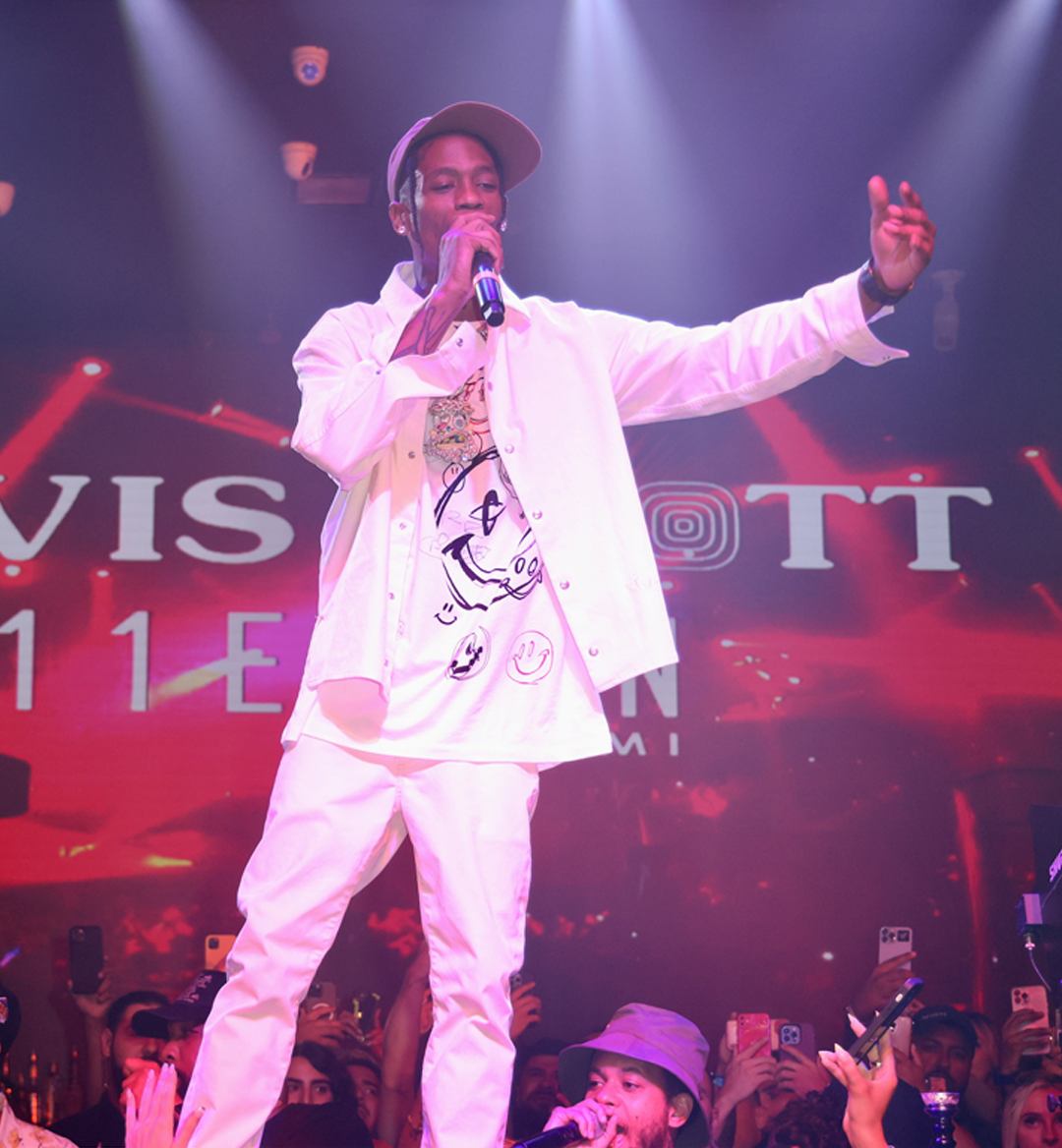 What’s your favorite Travis Scott line? Do you even have one? Does anybody? Despite being incredibly popular and acclaimed, Scott has never made particularly thought-provoking music, unless those thoughts are no cap fr fr and AAAAAAH!

For the most part, Scott traffics in vibes, setting the mood with a blown out bass here, a syrupy synth arpeggio there. This is all clever branding: Scott is a cool and handsome guy, so he makes music that aims to project a cathected coolness and handsomeness upon his listeners too.

And yet, Scott’s uncontainable raging is harder to stomach in the wake of the tragic death of eight people during his performance at his Astroworld Festival. Lyrics like “it’s not a mosh pit if there’s no injuries” hit different now—namely, they hit worse.

Although Scott’s recent concerts have still maintained his signature energy, they’ve mostly been small-scale events at night clubs and private events. By the time Scott hits the road to headline a spate of festivals in the fall, he’ll surely do so with additional guardrails and precautions surrounding him.

The rage isn’t dead, but it’s been put in timeout; rap’s most image conscious star has to reckon with the fact that a central pillar of his image has buckled under its own weight.

With Scott announcing his grand return with a pair of concerts in London and then a Vegas residency, he comes bearing gifts—his long-awaited album Utopia is rumored to drop some time within the next few months. In the four years since 2018’s Astroworld, Scott has become one of music’s biggest stars, in large part due to his relationship with Kylie Jenner.

For companies looking to address their KPIs by tapping into a younger demographic or something like that, Scott became the go-to pitchman. Despite his meager output, his brand as the Pied Piper of suburbia remains strong, placing him at the center of an ever-expanding sprawl of soft drinks and sneakers and candles and cologne.

Like Drake and Ye, Scott has reached a level of stardom that practically transcends music; Travis Scott dominates news cycles simply by being Travis Scott.

Accordingly, Utopia represents an opportunity for Scott to reassert his artistic and musical primacy. While Scott’s features and singles have often felt perfunctory, he’s one of the few remaining musicians who seems to conceive his albums as cohesive artistic statements.

On Days Before Rodeo and Rodeo, he broadened popular rap’s horizons with his new strain of gothic, portentous trap music; Birds In the Trap Sing McKnight elevated him to the mainstream, thanks to crossover hits like "Goosebumps" and "Pick Up the Phone;" Astroworld refined his sound, merging the anarchy of Scott’s biggest hits with the sativa’ed chill of his deeper cuts.

Although Scott has mostly avoided leaks during the protracted Utopia rollout, early returns suggest a mellower, more grown-up release. Of his most recent singles, the tepid “Escape Plan” is a synth-driven up-tempo offering, but “Mafia” is sparse and spacy. Similarly, leaks like the 21 Savage-featuring leak “Niagara Falls” and “Lost Forever” (the Westside Gunn collab that Scott premiered at Dior’s 2022 Summer Show) are better suited for head-nodding than head-banging.

Notably, “Niagara Falls” and “Lost Forever” are two of Scott’s best songs in years. And this makes sense—underneath all the pyrotechnics and teeth-gnashing angst, Scott’s best songs have always been his slower, crepuscular ones; ask any Travis Scott diehard their favorite songs and odds are they’ll rattle off titles like “Drugs You Should Try It” or “90210” or “Impossible” or “Oh My Dis Side” or “Maria I’m Drunk” or “Astrothunder” before they get to “Sicko Mode.” These tracks aren’t necessarily lyrical-miracle-spiritual Real Hip Hop, but they belong to a recognizable genus that includes his mentors Ye and Kid Cudi and even reaches as far back as Bone Thugs-N-Harmony in the 90s.

If Scott brought rap’s now-dominant punk aesthetic to the maintream, he’s also ceded it to the next generation—he doesn’t mosh like Playboi Carti or Yeat; he doesn’t preen like Lil Uzi Vert. Earlier in his career, touting his wide-ranging tastes (and general disdain for hip hop) may have been an easy gambit for Scott to prove he’s Not Like Those Other Rappers.

But as he enters his second decade of stardom and prepares to drop his first post-Astrofest album, his success hinges on his acceptance that he defines hip hop’s establishment rather than defies it.