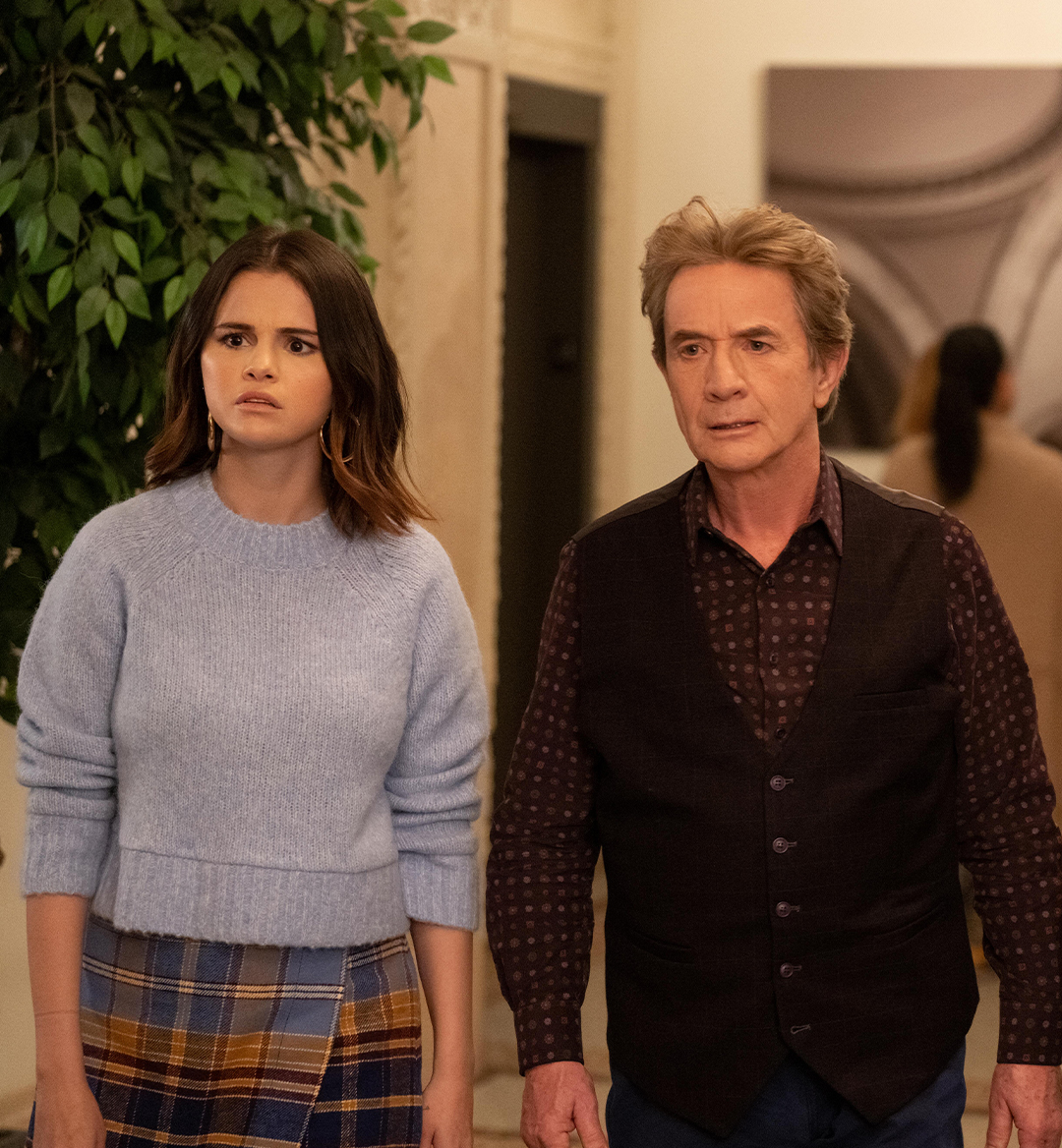 I'm not quite sure what I'm going to do without Martin Short screaming about dipping sauces on my television each week, but I'm going to need to come up with something.

While Season 3 of Only Murders of the Building has been confirmed, it likely won't be airing for at least eight or so months, which means we've got a major chunk of time to fill with like-minded shows. While these next 15 might not have the same ratio of trash-talking parrots and dipping sauce, they're definitely well worth the watch.

If there's going to be a gathering of the shows like Only Murders in the Building, The Flight Attendant has got to be at the top of the list.

Kaley Cuoco plays the part-alcoholic, part-flight attendant, and part-amateur murder investigator in her role as Cassie Bowden, who—at this point—is just trying to catch a break from the murders she keeps becoming intertwined in. With her friends, Annie (Zosia Mamet) and Max (Deniz Akdeniz), Cassie attempts to piece together why she keeps being implicated in various international crimes.

This mockumentary-style mystery series tracks Peter Maldonado (Tyler Alvarez) and Sam Ecklund (Griffin Gluck) throughout two different absurd, school-centered crime investigations as they gather all of the facts and try to establish who was truly responsible for each one.

And yeah, this series was cut WAY TOO SHORT. I'm looking at you, Netflix.

Dead to Me is the genre-bender of all genre-benders. Through the unlikely friendship of Jen Harding (Christina Applegate) and Judy Hale (Linda Cardellini), the two attempt to forge a friendship and solve a crime that hits close to home: the death of Jen's husband, Ted, which was practically left as a cold case since it was a hit-and-run. Created by Liz Feldman, the series has no shortage of humor; it's perfectly complemented by the overarching investigation and daily trials—and lies—of each of their lives.

An improvisational murder-mystery-comedy series, Murderville uses an interesting tactic to make the show an almost-genuine mystery: the designated guest star of each episode goes into the filming cold—sans script—and has to react and improvise in real-time to figure out who committed the murder. Will Arnett stars as Terry Seattle, the lead detective on each case who's also responsible for helping out his celebrity trainees through the investigations.

With its devotion to the comedic element of murder mysteries, Murderville is a new, well-deserving installation to this grouping of shows like Only Murders in the Building.

Another series that bends the genre rules, Barry combines the themes of crime, drama, and comedy into one as a hitman named Berry Berkman (Bill Hader) becomes engrossed in the world of acting while going off track on a mission. After joining an acting class, his worlds collide as he attempts to deal with his hitmen colleagues as well as his acting peers, all the while attempting to figure out what he really wants out of life.

Set at the fictional resort, The White Lotus, in Maui, Hawaii, this series of the same name tracks a few different groups of tourists as they vacation at the same hotel. However, at the beginning of the series, we're clued into a murder occurring there, which leads the series to backtrack in order to figure out who's responsible.

With all of its winding and sudden plot twists, The White Lotus is by far one of the greatest shows like Only Murders in the Building.

Kate Winslet plays the eponymous Mare Sheehan, a detective at the Easttown Police Department who's battling her own unaddressed trauma while also trying to solve two different murder and disappearance cases. At the same time, she's raising her daughter and grandson and living with her mother, creating even more stress and drama for Mare at home. Oh, and her ex-husband lives in the house right behind her's, so there's that.

An absolute classic series, Monk stars Tony Shalhoub as Adrian Monk, a detective who's obsessed with the murder of his wife, Trudy, which occurred as a result of a car bomb. The series deals with Monk in the aftermath as he gets back to work as a private detective and police consultant, balancing the genres of mystery and comedy in the process.

Between the perfect cast and comedy, Monk is definitely one of the best shows like Only Murders in the Building.

Nothing good happens after midnight, right?

The Afterparty is about just that: an afterparty following a high school reunion that leaves one of the attendees dead. The series takes an interesting approach to the murder as each episode breaks down a different character's take on the events that went down.

Burton "Gus" Guster (Dulé Hill) and Shawn Spencer (James Roday) are two best friends in Psych, which is about a consulting agency (named "Psych") that Shawn created since he's able to solve tons of criminal cases simply because of his increased awareness and other observational skills.

Basically, he's a psychic in the eyes of the police, which makes them suspicious of his involvement in the cases, hence the creation of Psych in order to legitimize himself. Shawn and Gus team up at the agency to solve different crimes, even though Gus is a salesman for pharmaceutical products.

A show that lasted for 12 seasons and over 10 years, Bones follows forensic anthropologist, Temperance "Bones" Brennan (Emily Deschanel), and FBI Agent, Seeley Booth (David Boreanaz), who find themselves working together pretty often on cases involving unidentified human remains. The series toes a well-balanced line between crime and comedy, tracking the pair as their relationship grows while working closely together.

Natasha Lyonne is Nadia Vulvokov, a woman who finds herself in an infinite time loop at the time of her death at her 36th birthday party. Russian Doll explores Nadia's search for the answer to her current dilemma, which involves meeting someone else at her party who's going through the exact same experience.

Search Party—much like Only Murders in the Building—features a group of amateur detectives in New York City attempting to investigate the disappearance of a man from Dory Sief's (Alia Shawkat) college. Having just wrapped up its fifth and final season in 2022, the series saw an interesting transformation from detective mystery to a quest for enlightenment.

With its incorporation of novice investigators, Search Party is definitely deserving of being one of the top shows like Only Murders in the Building.

From the minds of Ryan Murphy, Brad Falchuk, and Ian Brennan, it's no surprise that Scream Queens is a bit of a lighter ode to American Horror Story. With a stacked cast, the series combines horror and mystery (and a pinch of comedy), as an unsolved murder case comes back to haunt a college after the serial killer returns.