Studio 54 Fashion: The Most Iconic Looks From the Legendary Nightclub 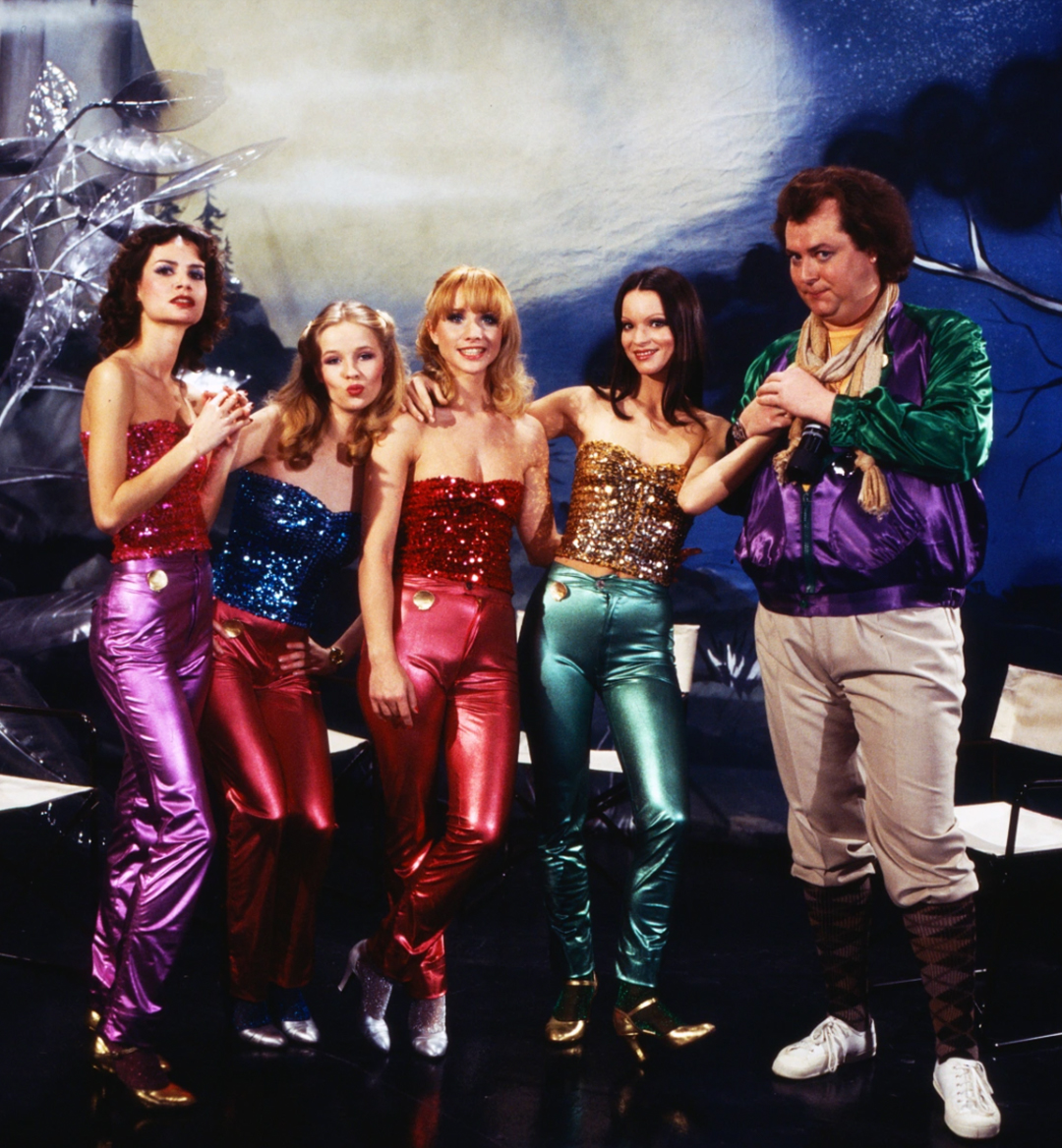 Just come on down to 54. If you are a fan of the 1970s and the fashion that went with it, then you already know about the legendary nightclub that is Studio 54. The place that everybody who was somebody had to be. The place to dance, laugh, and act wild. The place to show off the equally legendary disco and hippie fashion that dominated the decade.

If you’ve been paying attention to our Fashion on Film series, then you know in October we covered both the 1970s hippie and disco style movements, and during the disco article, we promised that we would dive a little deeper into Studio 54 and what it represented. Well, this is that deep dive. So grab a glass of wine and put your 70s playlist on shuffle because we are going back in time.

RELATED: Fashion on Film: The Disco Fever Style of the 1970s

You know Studio 54, but do you really know Studio 54? The roots of the nightclub date all the way back to 1927, when it was originally opened as the Gallo Opera House by Italian American Architect Eugene De Rosa. While the Gallo was originally designed to be a ballroom to host the fanciest of events, by the early 1930s the building was being used as a nightclub, then known as the Casino de Paree.

By the time the 1940s rolled around, the building was back to its theatrical roots as the New Yorker Theater, when CBS decided to use the theater as a radio soundstage, which it would remain as such for nearly three decades.

Fast forward to the year 1976, where a German model by the name of Uva Harden enters the picture. With an interest in establishing a nightclub in the NYC area, Harden and his business partner Yoram Polany agreed to takeover the CBS Studio, calling it Studio 54 because of its location on 54th street in Midtown Manhattan. From there, an extensive remodel process began on the club, which included spending $400,000 on the transformation which included a dance floor, disco booth, balcony, poles with flashing lights, mirrors, and floating vinyl platforms. 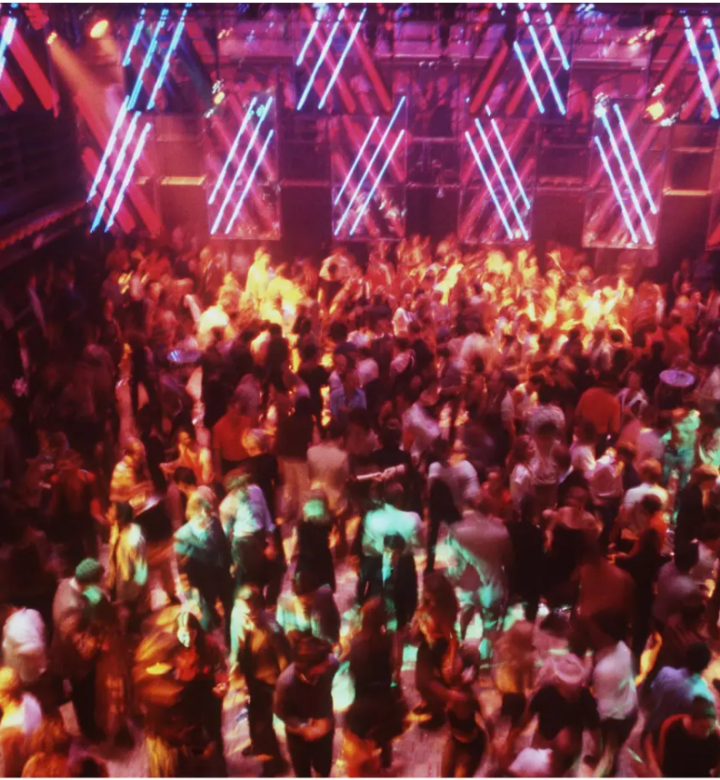 The goal of Studio 54 was to be a funkadelic fresh hypnotic experience that would take you to another dimension. To further achieve this, a special effect rigging system was installed to generate effects such as confetti, fog, snow, and different types of weather. A cyclorama was installed on the ceiling to project different galaxies, along with a back lit moon and spoon designed by the aero graphics team, which would go on to become the official studio 54 logo. Additional decorations included depictions of volcanoes, sunrises and sunsets.

Studio 54 opened its doors on April 26th, 1977 at the height of the disco music era, with its popularity growing with each month as more checked out the scene to see what the hoopla was about. Attention on the club surged even more after Bianca Jagger was pictured partying the night away, as nightly averages were around 2,000 guests a night. Despite only being open Tuesday through Saturdays, Studio 54 was massively successful in its first year of operation, making roughly $7 million in profits. The success would continue through the following year.

While the ending of Studio 54’s prime was messy (it ended with tax evasion and arrests), the club did provide some of epic style moments. Here’s 15 of our favorites. 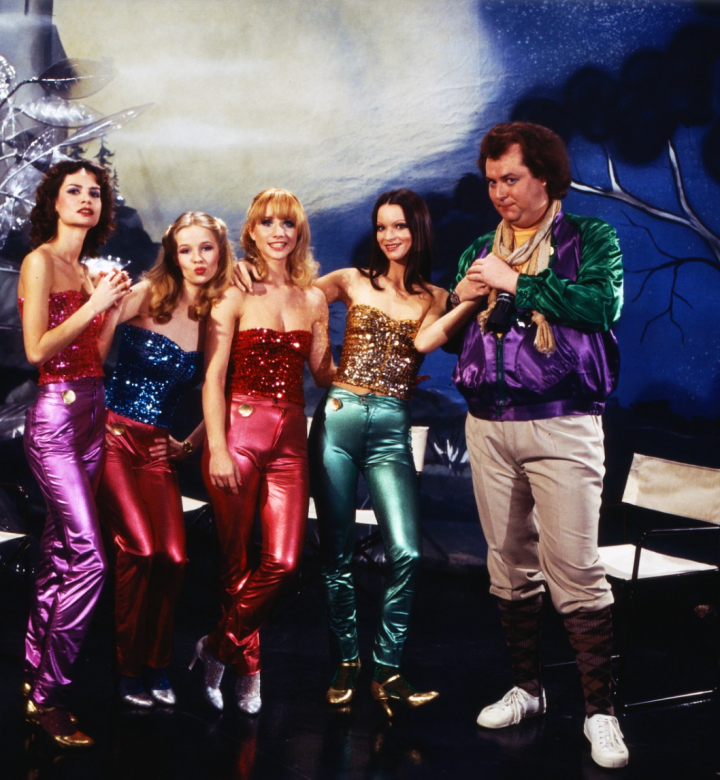 The razzling dazzling Gogo Girls. For those that don’t know, Gogo Girls were club dancers who wore outfits that at times could be considered “scandalous.” While we wholeheartedly disagree with the 1970s defined as “scantily clad,” the glittery metallic outfits that the girls wore were very fashionable, and paved the way for the futuristic style that would become popular in the late 1990s and early 2000s.

Bianca Jagger was the first major celebrity to make an appearance at Studio 54, and she always made sure to bring the good times and the good outfits. We’re not sure where the doves came from, but the hair clips and loose fitted slightly see through dress was a popular trend back in the 70s. 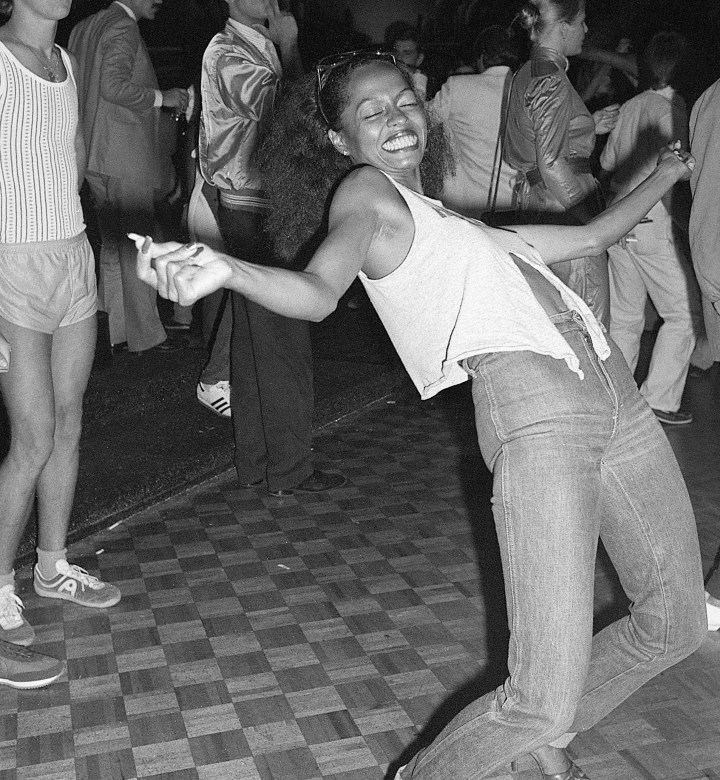 Here you can see Diana Ross having the time of her life while engaging in the limbo. The jeans and tank top combo was a rare casual style moment from Diana Ross' The Boss, as she was normally known for her extravagant glittery dresses and jumpsuits.

It’s always cool to come across rare videos from certain time periods, and here you can see a 19-year-old Michael Jackson with his amazing afro being interviewed about the importance of Studio 54 and just how much fun it was before going inside to party. In addition to the fro, Jackson can be seen wearing a blue party suit, which was pretty much the standard for the fellas when clubbing during the disco era. 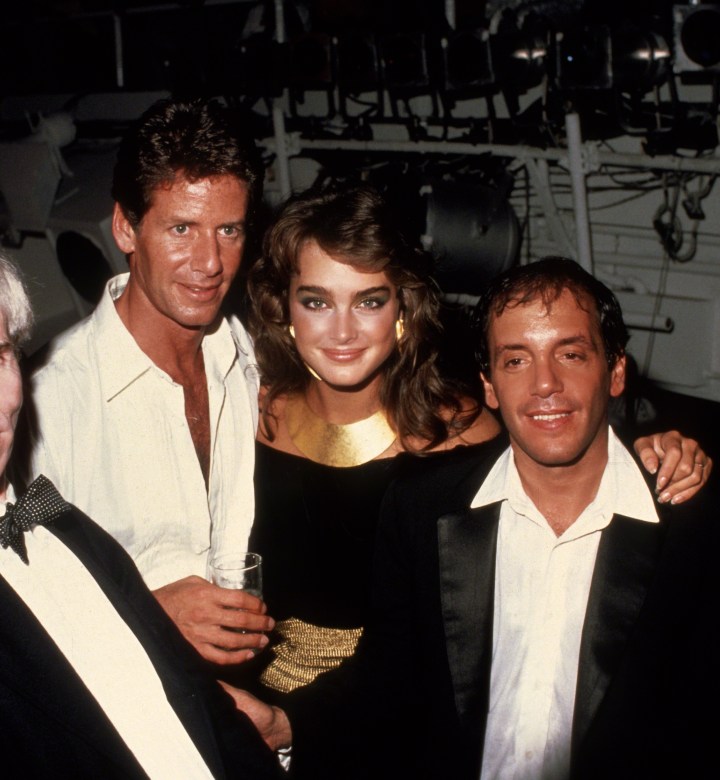 We weren’t kidding when we said that Studio 54 only let in the best of the best. While you can only see the top half of their outfits, that’s all you really need as it shows you just how much people got glammed up to go party. While the ending of Studio 54’s prime was in the late 70s, the parties still continued on into the early 1980s, as this picture was taken circa 1981.

Grace Jones was the Studio 54 queen, bringing every single element of glamor to her supermodel looks and style. In fact, most people automatically think of Jones when Studio 54 is mentioned, and at this point, you could really do a separate article on how she influenced what was worn in the club (as you can see in the picture above). 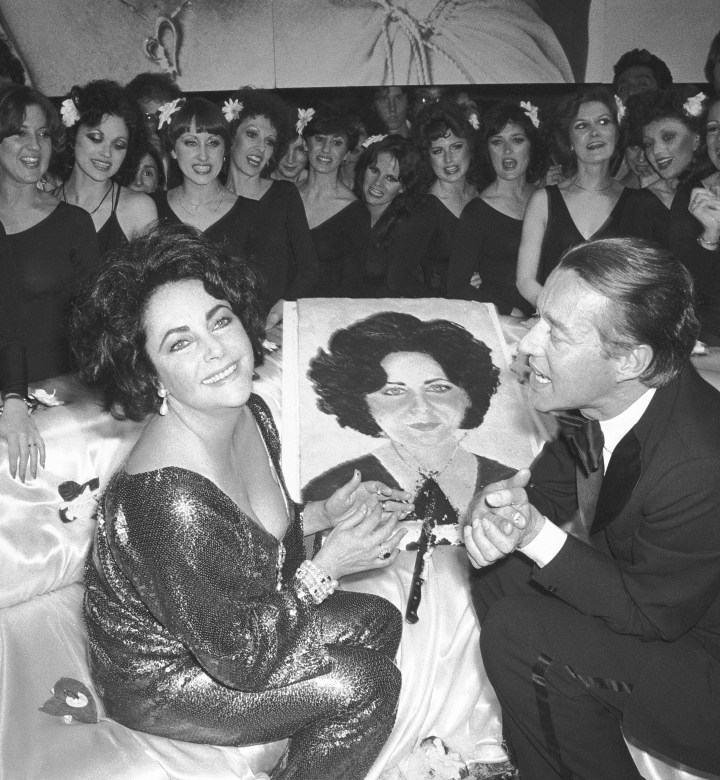 Liz Taylor got her party on at Studio 54 too, celebrating her 46th birthday in a shimmery jumpsuit with the iconic designer Halston (who we assume was the one that designed her birthday outfit). It’s a shame that some of these pictures weren’t in color because we honestly do know if this dress was gold or silver. With that being said, it’s Liz Taylor, so we’re sure she shut the party down in a way that only she could. 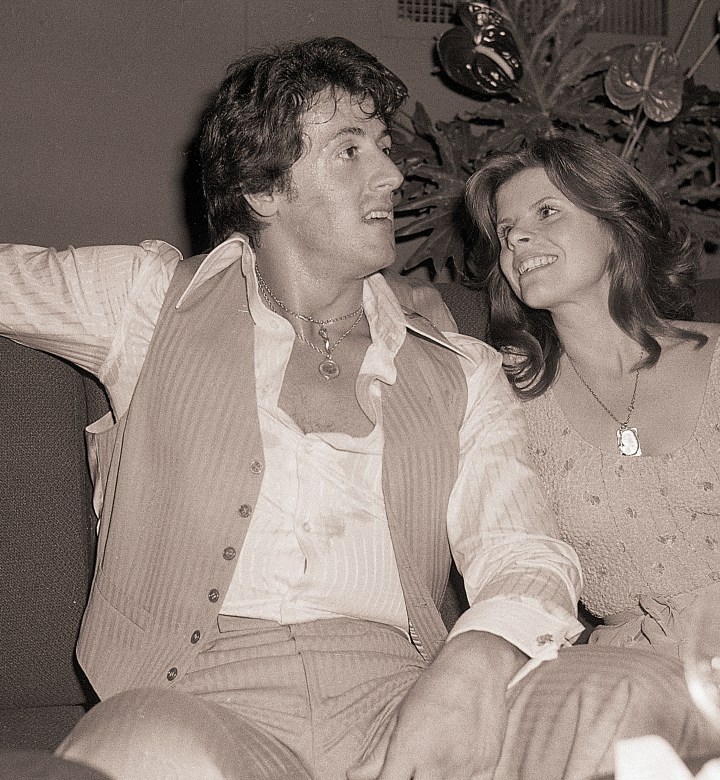 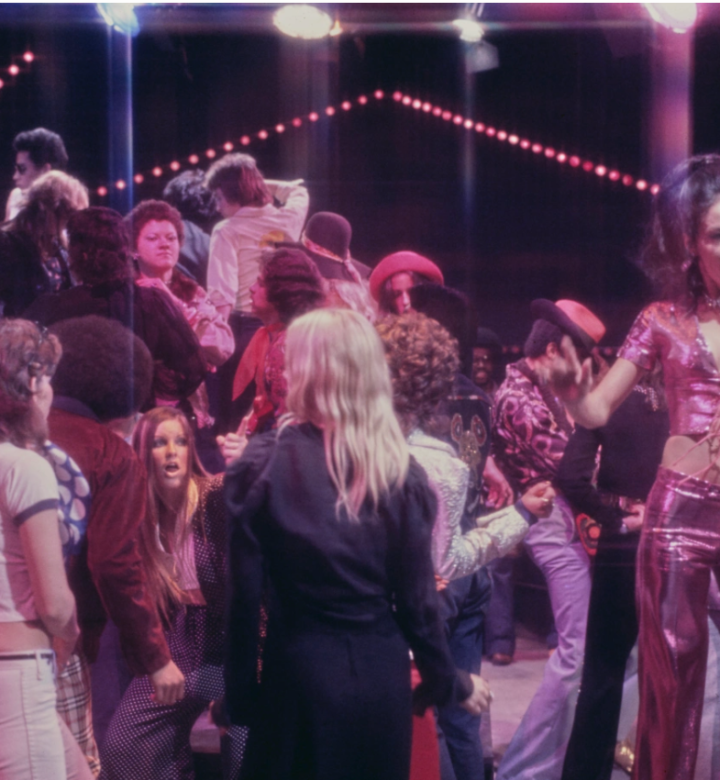 It’s important to note that it wasn’t just the celebrities that pulled up to Studio 54 in their finest outfits, but random clubbers as well. In fact, some clubbers were dressed more extravagantly than the celebs because as we mentioned before, celebrities were automatically let in, whereas the clubbers were held to extremely high standards. You can see some of their outfits in the picture above. 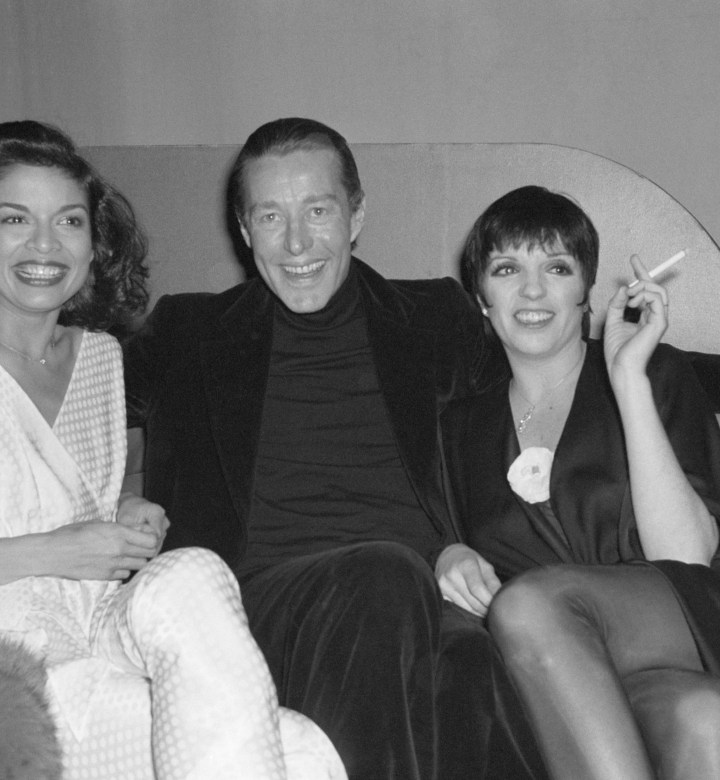 Another appearance from Bianca Jagger and Halston, who were dressed in formal attire alongside Liza Minelli, who was also a frequent visitor to Studio 54.

And if Bianca Jagger was present at Studio 54, then Mick probably wasn’t too far away. Here he can be seen rocking a white two piece suit in splendid Mick Jagger fashion. 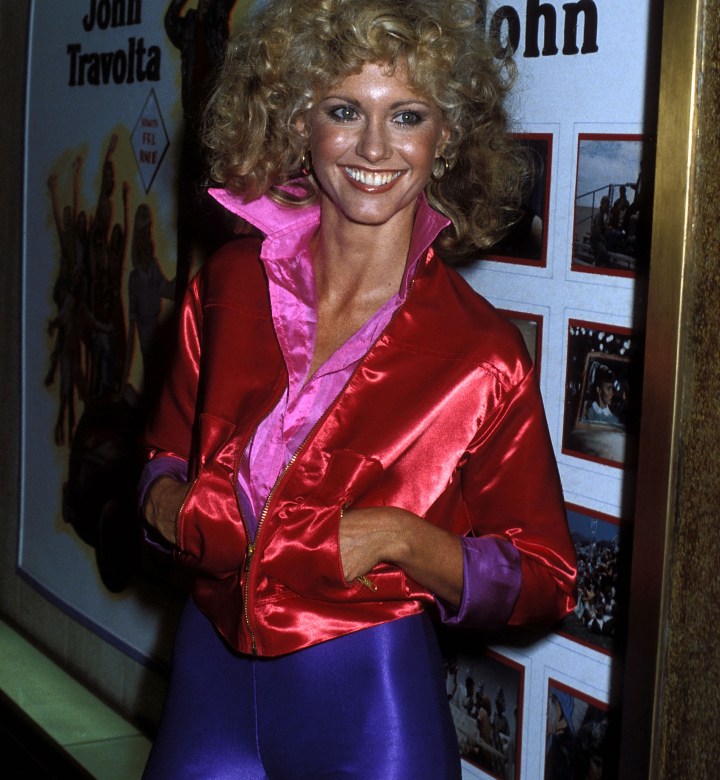 Apparently Grease had a special premiere of Grease at Studio 54, which we have to imagine was beyond lit. Here you can see Olivia wearing a red satin blouse with blue satin pants to match. 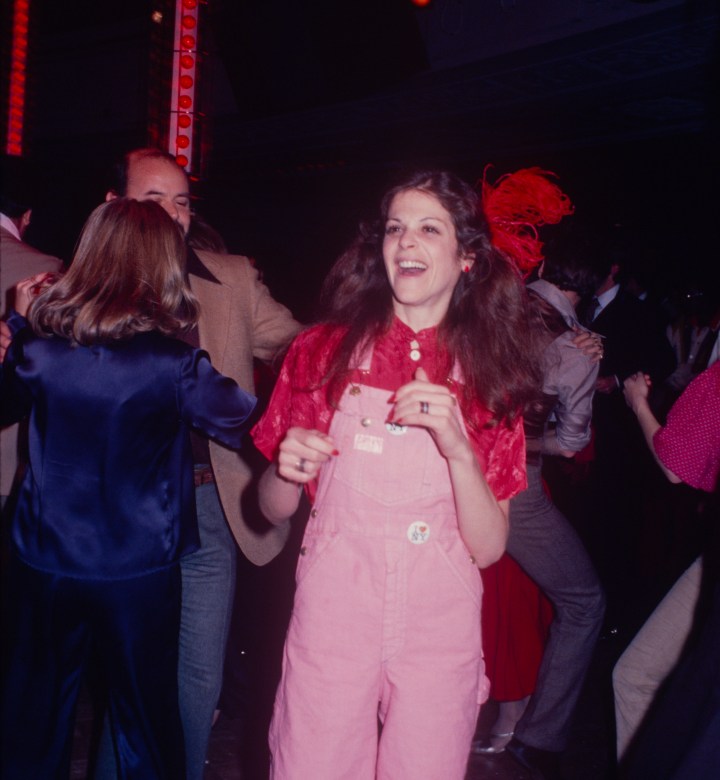 Actress and comedian Gilda Radner gave us something a little different upon her visit to 54 with the overall and t-shirt combo. Hey, it worked because she blended right on it with the rest of the crowd. 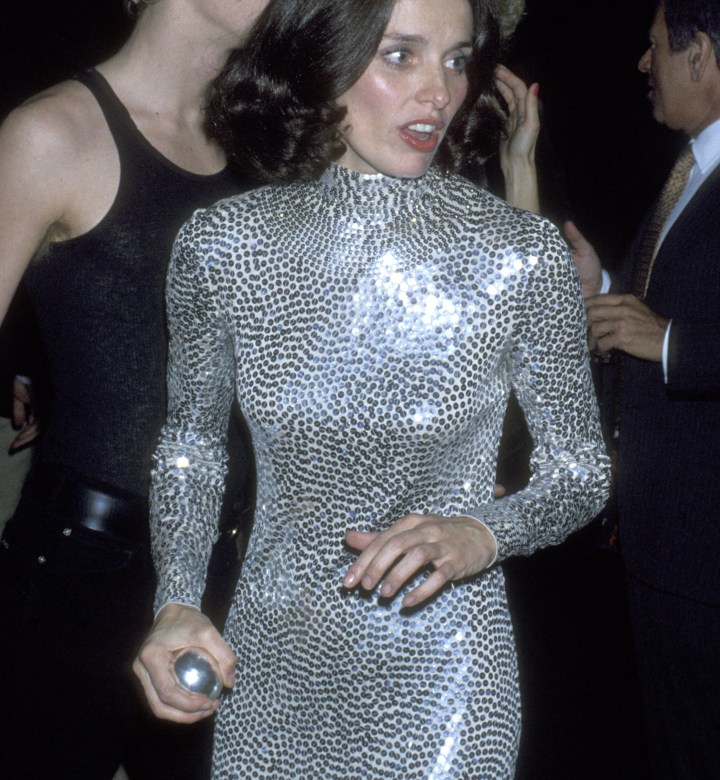 It’s quite cool seeing Margaret Trudeau in her party days, and this outfit was spectacular. We can only imagine how it looked amongst all the special effects and designs in the club. 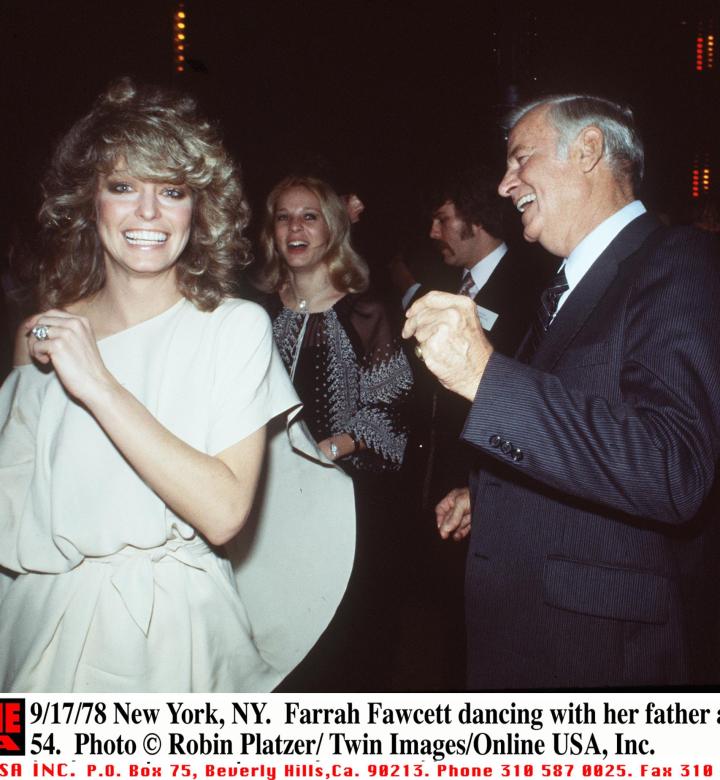 So as you can see, Studio 54 was poppin, and the best thing about it is that everybody genuinely had a good time. There were no phones and social media to document every moment, people just lived, laughed, and partied. Hopefully one of these days we can get back to that.